The DMG show in Sindelfingen, 2017

On September 10th, 2017, the German Messer Macher Gilde (Knife Maker's Guild) held its fall show in Sindelfingen, near Stuttgart. A European Blades reporter went to take a look and saw many fine knives.

For years, the German Messer Macher Gilde (Knife Maker’s Guild) has held two annual shows. The first in May, in the Blade Museum in Solingen, and the second in September, in Sindelfingen. The Museum in Solingen has taken over the organisation of the Spring show, which leaves the Guild to care for the Sindelfingen show.
Why Sindelfingen? That's simple. The founder and first president of the Guild lived in Sindelfingen. If you have never been: it is a pleasant city with a beautiful new ‘Stadthalle’ (a combination of theatre and reception hall), surrounded by hotels and some nice restaurants. European Blades Mag. was invited, was warmly welcomed, and was pleased to see some of the most beautiful knives. For those who have become curious: the 17th knife show in Sindelfingen will be held on September 9, 2018. 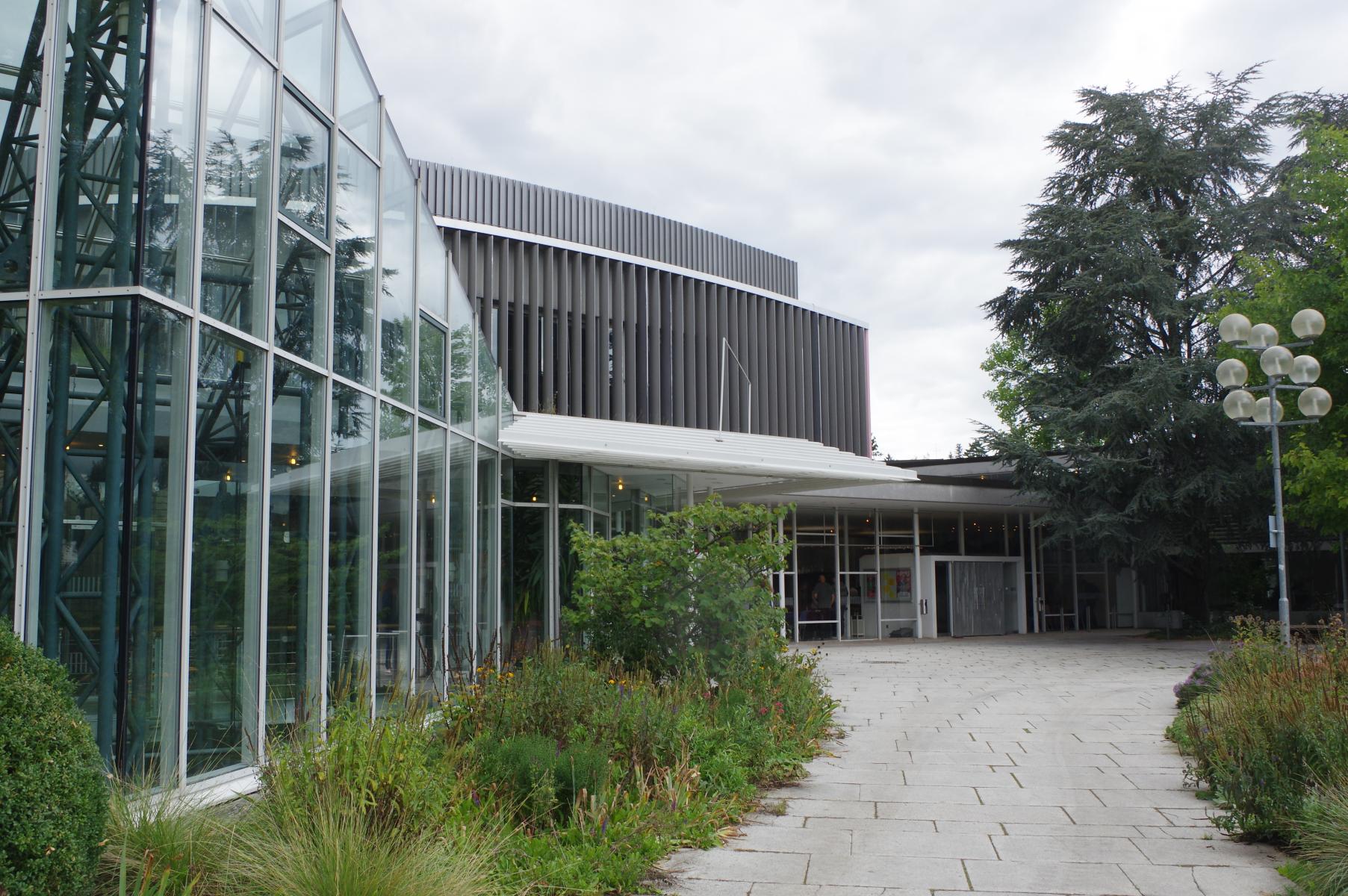 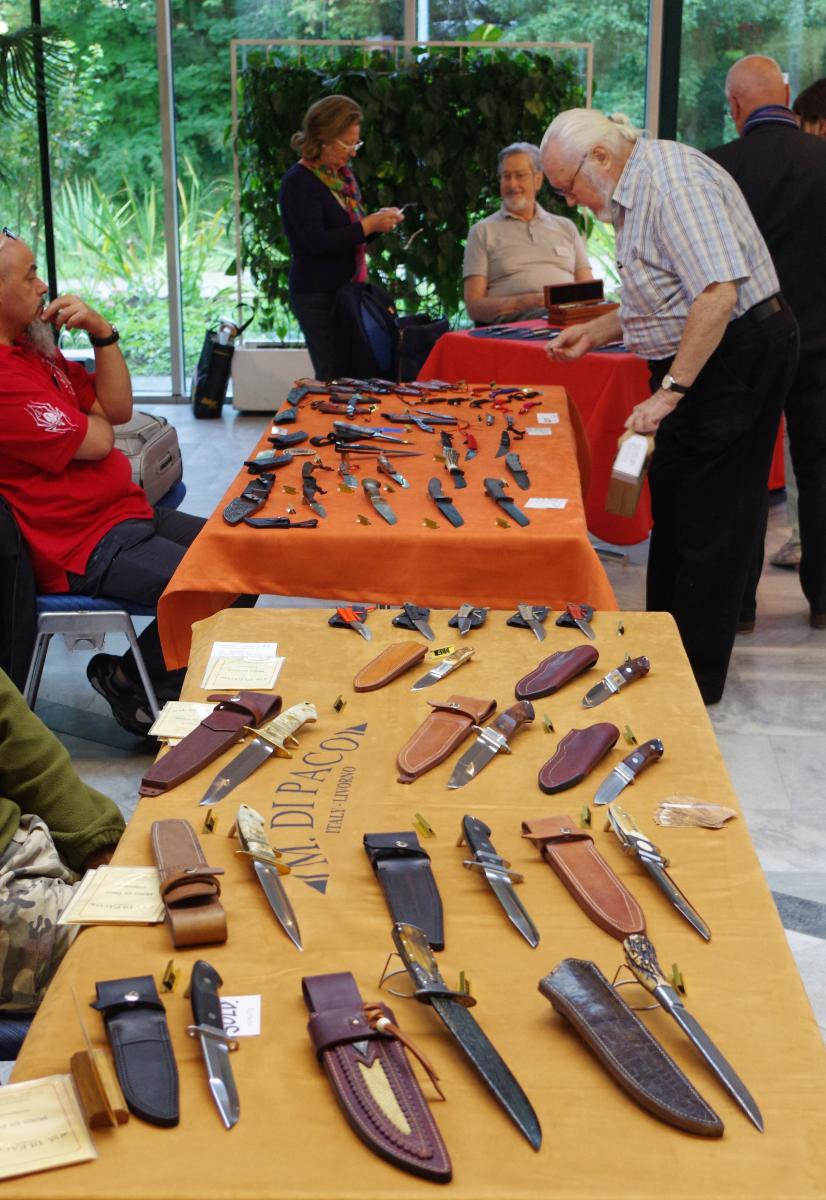 Left: The ‘Stadthalle’ in Sindelfingen, a combination of theatre and reception hall. The exhibition of the German Knife Maker Guild is held in the spacious walkways. Right: A corner of the Sindelfingen knife exhibition. 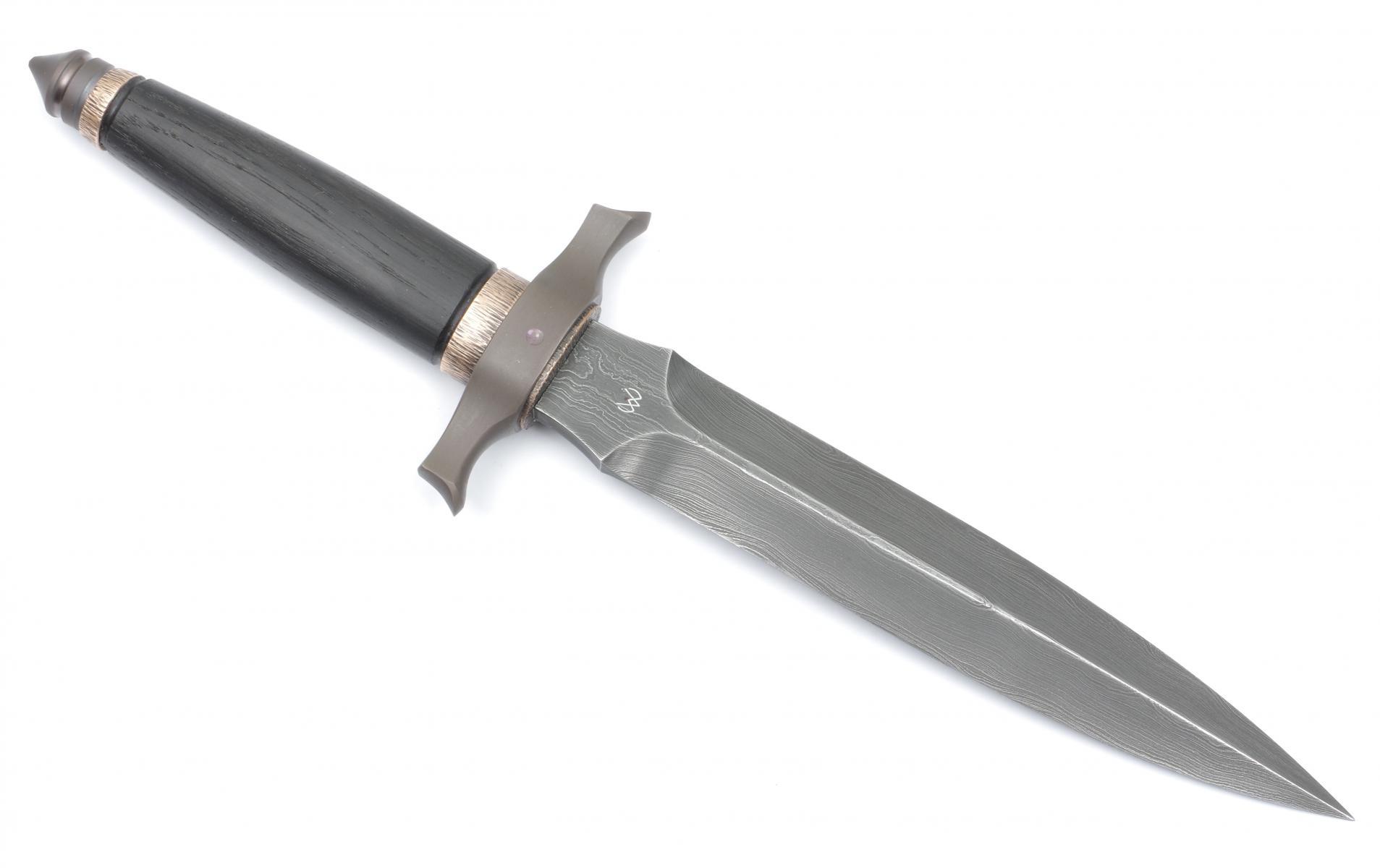 A dagger from Metin Anan. The blade is made of Balbach Leo 4 damask,
the handle is made of bog oak and titanium bronze.
The length of the dagger is 310 mm. 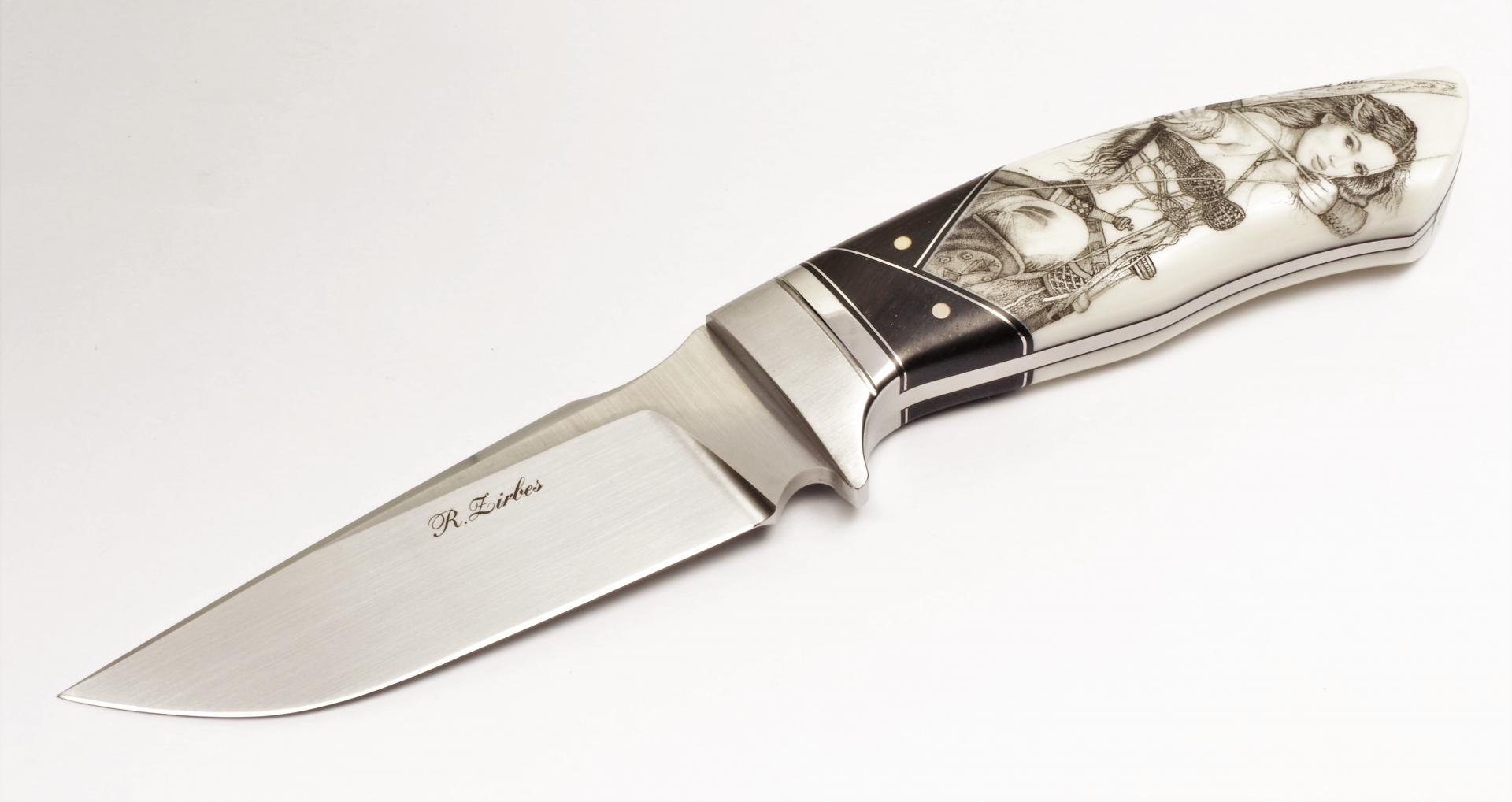 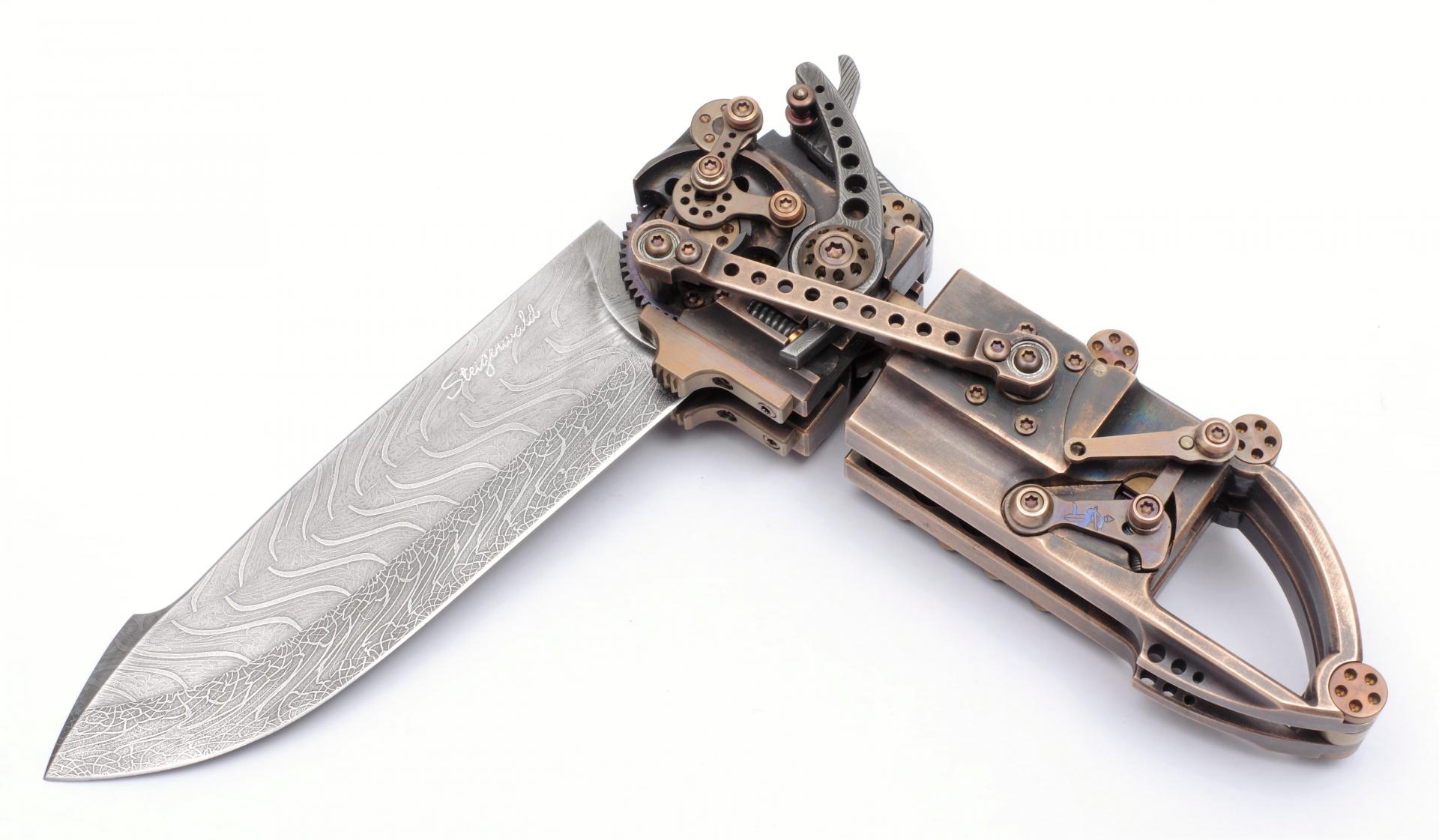 Left:
Lately, Richard Zirbes is involved more with scrimshaw than knife making. His preference goes to lightly erotic motives, and he is doing well. This knife is called the ‘Amazon’. The blade is made of ATS34, the handle of so-called duro-ivory, ebony and silver. The knife is 219 mm long.
Right:
A steampunk knife by Stefan Steigerwald. The starting point was to make a folding knife with blade and grip as long as possible. This means that the handle can slide out. The blade is Jörg Heckel damask, the grip of bronze, steel and titanium. The knife has two iris diaphragms, a turbine, levers, and a box for gold coins. 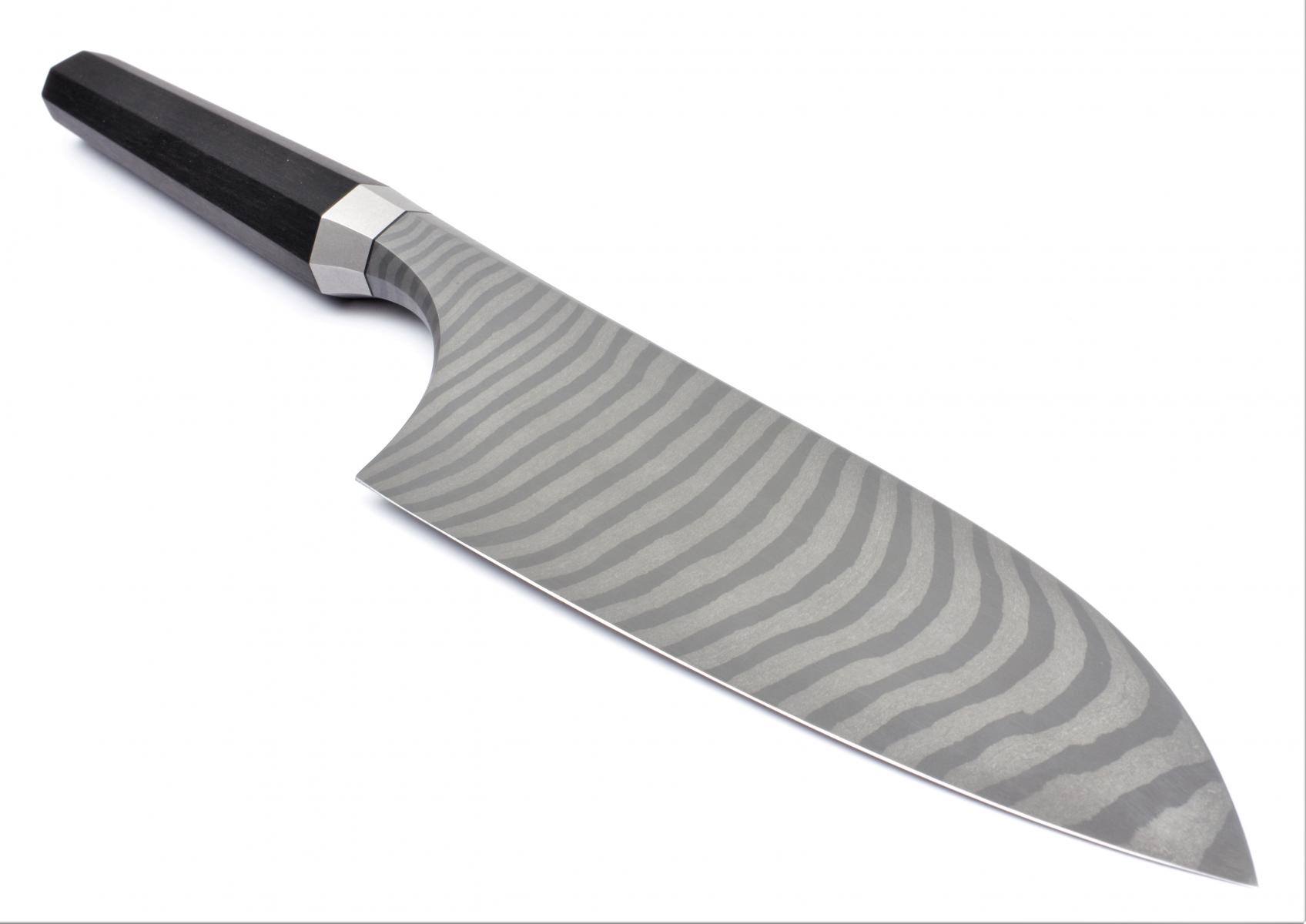 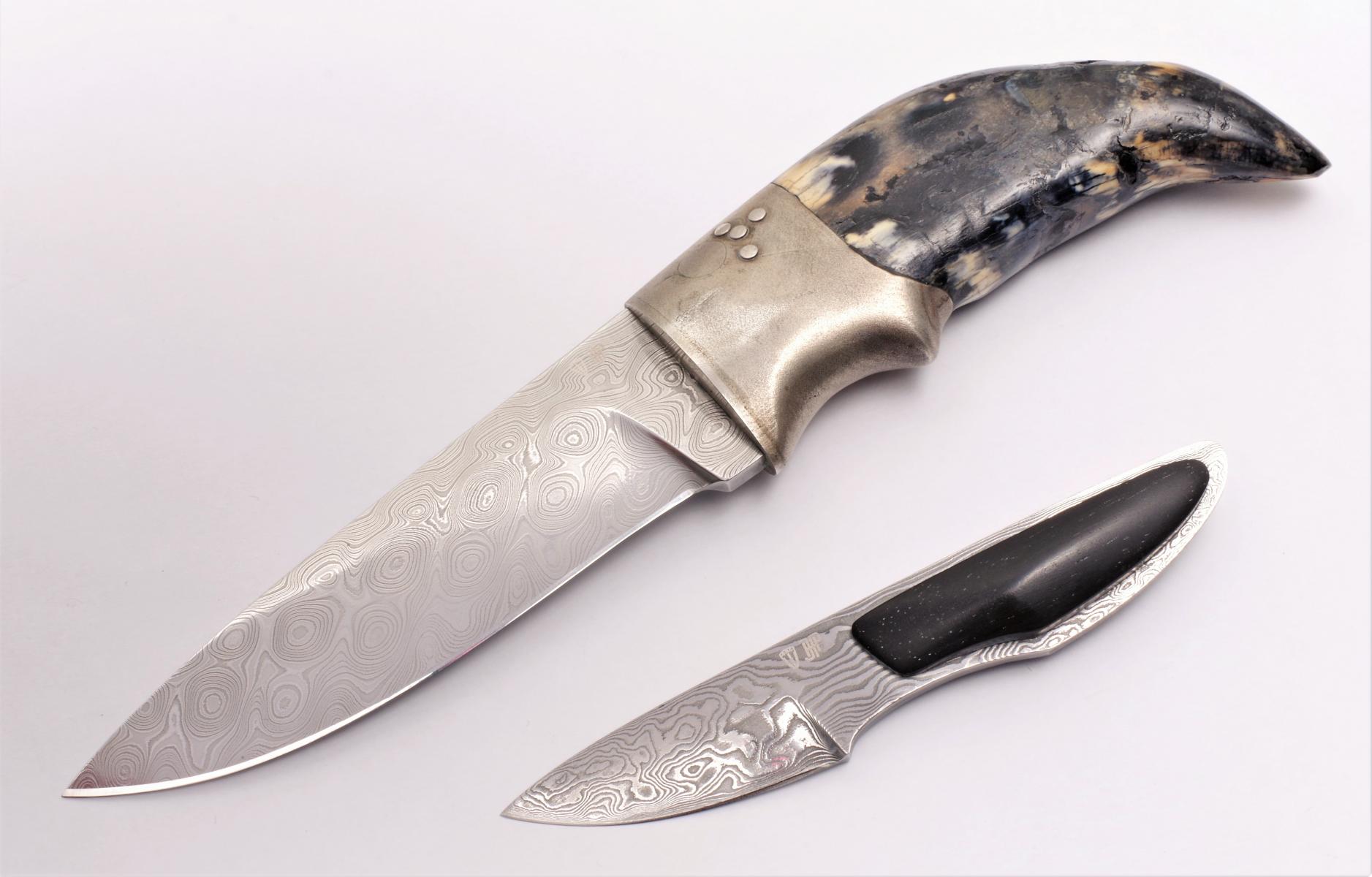 Left:
Gunther Löbach (Sorpio Design) has a very distinctive style. This is his Silver Kitchen Mistress IV - we would not object to having her around! The blade is made of Balbach DSC stainless damask, the handle is made of stainless steel and ebony wood. The length of this beautiful kitchen knife is 29 cm.
Right:
Two knives by Joe Pöhler, president of the German Messer Macher Gilde. Above, the 230mm long Papa Bear with a blade of Balbach stainless damask and a handle made from a 30,000-year-old piece of bone from a cave bear. Below the ‘Knudel’ (120 mm long) with a blade of Balbach damask and a handle with grenadille (African Blackwood).

Left: A fixed knife by Lothar Kröger with a 75Ni8 and 90MnCrV8 damask blade and a handle of stabilized wood.
Right: A fantastic integral knife by Wolfhard Sollorz. The satin blade and grip are of RWL 34, with an insert of mammoth teeth. The sheath consists of two halves of stainless steel with a lining of microfibers. The total length
of the knife is 200 mm. 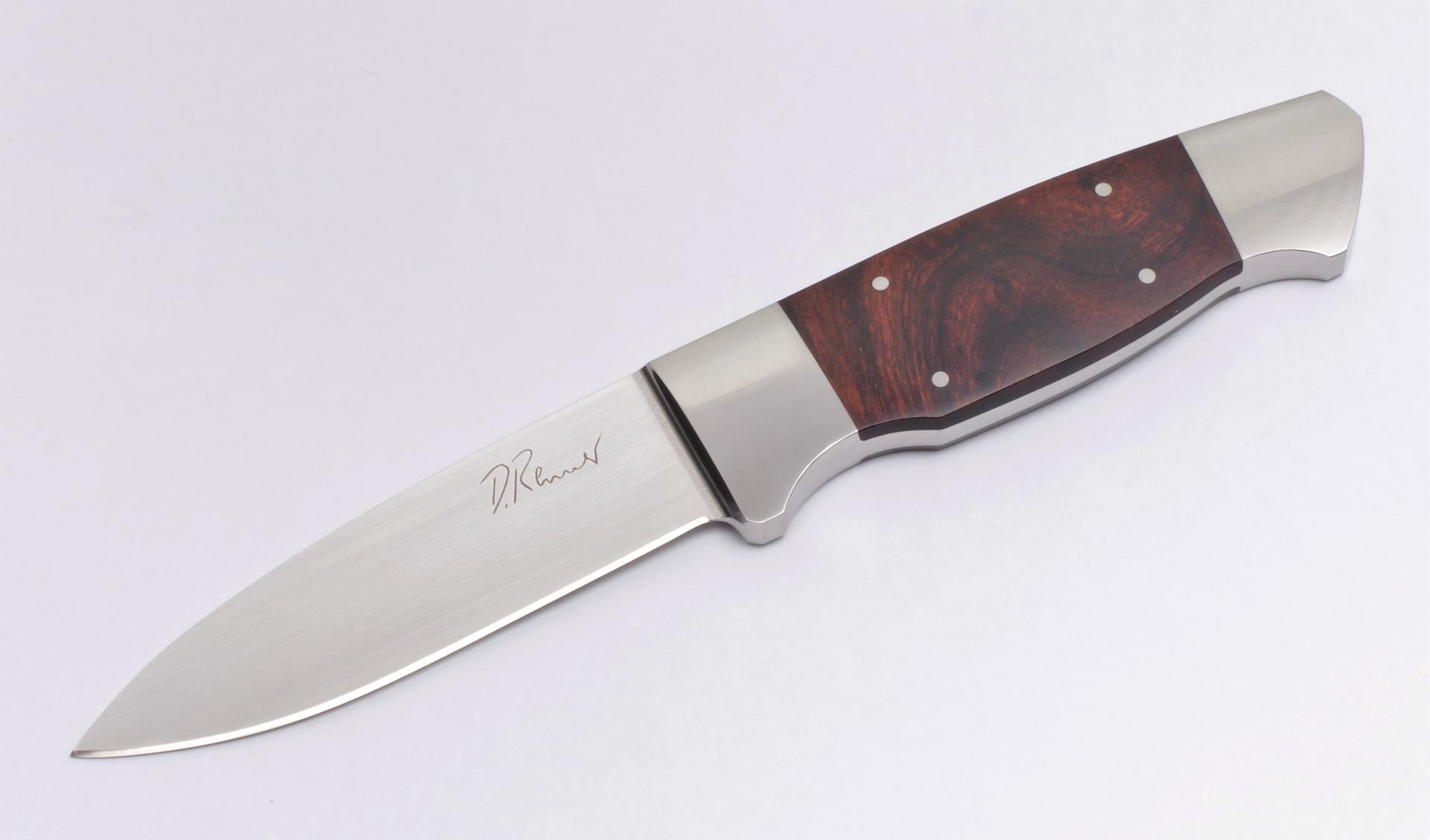 Left: The E20 by Daniel Renner. The integral knife is made of M390 PM, with grips of ‘Desert Ironwood’. The finish is perfect. Right: A graceful kwaiken by Italian knife maker Denis Mura. The 440C steel blade has a Diamond-Like-Carbon (DLC) coating. The grip has ray skin and cord. The length of the knife is 24 centimetres. 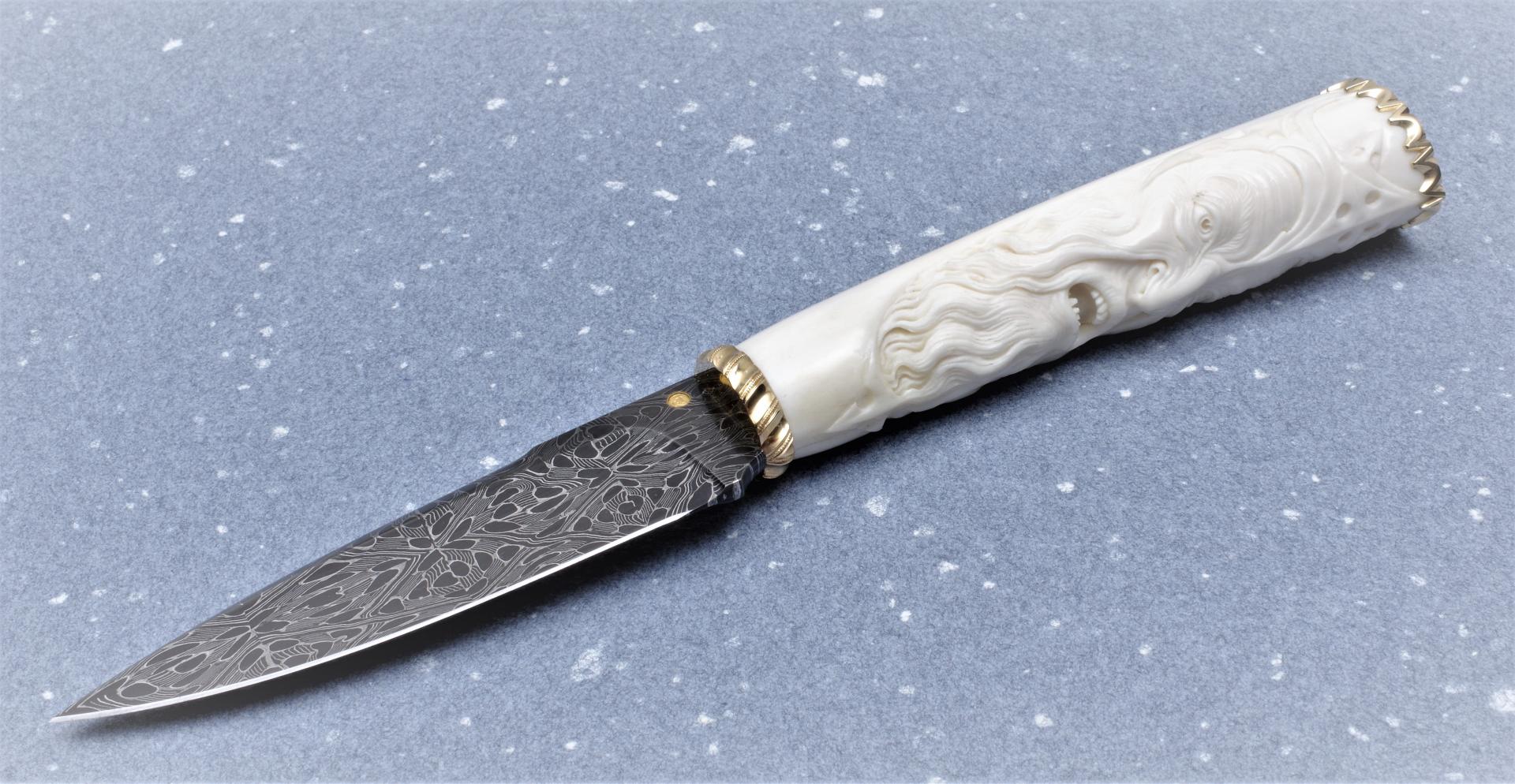 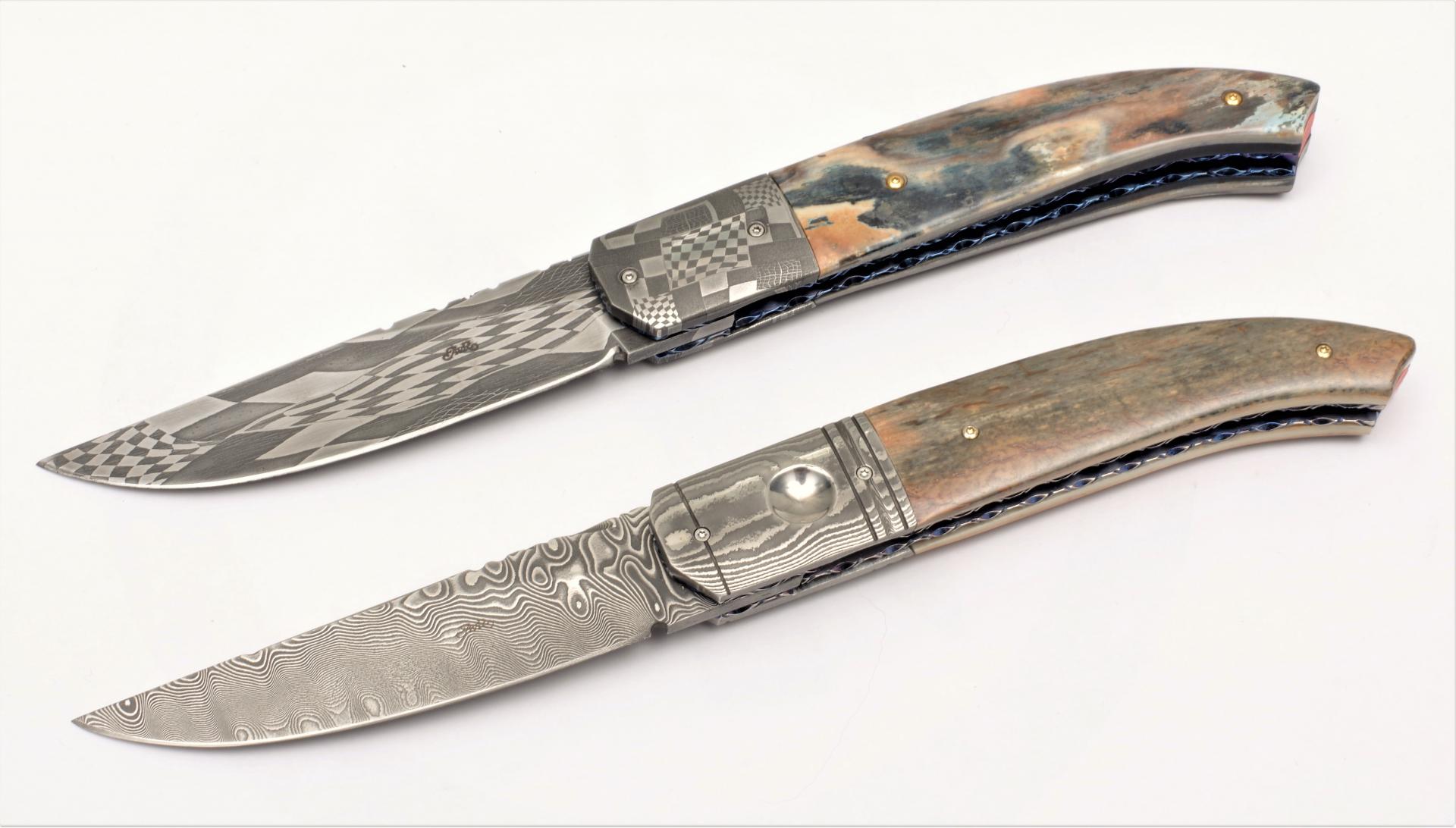 Left: Reinhard Tschager calls this knife "The White Devil". The cut handle of stag he once bought ready-made,
and he does not know who made it. Tschager took care of the golden fittings, and a blade of Chad Nicol's
damask. The length of the knife is 212 mm. Right: Two liner lock knives by Aad van Rijswijk. The upper knife has a blade and bolster of Uwe Heieck damask and a grip of mammoth ivory. The lower knife has a blade and a bolster of Schneider damask and also a grip of mammoth ivory. Both knives are 22 cm long when open. 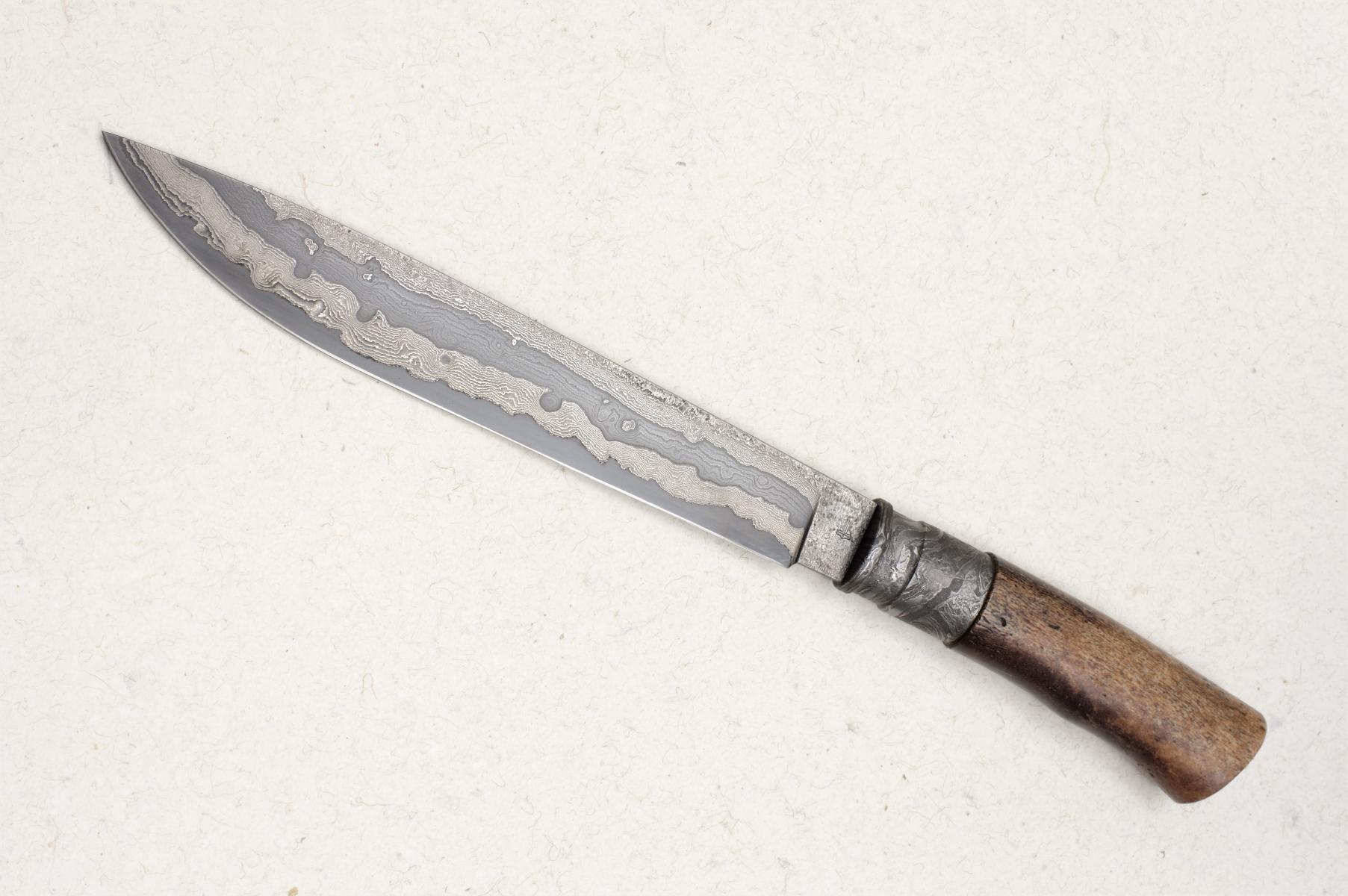 Left:
The 'Wild Cat 17' by Carlo Trevisi. Blade and pliers are made of 440C steel. The grip is of mammoth ivory and
the bolsters are engraved and lined with gold by Lionello Sabatti. The knife is 219 mm long, with a blade of 106 mm.
Right:
A fighter by Thomas Hauschild. The blade of the knife is impressive and 1.2442 C100 / nickel damask. The
bolster is wrought iron and the grip is made of sea cow bone. 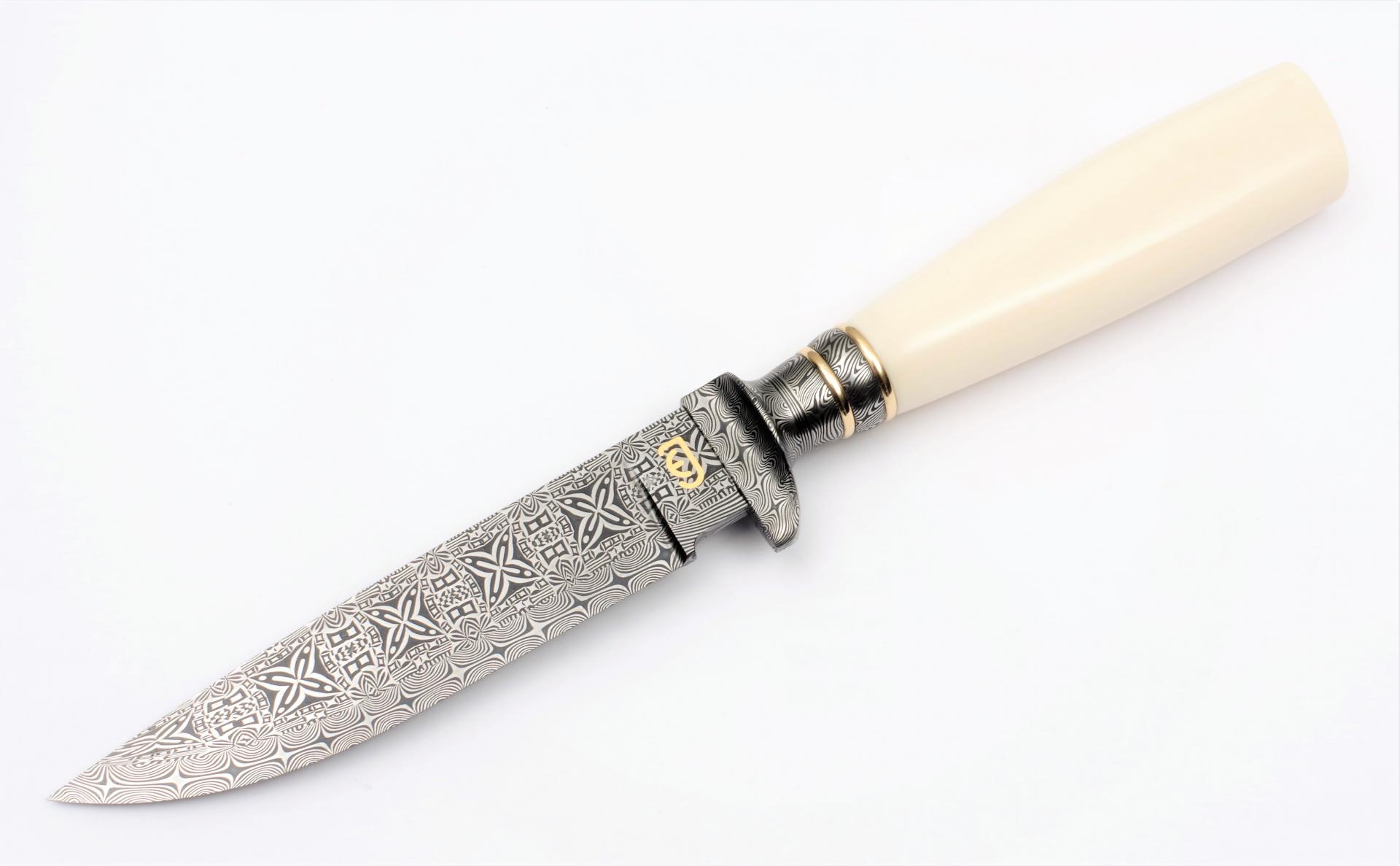 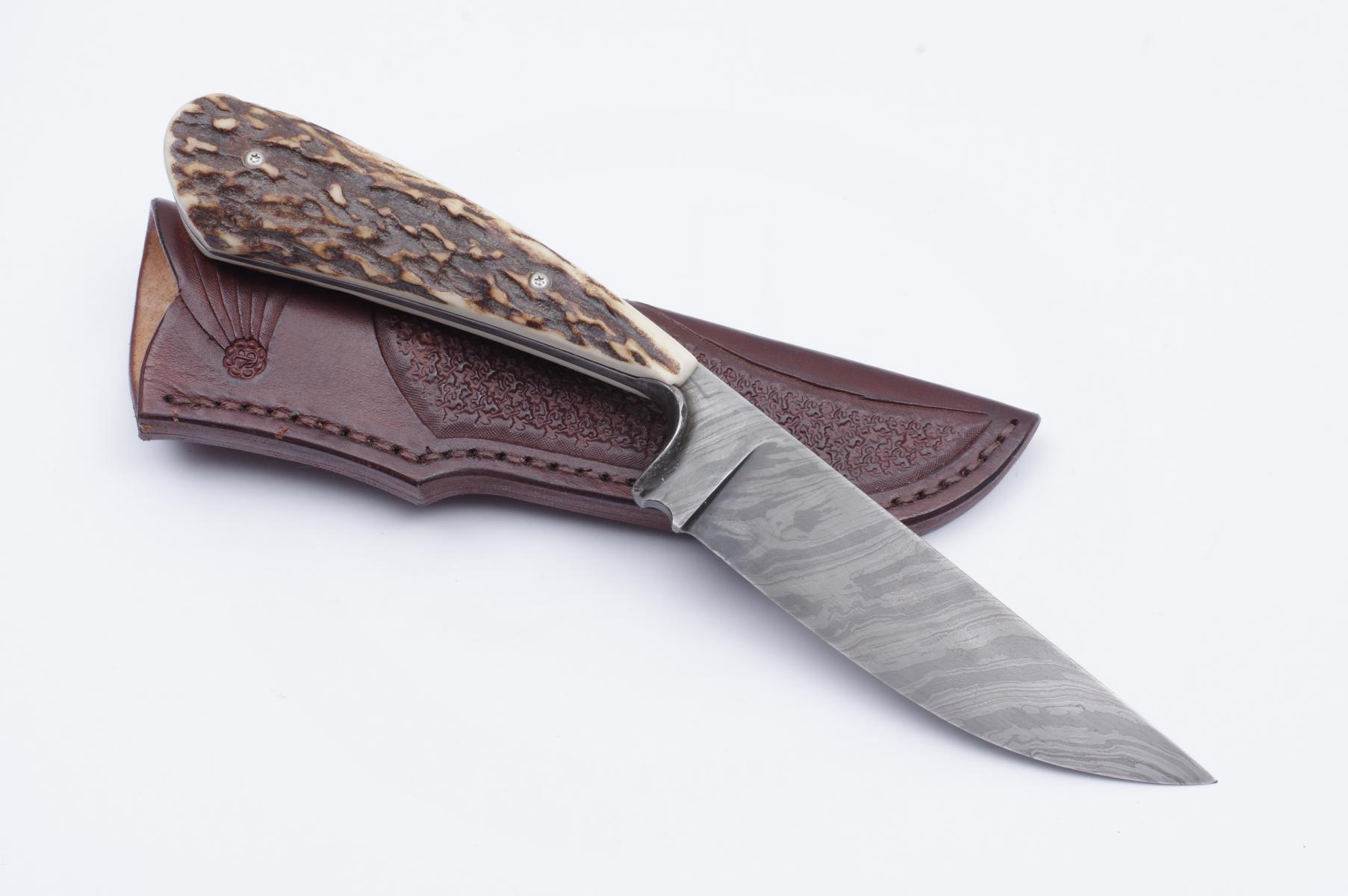 Left:
Johannes Ebner is famous for his amazing damask motifs. This Nicker (a classic German hunting knife) has a knife and guard of Ebner mosaic carbon damask and a grip of mammoth ivory. The knife is 26 cm long.
Right:
A hunting knife by Hans Weinmueller, forged in the style of Joe Keeslar. The blade is made of 1085 steel chain saw, the grip of stag. 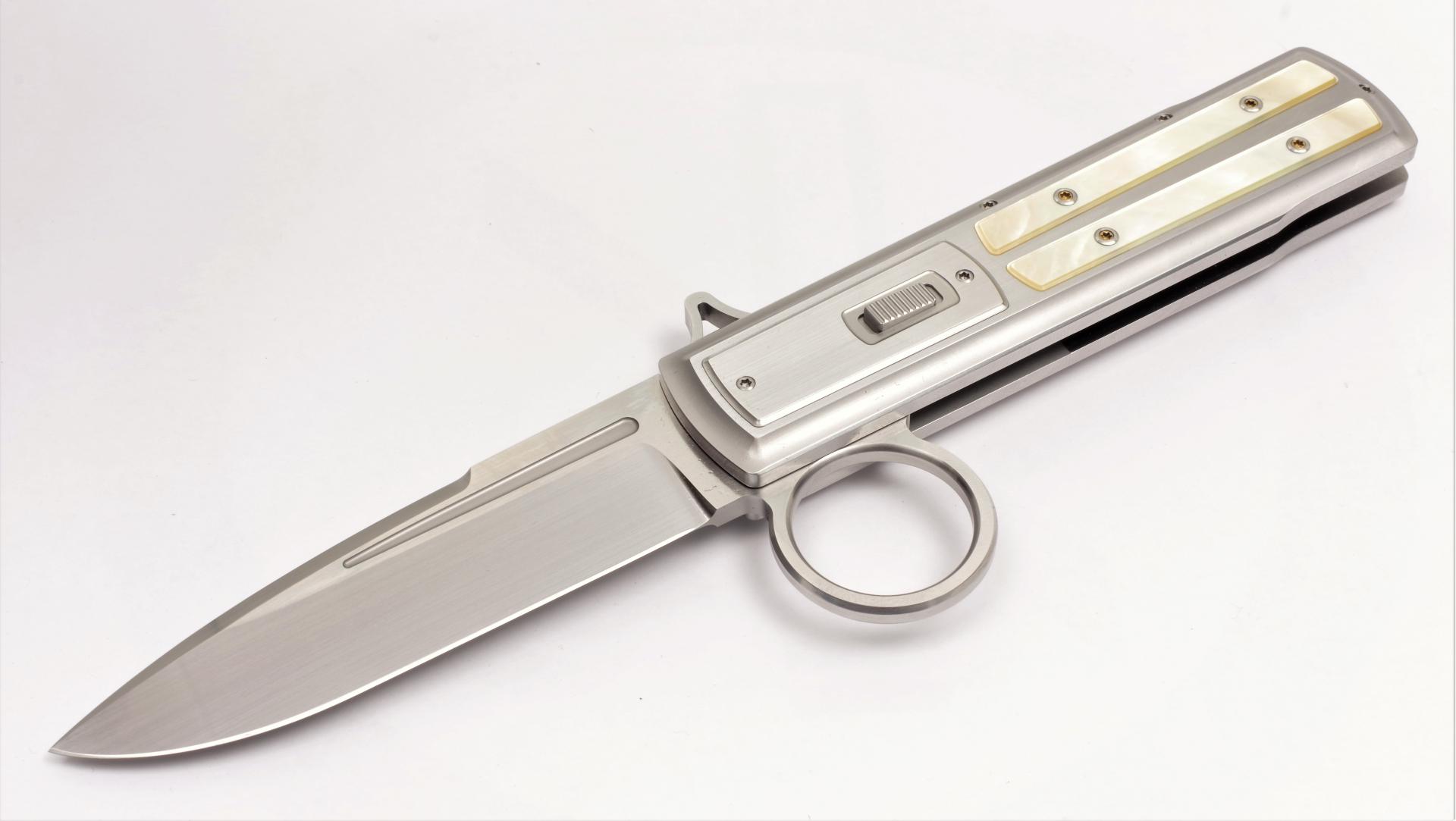 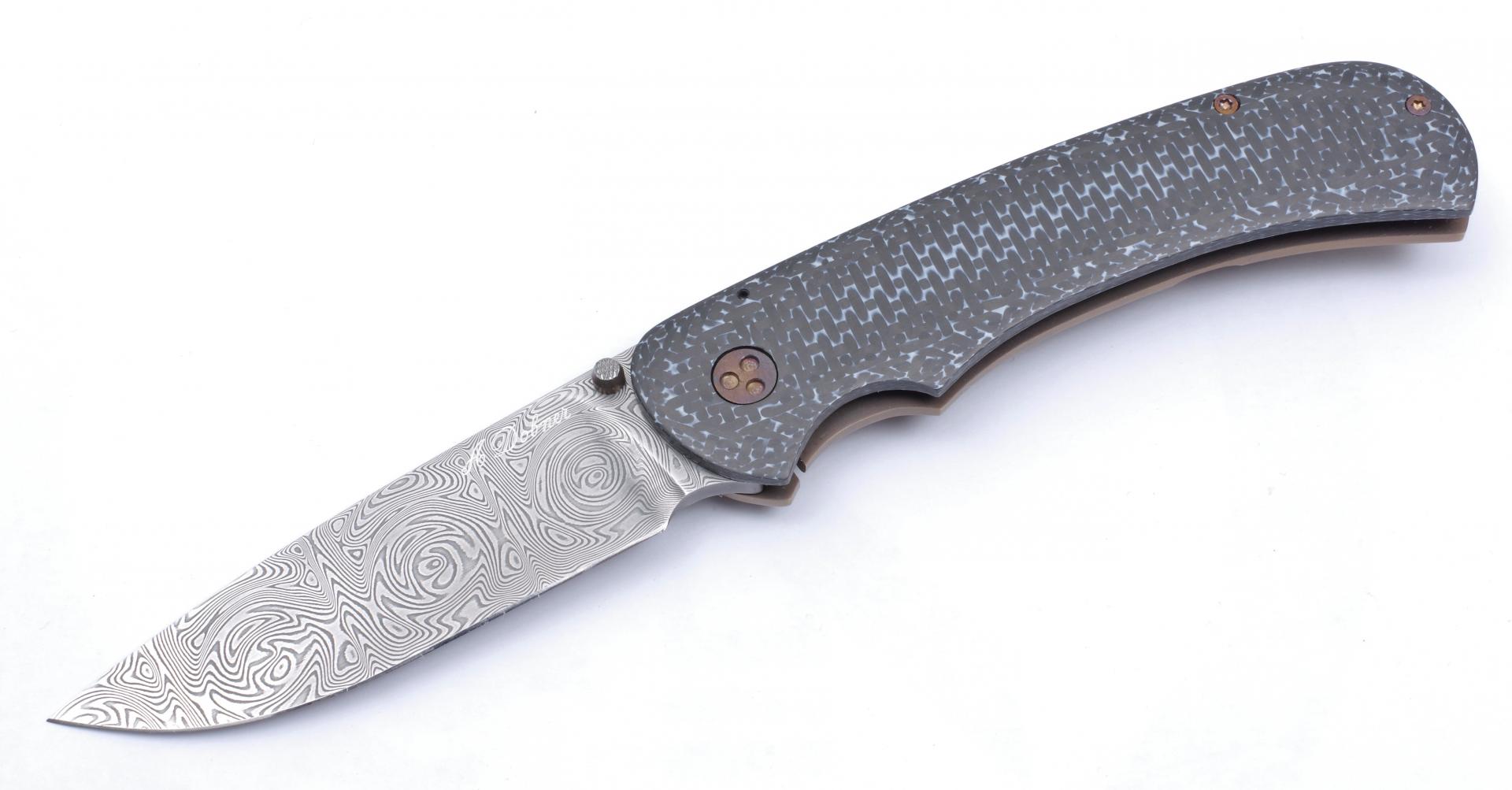 Left:
In our opinion, this knife by Heinz Kocher was one of the highlights of the DMG meeting. A folder with a slider, which has to be pushed forward to release the blade. The latch works in both opened and closed m e s. The blade is Elmax Super Clean, the handle is made of hardened steel and 1.4034 Goldlip mother of pearl. With the knife open it is 210 mm long.
Right:
An ‘Every Day Carry’ (EDC) by Alfred Dobner. The blade is made of Balbach stainless steel. The left grip is carbon fibre, the right is made of bronze anodised titanium, with a titanium bearing clip. 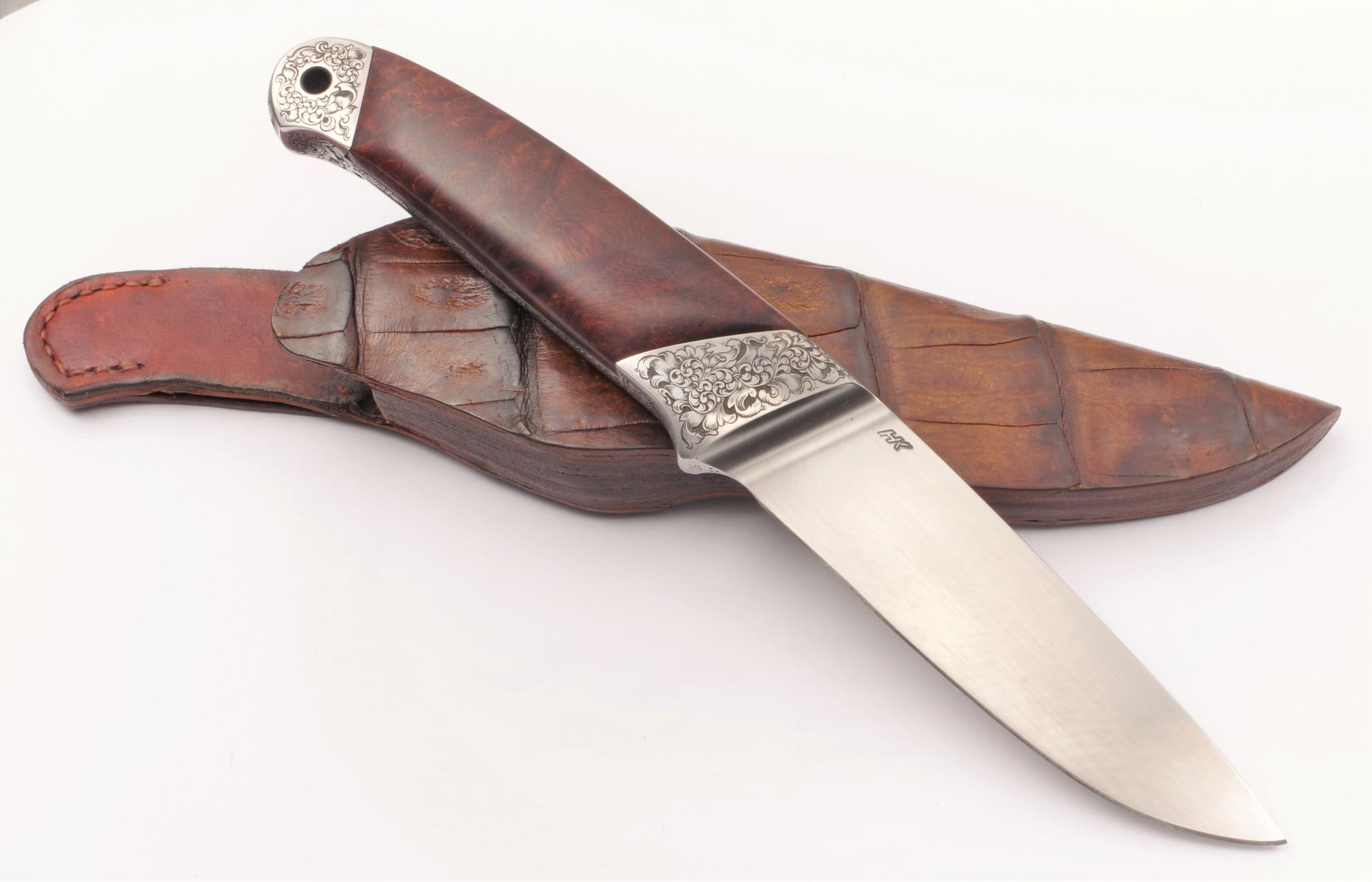 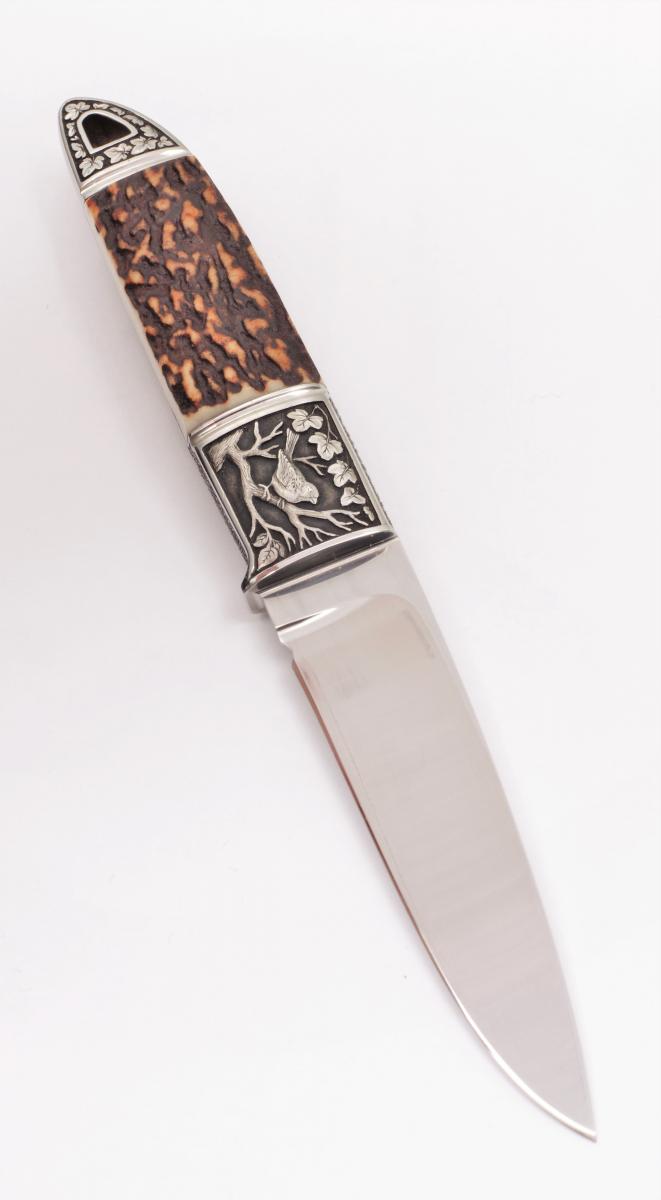 Left:
A solid hunting knife by Helmut Klein. The blade is made of stainless damask steel, but Klein did not etch intentionally. The grip is from Desert Iron and the bolsters have a Renaissance engraving by René Funk. The knife is 22.7 cm long.
Right:Sipi Rinkes called it a ‘three-finger knife’ because of its modest dimensions. The total length is only 185 mm. The blade is RWL 34, the handle is made of stag horn and bolsters are engraved with pictures of sparrows by Gerd Rausch. 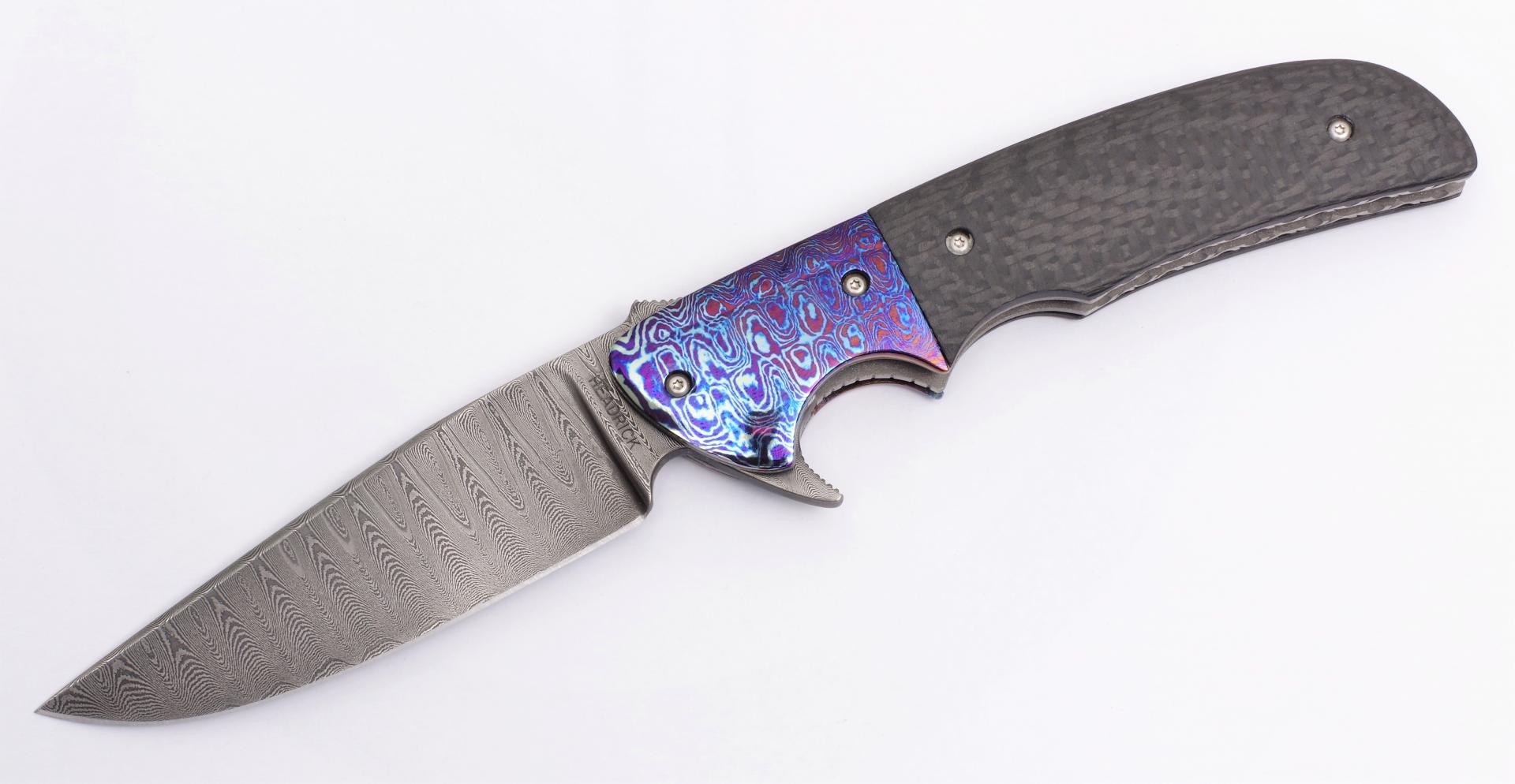 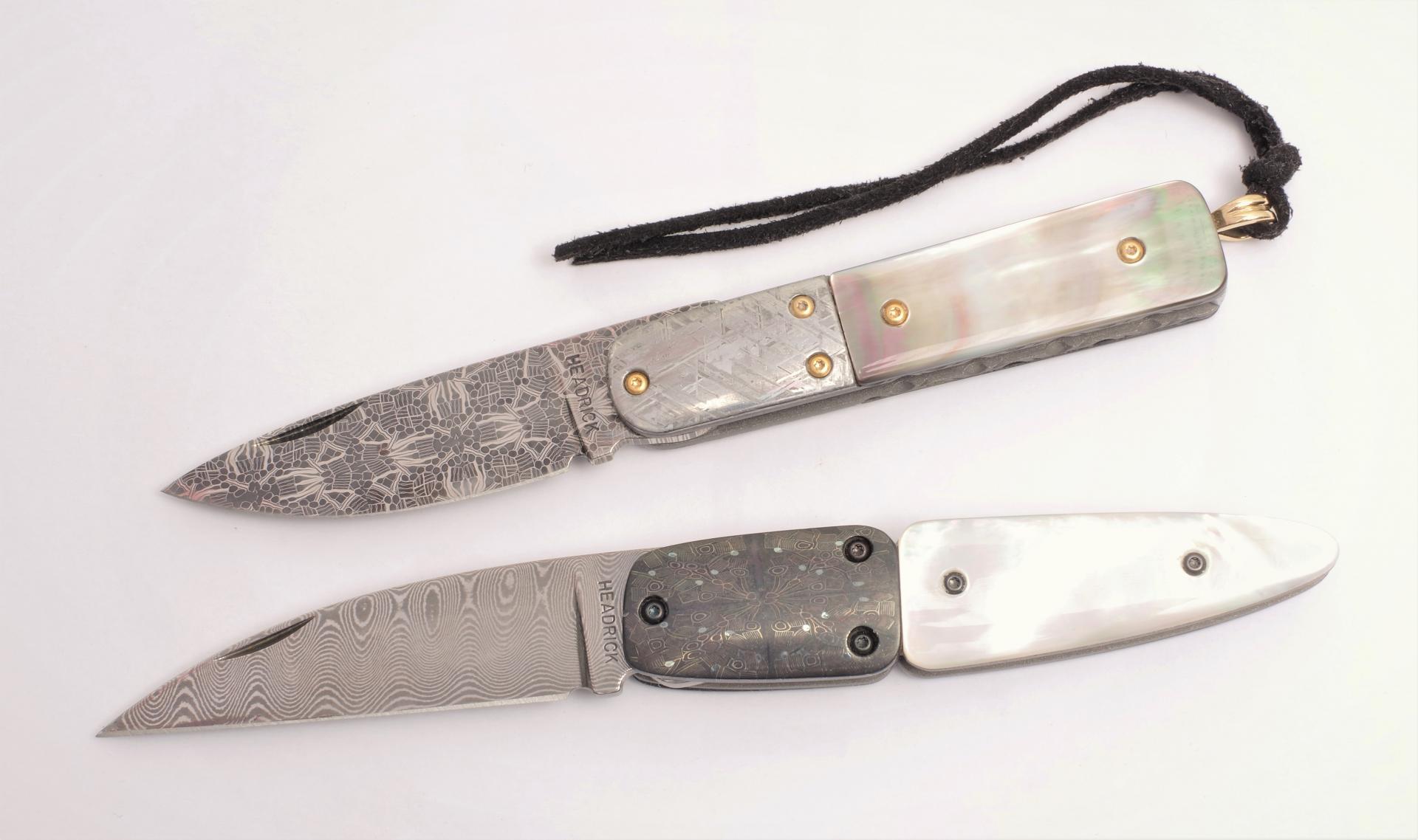 Left:
This knife by Gary Headrick is called the ‘Proto Carbon’. The blade is made of carbon damask Daniel Vally, the grip of aviation carbon fibre and husks of blue Timascus, or titanium damask. The opened length is 215 mm.
Right:
Two lady’s knives by Gary Headrick. The upper knife has an American mosaic damask blade, a titanium chassis with file work, meteorite bolsters and handles of black pearl nut with a golden string. The length is 155 mm. The lower knife has a blade of Friedrich Schneider damask, a bolster with mosaic damask by Christian Penot and handles of white pearl. The opened length is 175 mm. 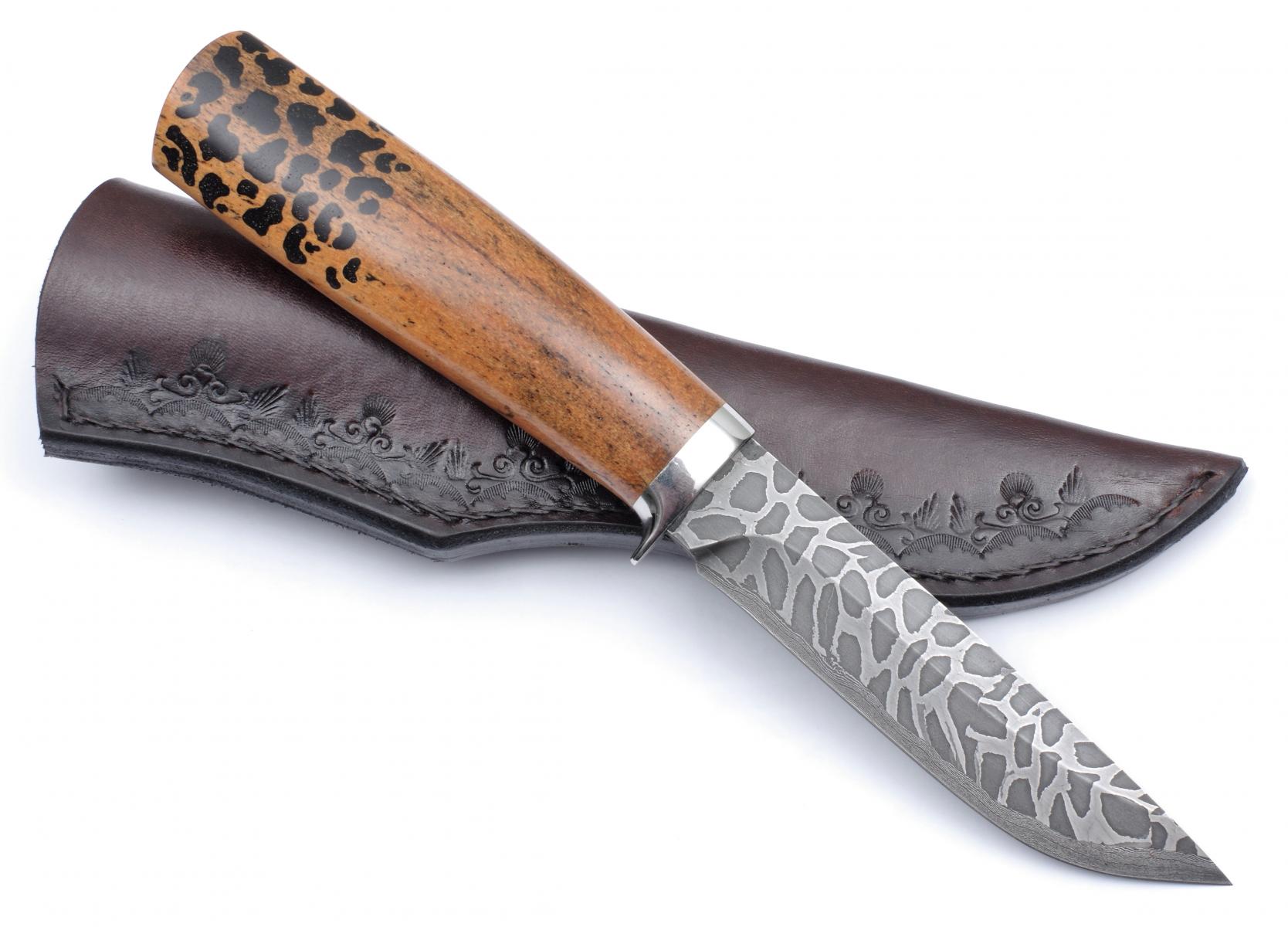 Left:
The 'Karud' by Polish knife maker Robert Lazinski. The blade is made of carbon mosaic damask. The grip is of almost translucent stabilized mammoth ivory.
Right:
Hungarian knife maker József Fazekas made this Tiger/Leopard knife. One side of the blade has damask in Tiger pattern, the other side in Leopard pattern. The patterns are reflected in the wooden handle.
Our sponsors
Advertisements
Dit is een geprinte versie van de publicatie op