We are close to Valtrompia, the Italian valley for arms factories. Specifically, eight kilometres from Ome, which is the area that interests us, lies the oldest arms factory in the world, Beretta, which has existed almost 500 years. Documents indicate that in 1526, Bartolomeo Beretta delivered a supply of gun barrels. Well, 96 years before then, iron was forged in Ome.

The first known indication of iron forging in Ome dates back to 1430 and was found, as graffiti, on a wall of the building during a restauration. It indicated that the hammer was already present here when Cristoforo Colombo and Leonardo da Vinci were still waiting to be born. The seventeenth-century forge structure remains intact to this day. Seventeenth? Yes, because there are no drawings of the previous lay-out. Although, it would not have been very different to earlier versions. 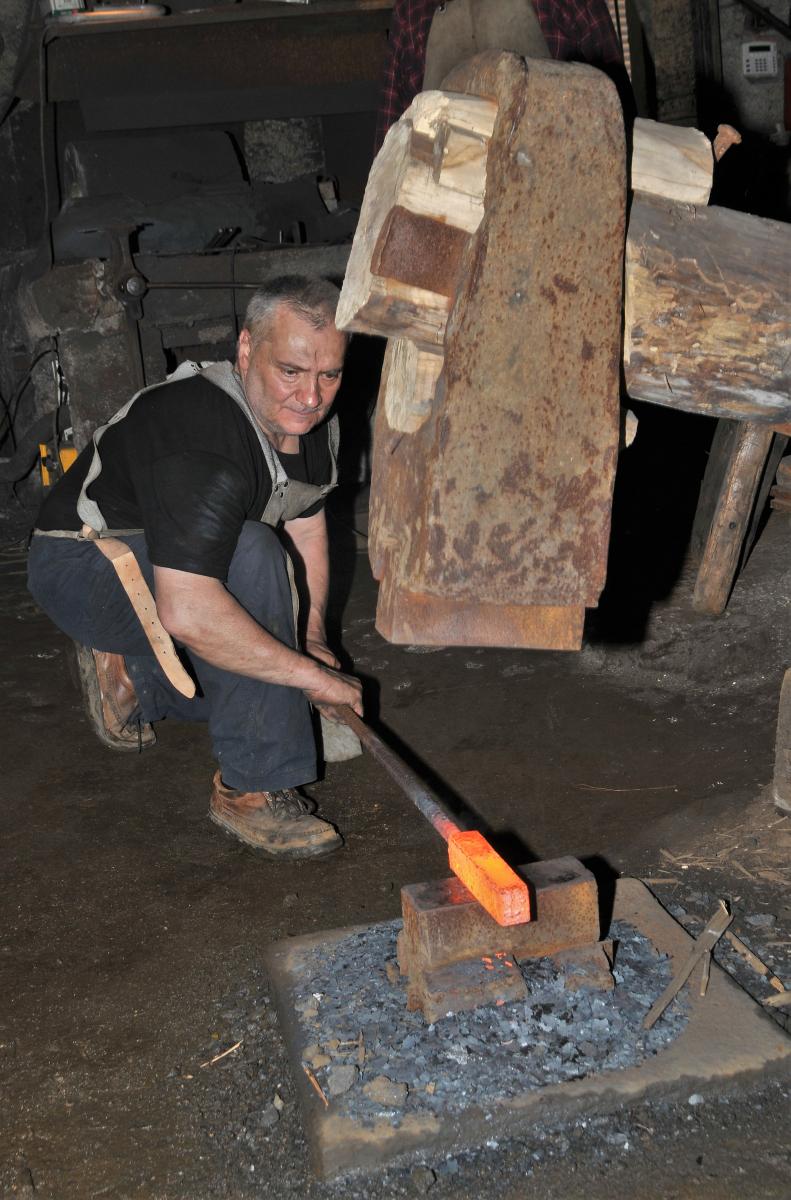 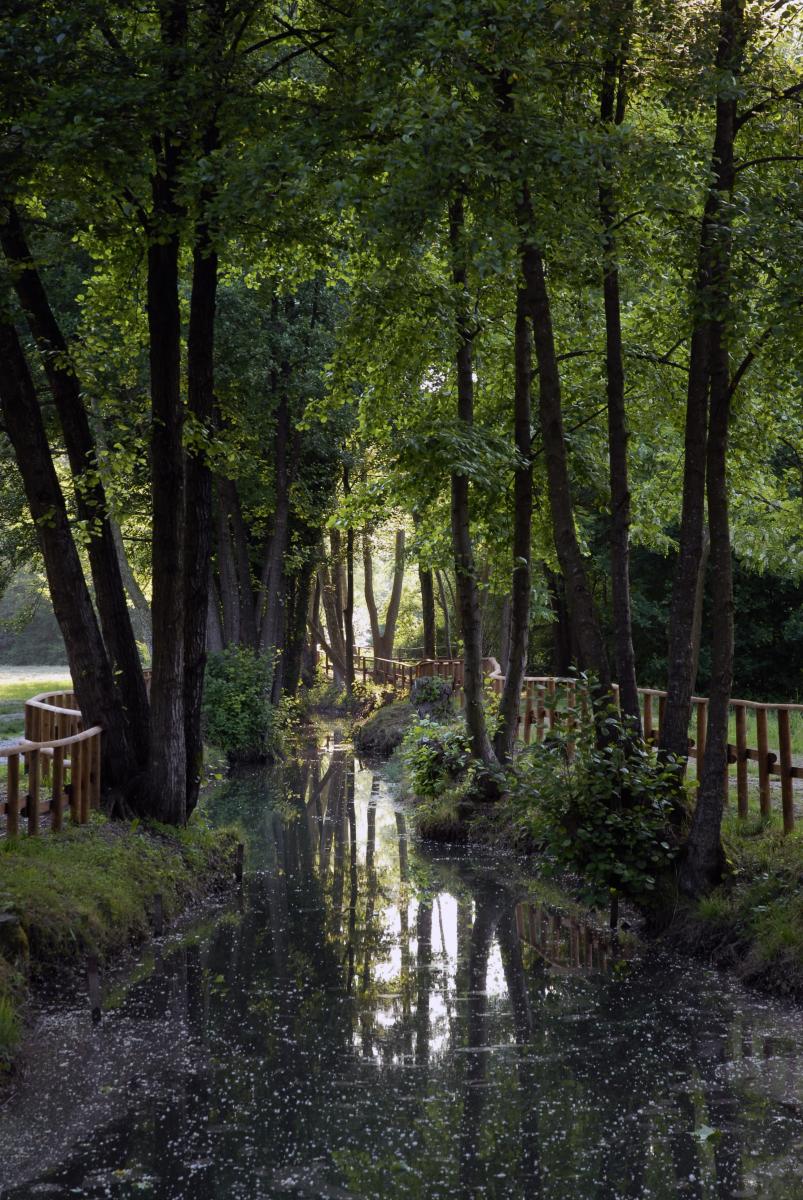 Left: The forge in Ome, Italy, dates back to 1430. The present lay-out dates back to the 17th Century at
least, but may be a lot older. This is Italian knife maker Dario Quartini forging.
Right: The waterwheel and hammer are powered by this friendly-looking stream.
However, the Averoldi mill at Ome and its impressive helve hammer, is not only an extraordinary example of an industrial facility which has been well-preserved. Nor is it simply a testimony to Brescia's industriousness. That forge is also, perhaps most notably, the meeting place of one of the most extraordinary stories in the world in the processing of iron and the characters that belong to this world.
In the mechanized industrial tradition, you can find hydraulic-powered machines going back centuries. Not just the helve hammer, but the pulleys are moved by water that uses flat belts to operate the wheels, the cutter and the drill. The dawn of the industrial revolution has left a mark here that dates back to the fifteenth century.
There are other “machines” in Ome that may never be put back into operation. A second water wheel feeds a shaft with pulleys by means of a flat belt. From there, always using the flat belts, the motion carries to other machines. The pins of the stone wheels are gone. The wheels are twisted, good at best, for the edges of a hoe. However, these simple machines could be put back into operation, to have complete processing on the site, if the Superintendence of Antiquities would only understand the importance of replacing the lost brass.
Alongside the helve hammer there was the mill which was lost unfortunately. The mill worked at night, during the day the water was used by the far noisier hammer, that forged agricultural tools. At night, that same water was used to process agricultural products, the harvest. 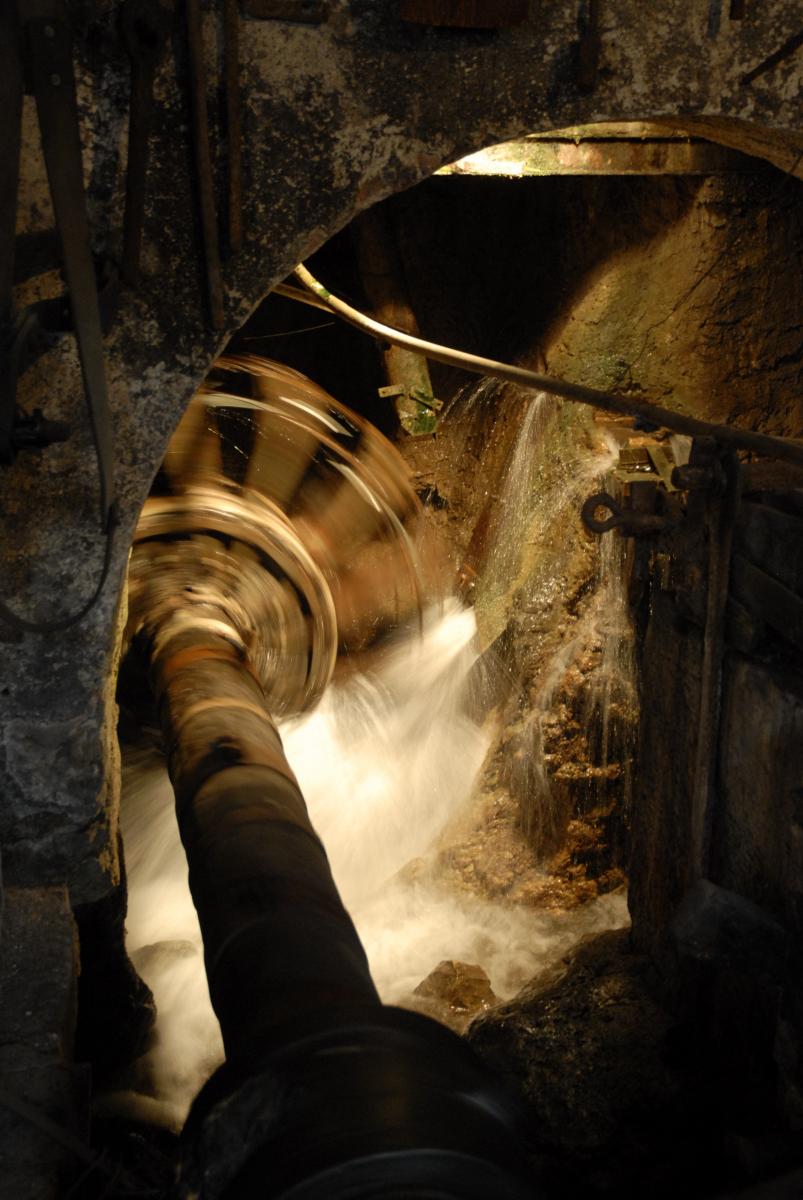 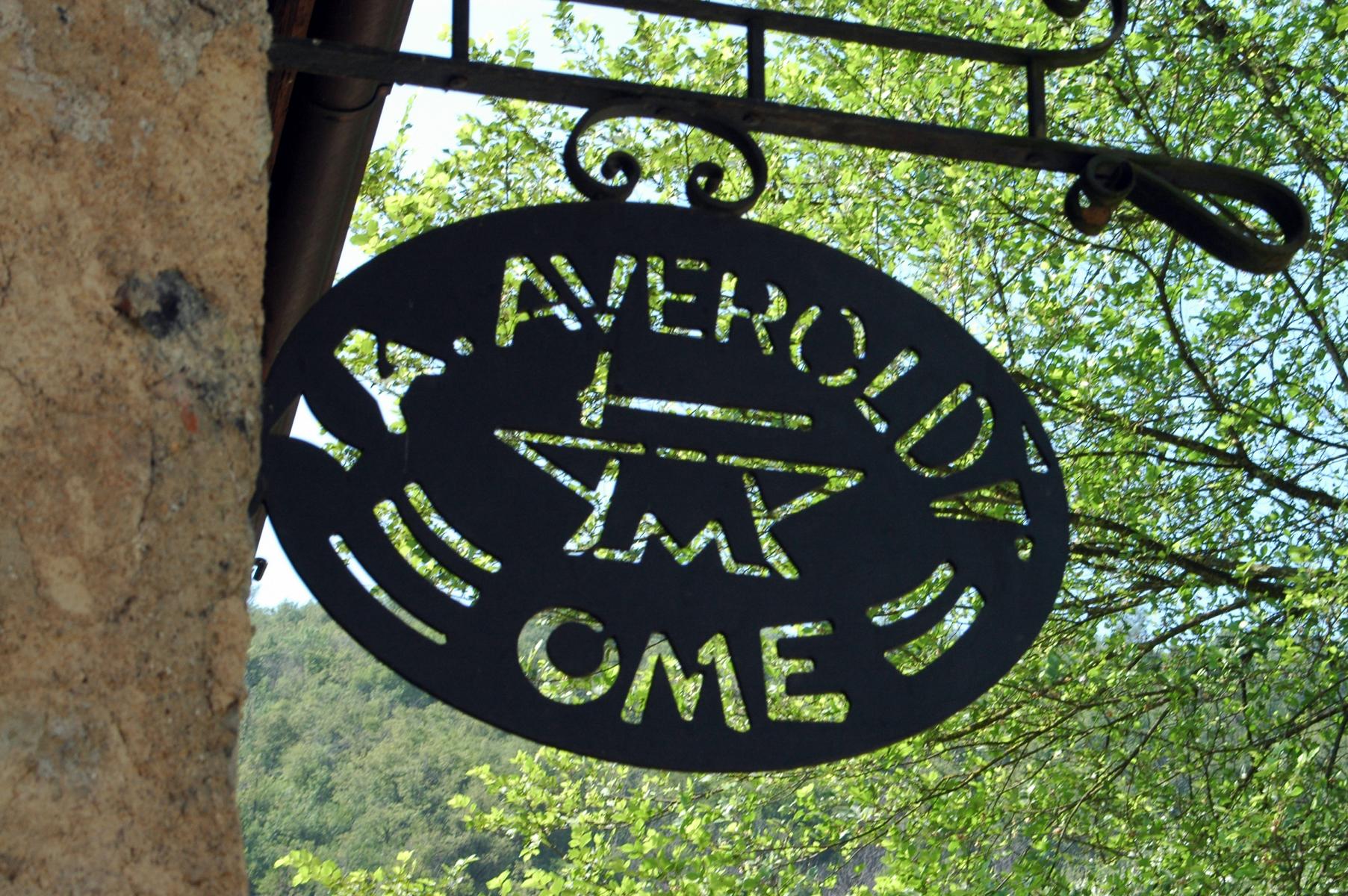 Left: The power of water is incredible. Here, the waterwheel is working. Right: The sign of the Averoldi mill.
Forged from iron, of course.

In Ome you can find the evidence of the old production of plows, hoes, billhooks; elements of an agricultural tradition that in Franciacorta has never died and has seen a flourish of development. But above all, in Ome, you find people. Ranging from full members of the world of weapons - you can meet to people of reverence such as: the engraver Francesco "Gino" Medici or Bortolo Gitti, who made the Imperiale Montecarlo double barrelled guns; Angelo Galeazzi, who invented the Italian school of engraving and often visited as well. Alongside the enthusiasts who spend Saturdays and Sundays in the forge working iron, with no other pay than the satisfaction of having created something very modern with their own hands, while simultaneously being ancient and unique.
The Municipality understands the importance of the settlement and provides the coal for the forge. The forgers bring us the passion and the effort, because the work is slow and very hard. It is nestled on the ground, next to the tool that works its rhythms dictated by the flow of water and time. The sound of the rhythm is made by him, the helve hammer. The only help that is offered to the blacksmiths comes from he who removes the wedge under the pole, or puts it back to amortize the last jolts.
The workshop is a wet place because it is open to the water that flows and evaporates. Cold, because the forge is in a place rarely visited by the sun and because in summer the work of the forge must be acceptable. In winter, the frost bites with all its force: the heat of the forge makes the iron malleable, but it cannot dissolve the arabesques of ice on the window’s glasses. Whoever imagines Vulcan's cave as a place of warmth or burning heat will have to pass through here and witness the truth. Who knows if the location reflects the lifestyle of the masters who worked hard their whole lives and if it was cold inside they worked harder to keep themselves warm.
The Ome Town Council purchased the forge in 1997 and had it restored and put back into operation. In May 2000, an association called Amici del Maglio (Friends of the Forge) formed to promote cultural activities and revive the ancient art of making Damascus steel blades. The driving force for all that, of course, were the men. Not just Gino Medici, the young man born in 1924 who found a vent for his energy and is still quick as a ferret in his work, nor only Galeazzi and Gitti. 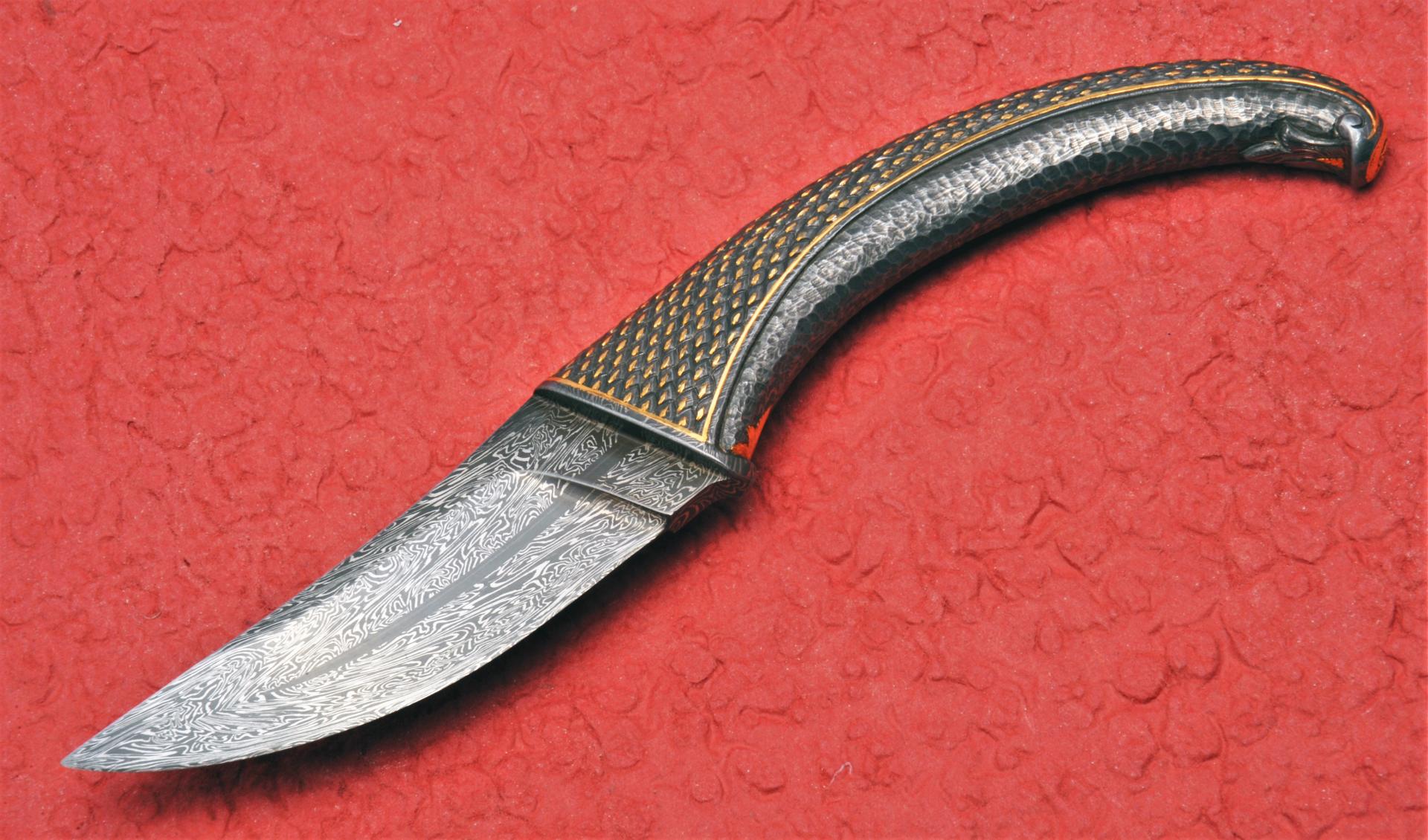 Top and bottom: Damascus by Dario Quartini made with Ome's helve hammer. Shaping and gold inlaid by
the Italian engraver Gianmarco Sabatti. 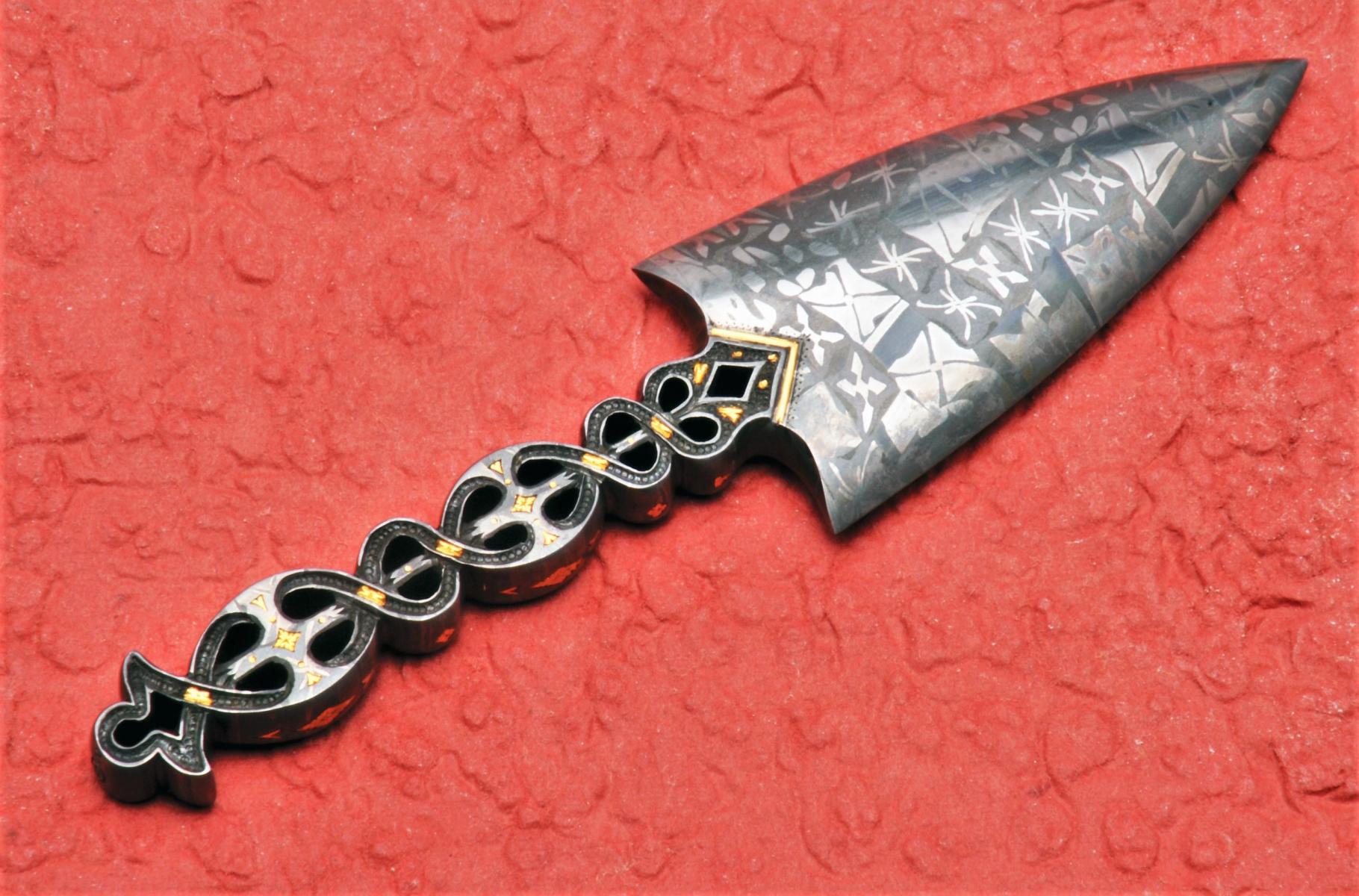 You will see Dario Quartini and Lorenzo Moro, who forge on free days and have come to realize the pleasure of working together. There are those wives to whom the enthusiasm of the work has been has been passed. And there are the visitors and the curious, who won’t leave without taking the experience of a dive into the past with them. The professions of those forging are varied, none is a blacksmith: all have rediscovered the ancient tradition for pure passion and not for professional needs.
The people are self-taught. They learned by making mistakes and correcting them while steadily crafting pieces of beauty. With the Damascus of Ome they make knives. Dario Quartini has just become a Master in the Italian Knife Guild and works in the old style with files creating Damascus mosaic, which you will see in the pictures. 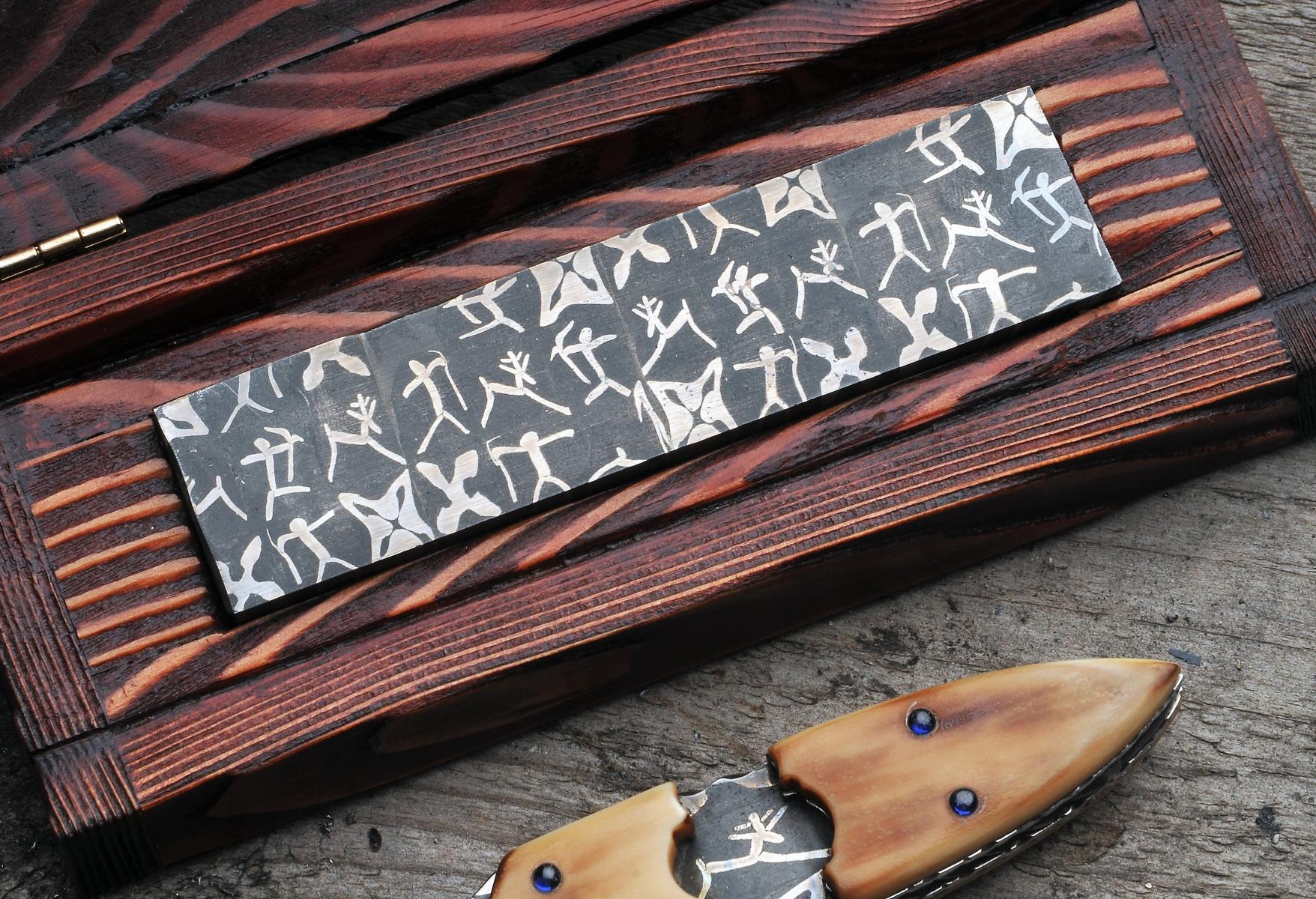 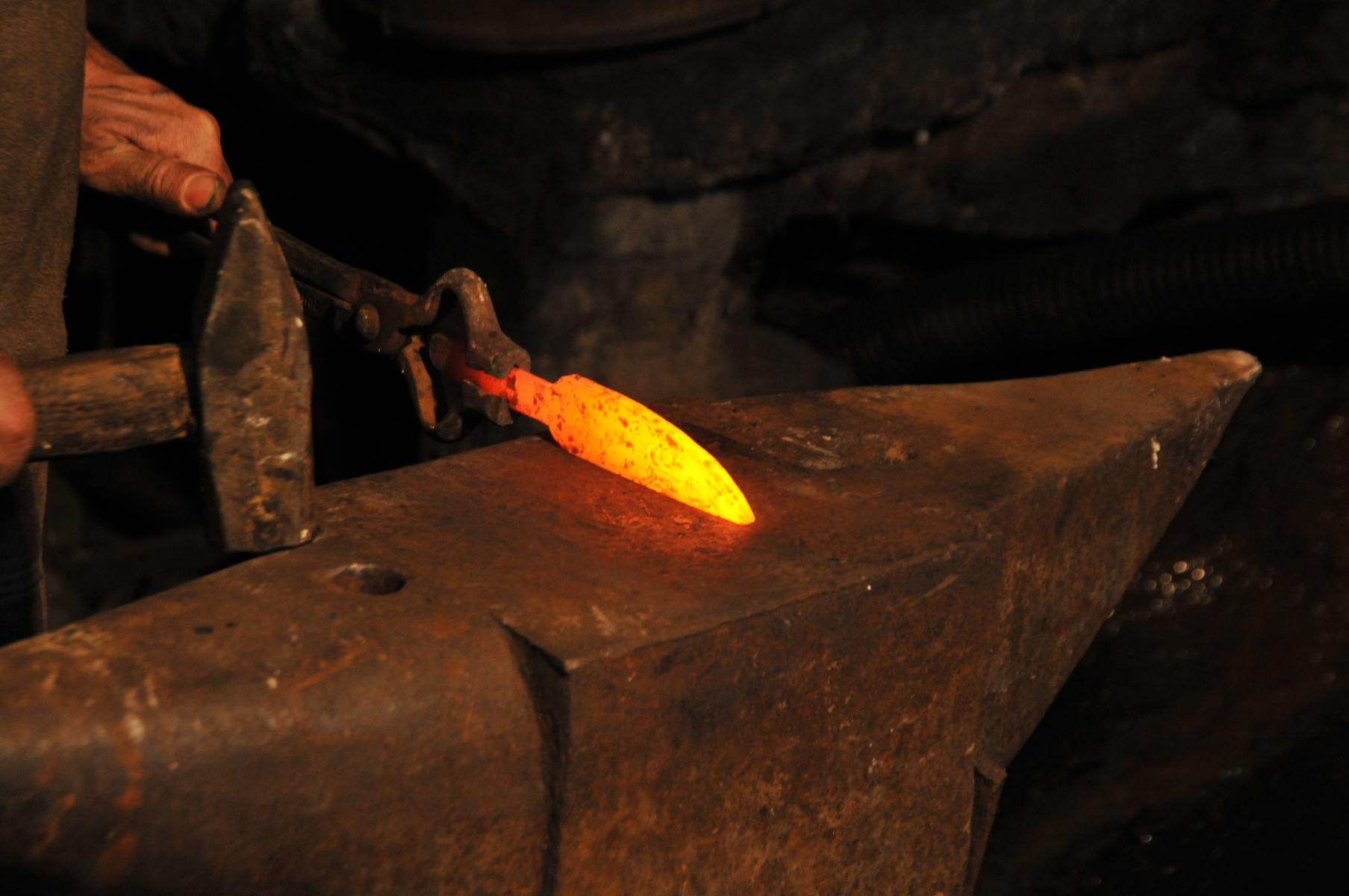 Left: Prehistoric petroglyphs from Val Camonica, one of the largest valleys of the central Alps, in eastern
Lombardy, captured here in Damascus steel. Right: Shaping a blade on the anvil.
The hammer works on Saturdays and Sundays, when those who work there are free from professional commitments. And they rest, as it always happens in the Brescian tradition, by working a little longer.
A blast from the past, gracious hospitality gentlemen, the opportunity to contribute to keep alive a testament to the forgery and helve hammer, which is the oldest in the world still in operation. 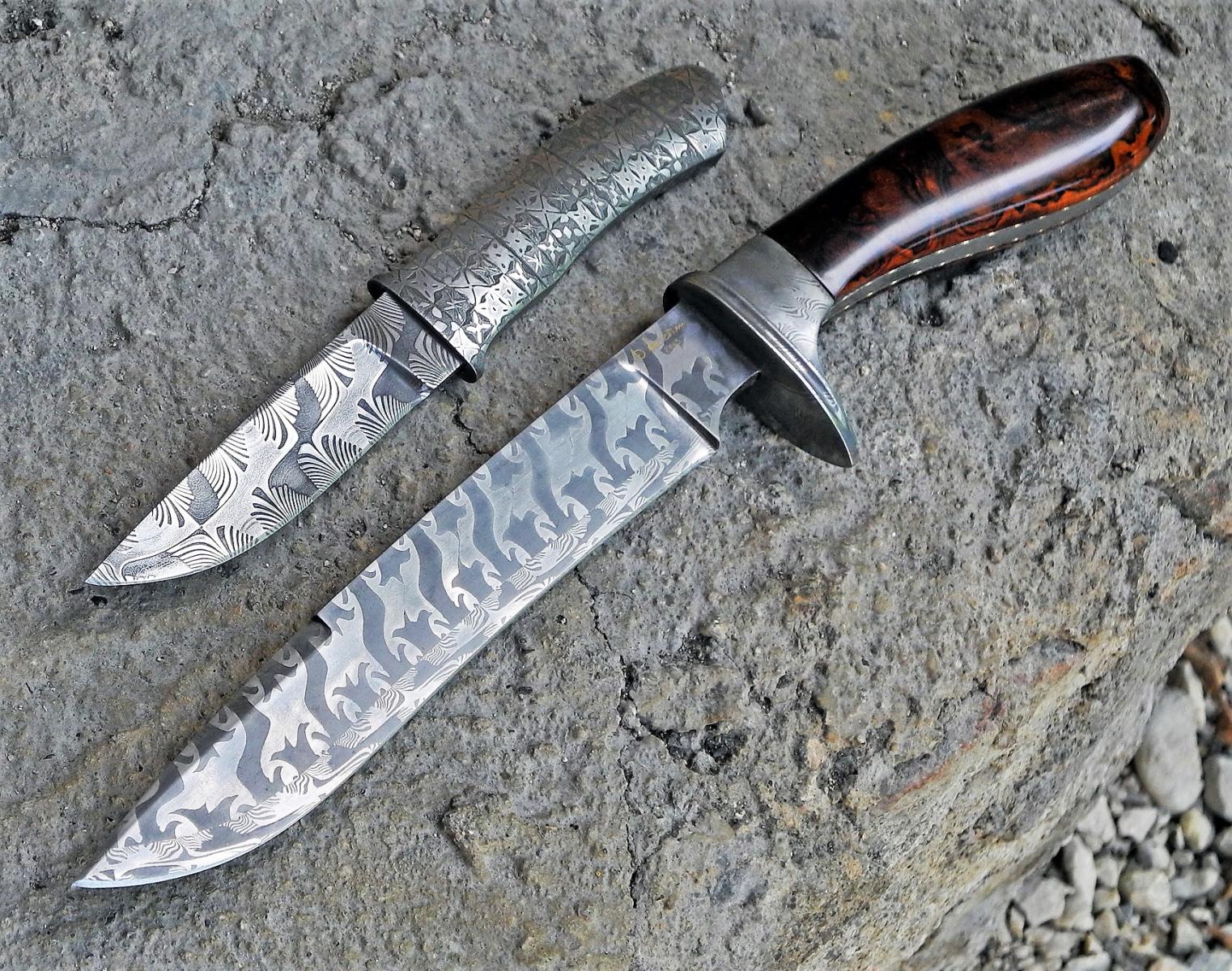