Knife shows exist in all shapes and sizes. Some call themselves a show, other an exhibition. Coutellia in Thiers calls itself a knife festival, and rightly so. The two-day event is a fantastic treat for everybody who loves knives and everything related.
Text and pictures Bas Martens 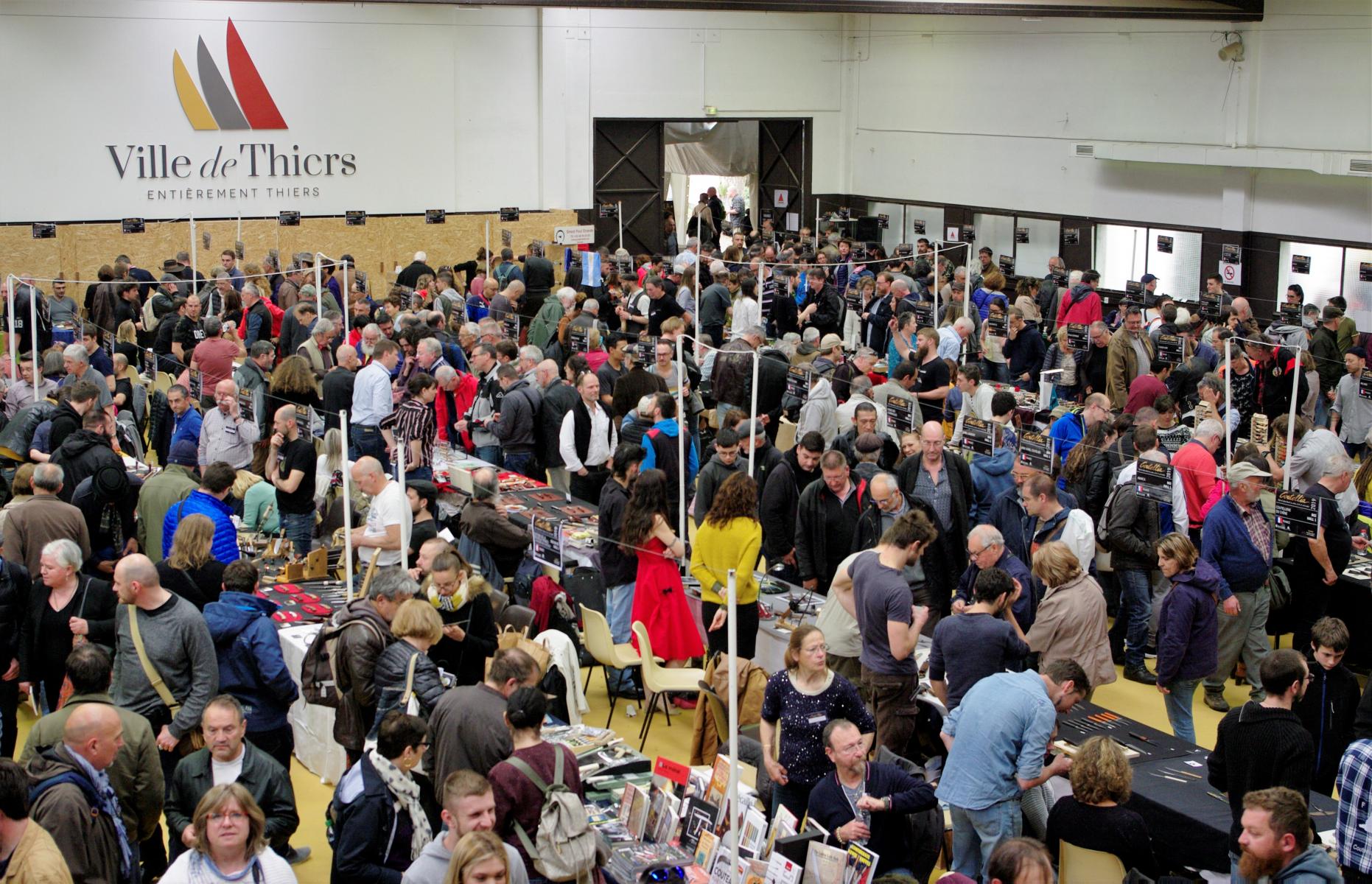 The first hall of the Coutellia, shortly after the opening. The festival had 6600 visitors, an all-time high.
It really doesn’t matter whether you are a knife maker meeting with clients; whether you are looking to buy steel, wood, leather or exotic knife-making materials; whether you want to find a book on edged weapons; whether you are a collector of old or modern blades; or whether you just love knives and knife makers: the Coutellia in Thiers has it all.
Coutellia calls itself an international festival for traditional and art knives and that sums it up pretty well. We cannot think of another European knife show which is so big and diverse.
For almost three decades, Coutellia has been the yearly centre of the European ‘knife season’. This year’s edition featured 230 exhibitors from 18 different countries and had an all-time high of 6600 visitors, which shows that Coutellia keeps improving. The majority of the exhibitors are knife makers and suppliers of knife making materials, but the adjacent ‘Village coutellier’ (cutlery village) has more to offer: a forging experience, a tent with collector’s knives, exhibitions and demonstrations of razors and corkscrews, scrimshaw demonstrations and a cutting contest. The city of Albacete, the Spanish counterpart of Thiers, had a separate place to present itself, showing for instance the remarkable way in which street vendors sold knives.
The 2019 edition had two special guests: American knife maker Joe Keeslar (a participant at Coutellia for over 20 years) as the president of the Jury, and famous singer and knife lover Florent Pagny, who took his time to look around and even bought some knives. 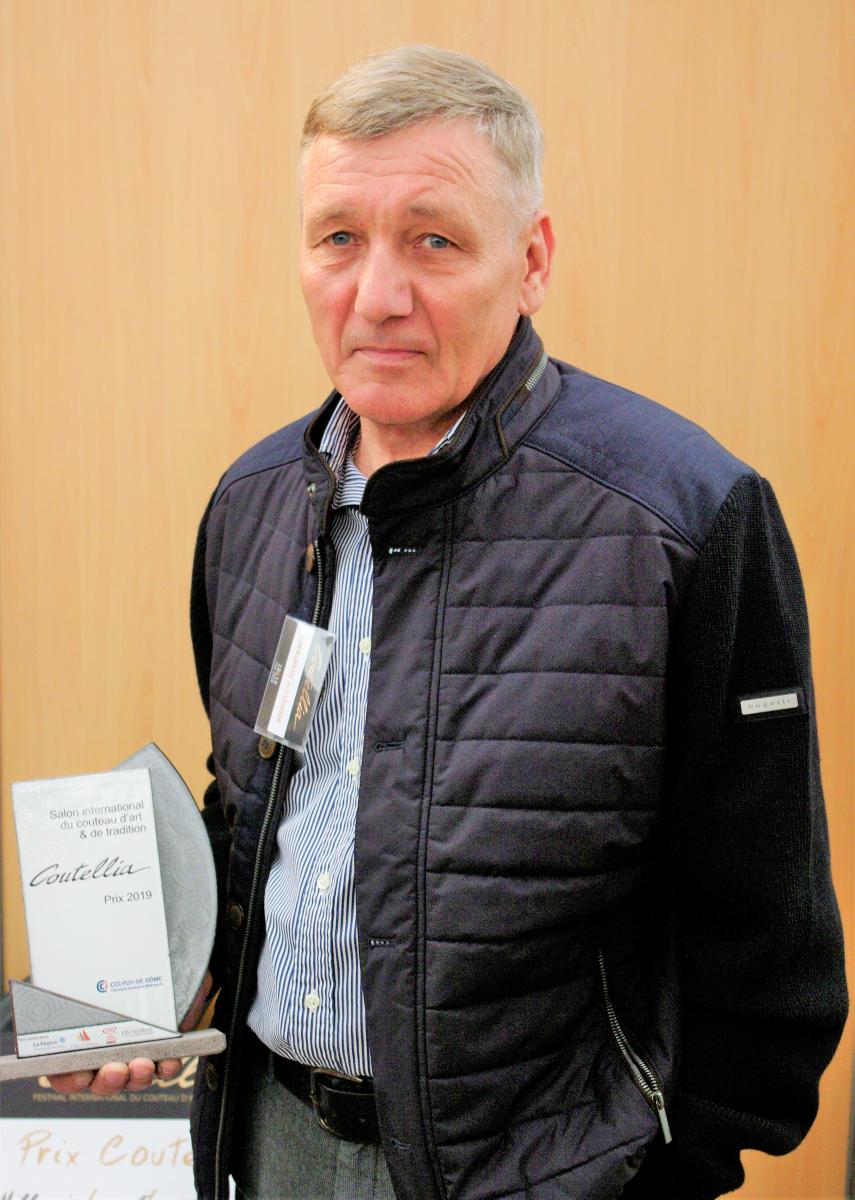 Left: Famous singer Florent Pagny was a special guest at Coutellia. He took his time to look around
and even bought some knives.
Center: Russian knife maker Alexander Cheburkov won the Prix Coutellia.
Right: French knife maker Pascale Sabaté won the Prix du Public.
As per usual, the Coutellia held a ‘Concours’ for the knife makers, with almost 30 contestants. The prize winners were:
1- Prix Coutellia: Alexander Cheburkov with his ‘Russian Fairy Tales’;
2- Prix du Jury: Giuseppe Pala with his ‘Bronte Bianco’;
3- Prix de Public: Pascale Sabaté with her ‘Orange Méchanique’, which is pictured on the cover of this issue.
In 2020 Coutellia will have a special treat. The festival celebrates its 30th anniversary, and on that occasion, it will be three days instead of two. Coutellia 2020 will be held on May 22, 23 and 24 and will feature some special attractions, like a Damascus forging competition. European Blades Mag. will keep you informed but you can also have a look at www.coutellia.fr.

Vladimir Gerasimov (centre), his wife Svetlana and son Yuri with their Zladinox company at Coutellia.
The next issue of European Blades Mag will have an article on our visit to Zladinox. 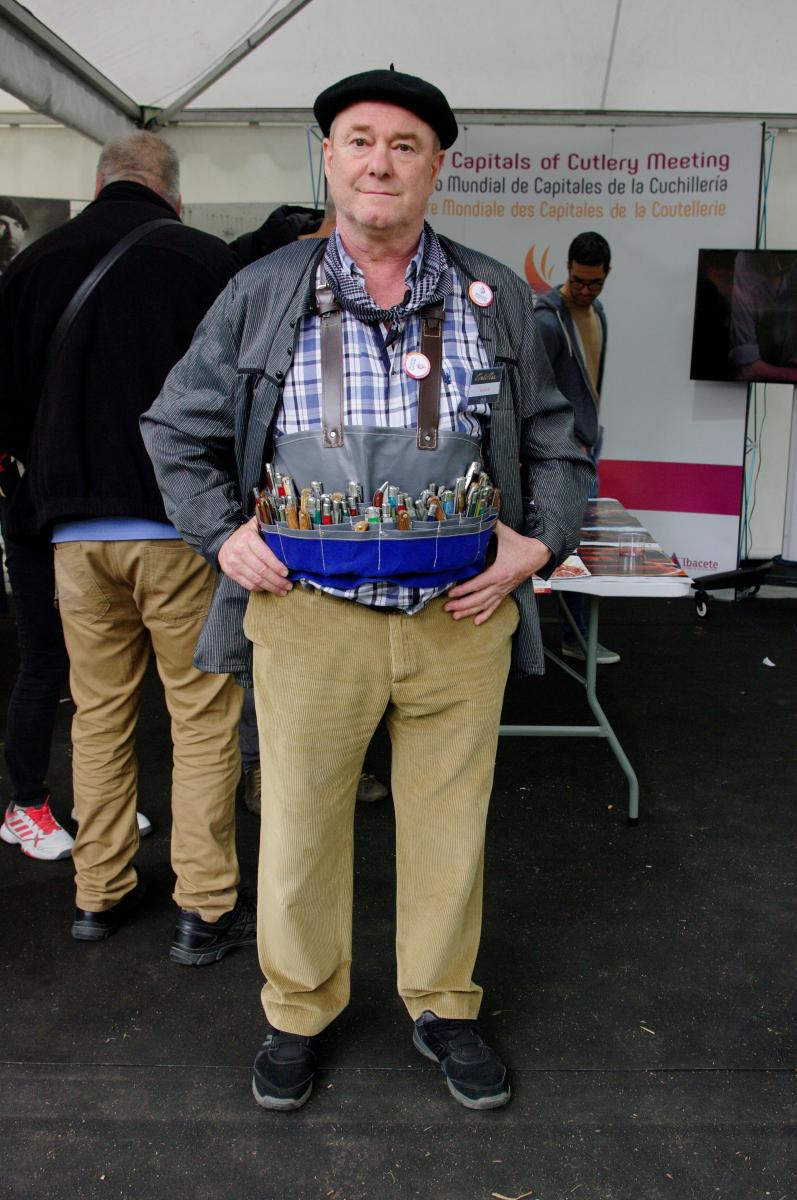 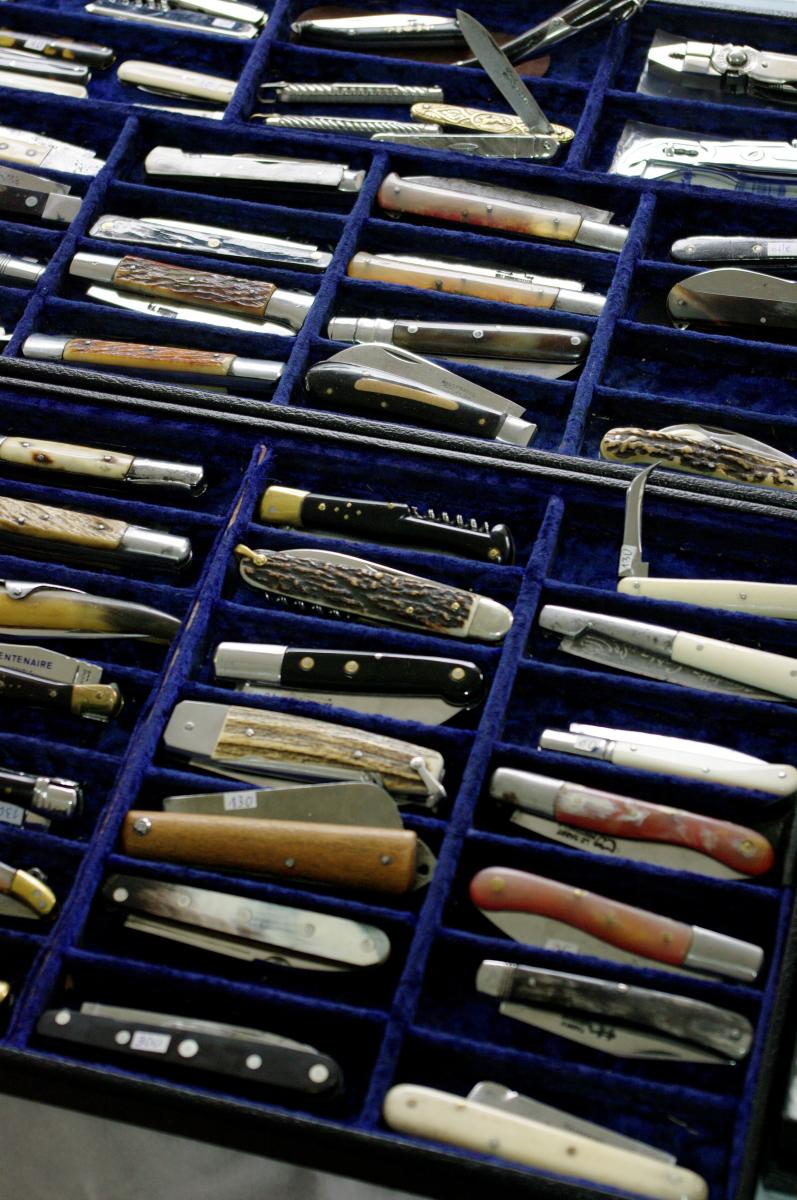 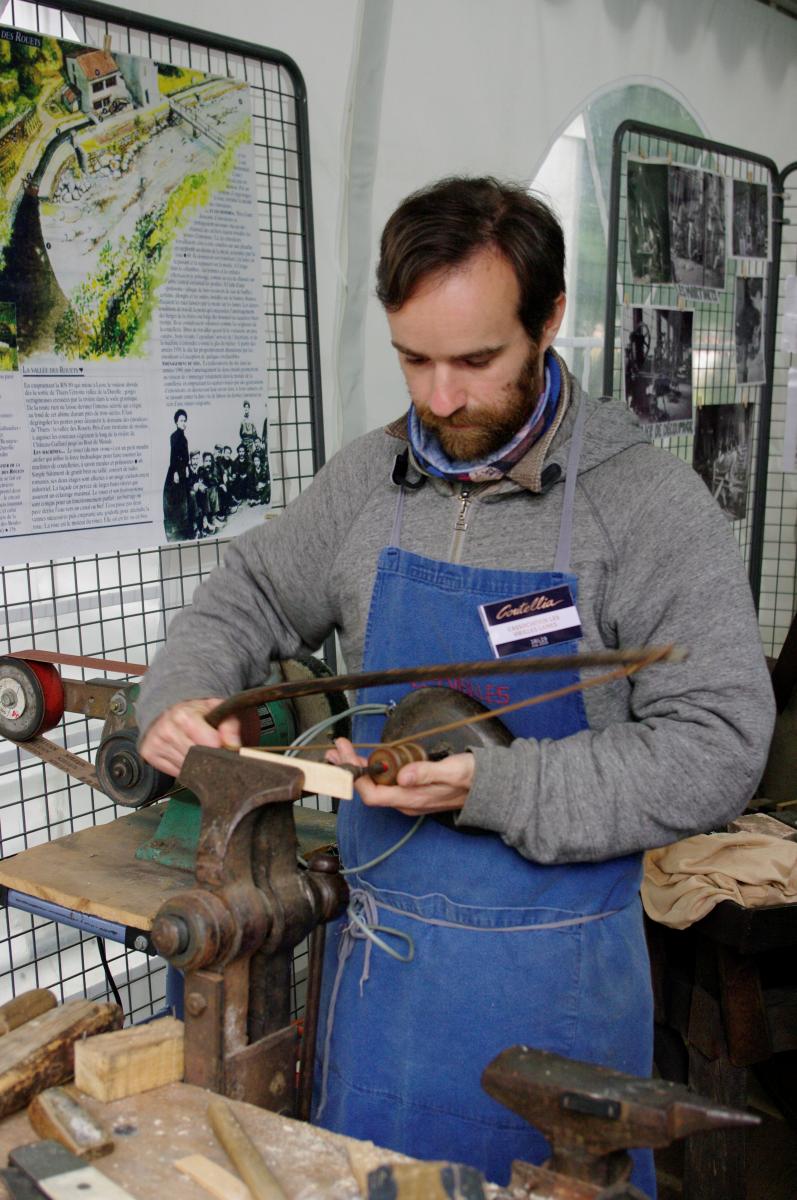 Left: The city of Albacete had a special presentation in Thiers, showing the way in which street vendors used
to sell knives.
Centre: Knives for collectors, from cheap to (very) expensive.
Right: The ‘Association de preservation du Patrimoine Coutelier’ (Association for the preservation of the cutlery heritage) demonstrated several ancient knife-making tools.

A fixed blade by French knife maker Nicolas Dartus. At the recent Blade Show, Dartus was accepted as Journeyman Smith by the American Bladesmith Society. The steel of this knife is XC100, the handle is
curly birch.

Frenchmen Denis Lagarde (Atelier 5.96) presented this ‘12A Péro’. The name refers to Apéro, which in
French is an abbreviation for aperitif. The blade is XC 100, the olive fork is 14C28N steel. The handle is
made from jeans laminate: Levi’s 501 and epoxy. 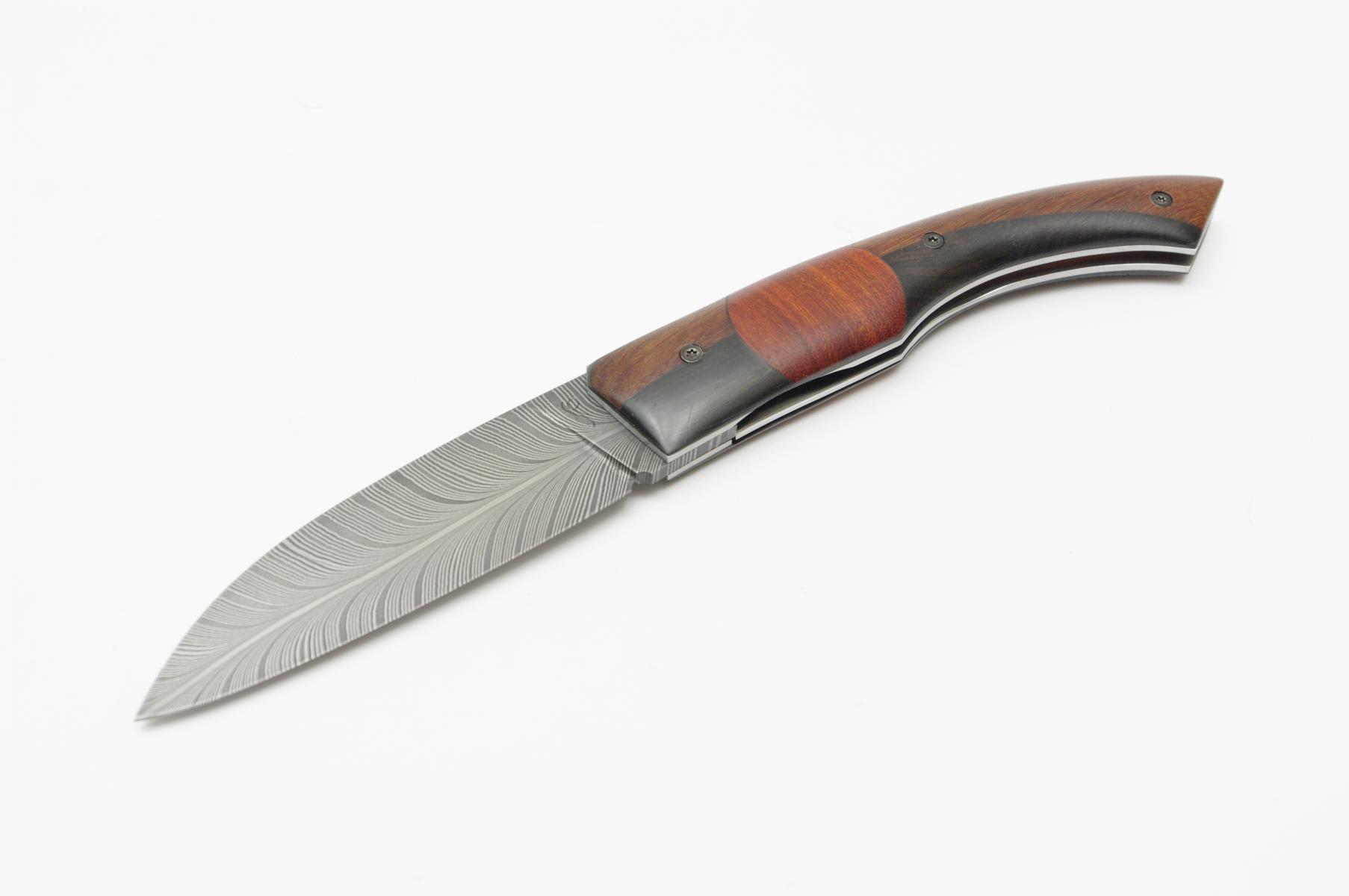 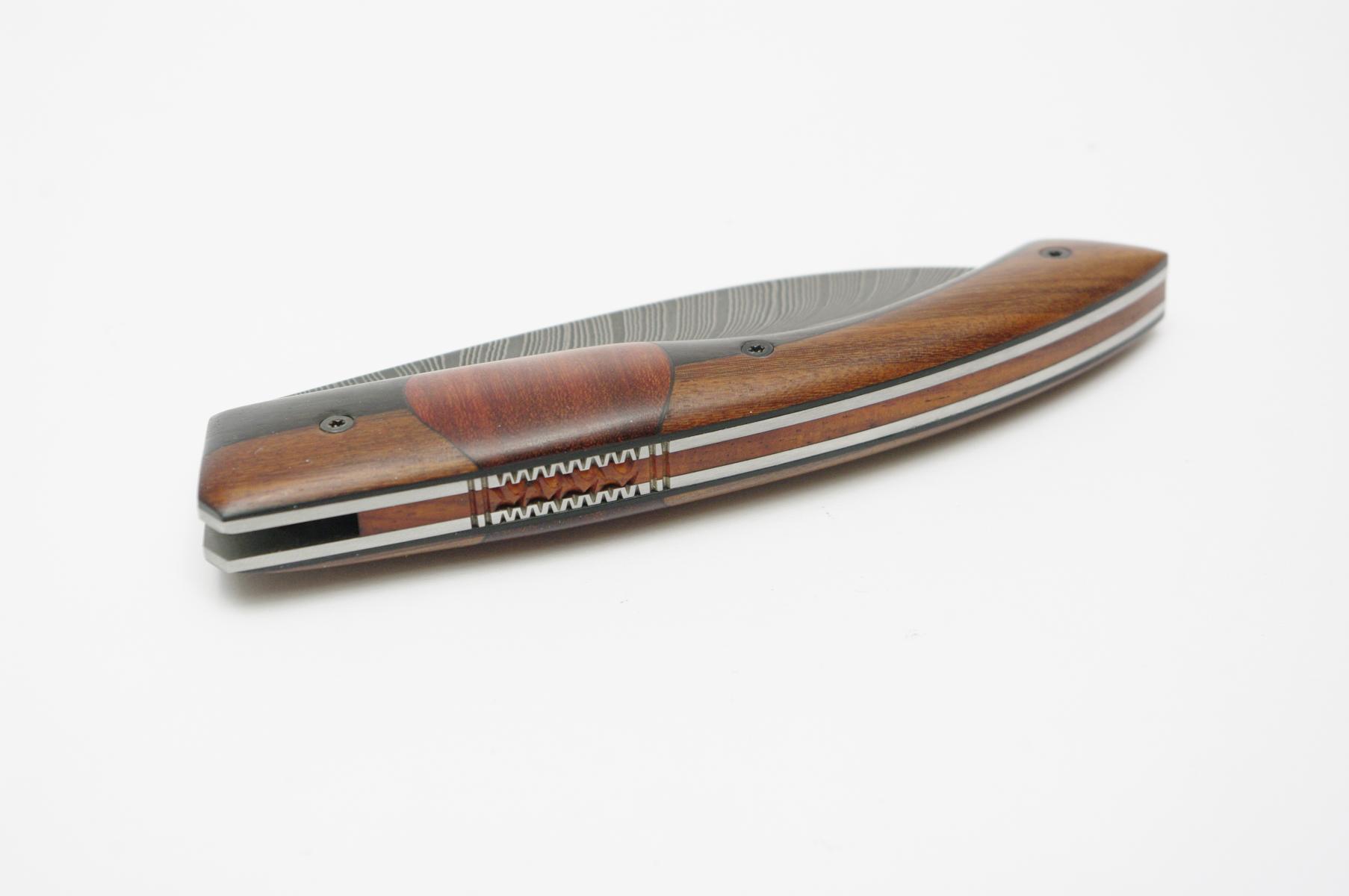 The ‘Orange Mécanique’ by French maker Pascale Sabaté. Her elegant folding knife won the Prix du Public
(public award). It has a blade from feather Damascus, forged by Philippe Ricard. The handle scales are a
combination from Cayenne Ebony, Rio Palisander and Pernambuco. 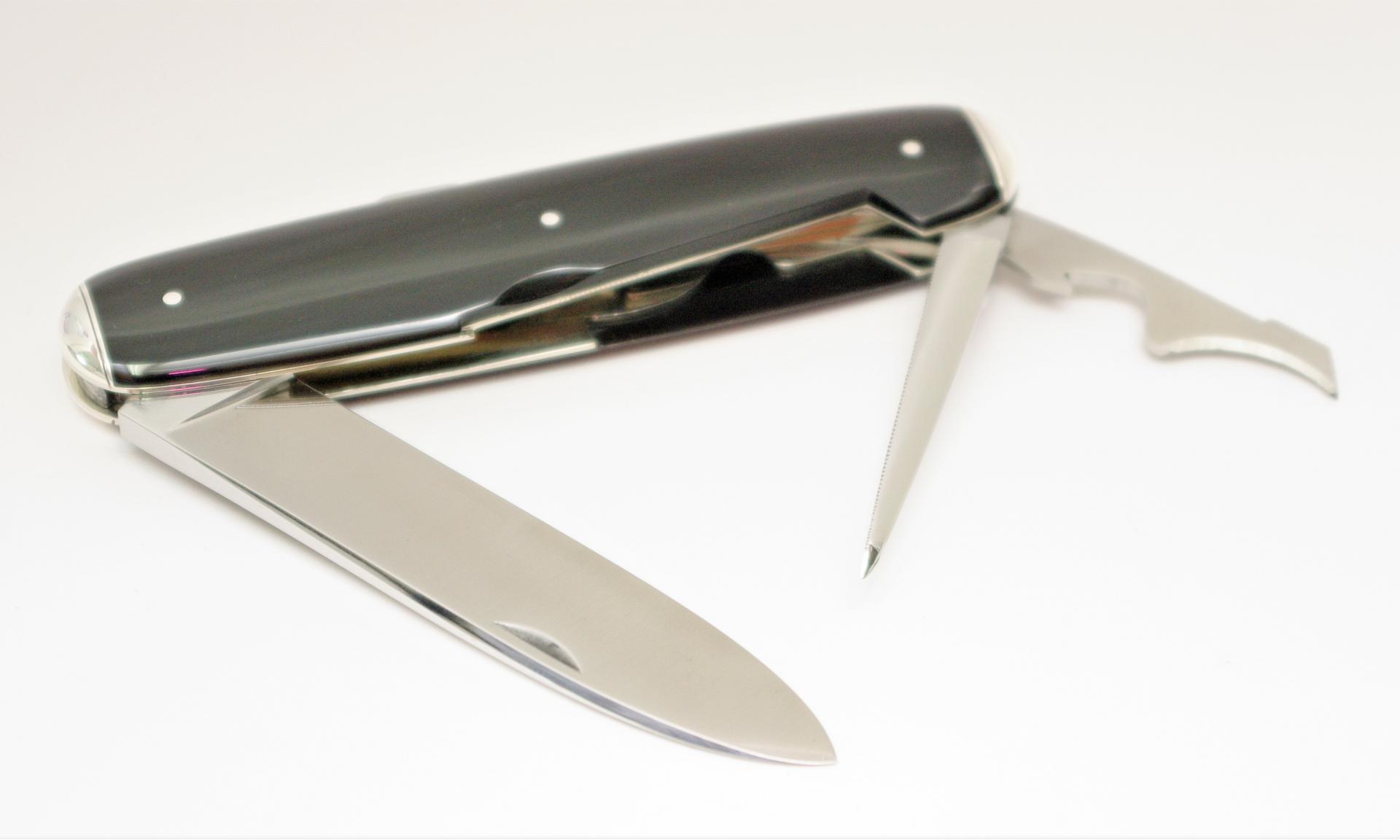 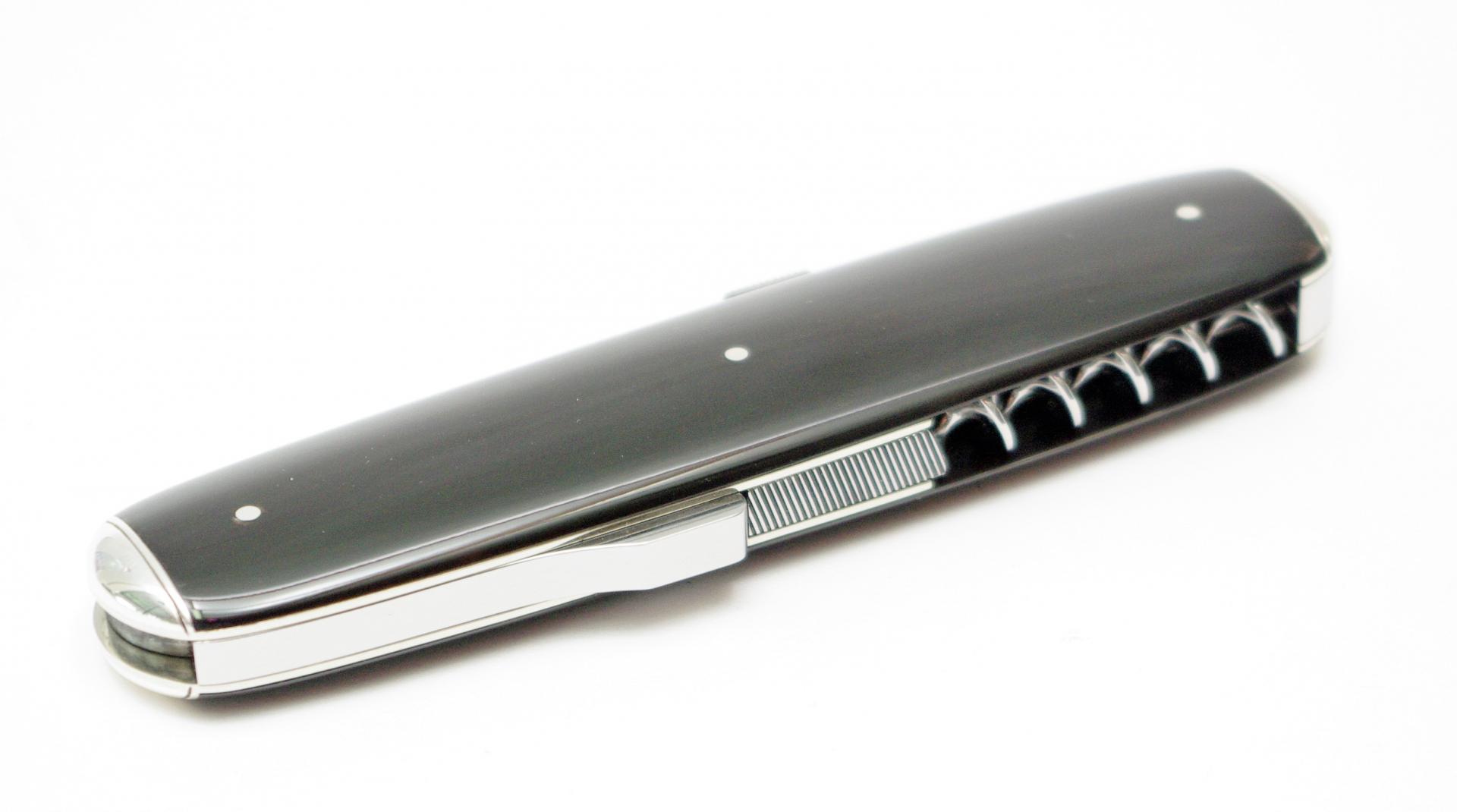 The ‘Navette’ (shuttle) by French maker Adrien Vautrin. The knife has four tools. The blade is made from
14C28N steel, the corkscrew, bottle and can opener and the piercer are from Z20C13. The knife has a
tapered frame and buffalo horn scales, and subtle filework on the spine. The closed length is 112 mm. 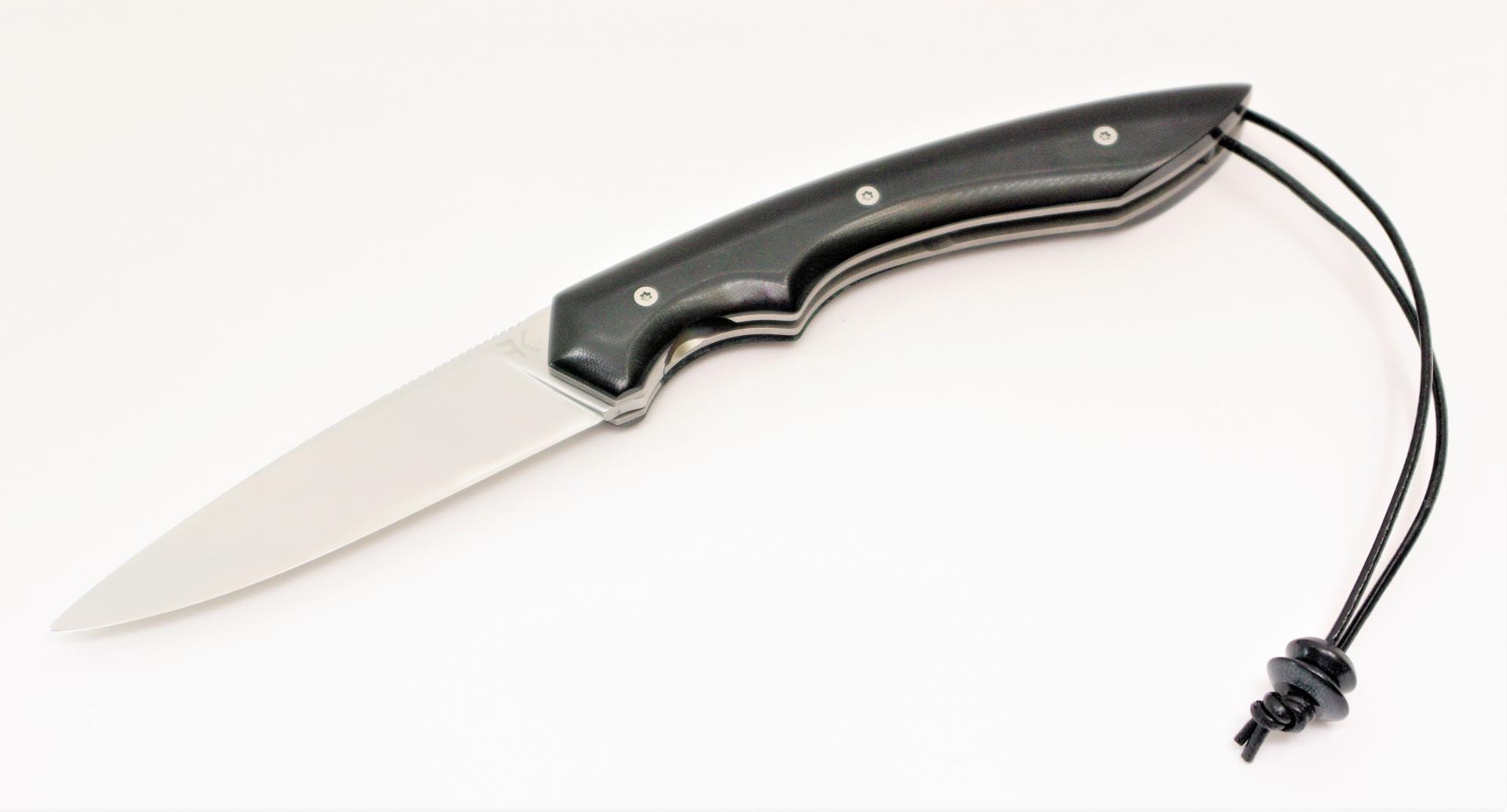 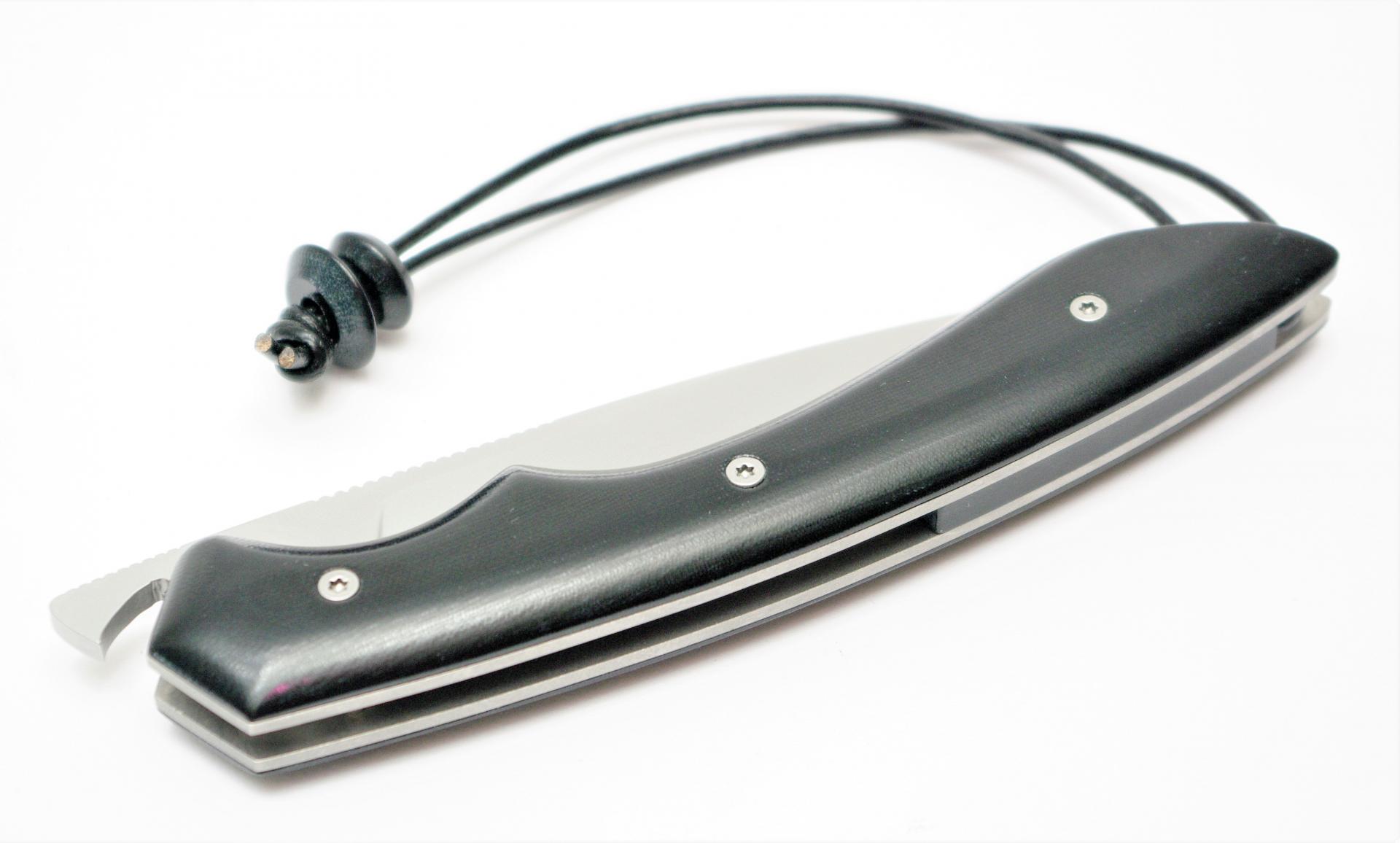 Nicolas Kowal from La Forge K made this ‘Hulotte +’, which translates as servant or helper. The blade is
RWL34, the handle is black Micarta. 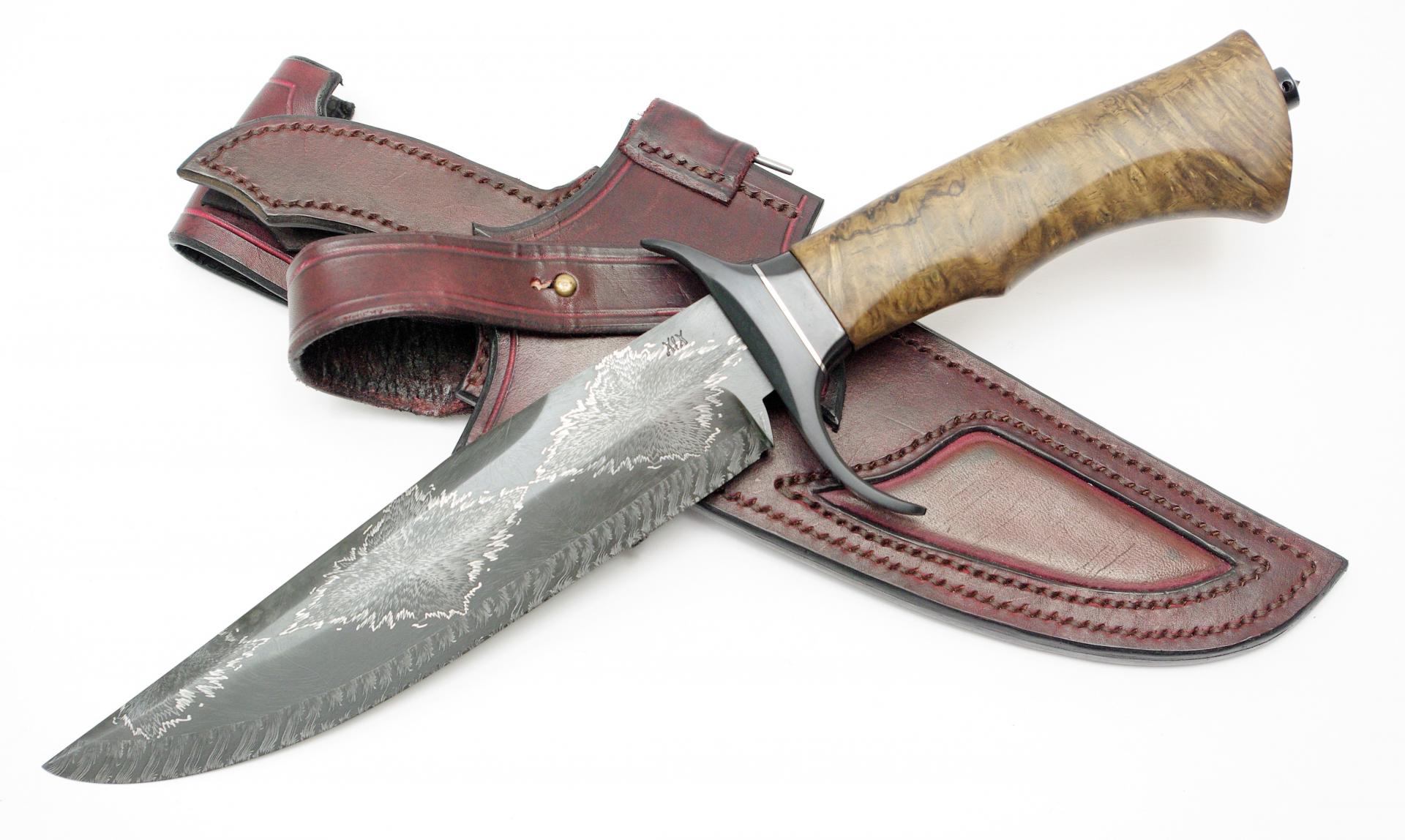 A camp knife by French maker Silvain Dixneuf. The blade is mosaic Damascus, the handle is made from
burr walnut. The knife can be disassembled. 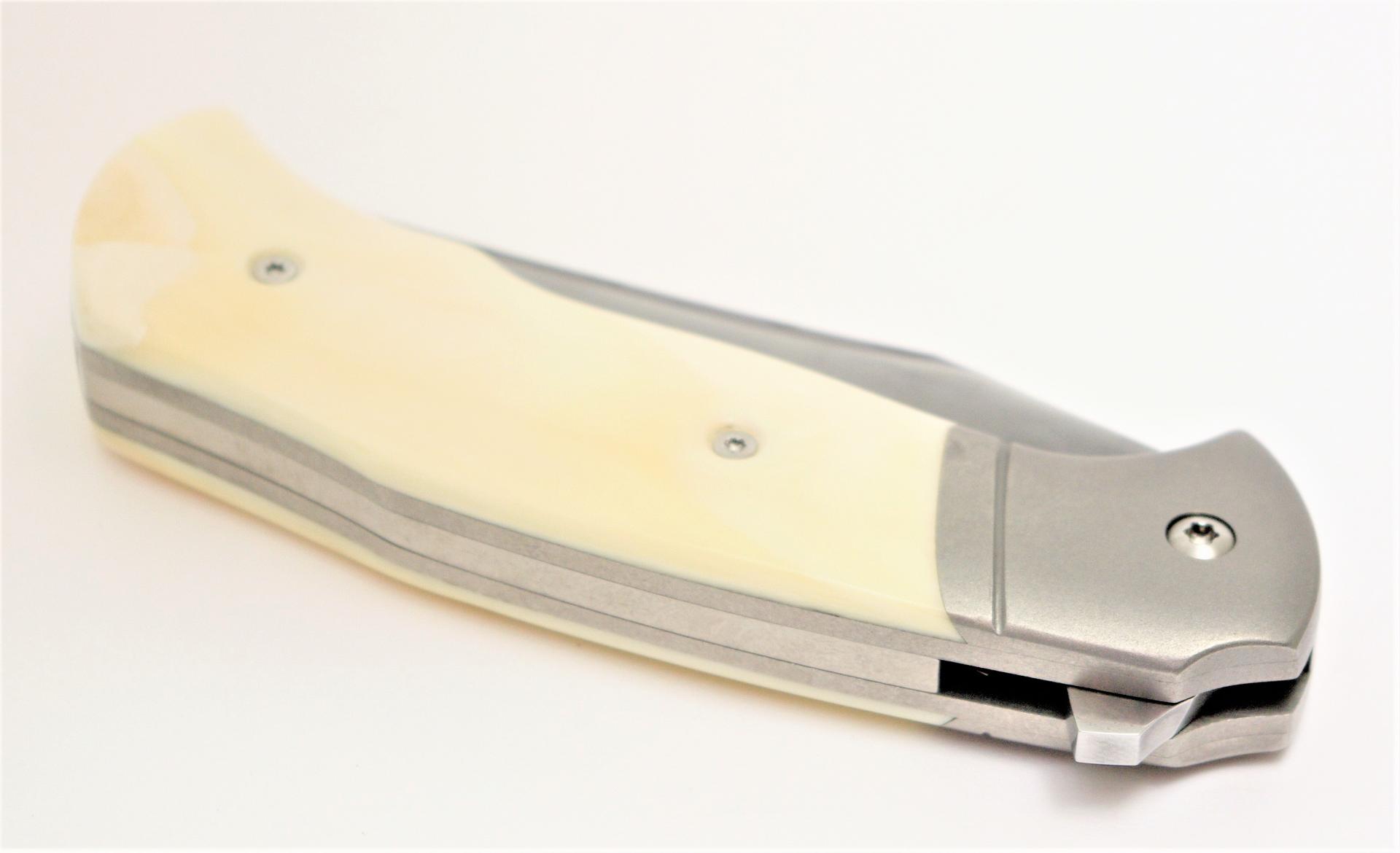 A linerlock folding knife by French maker Gregory Picard. The 80 mm blade is made from C120 steel
with an attractive hamon. The handle is warthog tooth. 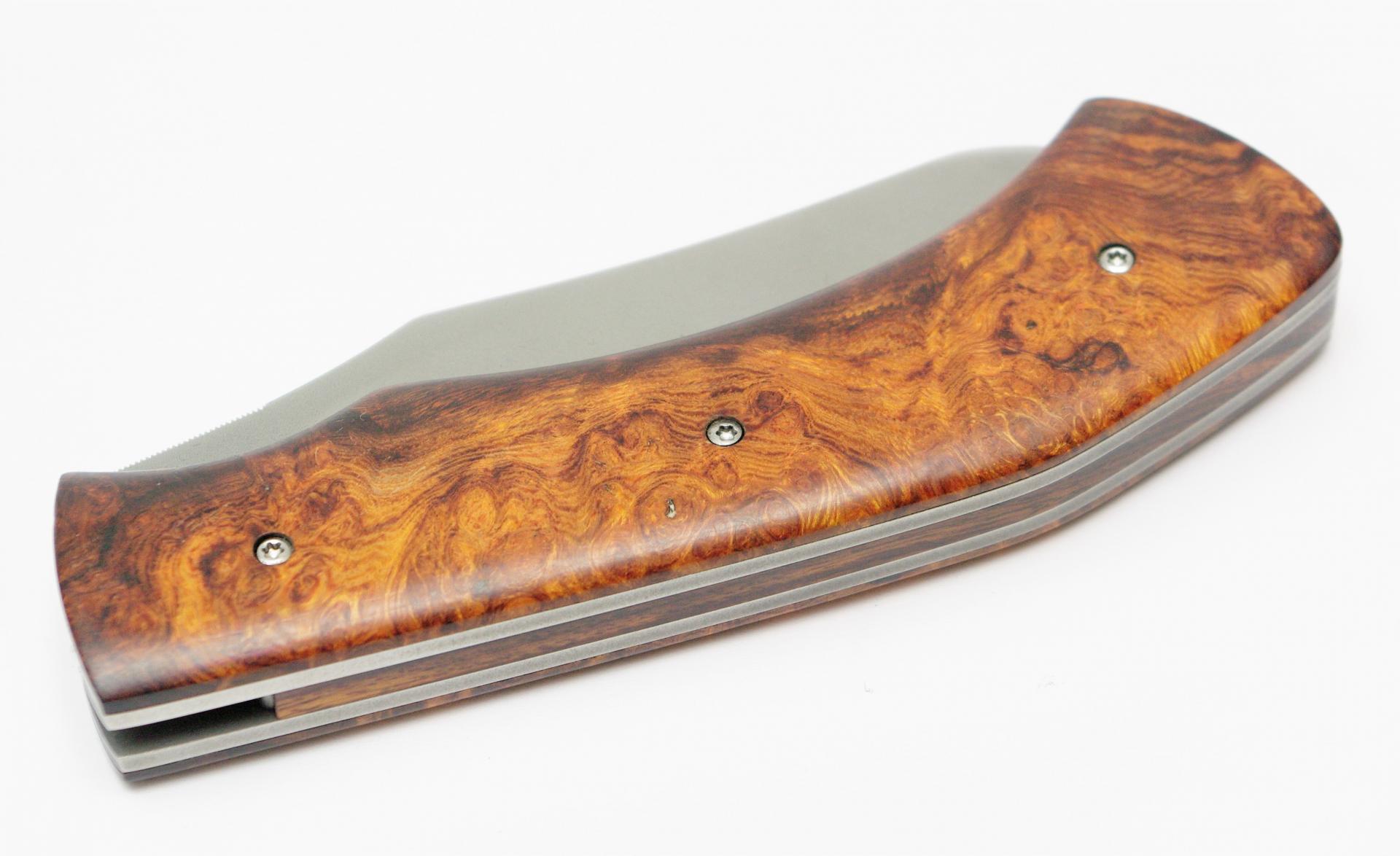 A linerlock folding knife by Joël Grandjean. The blade is RWL34, the liners are titanium and the handles
are Arizona Desert Ironwood.

French knife maker Franck Souville is very successful with his model ‘Bad Guy’. This one has an RWL
blade, green liners and sculpted G10 scales. 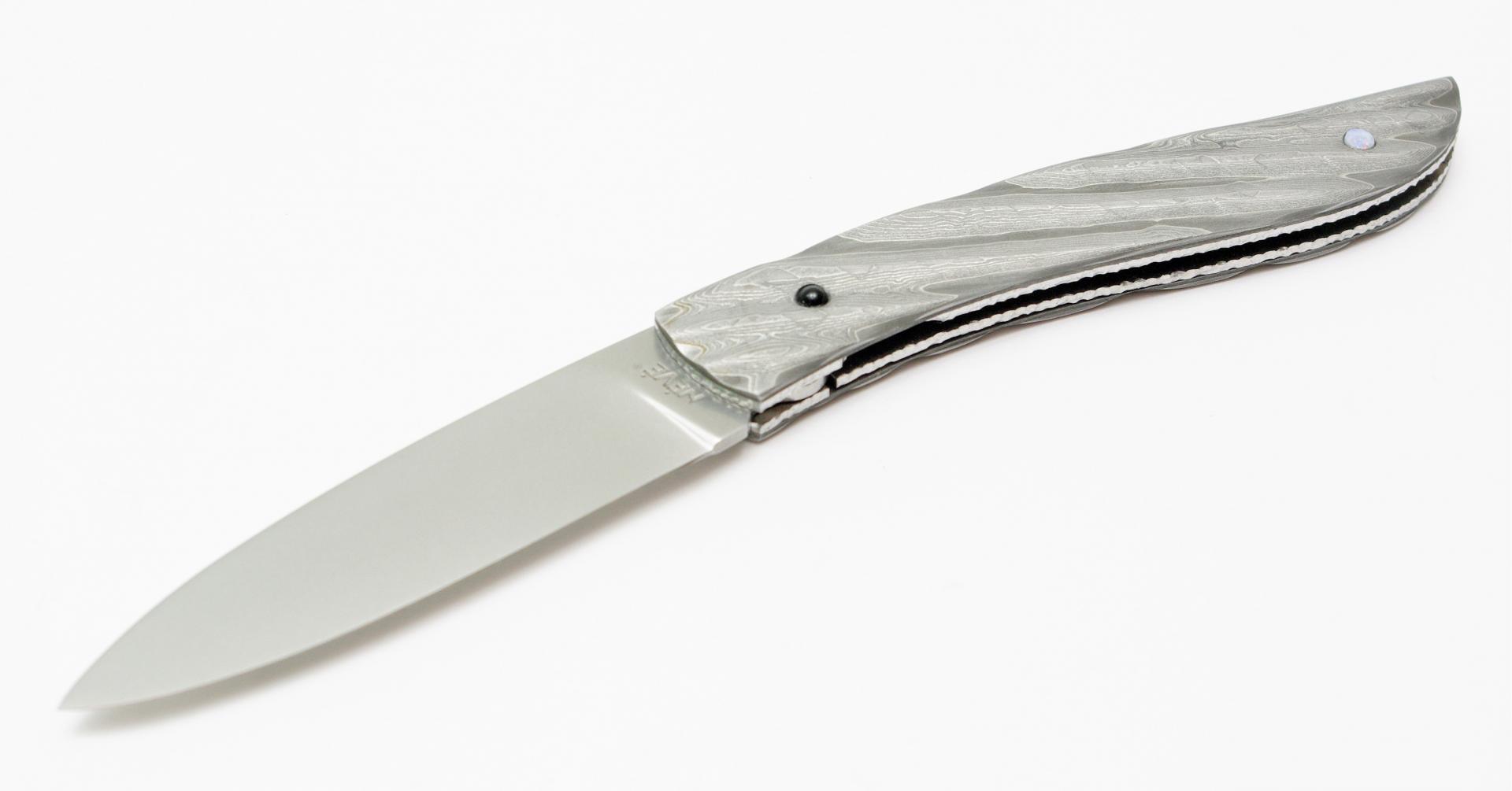 The ‘Névé’ by French knife maker Tim Bernard (Atelier Névé). The blade is 14C28N steel, the handle is
V610 San Maï with inlays of Opal and Onyx. 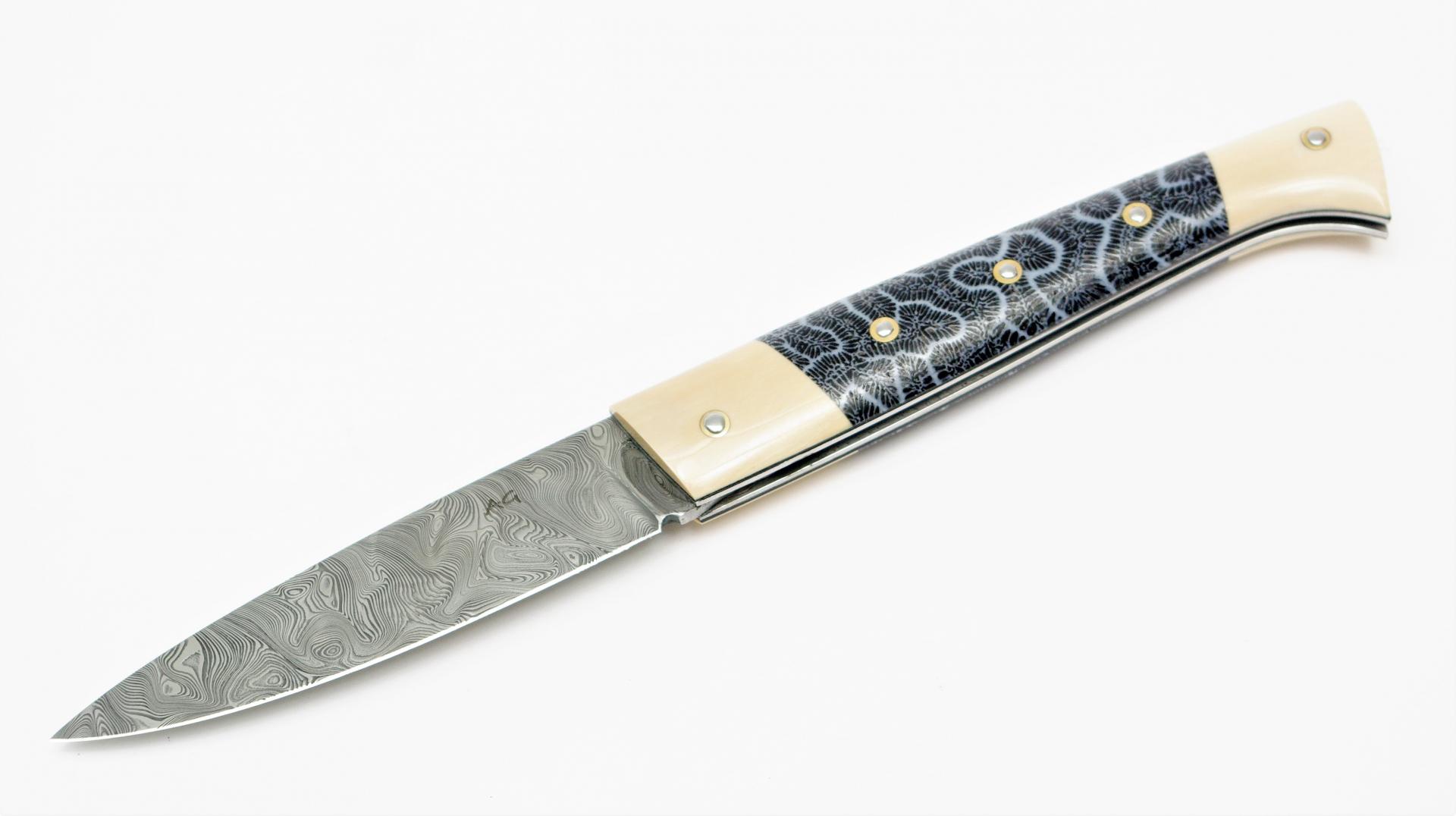 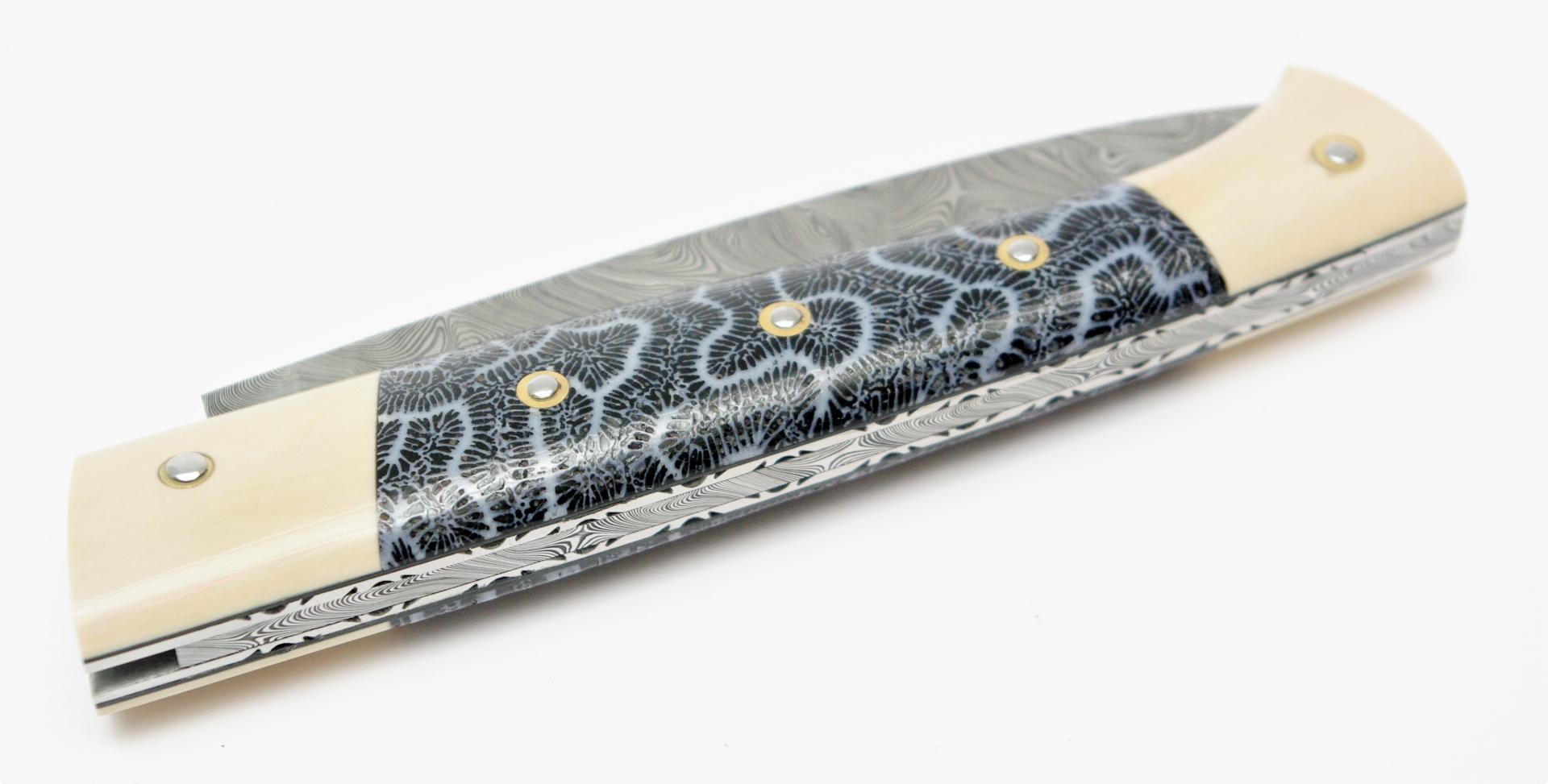 French knife maker Adrien Giovaninetti has created this model ‘Lombard’. The blade is Damask, the
handle materials are Mammoth and Coral.

The ‘Golden Sunset’ by Italian Master knife maker and goldsmith Daniele Ibba. The blade is Damascus
steel forged by Robert Eggerling. The handle is 416 steel with engravings by Simone Fezzardi and four
yellow diamonds. The opened knife measures 18 cm.

The ‘Pirate’ by French maker Julien Vergnaud. The blade of the 20 cm long knife is white paper steel. The
handle is burned brushed walnut. The striking guard is patinated steel.

The ‘Dragons’ by Swedish knife maker Andre Rybak. The blade is Damascus from Michael Styrefors,
the handle is Walloon steel with Mammoth, with scrimshaw by Fred Oud. The sheath is Ostrich. 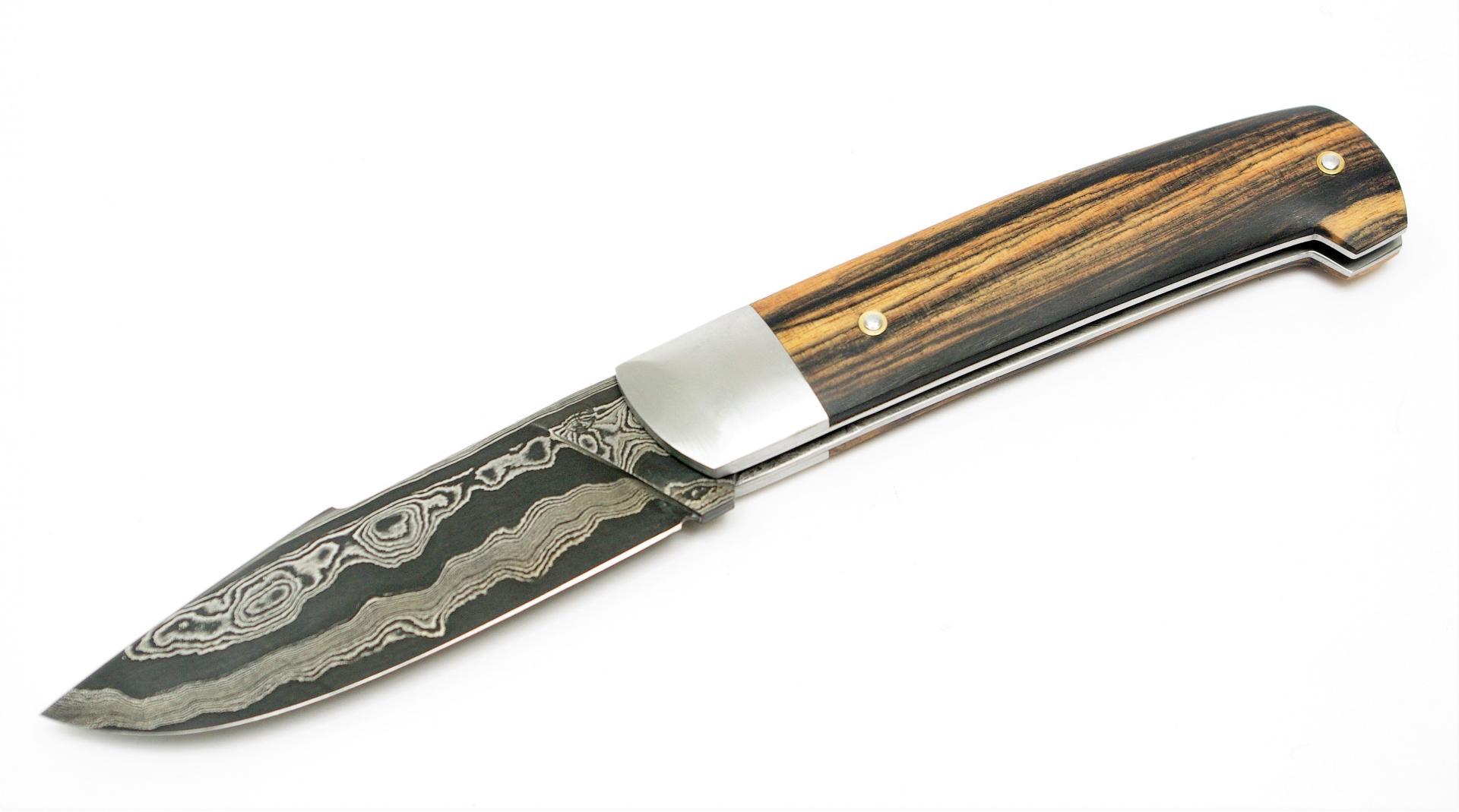 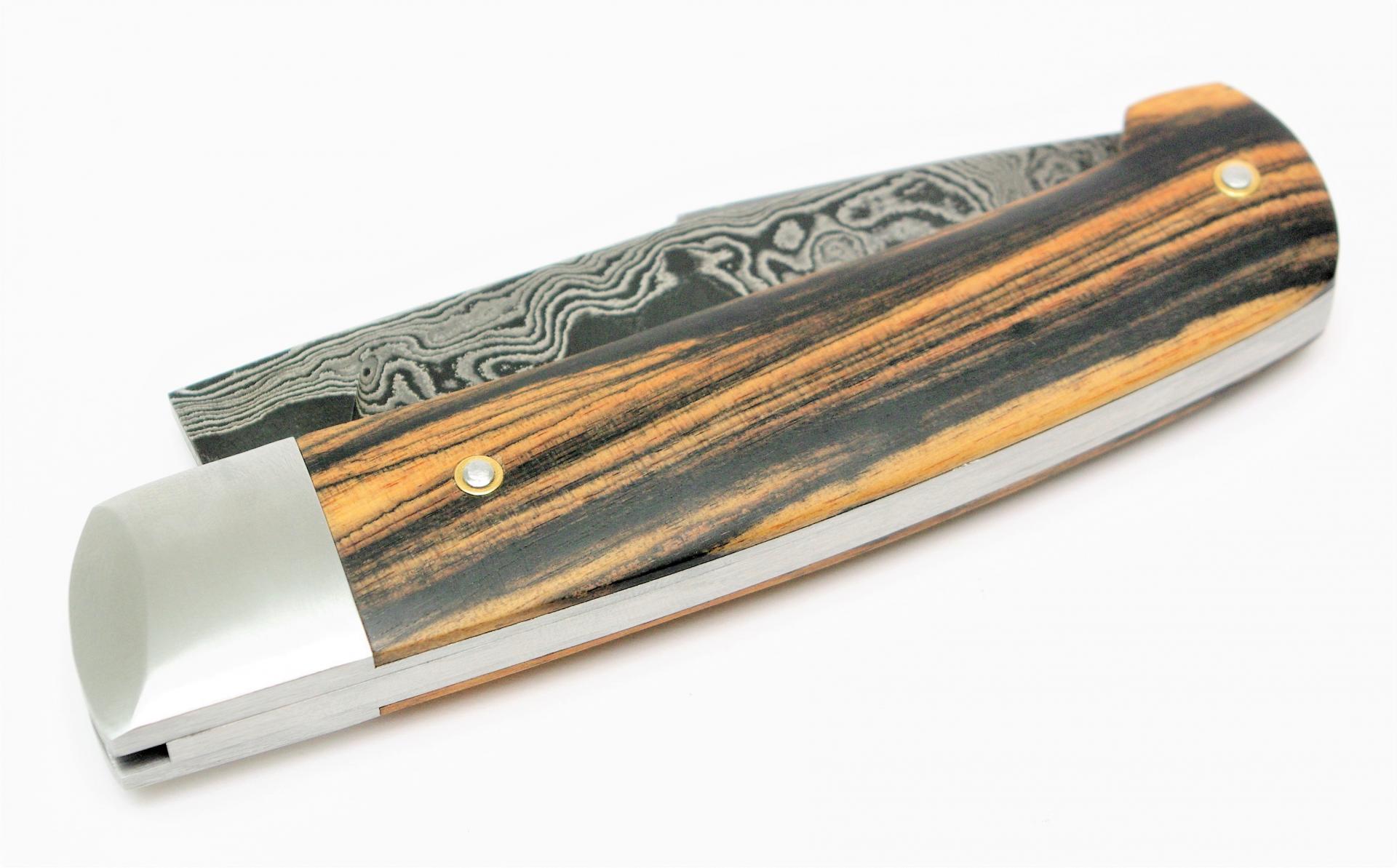 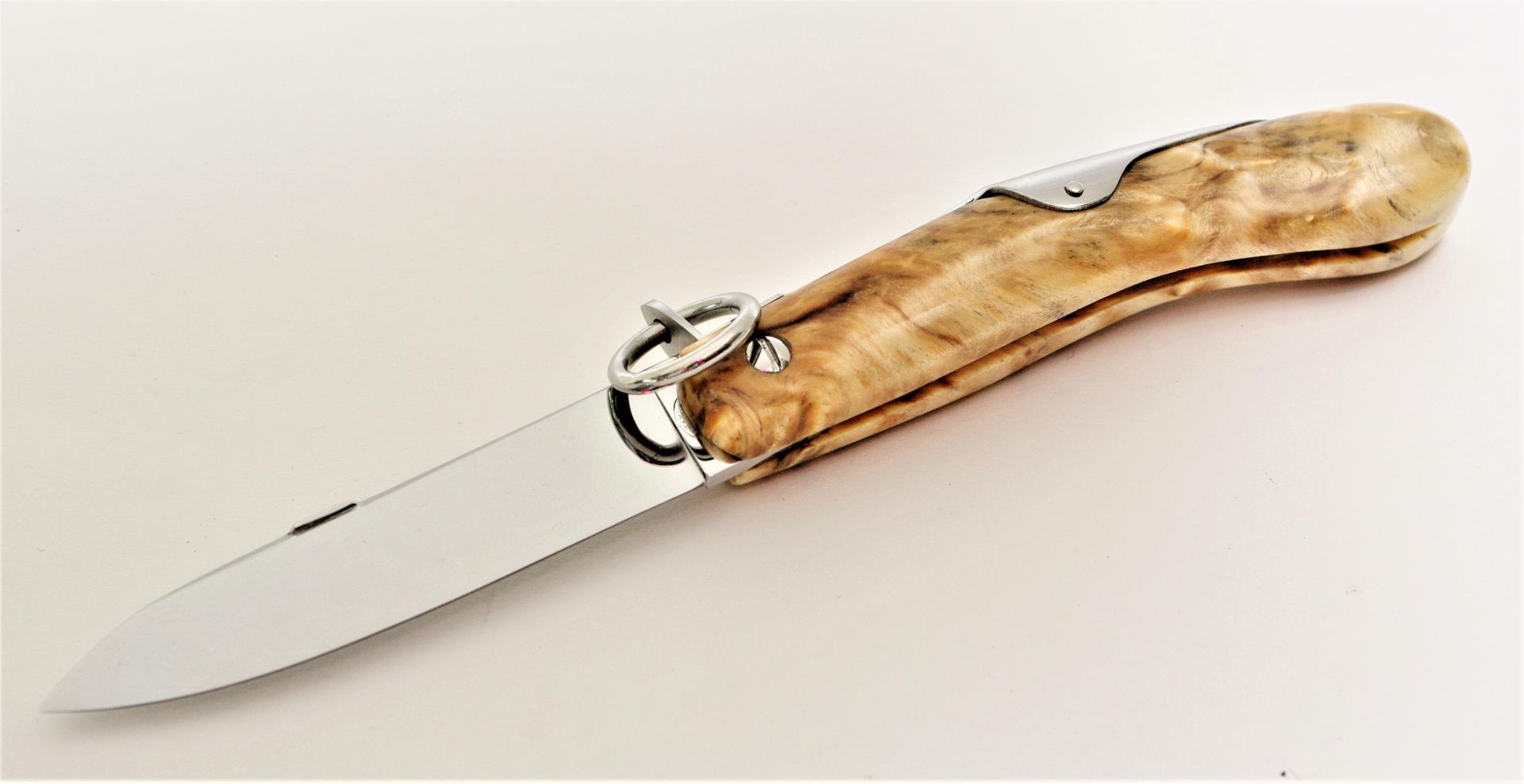 The ‘Milan’ by Coutellerie d’Art J. Mongin. The blade of this folding knife is Z40Cr13 steel. 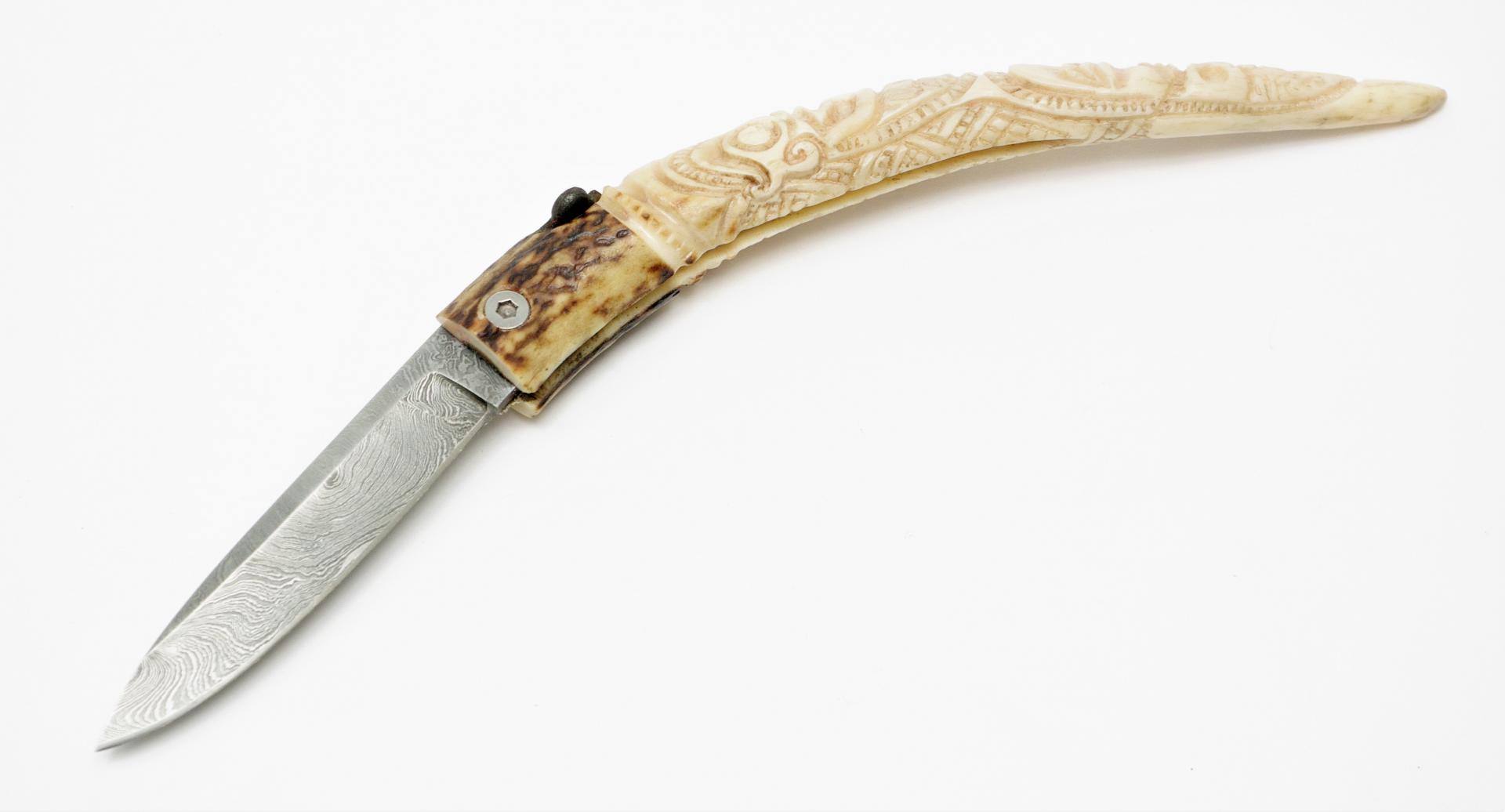 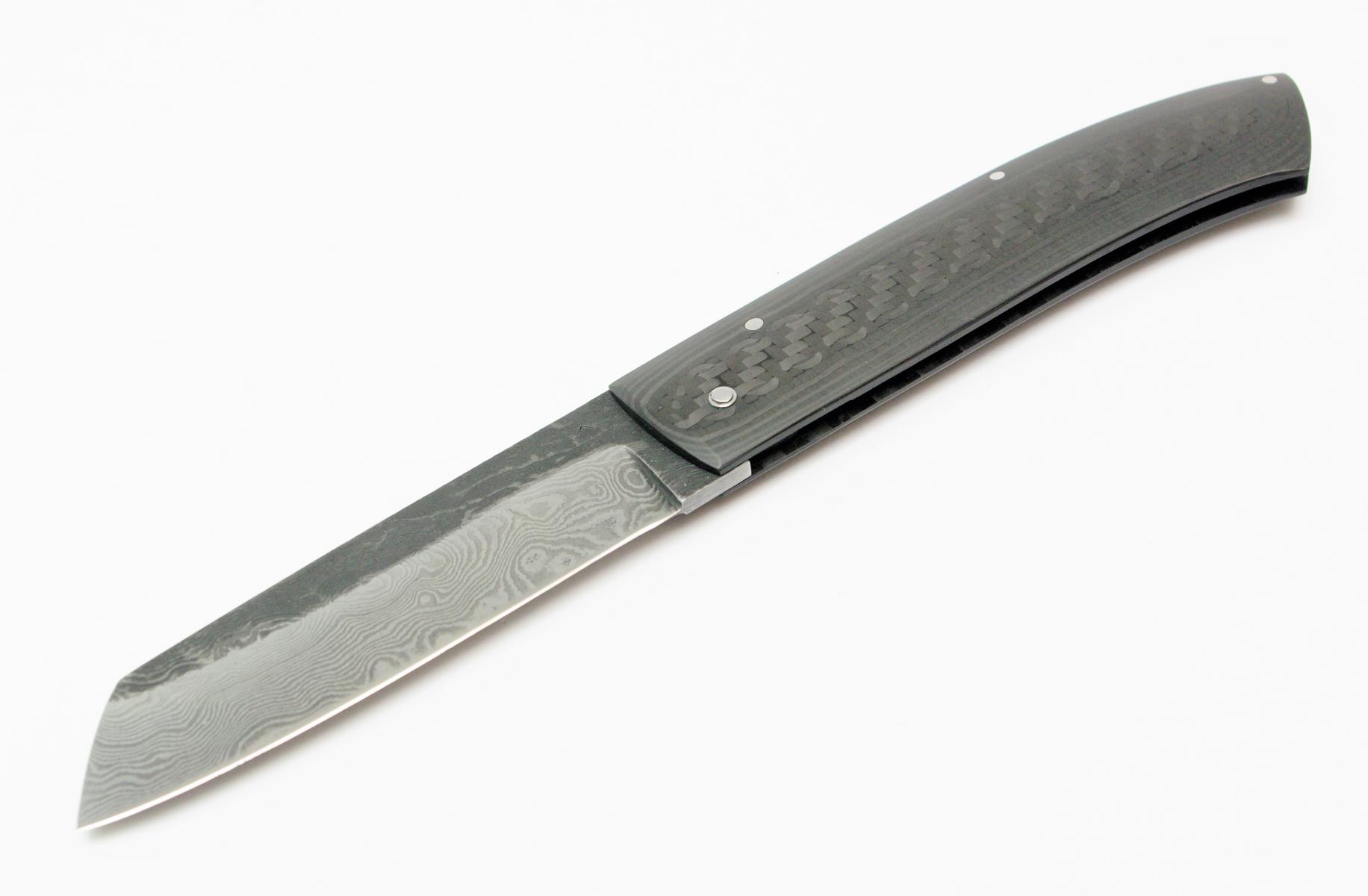 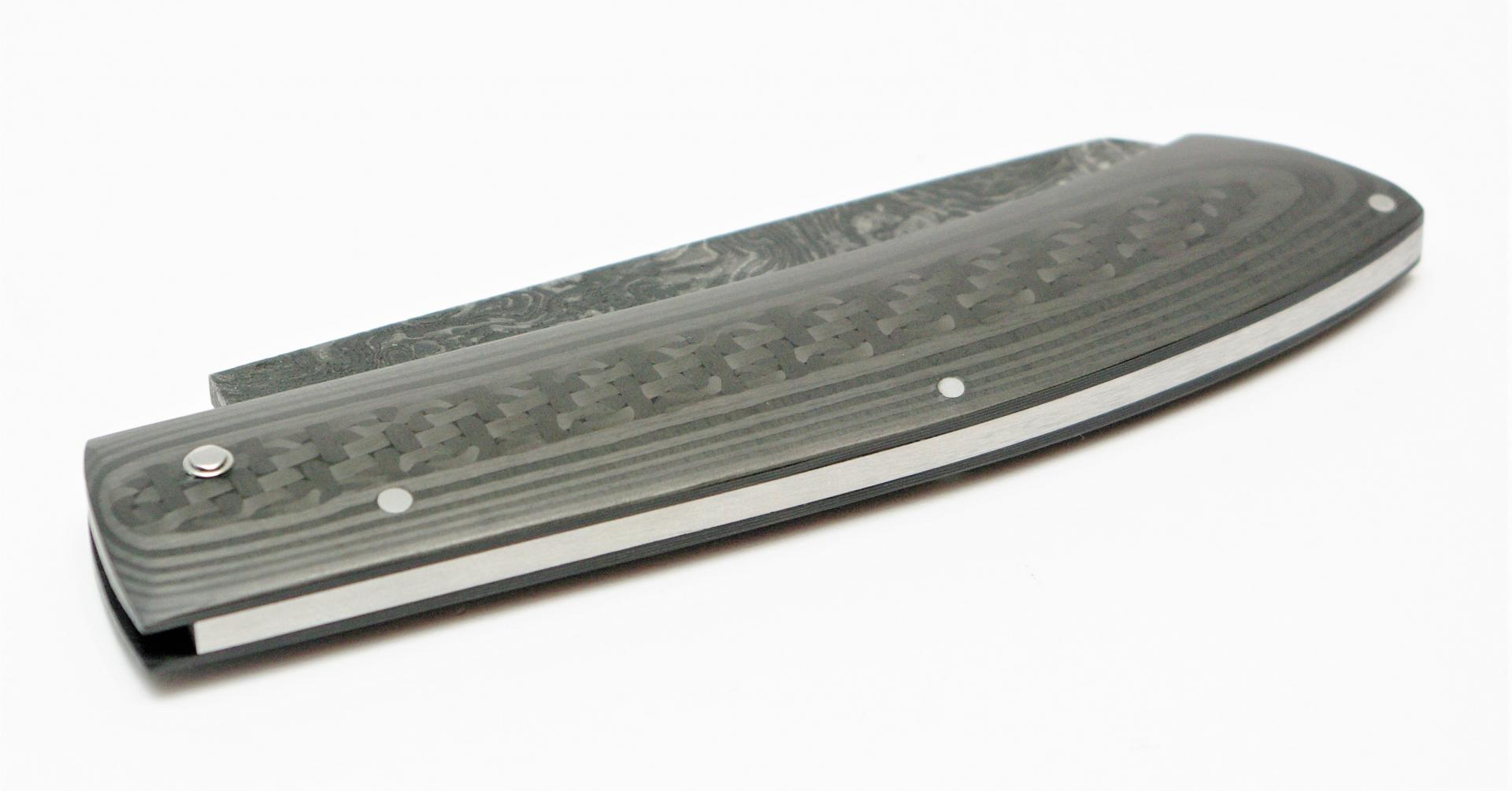 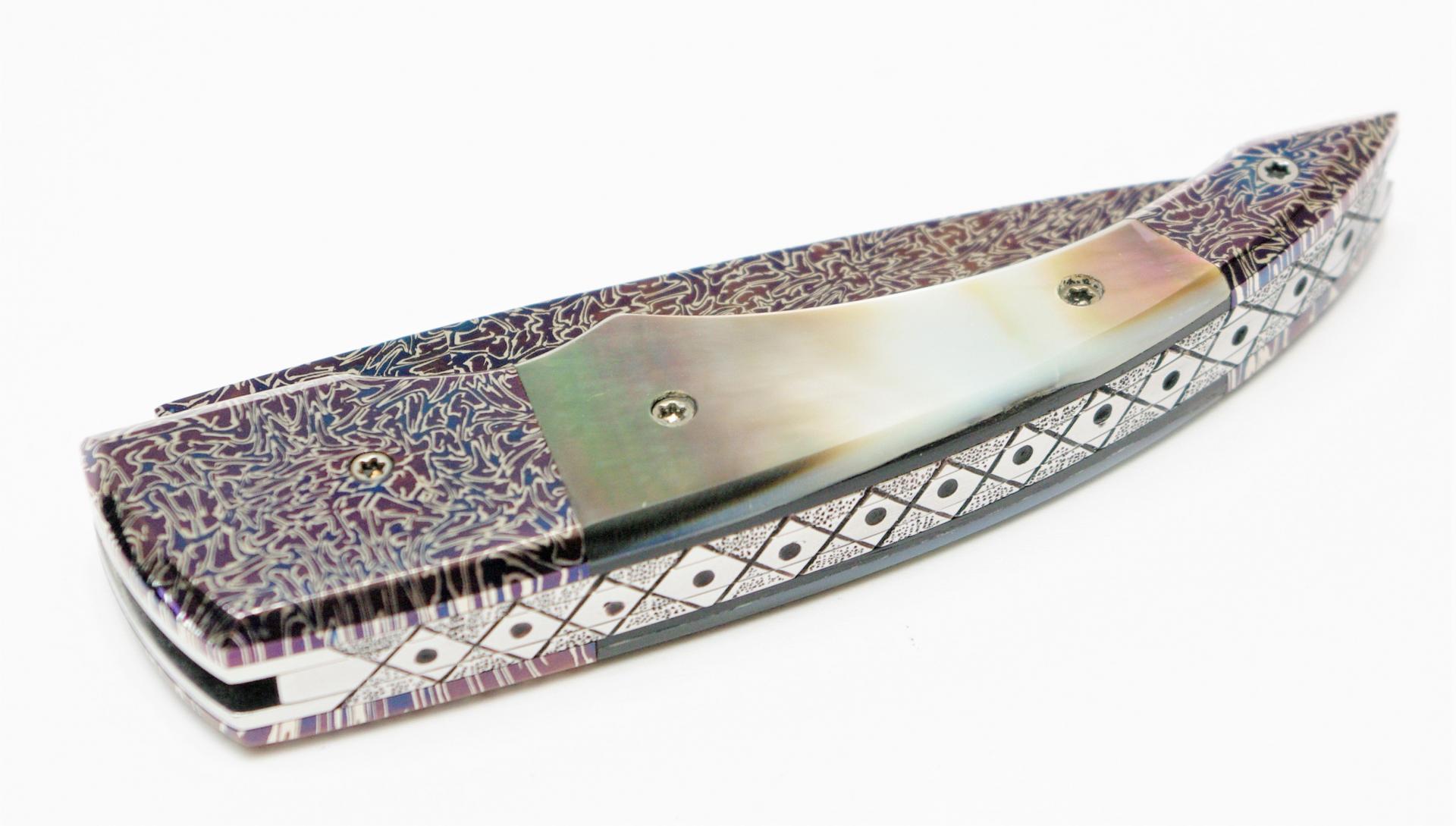 French knife maker Franck Herpin presented this hunting / outdoor knife. The 23 cm blade is made from
multi-bar Damascus. The handle is a combination of Reindeer antler an Turkish walnut. The sheath was
made by ‘Les Cuirs de Belfeuil’. 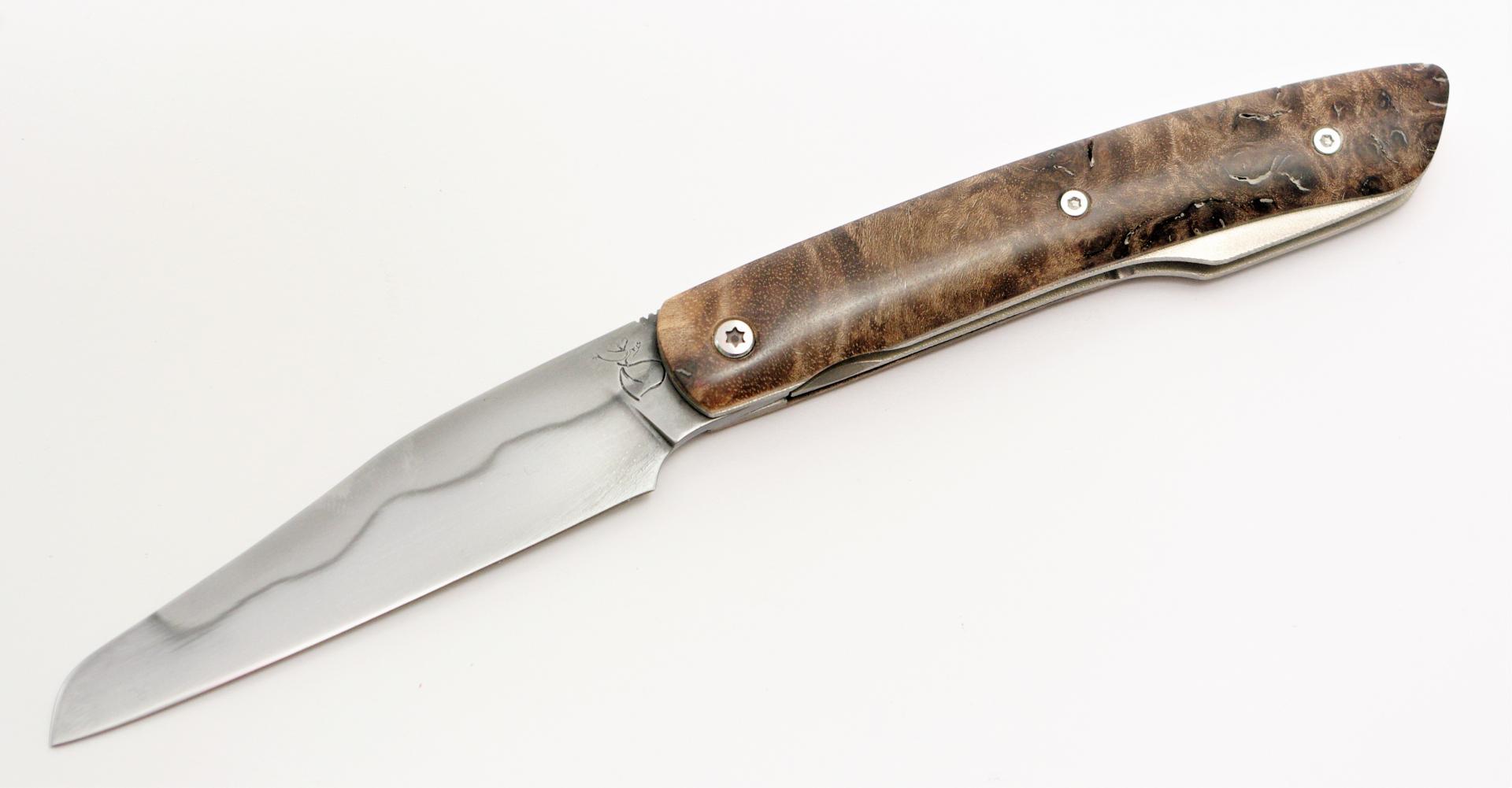 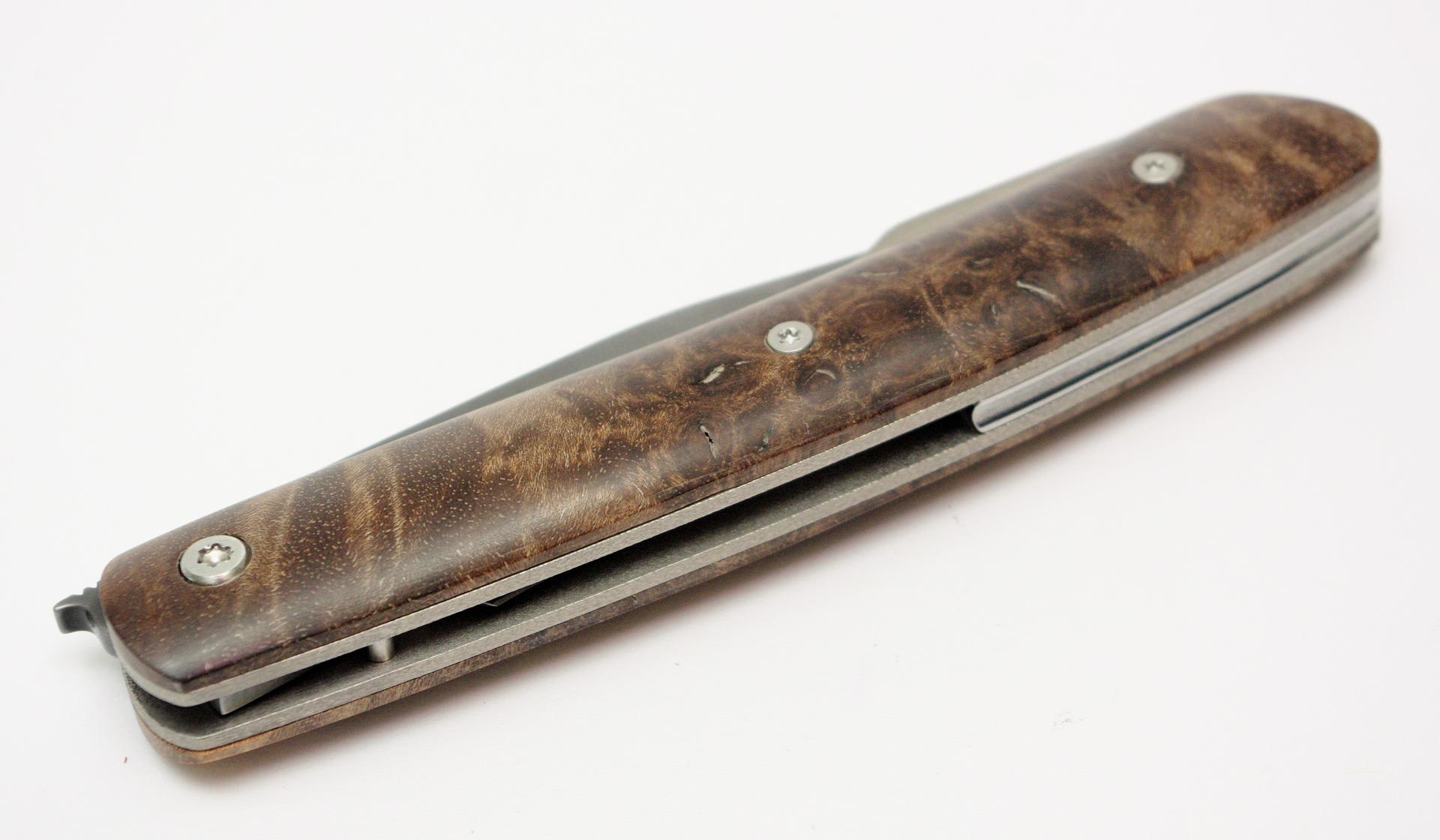 The ‘Kamino’ bij French knife maker Michel Grini. The liner lock folding knife has a XC100 blade and
titanium liners. The handles are made from stabilised burr walnut. 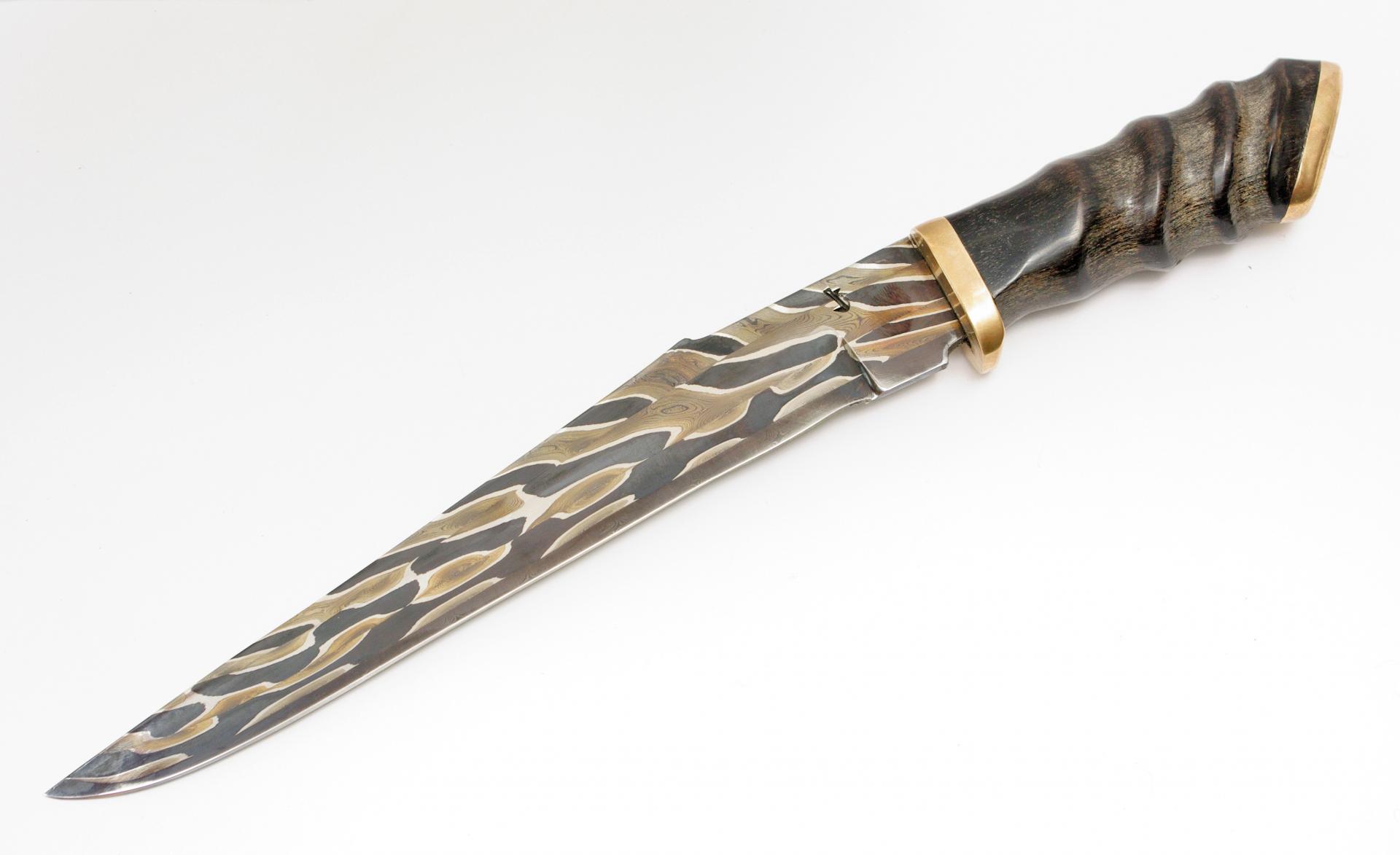 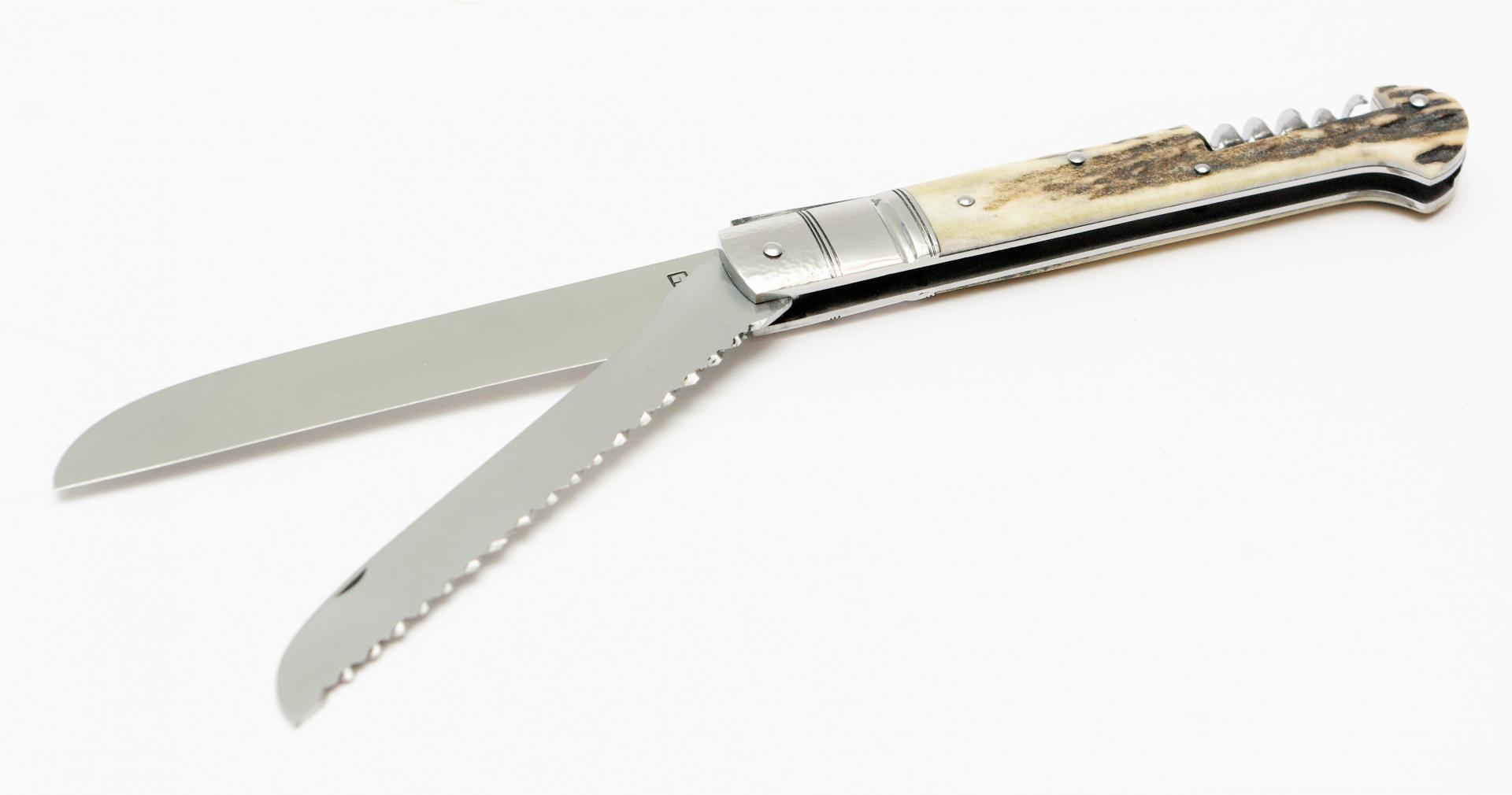 A double-bladed folding knife by French maker Romain Alvarez. The straight blade is N690, the serrated
blade is Z40Cr13. Both are slip-joints, each with its own spring. The corkscrew is made from XC48 steel.
The handle material is deer antler, with hammered bolsters. The opened knife measures 210 mm.

‘Le Cellois’ by French knife makers Nathalie and Stéphane Robin. The slip-joint folding knife has a 4 mm
blade from Carbon Damask and handles from mammoth tooth and Carbon Damask with screw heads in
the shape of a Templar’s Cross. The spring and spacer have extensive file work.