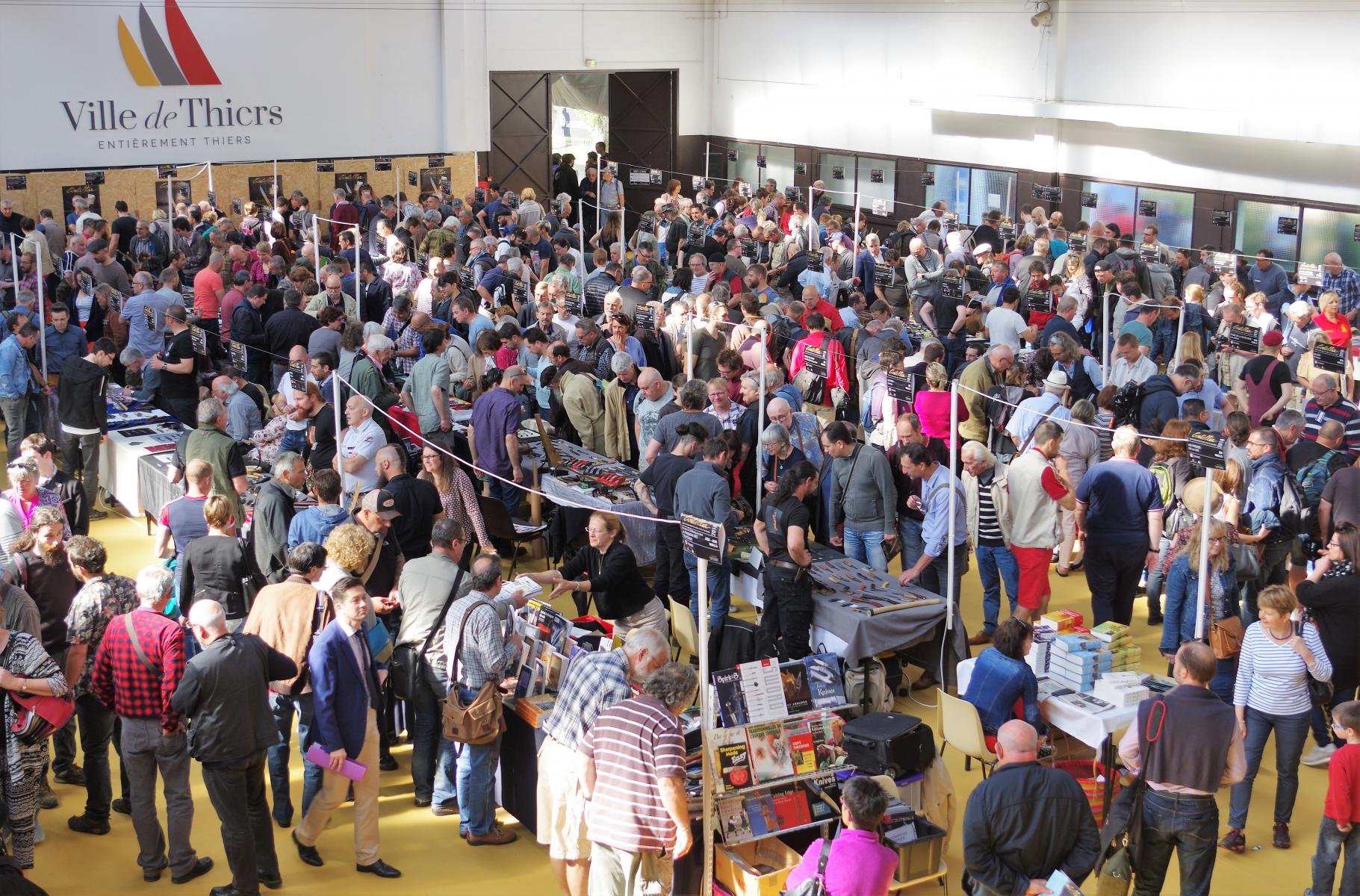 The main knife maker’s hall at the Coutellia, shortly after opening. This year, the show saw around 6.000 visitors.
With 230 exhibitors from 22 countries, the Coutellia in Thiers, France, can rightly be called an international knife show. Nonetheless, the event also serves as an important medium to stimulate the local knife industry and promote Thiers as one of the European knife capitals.

Every year, the organising Chamber of Commerce and Industry (CCI) Puy-de-Dôme, prepares an excellent show-guide for the Coutellia. Most people just use it to find their favourite knife makers, but the introduction of the guide gives some insight in the reasons behind the event. In Thiers, knife making is very alive. There are 80 knife making companies, who employ over 1600 people. The vast majority of these companies also export their products, mostly inside the European Union, but also to the USA, Canada and Asia. Thus, the regional knife making industry is of importance to the economy as well. 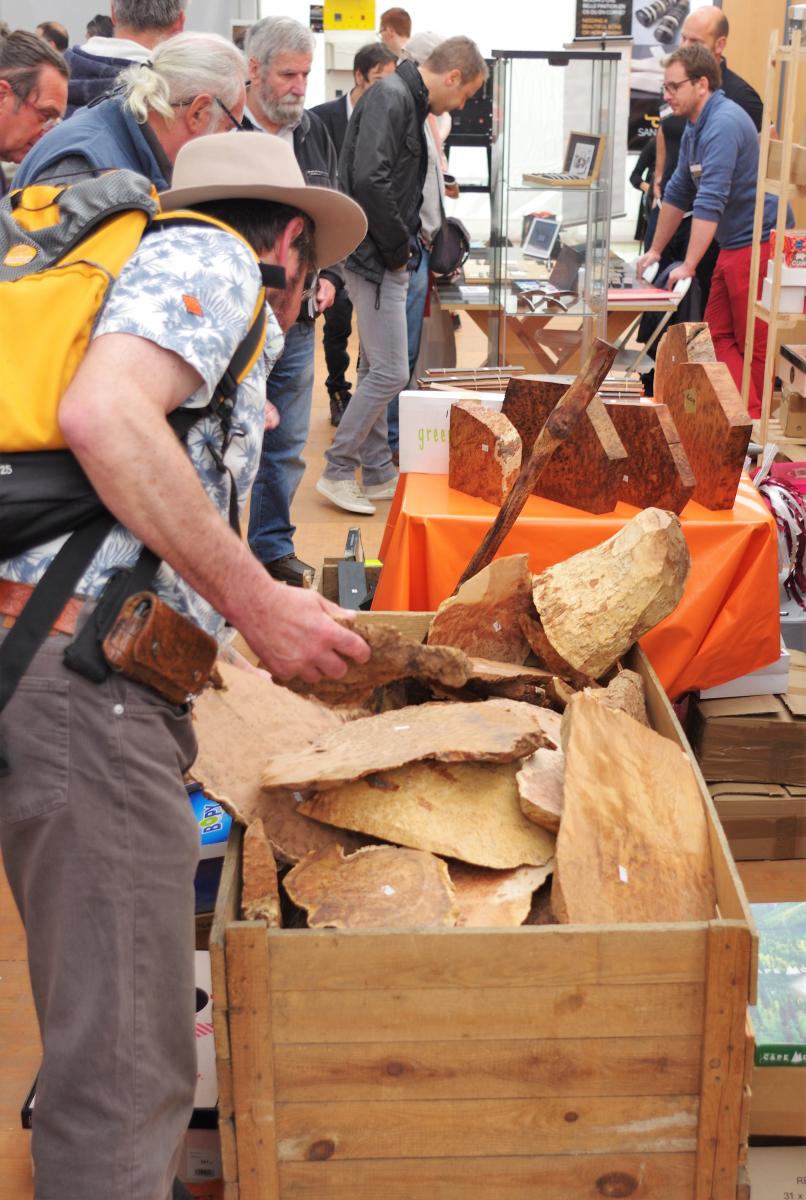 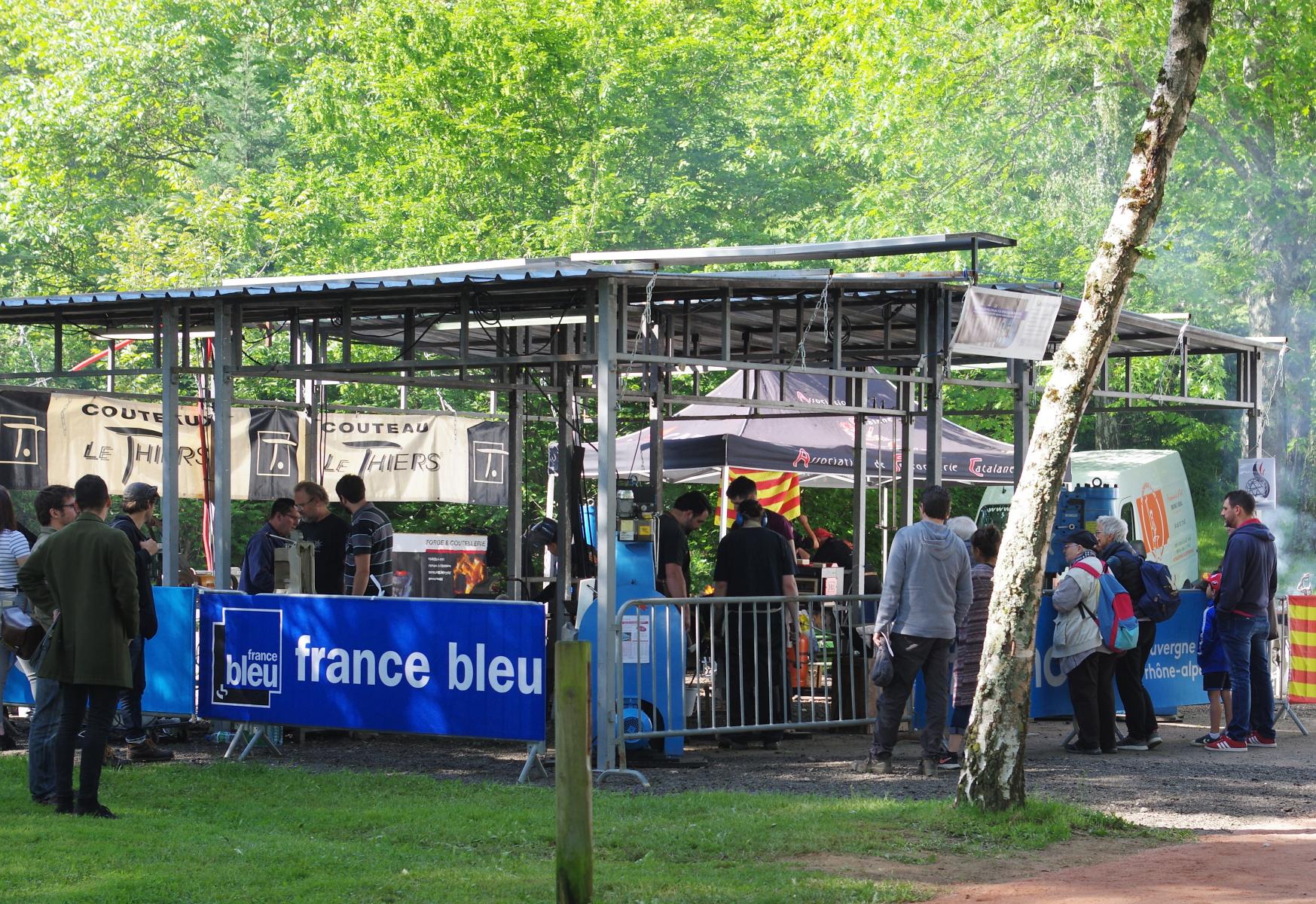 Left: For many knife makers, Coutellia is the perfect place to go shopping. Steel, leather and many kinds of handle materials are abundant. Right: The forging goes on for the whole weekend.

Then, there is the cultural aspect. There have been knife makers in Thiers for almost 800 years. They have a rich tradition that is both worth preserving and continuing. Thus, the parties involved have decided to make the best of use of all these different aspects for the promotion of Thiers and its knife makers.
The most eye-catching of these is the Coutellia. The 28th edition, held on the 19th and 20th of May this year, drew ca. 6.000 visitors and showed many of the aspects involved with present-day knife making. There are two halls for the major knife exhibitors, and a separate hall for the suppliers of knife making- materials and equipment. There is the ‘Village Coutelier’ (knife making village) with forgery demonstrations, and the adjacent terrain is for smaller demonstrations and exhibitions. 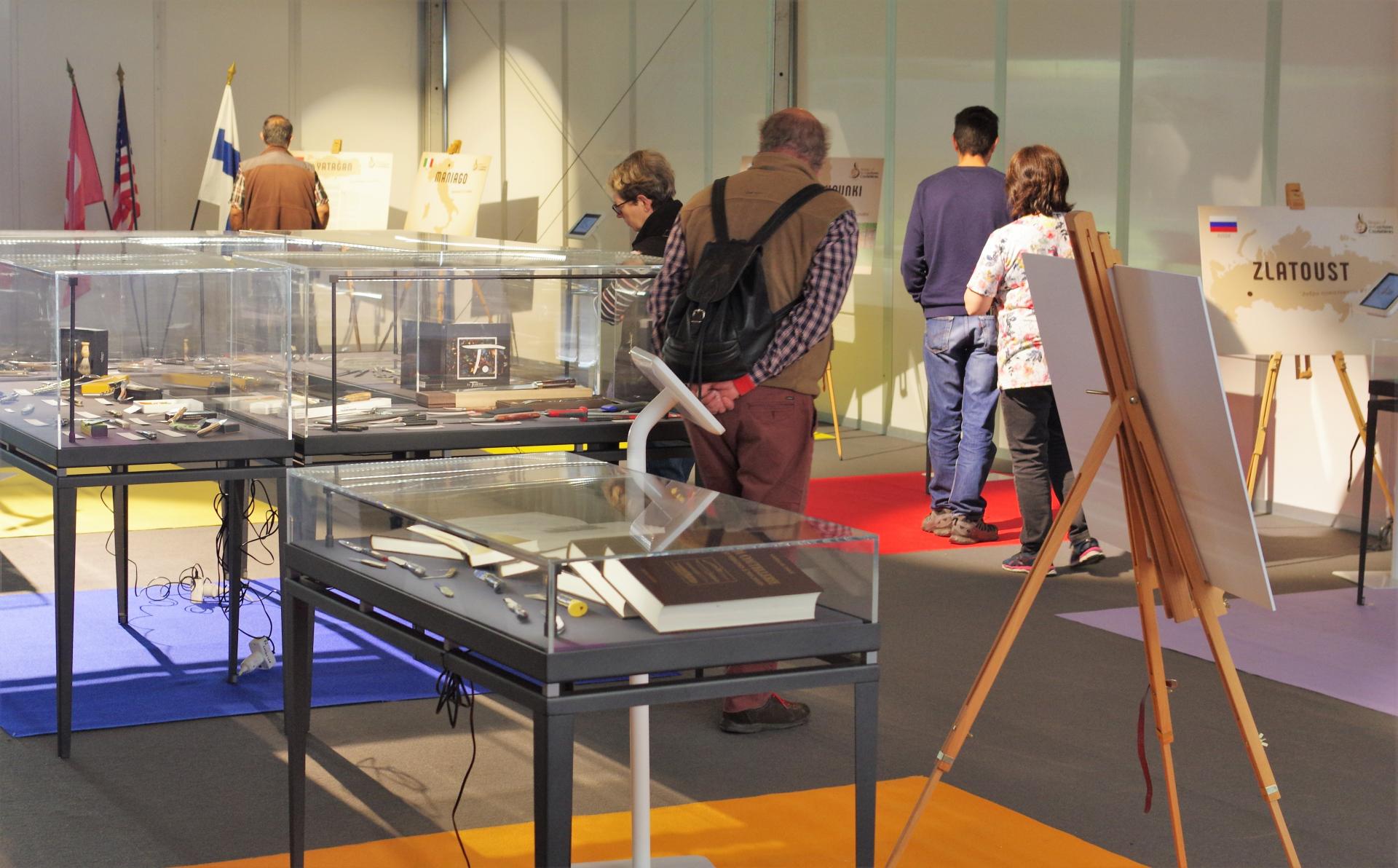 Thiers is seeking cooperation with other ‘knife capitals’ and this resulted in a special exhibition hall with the ‘1ère Collection Mondial de Coutellerie’, where knives were presented from Gabrovo (Bulgaria), Mikulasovice (Czech Republic), Zlatoust (Russia), Uusikaupunki (Finland), Solingen (Germany), Ybbsitz (Austria), Albacete (Spain) and Guimaraes (Portugal).
As per usual, the Coutellia held a ‘Concours’ for the knife makers. The prize winners (all from France) were:
1- Prix Coutellia: Nathalie Robin with ‘Le Cellois’
2- Prix du Jury: Eric Albarado with ‘Amanecer’
3- Prix de Public: Jean-Michel Remaud with ‘Inupiat’
Next year’s date for the Coutellia has already been set for May 18 and 19. For more information see www.coutellia.fr. 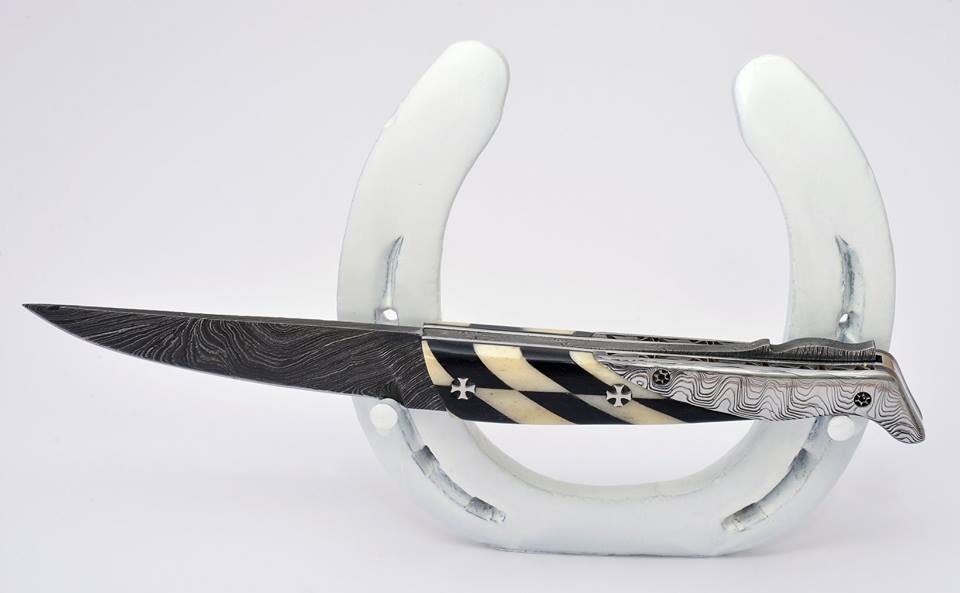 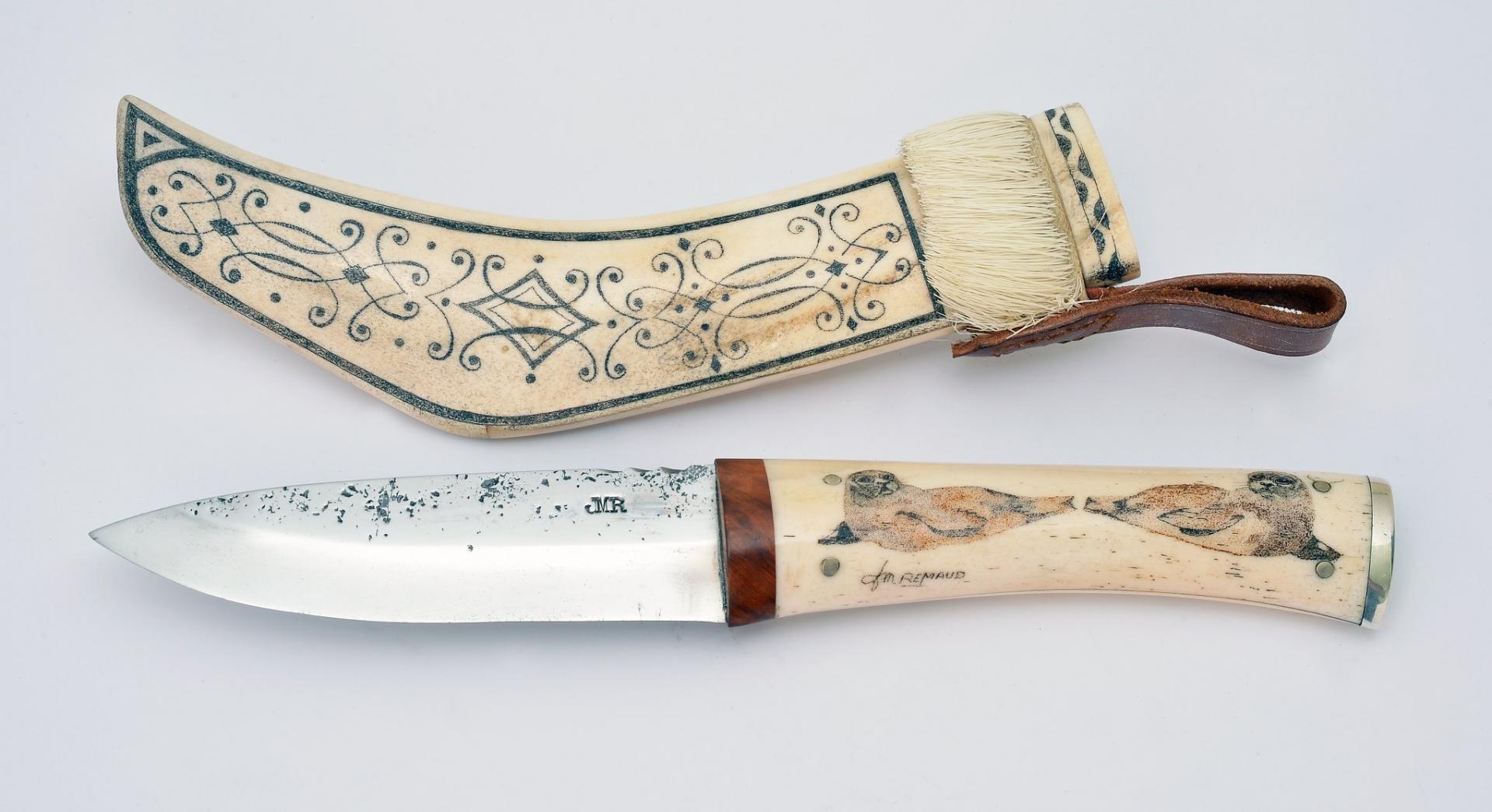 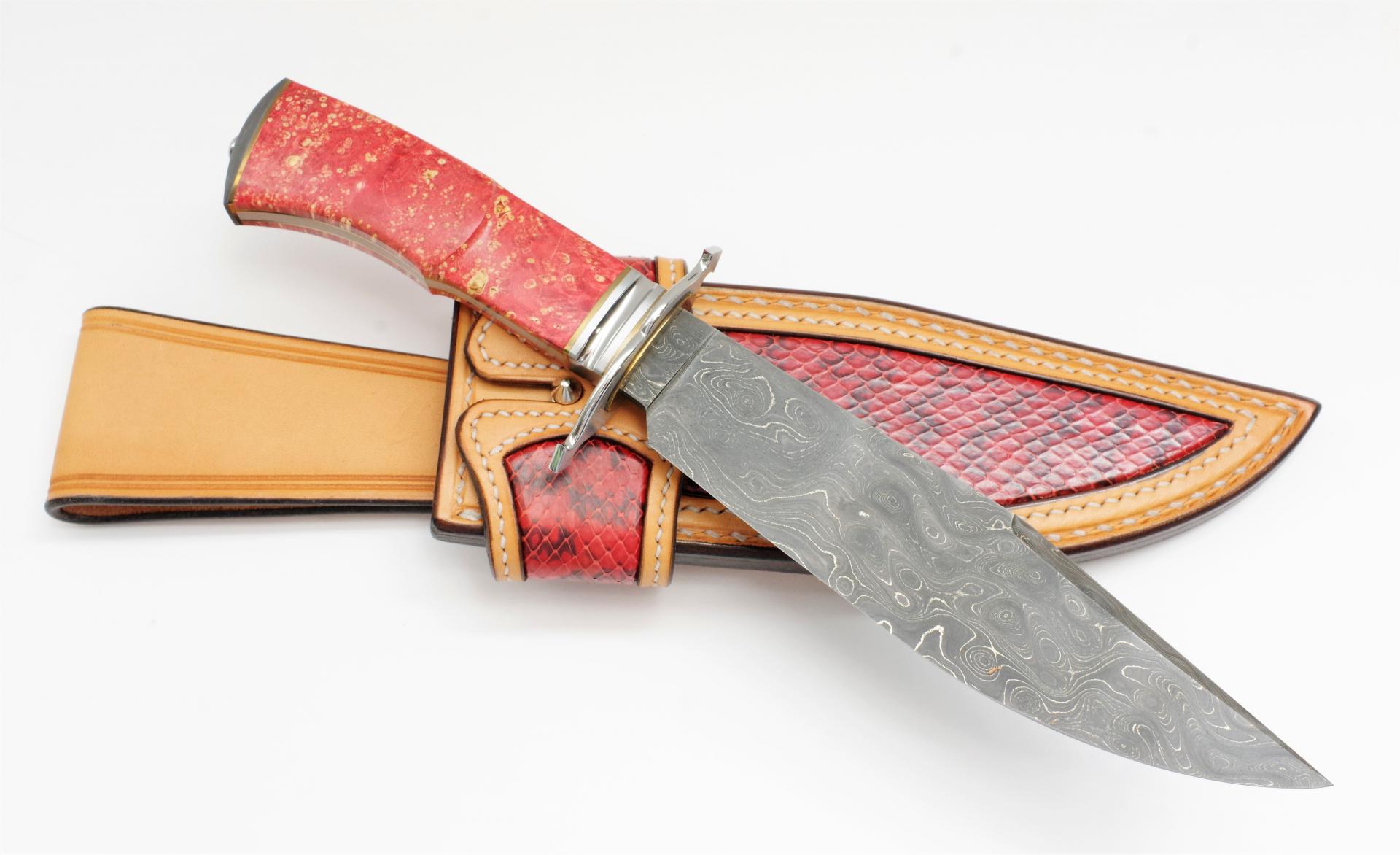 The ‘Red Maple’ by Italian knife maker Stefano Compostella. The knife has a carbon Damascus blade of
1095 / 75Ni8 / 5160 steels. The handle is made of AISI 416, Titanium and stabilised Maple. The sheath is
made by F. Nova. 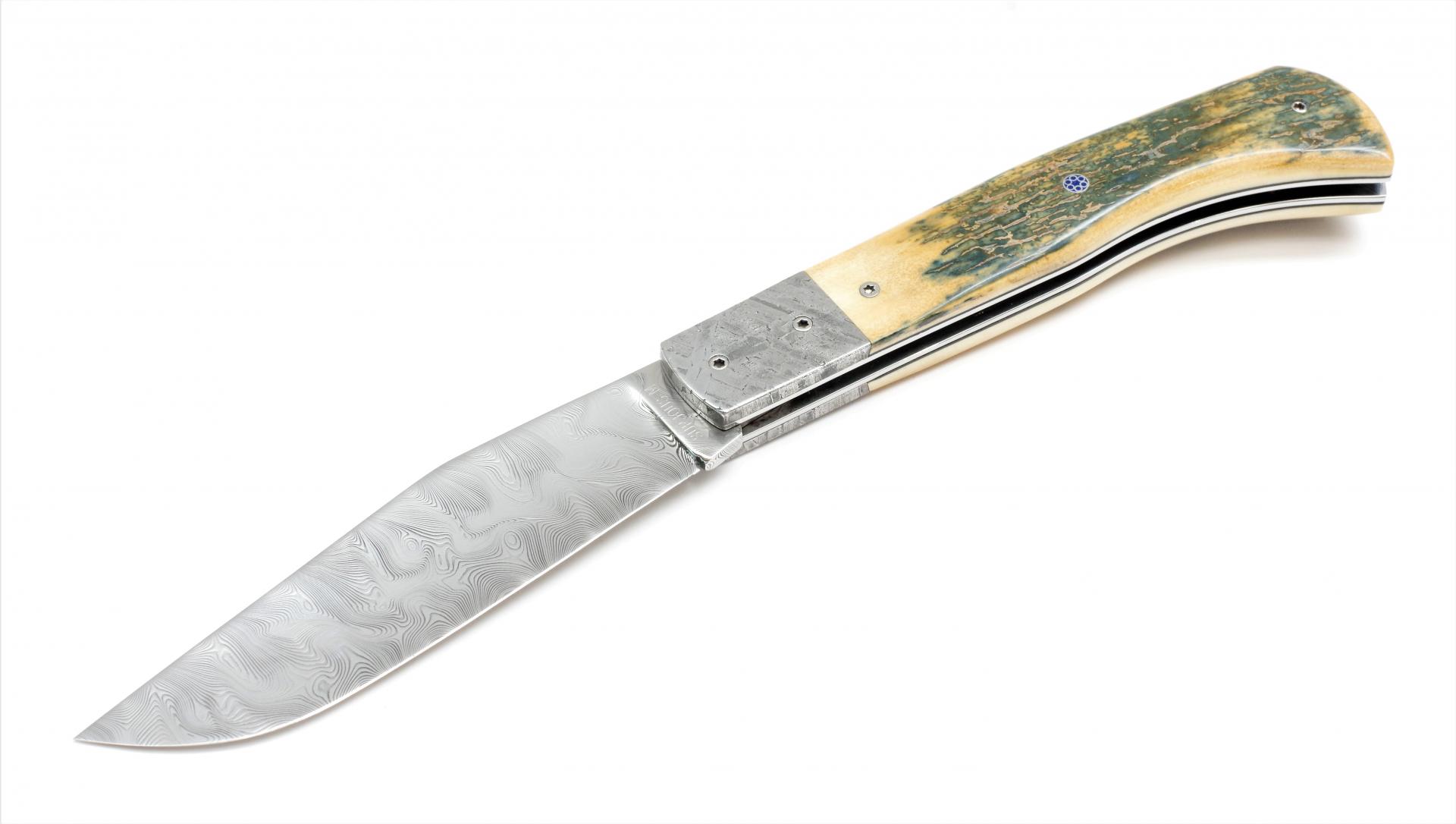 The ‘Lailloux’, a French knife model, by French maker Maxime Surjous. The blade is made of ‘Bjorkman
Twist inox Damascus, the handle is blue Mammoth with meteorite bolsters. 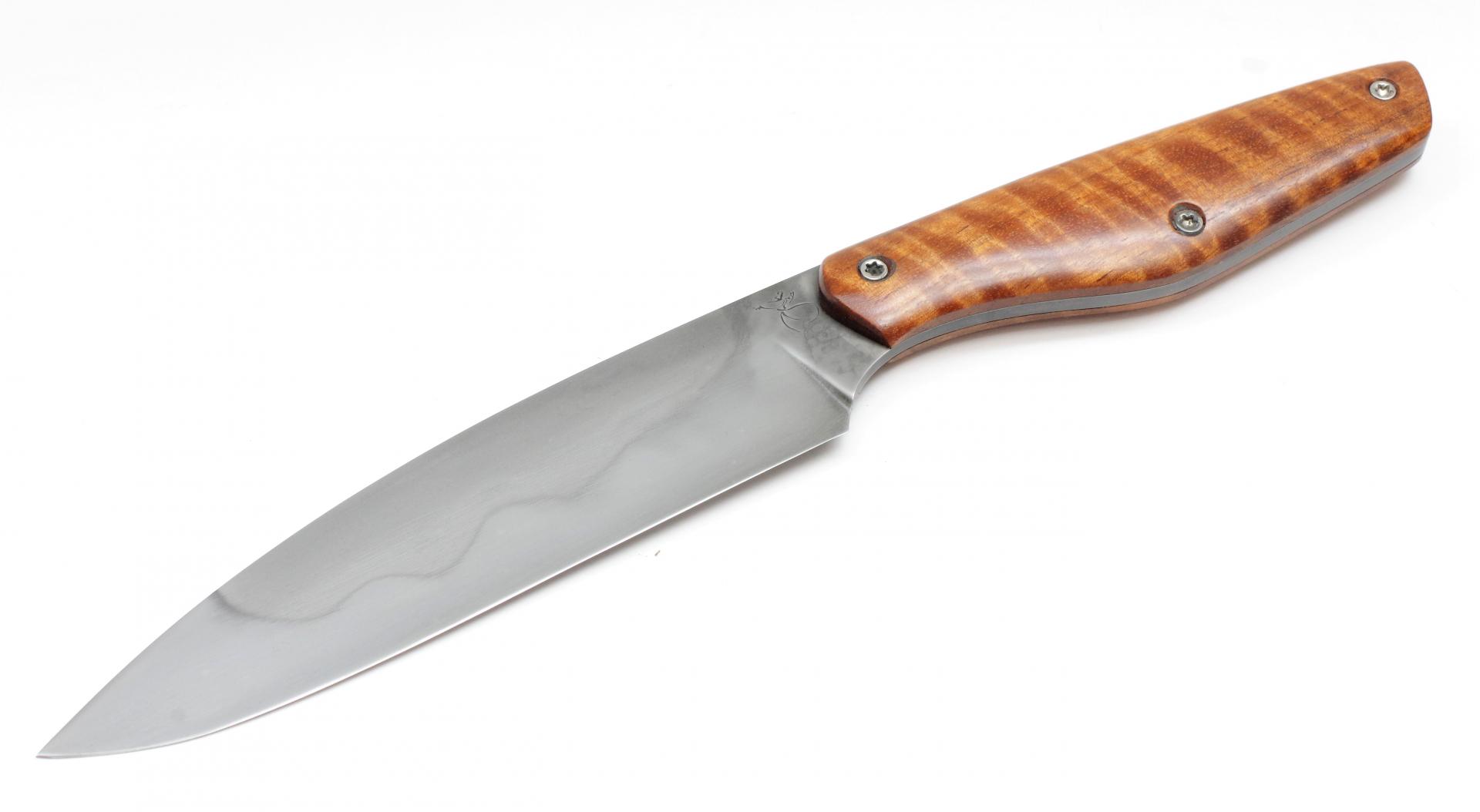 The ‘Makalu’ by French knife maker Michel Grini. The blade is xc 100 (1095) carbon steel and the handle
is made of Sri Lanka Satinwood. 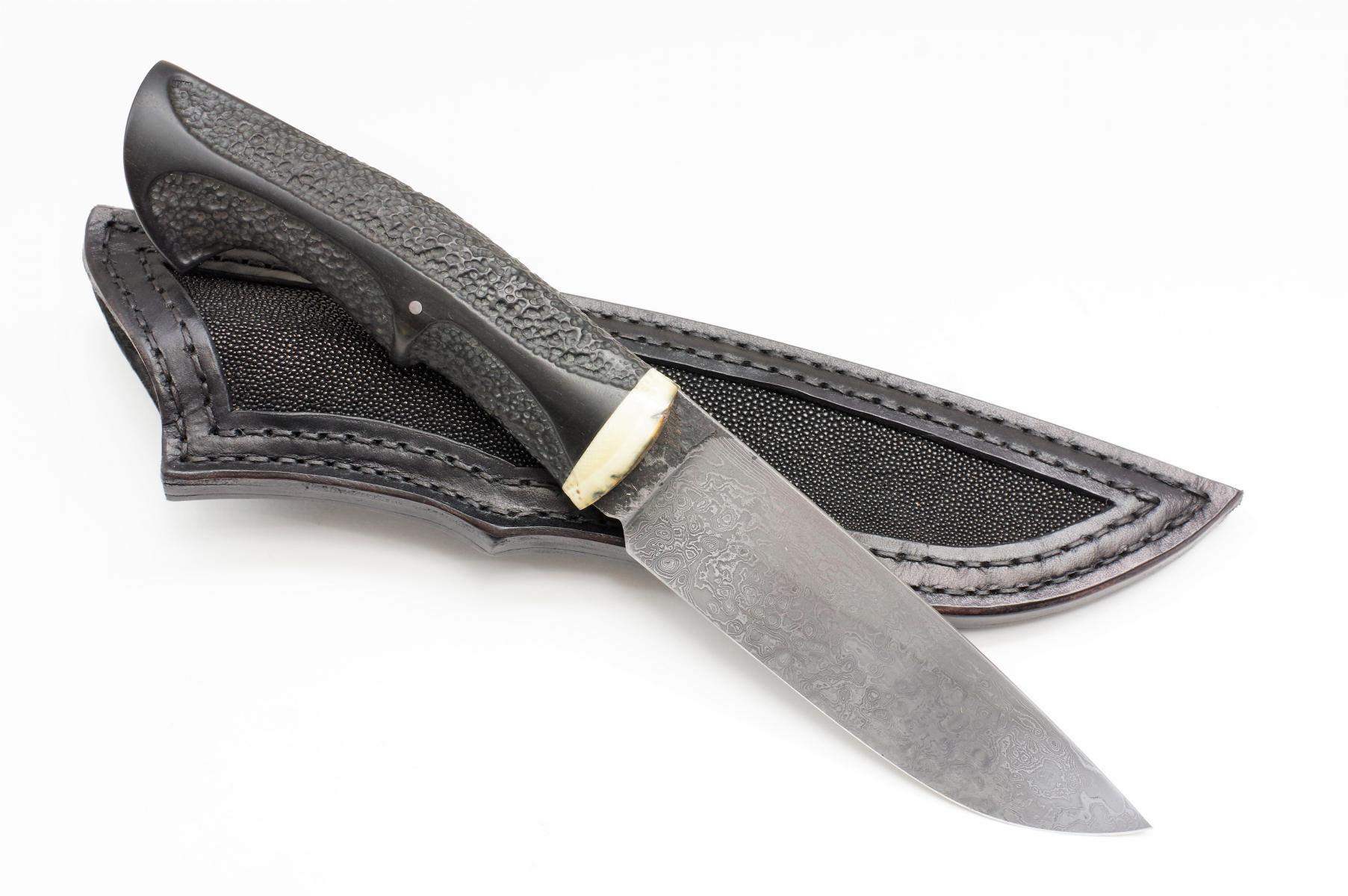 A Puukko by French knife maker Mickael Moing. The blade is Damascus, the handle is sculpted Ebony
and Mammoth. 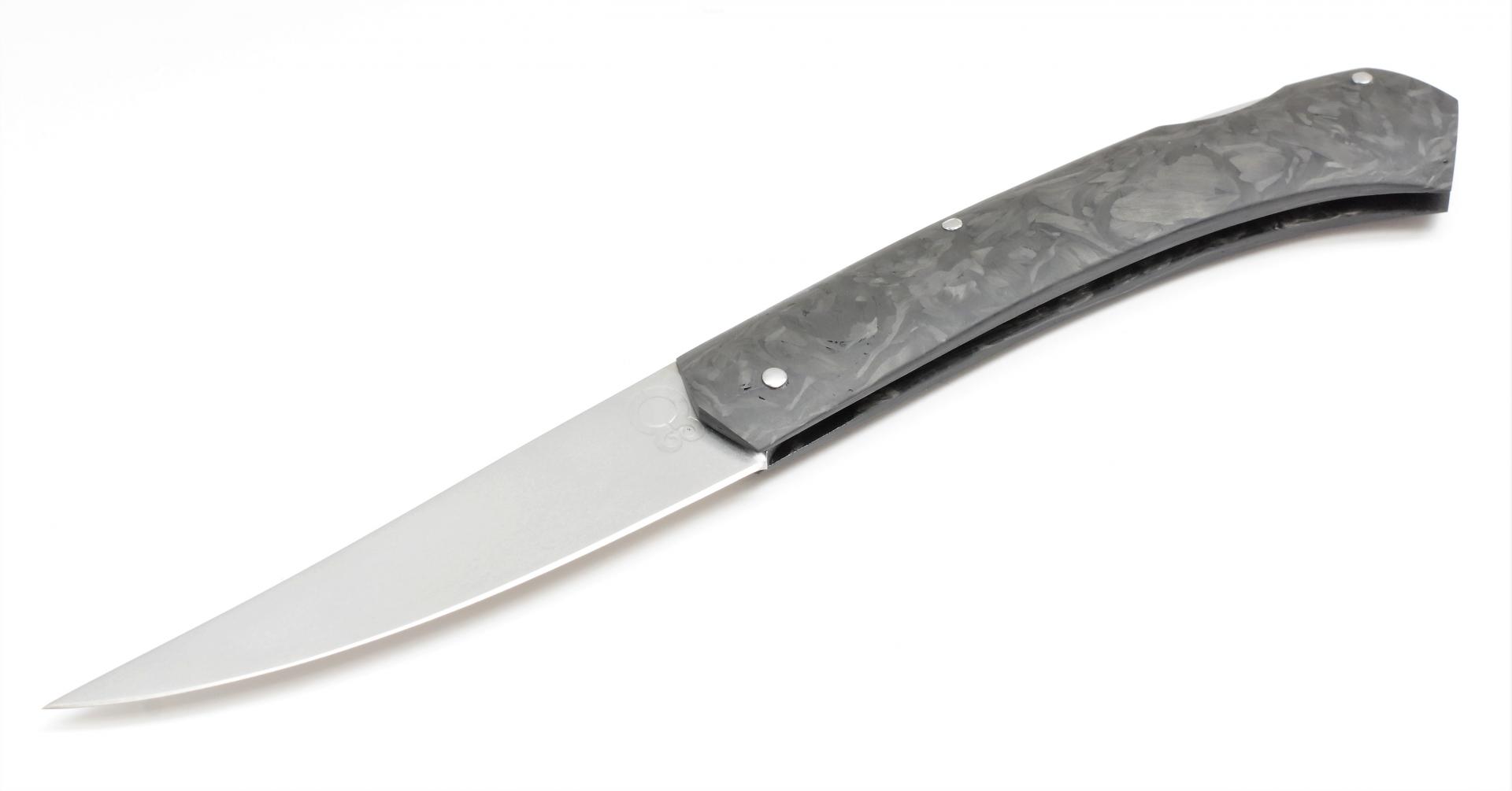 French knife maker Nicolas Muros le Rouzic (Norse Artefakt) made this ‘Naeddre’. The 90 mm blade is
N690 steel, the handle is marbled Carbon Fibre. There are no liners. 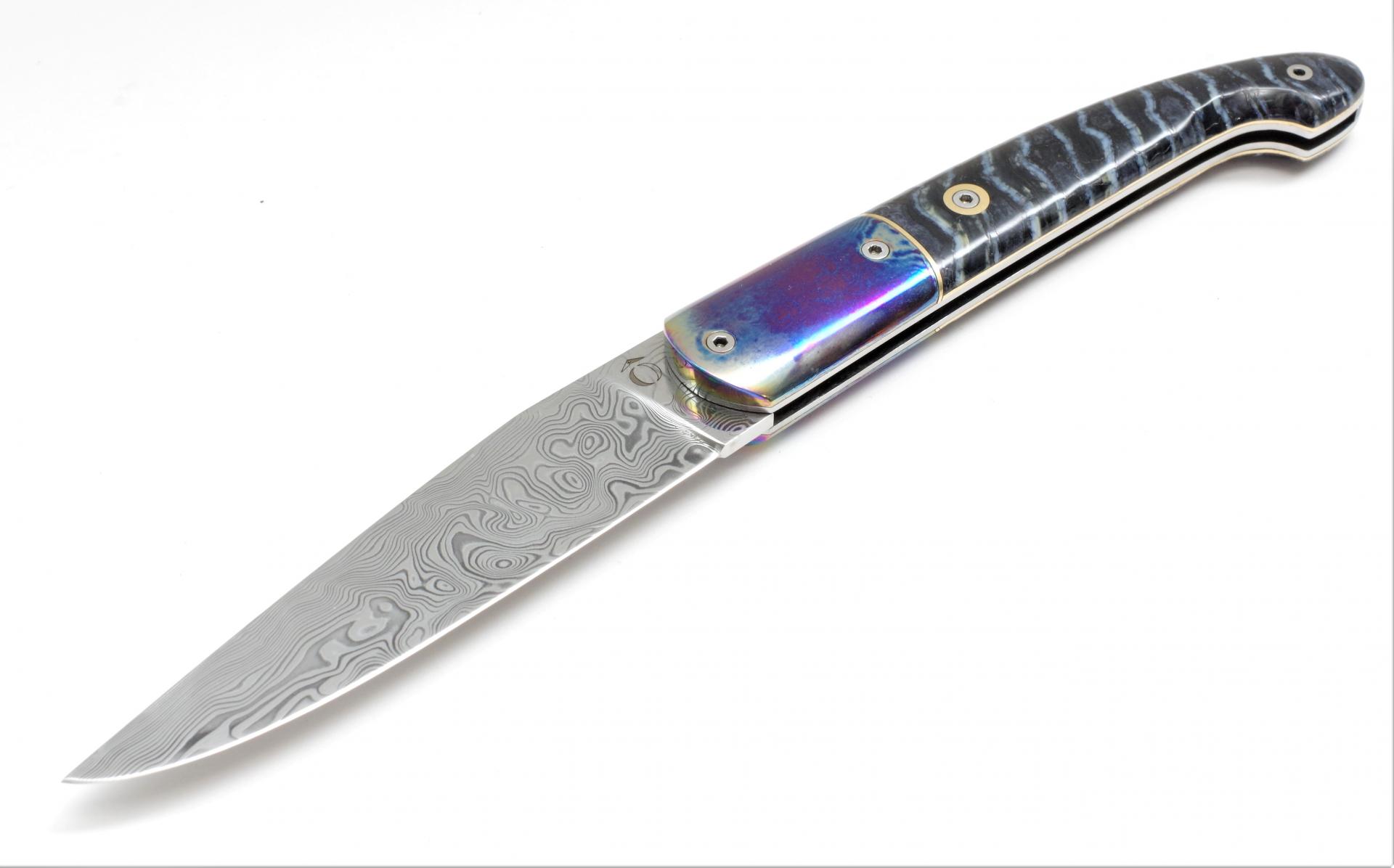 ‘Le Passager’ (the Passenger) by French knife maker Pierre Thomas (Atelier Ôdae). The blade is Damasteel
Vinland, the handle materials are Timascus and Mammoth tooth. The end spacer is Damasteel Vinland,
and the liners have had file work.

The ‘Wasp’ by Pieter Annandale (Ratelknives). The blade and bolster of this linerlock folding knife are Damasteel, the handle is Recon Stone. 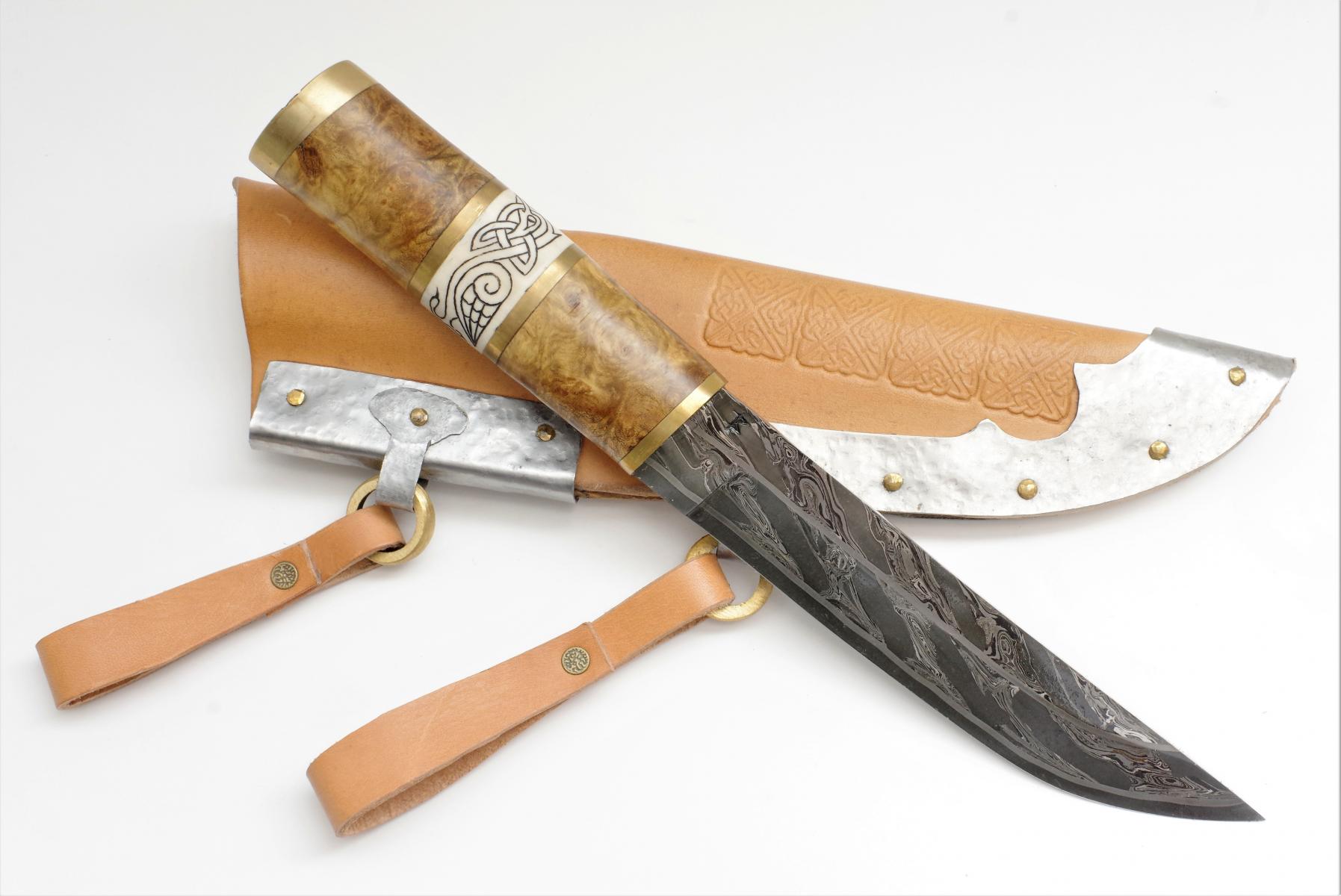 The ‘Petit Seax’ (little Seax) by French maker Hervé Maunoury. The blade is multibar ‘black-out’ Damascus,
consisting of 15N20 / 90MVC8 / C130 and pure Nickel. The handle consists of bronze, engraved deer antler,
and maple burl. The knife was inspired by the original Viking Seax, with a horizontal sheath.

French Knife maker Nicolas Couderc is known for his regular geometrical shapes. This knife is called the
O2. It has a 14C28N blade. The handle has colour pencils inlays. 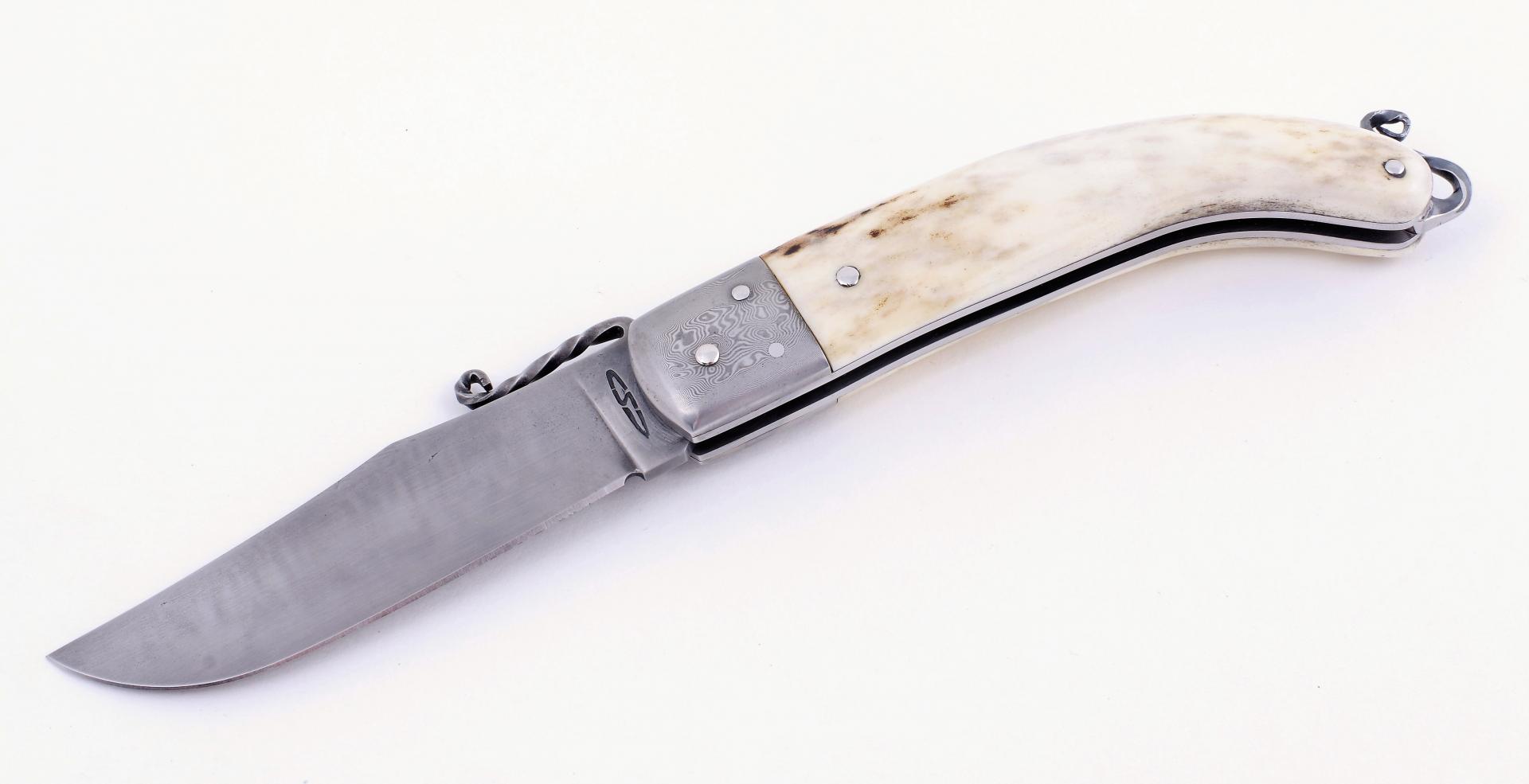 The ‘Corsaire’ by French knife maker David Saez. The blade of this folding knife is made of XC100 steel,
the handle is deer antler.

A Puukko by Forge Viruce. The blade is home-made Wootz, the handle is made of stabilised Holm oak,
Buffalo horn and bronze. 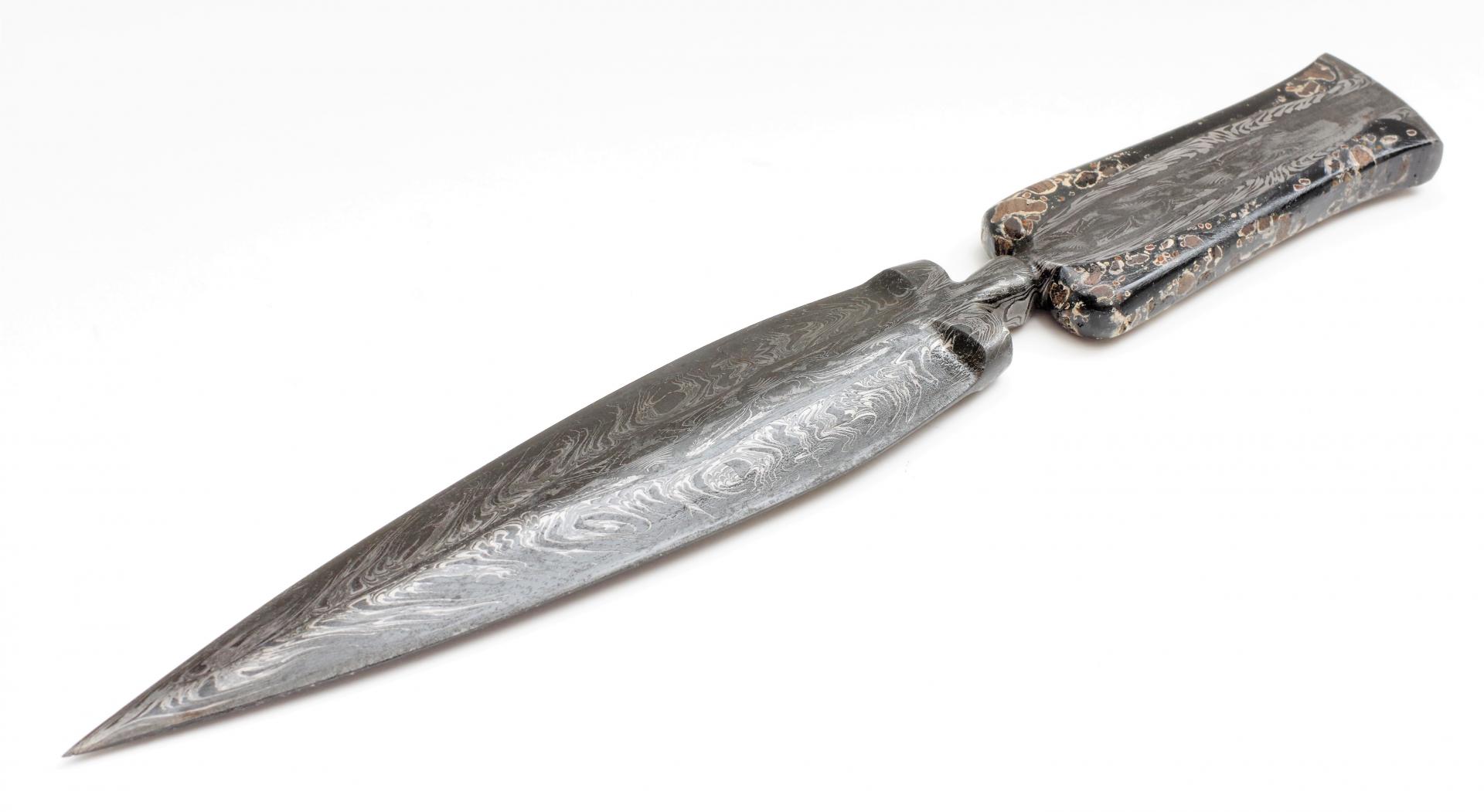 A ‘Daga Barocca’ (Baroque dagger) by Italian maker Moreno Feltresi. The blade and tang are 1.2842 and
15N20 Damascus. The handle is Epoxy resin, cord and oxide. The dagger measures to 24 cm. 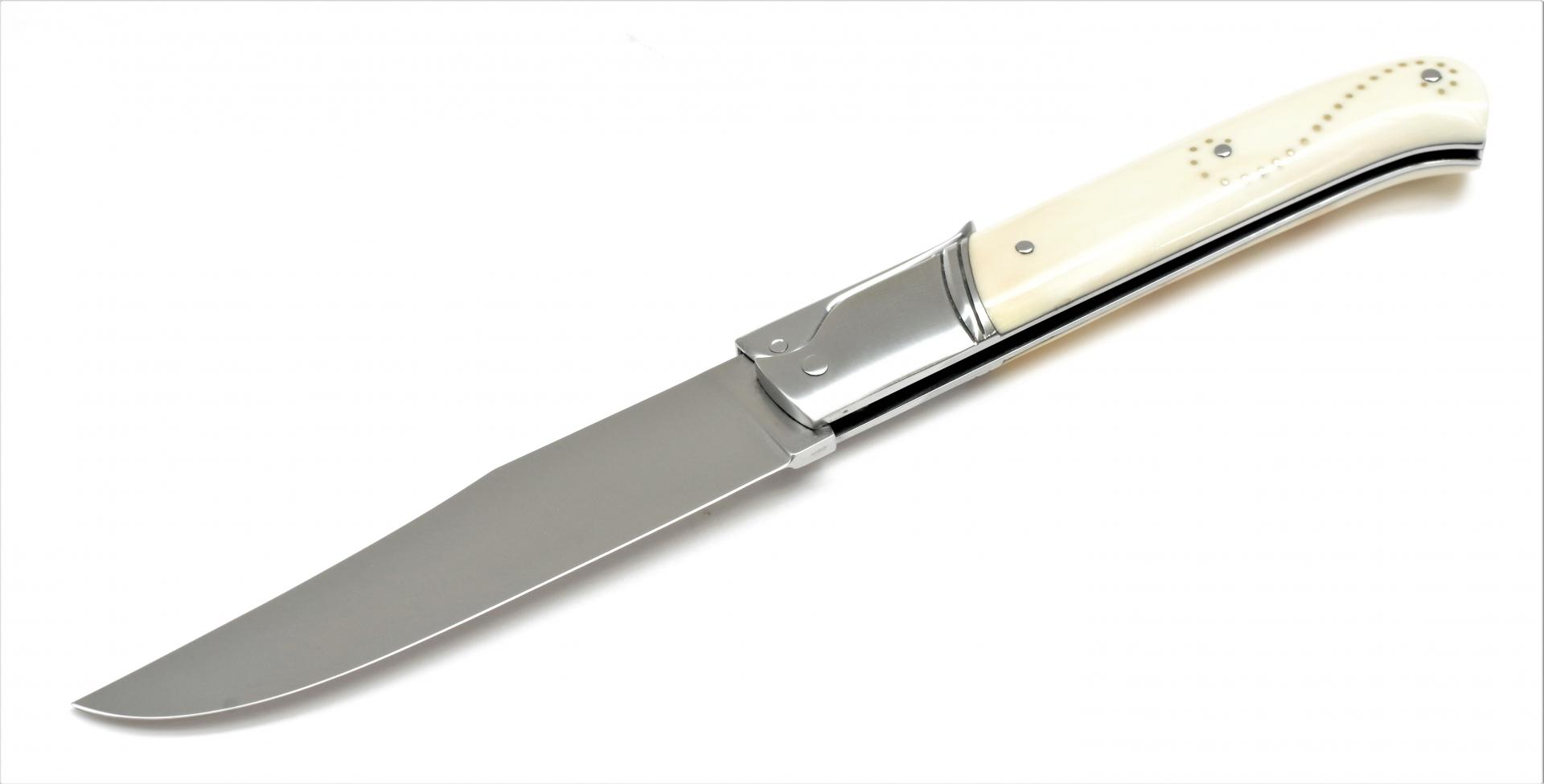 A folding knife by French maker Glenn Guillou. The blade is 14C28N steel, the bolsters and spring are
Z40Cr13 steel. The handle is warthog with brass pins in the shape of an arabesque. 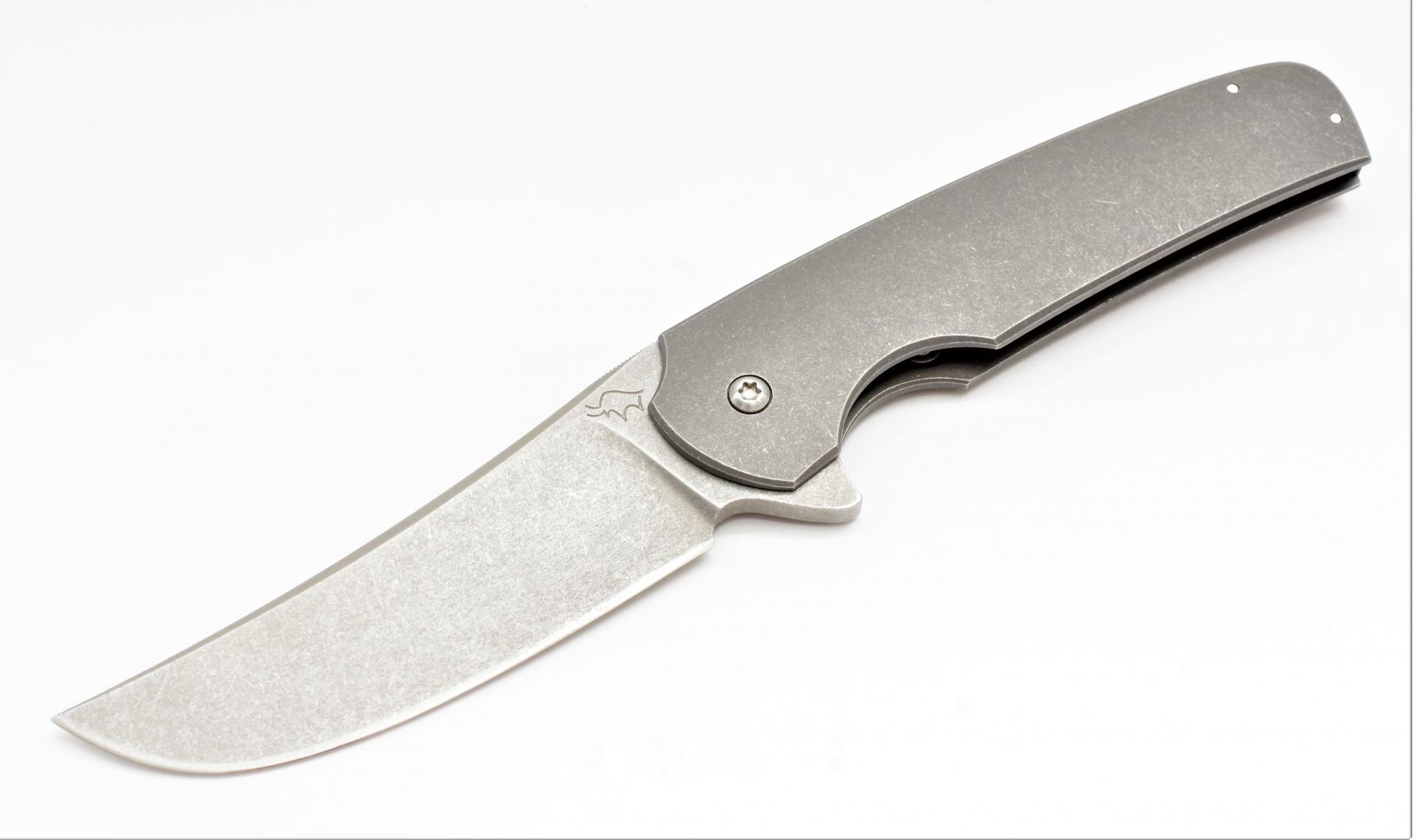 The ‘Hyder’ by French knife maker Guy Poggetti. The blade of the framelock folder is made of N690, the
handle is Titanium. The opened length is 205 mm.

The Trapp ‘Flipp’ by French knife maker Jean-Baptiste Leveque. The blade is D2 steel, the handle is made
of Timascus and marbled Carbon Fibre. The blade length is ca. 95 mm. 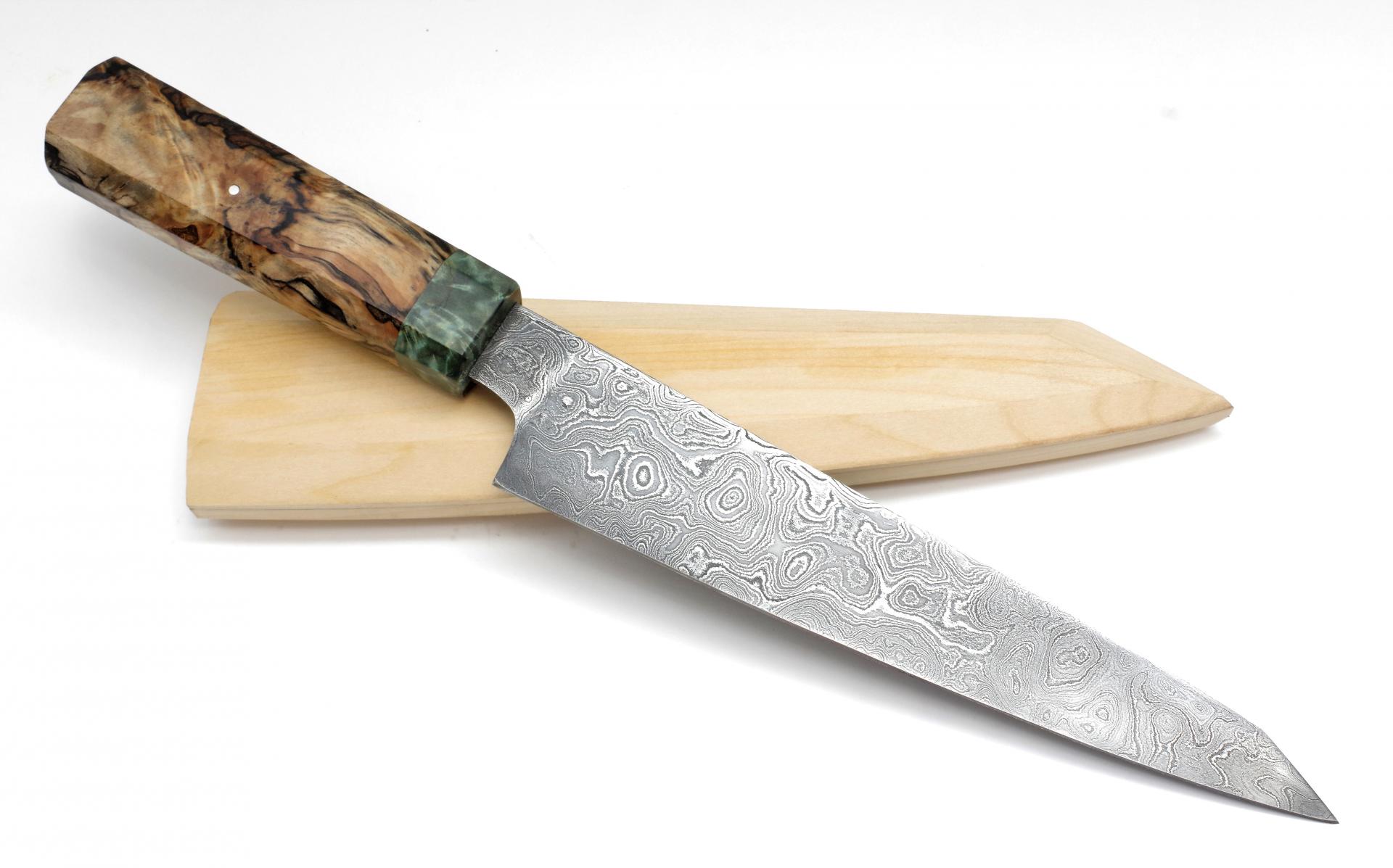 The ‘Kitchen XL’ by Belgian knife maker Jean-François Colla. The knife has a Damascus blade. The handle
is made from Birch and blue stabilised poplar. 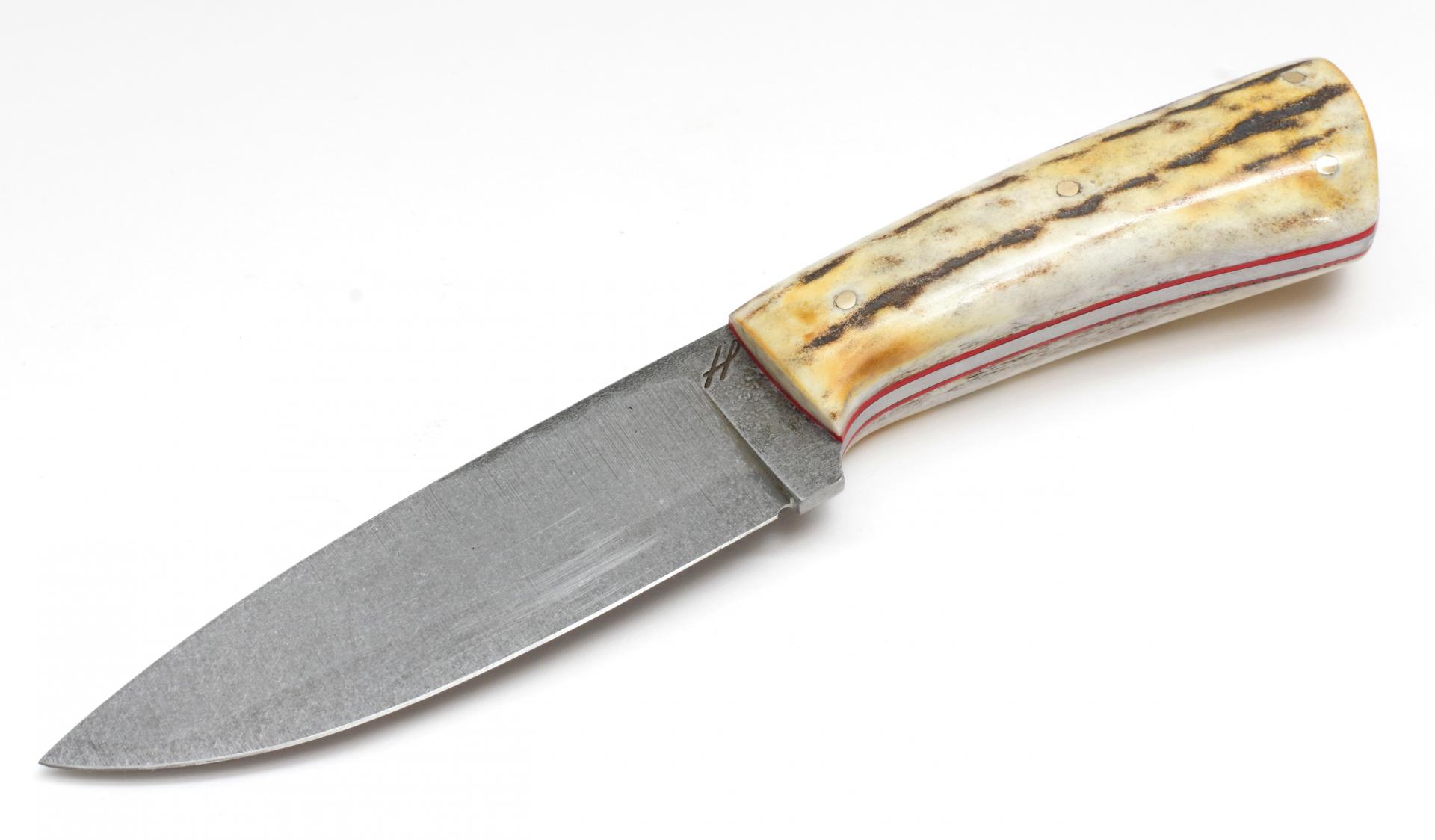 A fixed knife by Jean-Yves Drouard (JYKnives). The blade and tang are made of 90NCV8 and XC10
steel, the handle is deer antler with red liners. The knife measures 195 mm. 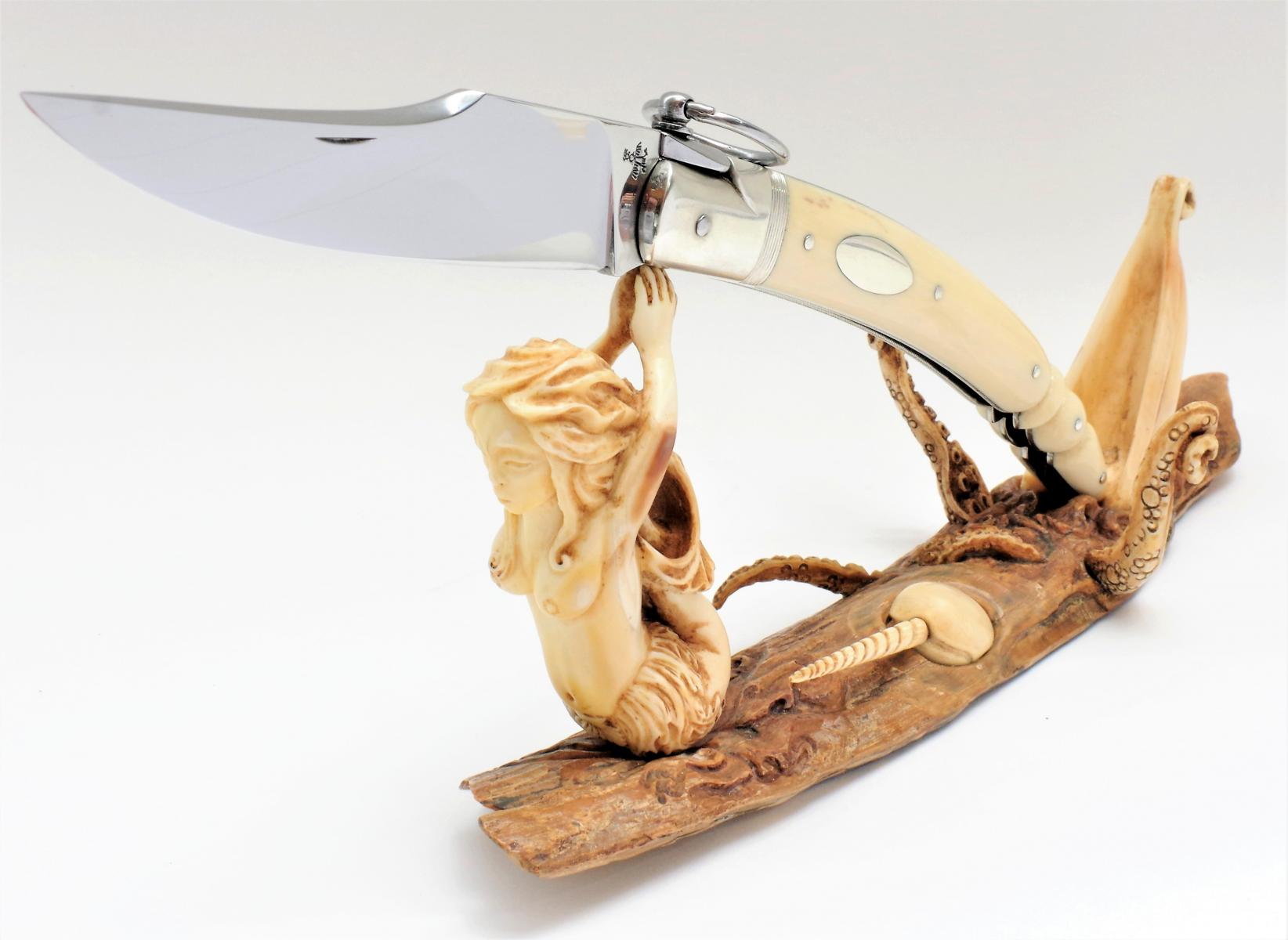 French artisan Alex Dubois made this ‘Mermaid’ presentation stand for a knife, carved from Mammoth
ivory and Warthog. 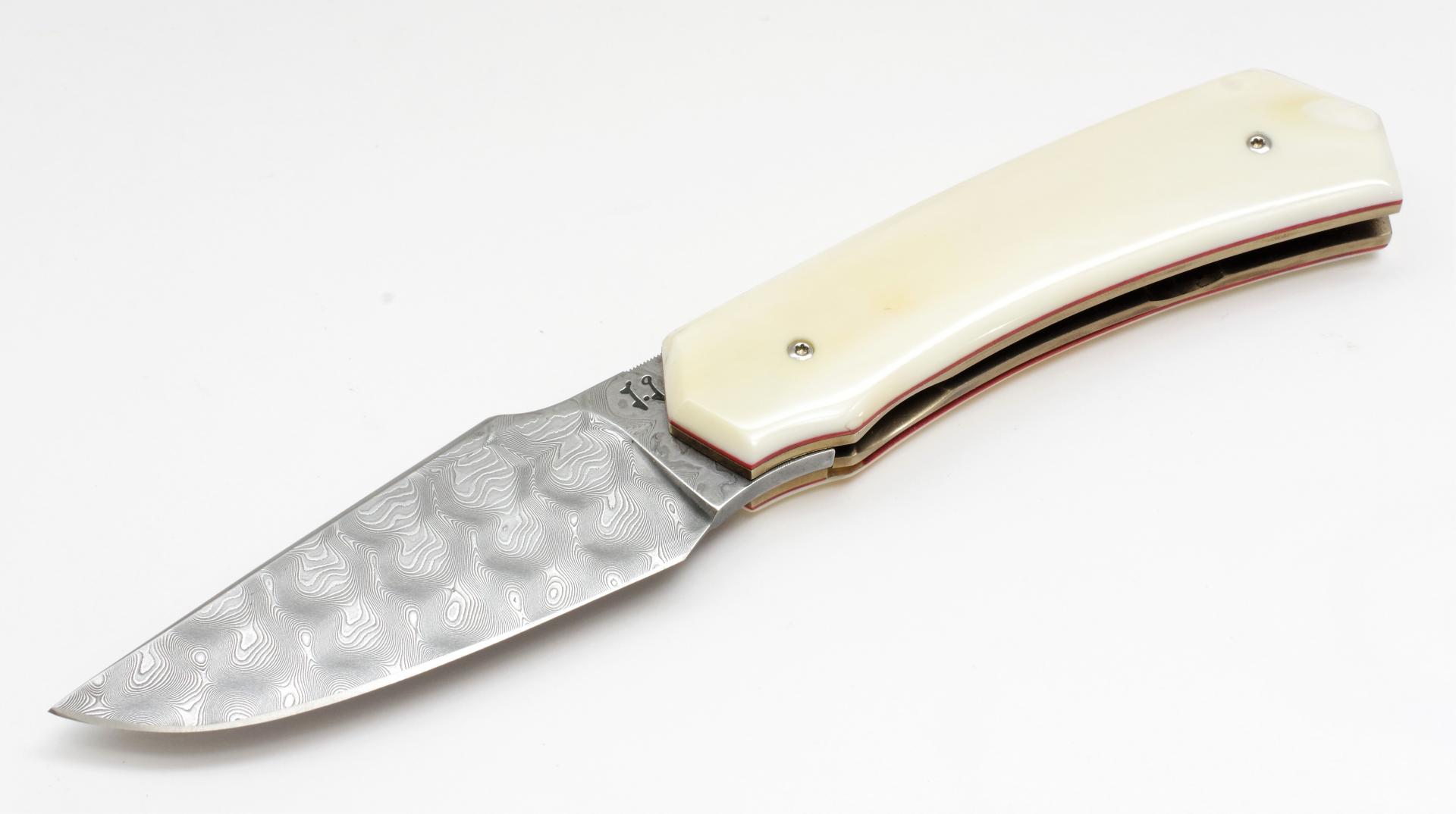 ‘Le Cat’ by French knife maker Joël Grandjean. The blade is Damascus steel and the handle is warthog
with Titanium liners. 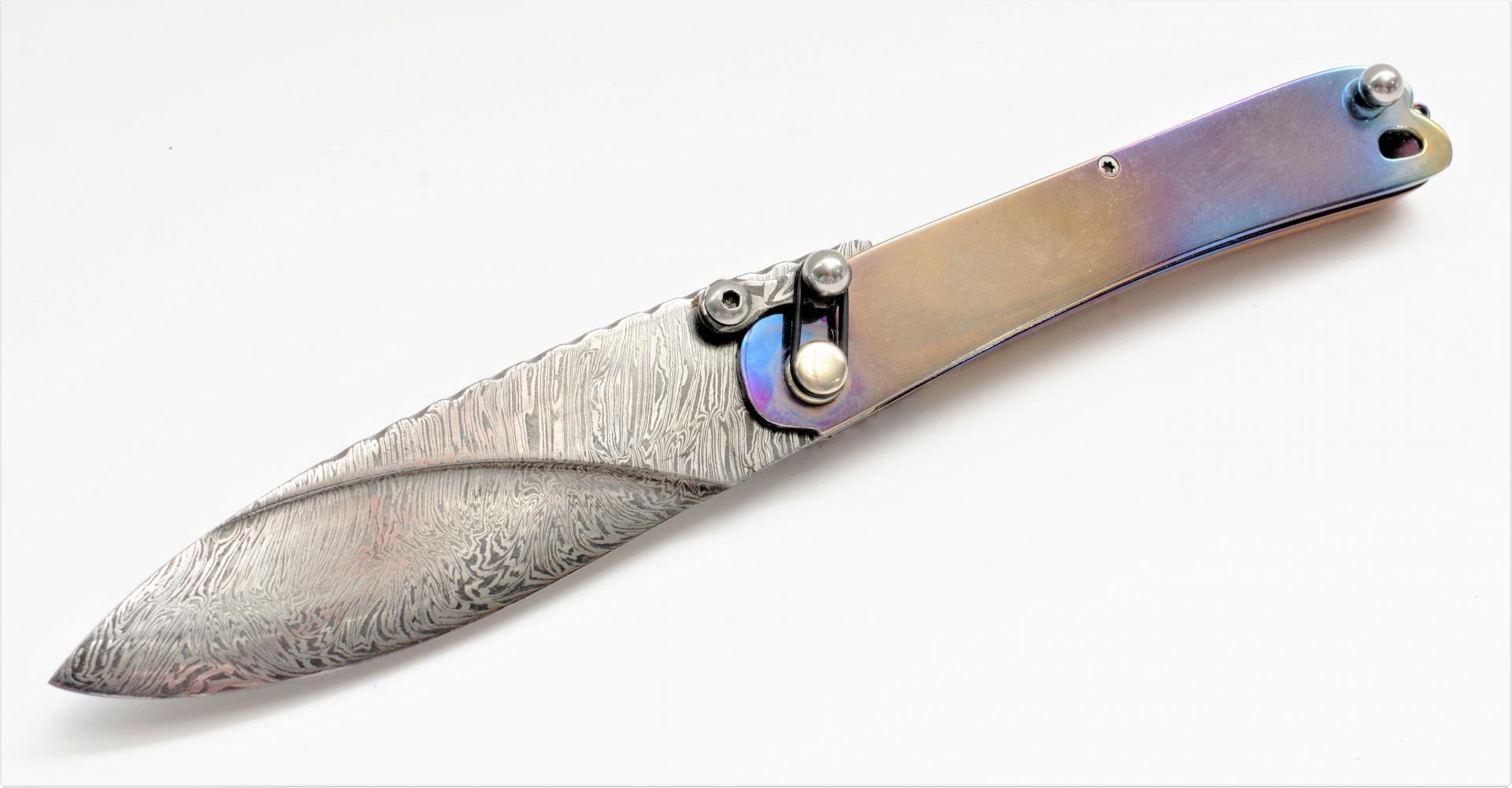 ‘Le Béglais’ by French knife make Jean-Louis Piérard. The blade is Explosion Damascus, the handle
materials are Titanium and Mammoth Ivory (on the opposite side). Most notable is the opening mechanism,
which has a rubber band connecting a lever on the side of the blade and the axis pin.

A folding knife by French maker Louis Blanchet Kapnist. The blade is Sandvik 14C28N, the handle is made
of stabilised Box-elder. 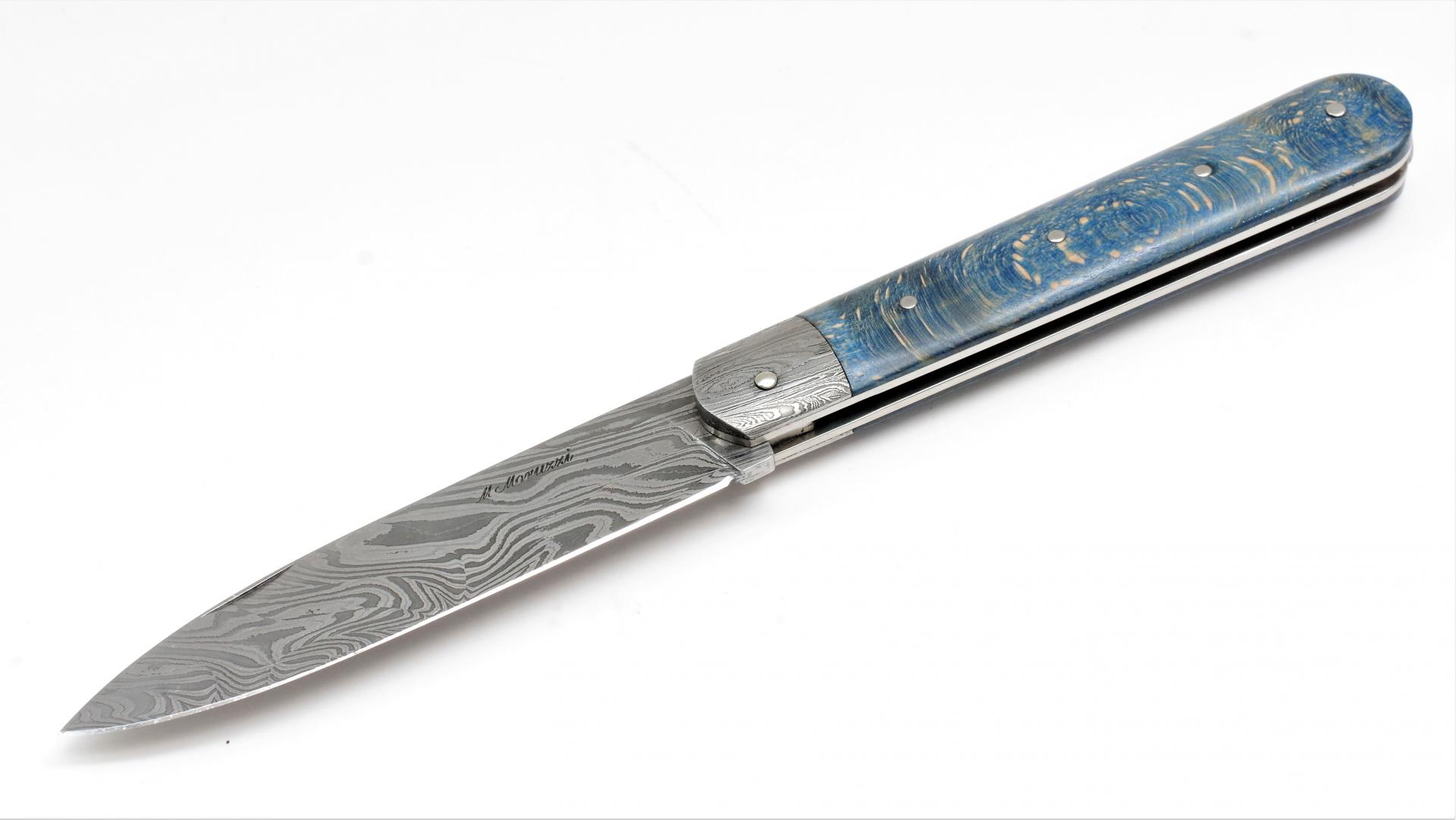 Luxembourg knife maker Marcello Moruzzi made this ‘Rouennais’. The knife has a blade of 1.2842 and 75Ni8 explosion Damascus. The handle material is dappled beech. 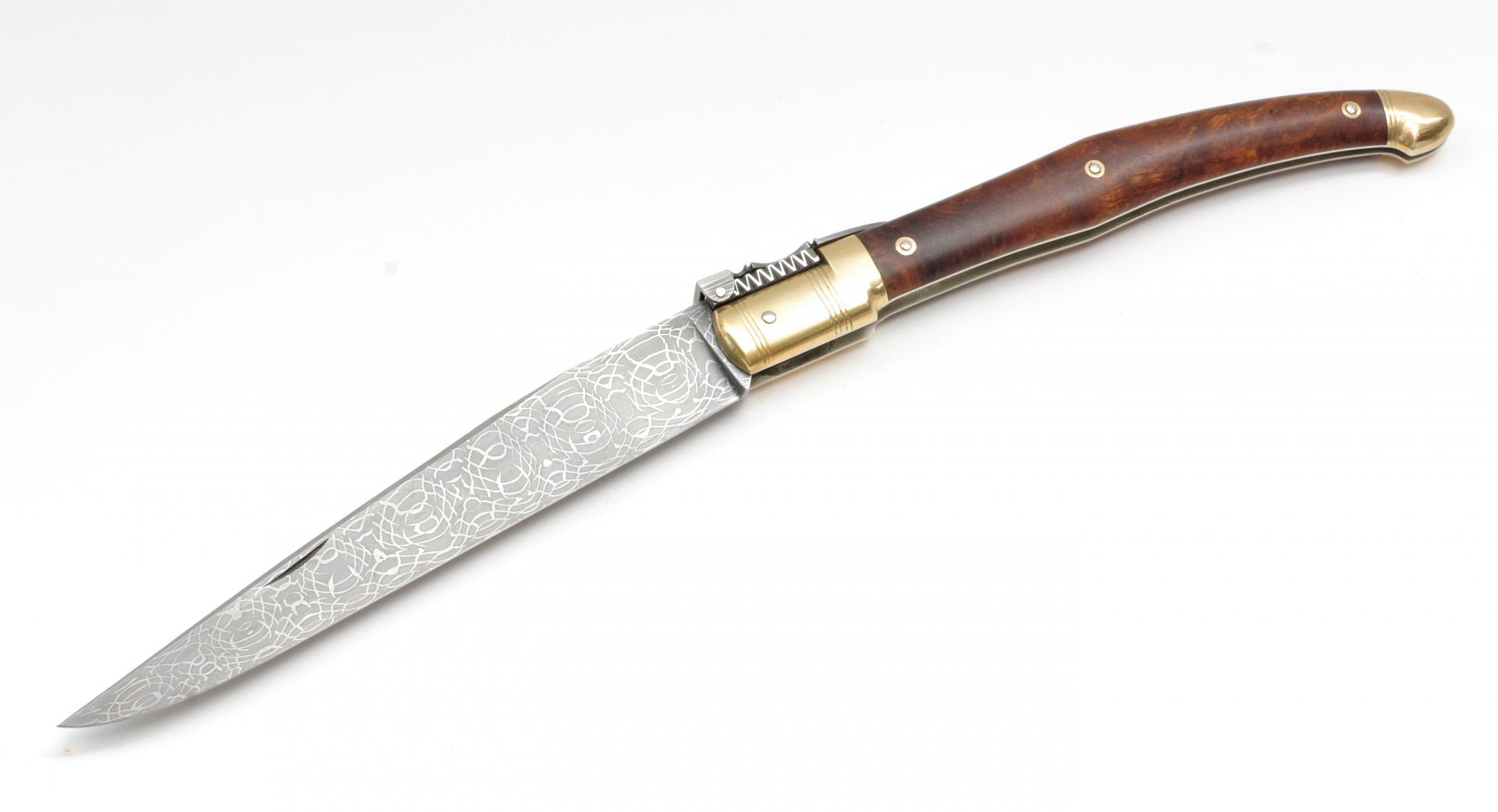 A folding knife by Mathieu Herrero. 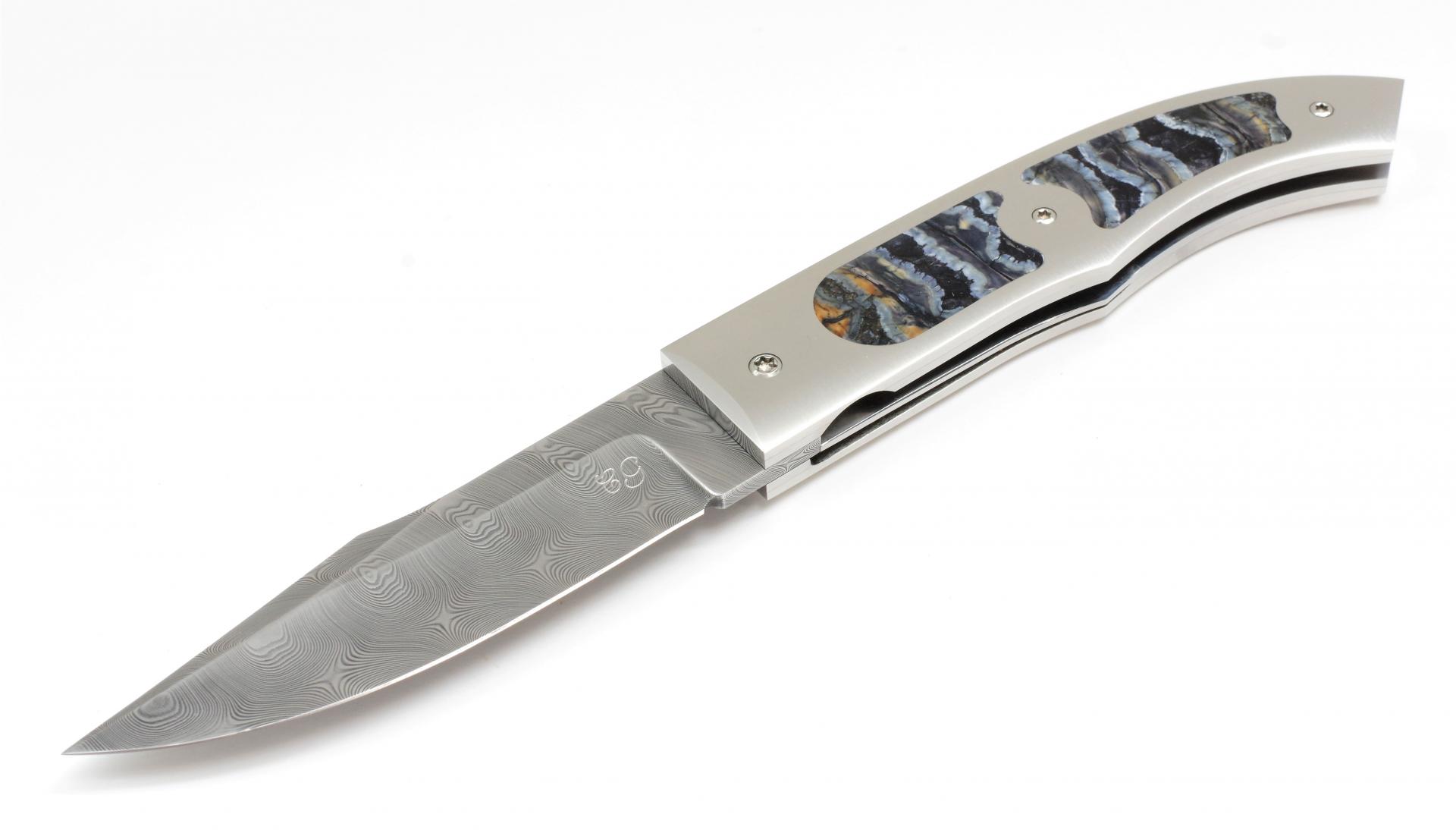 The linerlock ‘Gentleman folder’ by French knife maker Claude Giraud. The blade is inox twist Damascus.
The handle is made of Inox 316L, with inlays of Mammoth tooth.