The Coutellia in Thiers, France, is Europe’s largest knife show. This year’s 27th edition, on May 20 and 21, was bigger and livelier than ever, with more than 200 exhibitors and around 5,000 visitors. Many of these exhibitors are custom knife makers, but there are also knife companies, dealers in knife supplies and tools, and collectors. 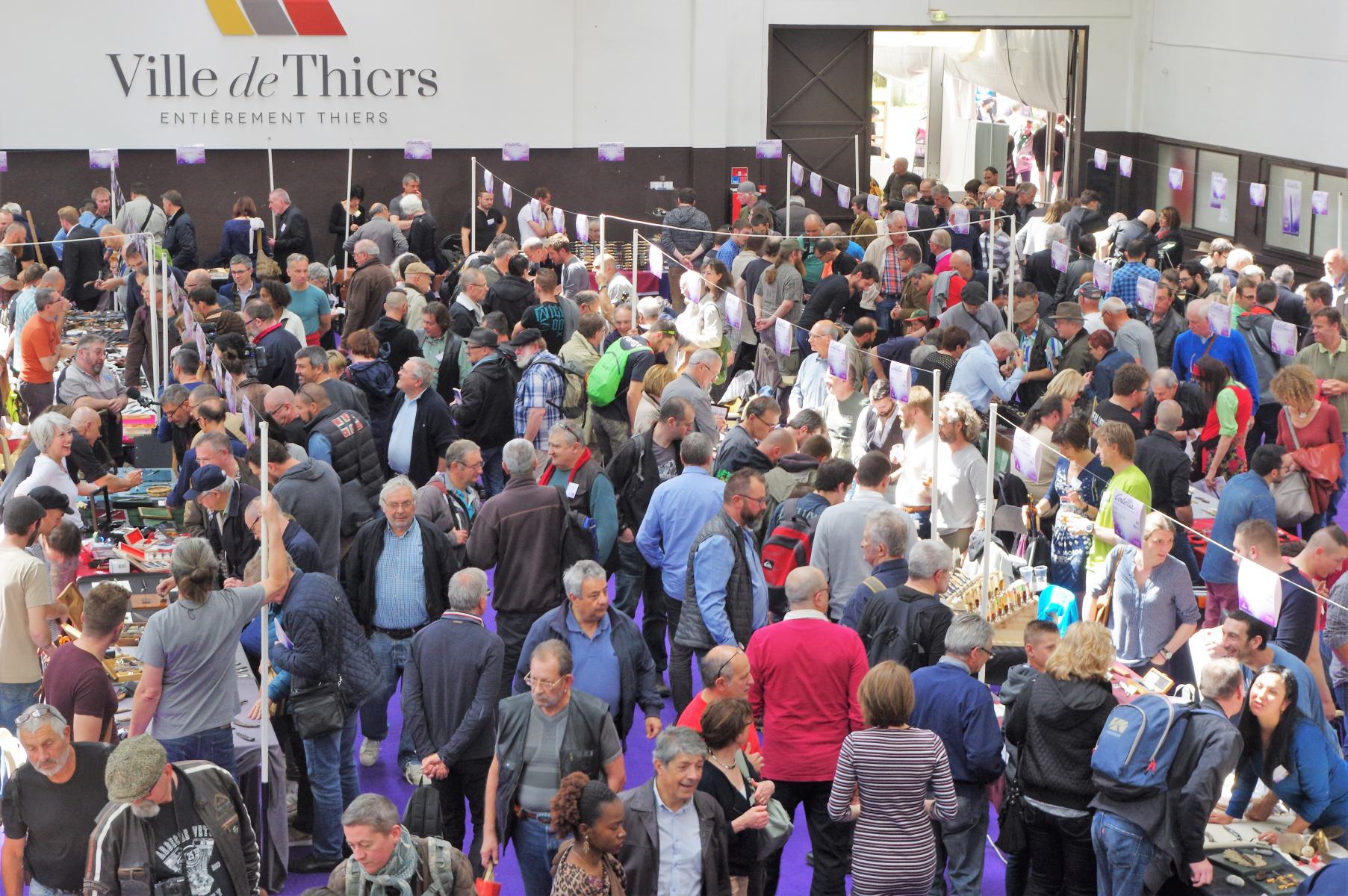 One of the knife makers’ halls of Coutellia. The 27th edition was the biggest ever, with more than
200 exhibitors and over 5000 visitors.
The Coutellia consists of a wide variety of activities. There are two halls with the major knife exhibitors, and a separate hall for the suppliers of knife making materials and equipment. There is the Village Coutelier (knife making village) with forgery demonstrations, and the adjacent terrain with smaller demonstrations and exhibitions, such as Le Petit Gourmet which demonstrated cutting techniques with kitchen knives - and had the visitors taste the results. One of the major attractions were ‘Les Rasophiles’, an international collector’s group of everything connected to shaving. Their stand, as usual, offered an impeccable shave or trim, with the donations going to a good cause. And of course, a show like the Coutellia just wouldn’t do without an exhibition of cork screws.
Apart from the Coutellia, there is the city of Thiers itself, which certainly merits a visit, if only for its wonderful medieval centre. The blade industry in Thiers is very much alive, and many of the 80 companies that make knives and cutlery open their doors to the public during the Coutellia, including the highly interesting Thiers knife museum. The Coutellia provides free transport to- and from the city centre during the show.
Next year’s date has already been set: May 19 and 20. But be warned: a two-day visit may not be enough. For more information see www.coutellia.fr. 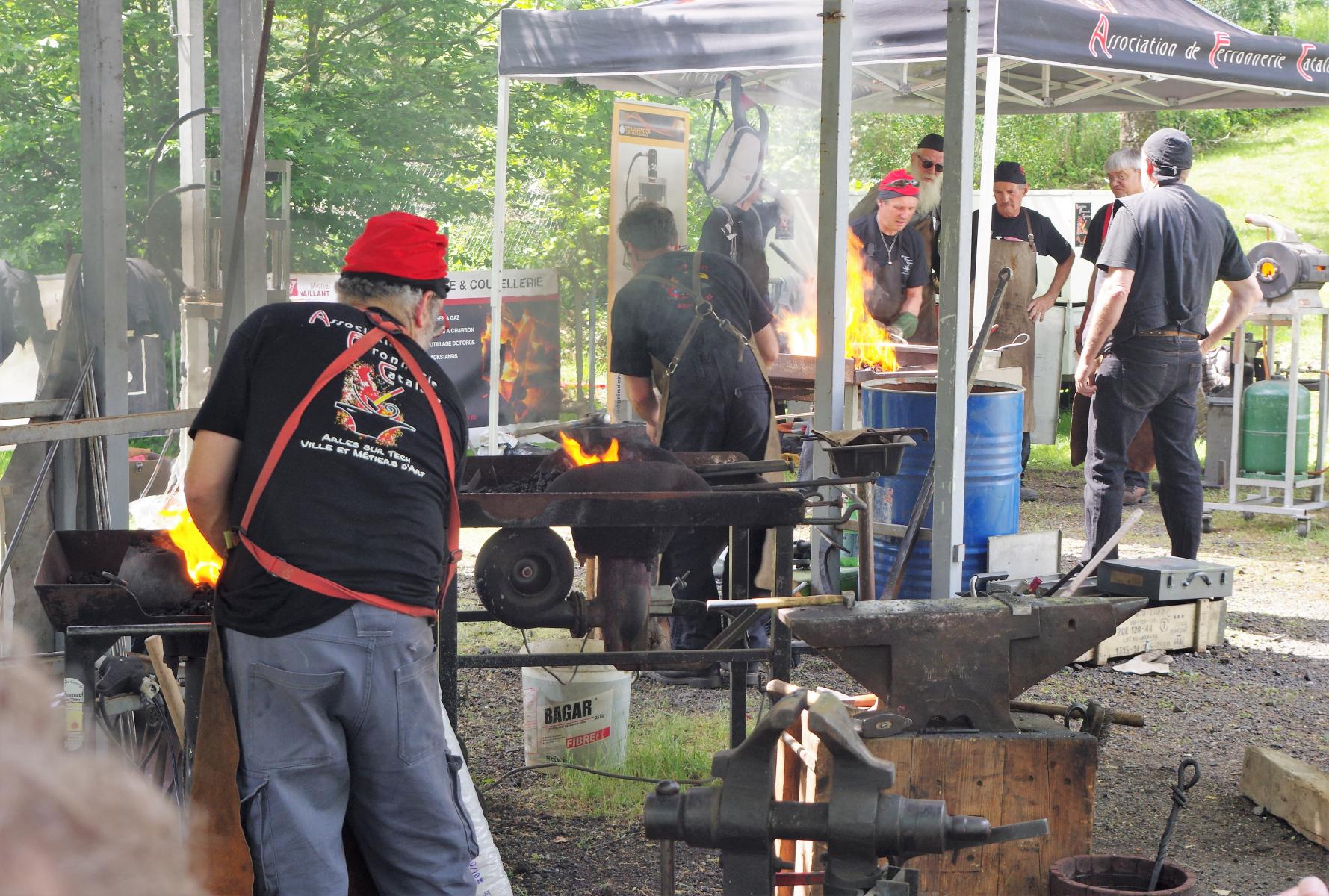 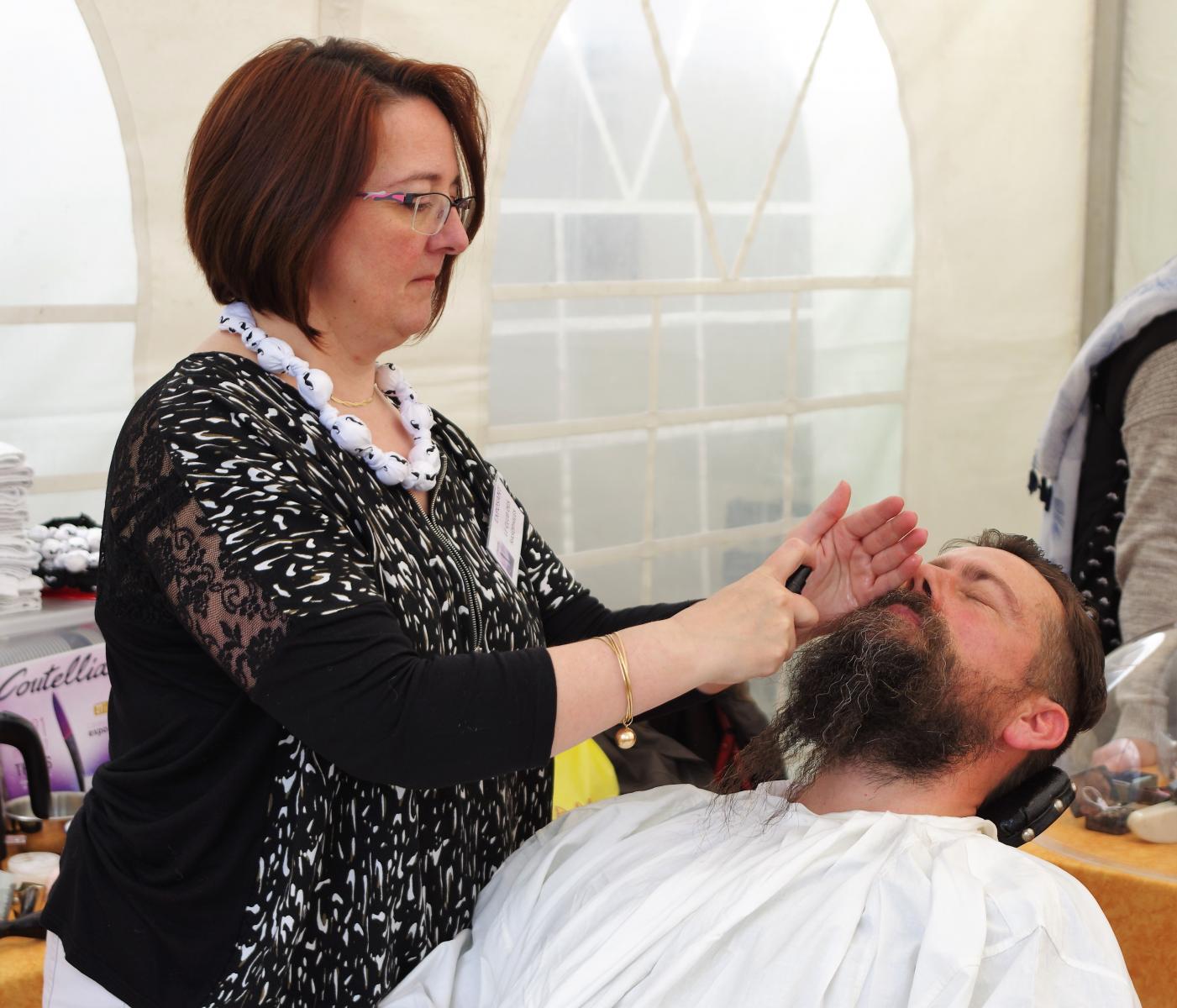 Left: The Village Coutelier (knife making village) is where all the forging takes place. Right: The stand of ‘Les Rasophiles’ offered the possibility for an impeccable shave or trim. 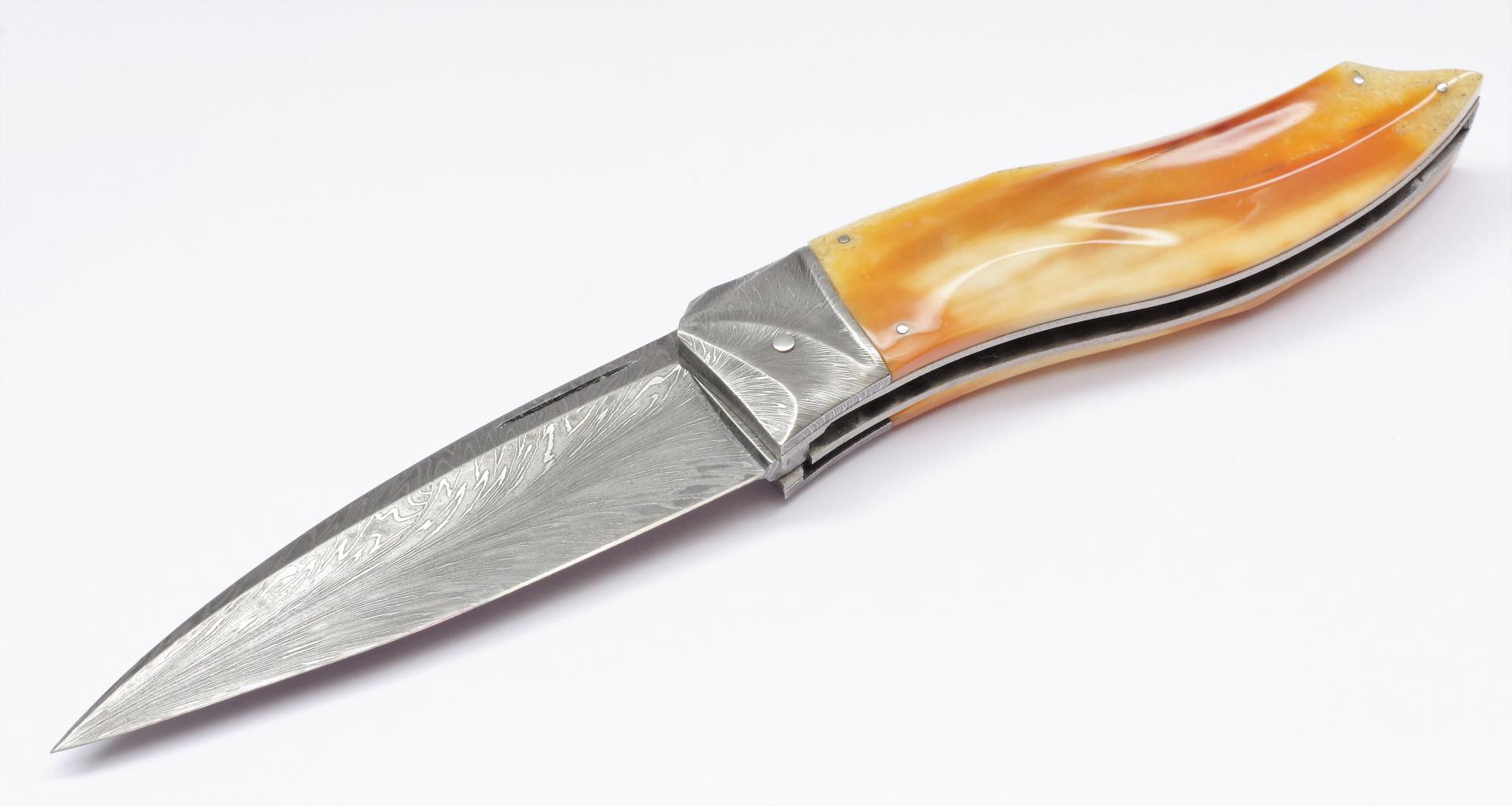 Alain and Joris Chomelier named this liner-lock folding knife ‘Memory from the North’. The blade is carbon
feather Damascus, the handle is a carved walrus ivory fossil. The knife is 19 cm long when opened. 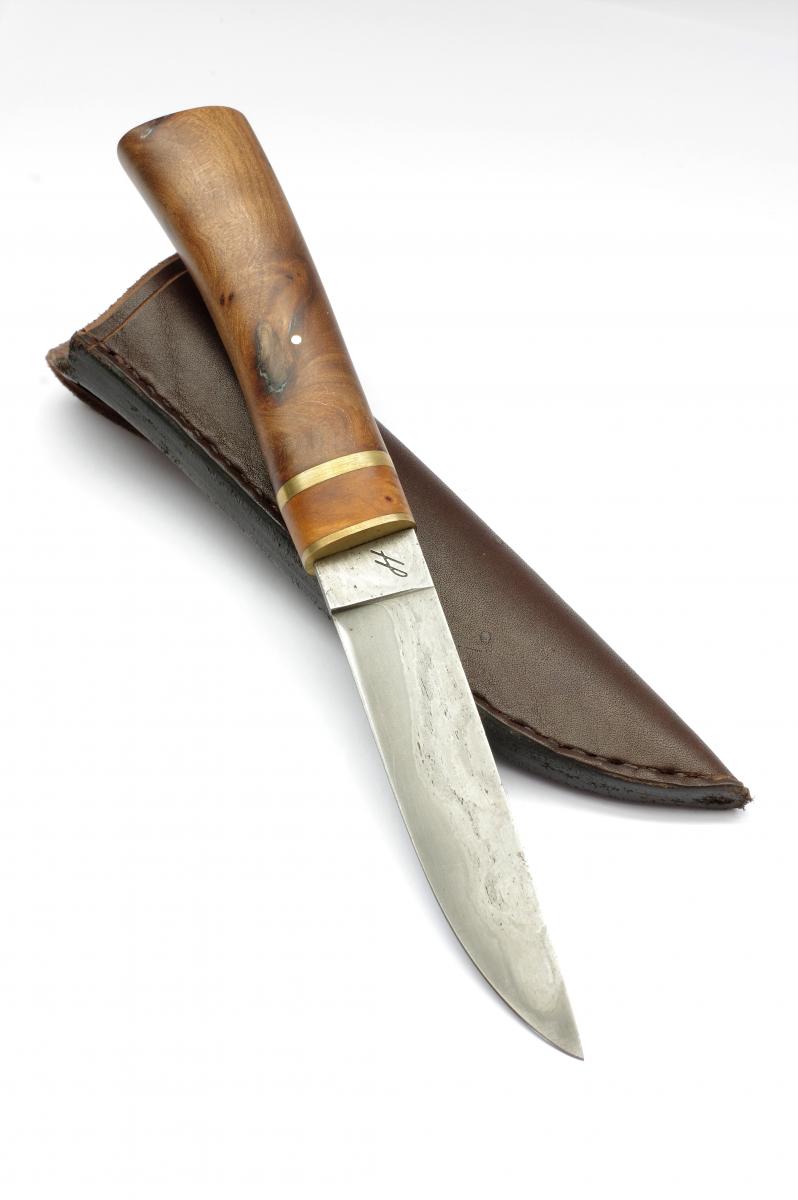 A Puuko by Jean-Yves Drouard. The blade is a combination of 90MCV8 and old iron,
the handle is made of elm burr. 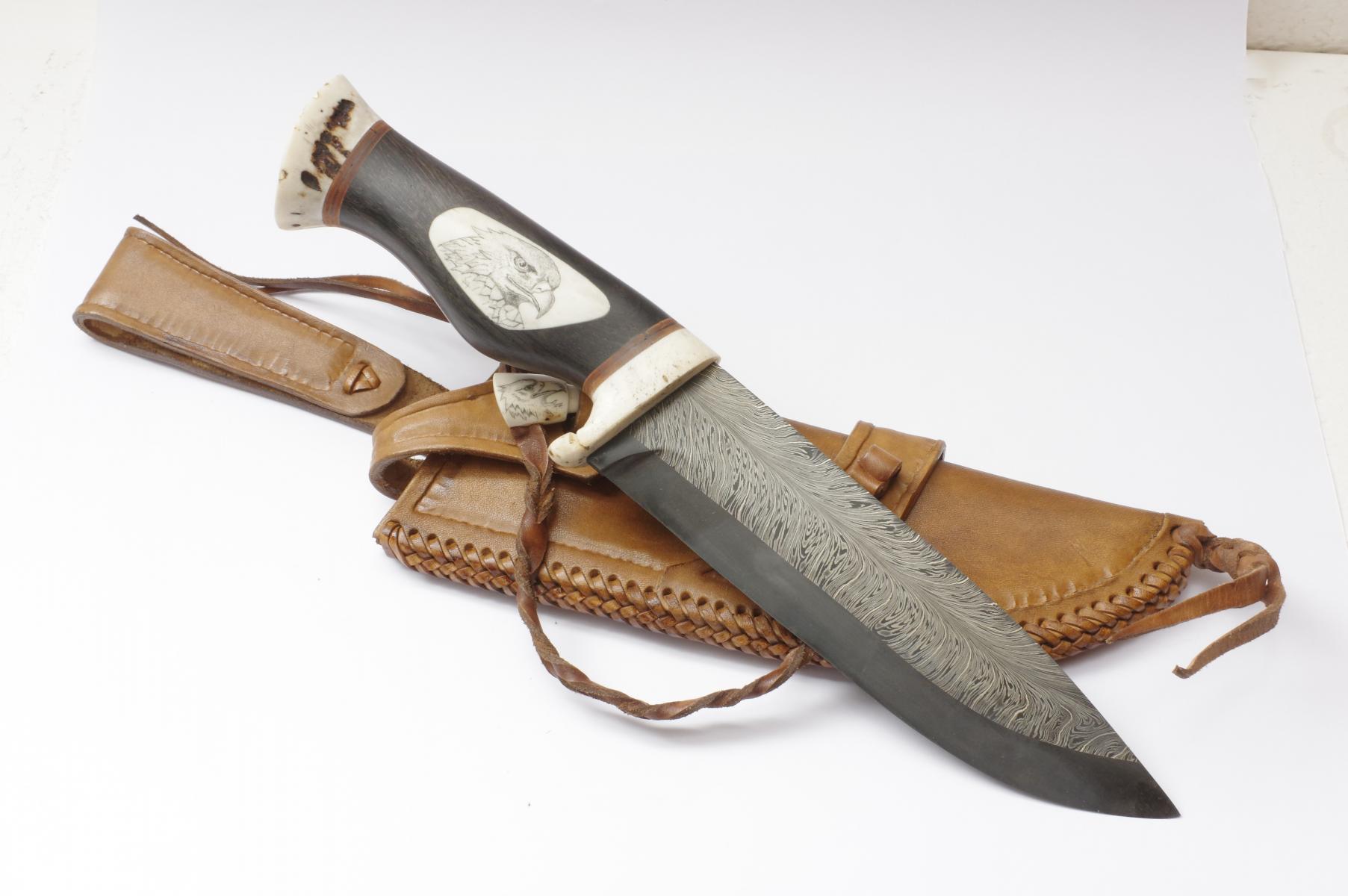 Hervé Manoury named his knife ‘L’Aigle Noir’ (the black eagle). The blade is 892 layers of explosion
feather Damascus (90MCV8, 15N20 and pure nickel). The pommel and guard are stag, and the handle
is made of bog oak with a stag insert with scrimshaw artwork. This knife won the public prize at Les Métiers
d’Art de la Coutellerie in Masgot, in April this year. 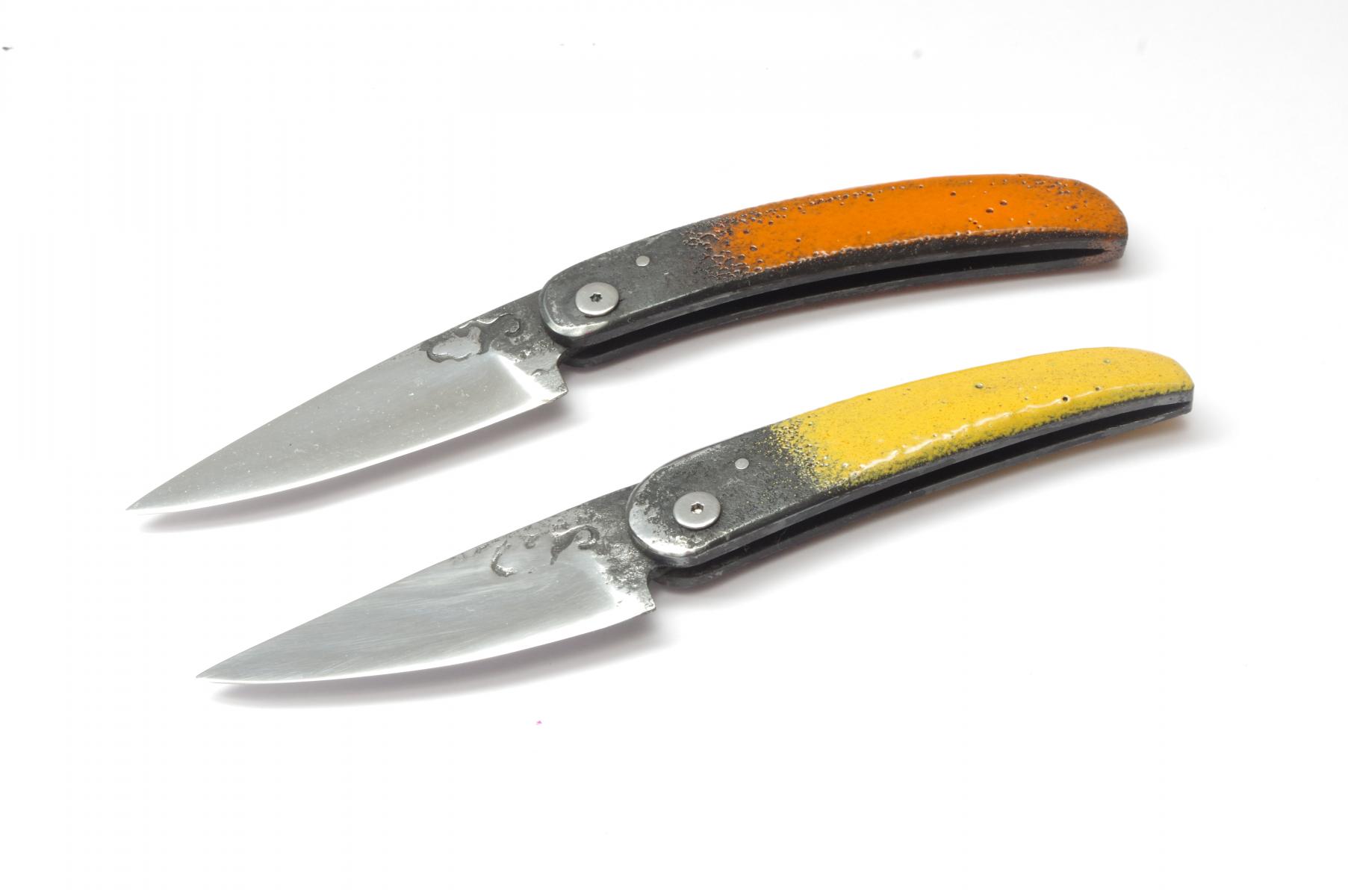 Gérald Bauché, ‘Arfèvre’, made these lovely folding knives, called Magma. They are made of
Inox 440A steel, which is partly enamelled. 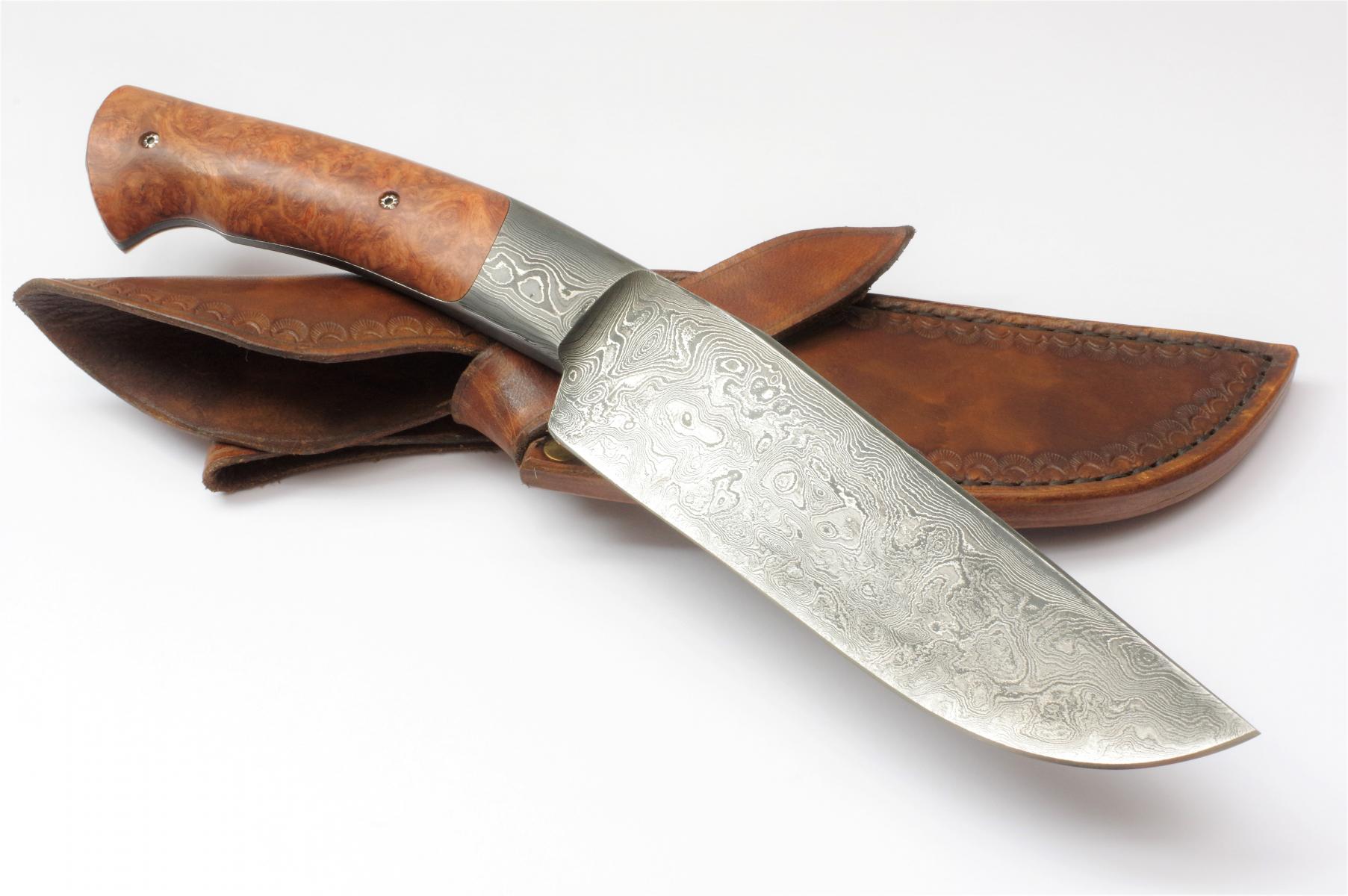 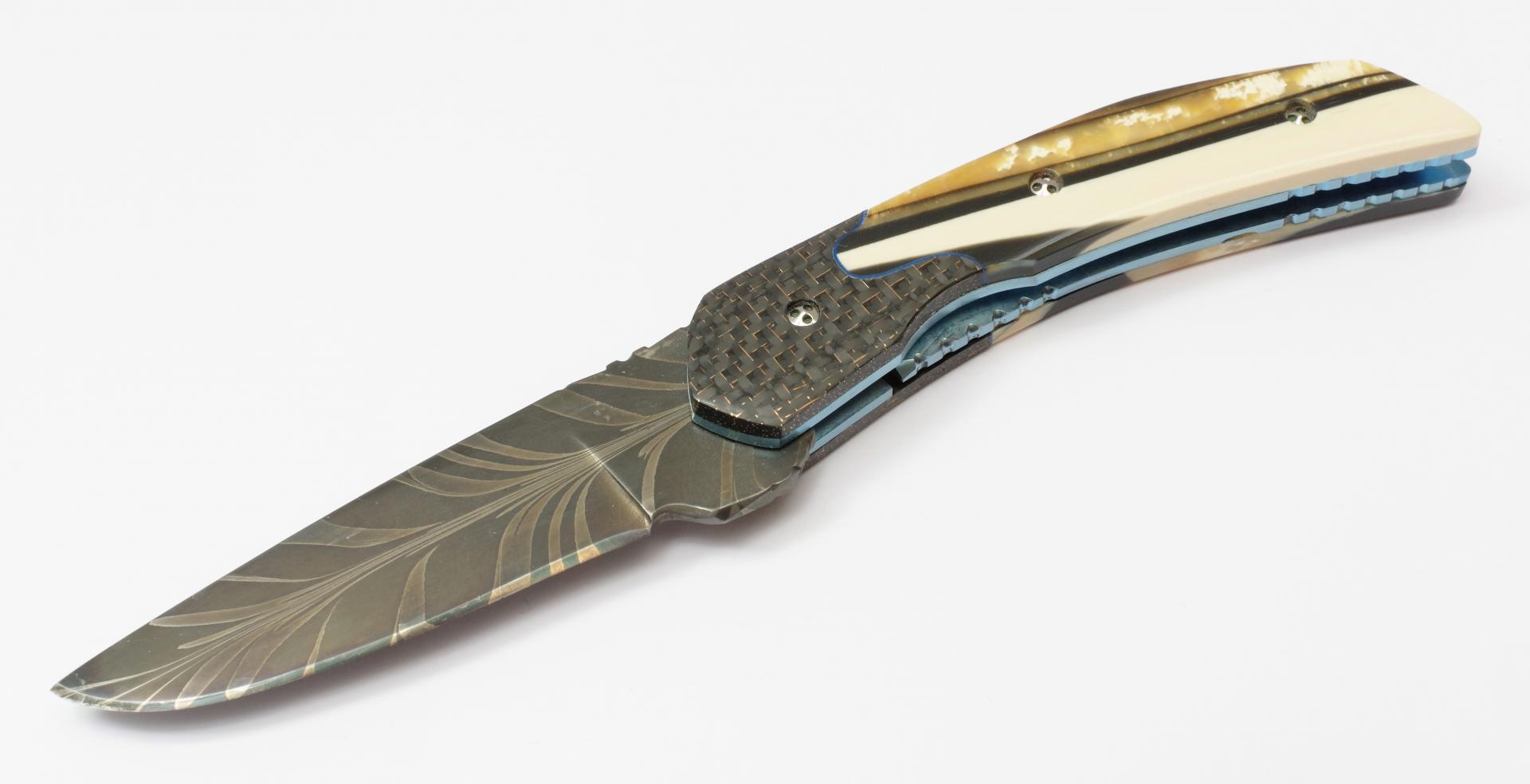 ‘Le Petit Loup’ (the little wolf) by Michel Delanghe. The blade is made of carbon Damascus, the handle
materials are mammoth, titanium and lightning carbon fibre. 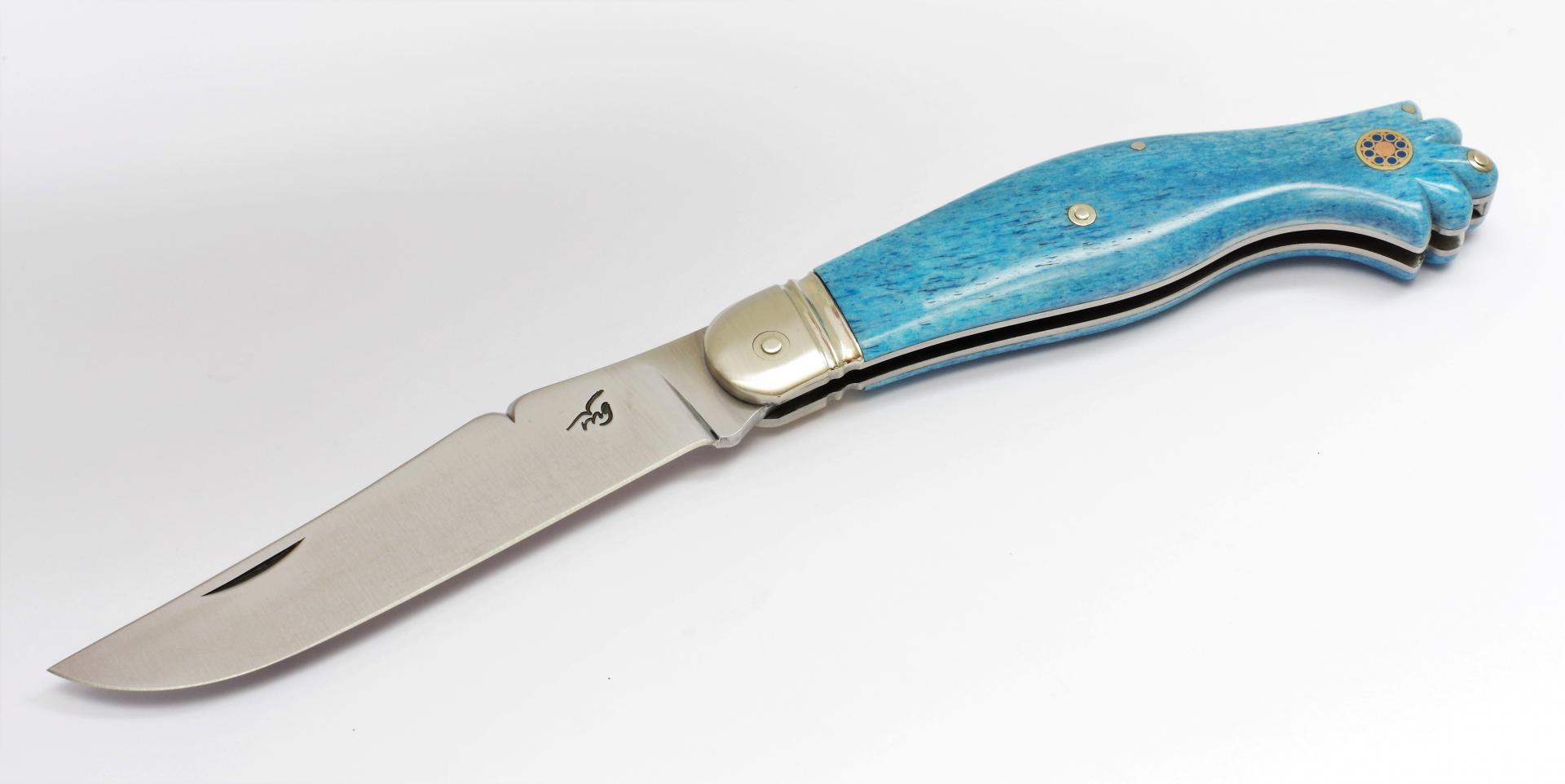 This knife by the Swiss knife maker Mike Graf is appropriately named: ‘Le Bleu’ (The Blue).  The handle
is made of blue stained bone, the blade is RWL34 with Berlin silver bolsters. 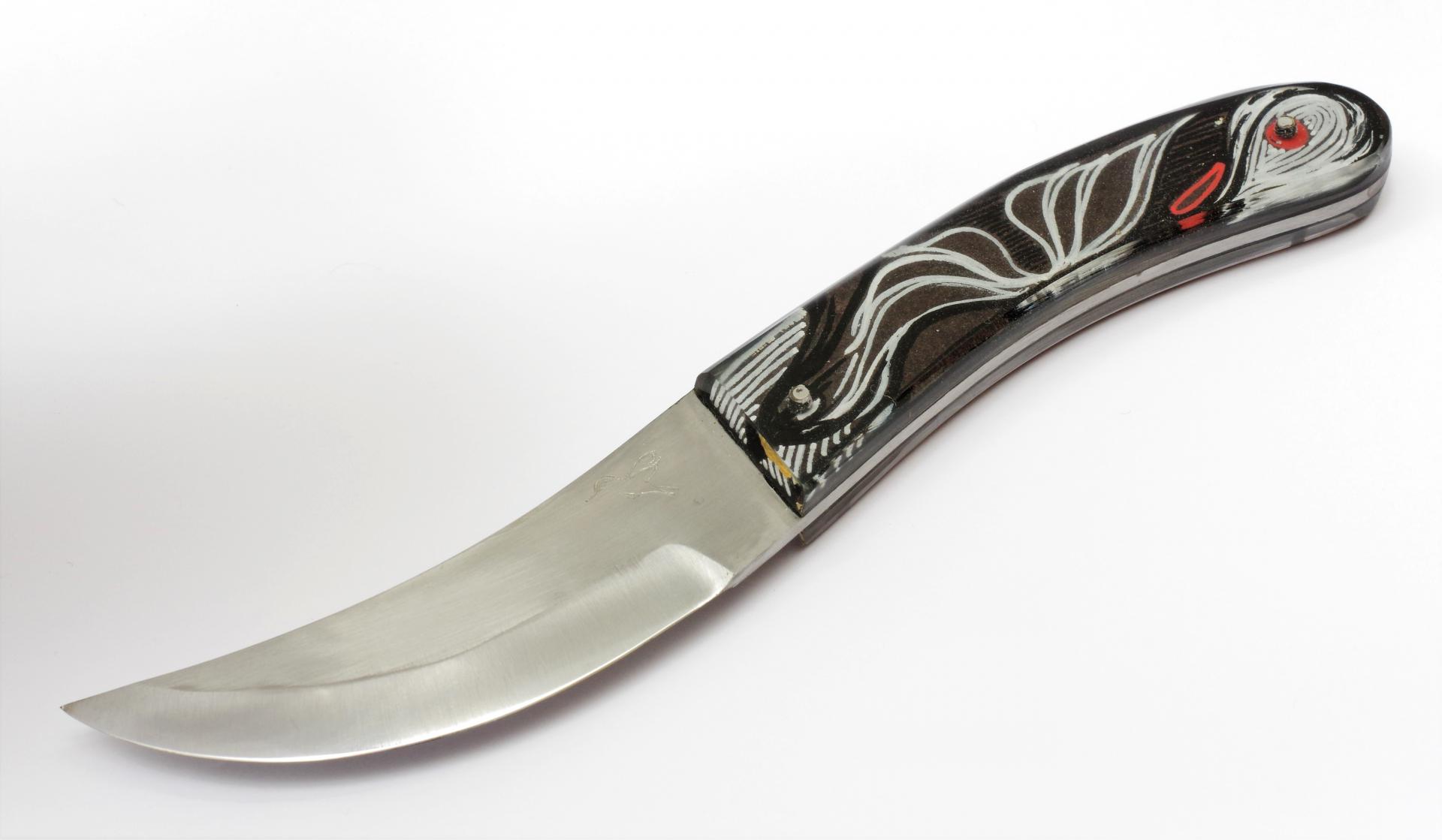 Gabrielle Kergrohe-Masson makes knives, does engravings and scrimshaw. This is her ‘Jeu de l’Oie’
(Game of Goose). The drawing is from Gabrielle, covered with bright resin. The blade is Inox and the length of the knife is 20 cm. 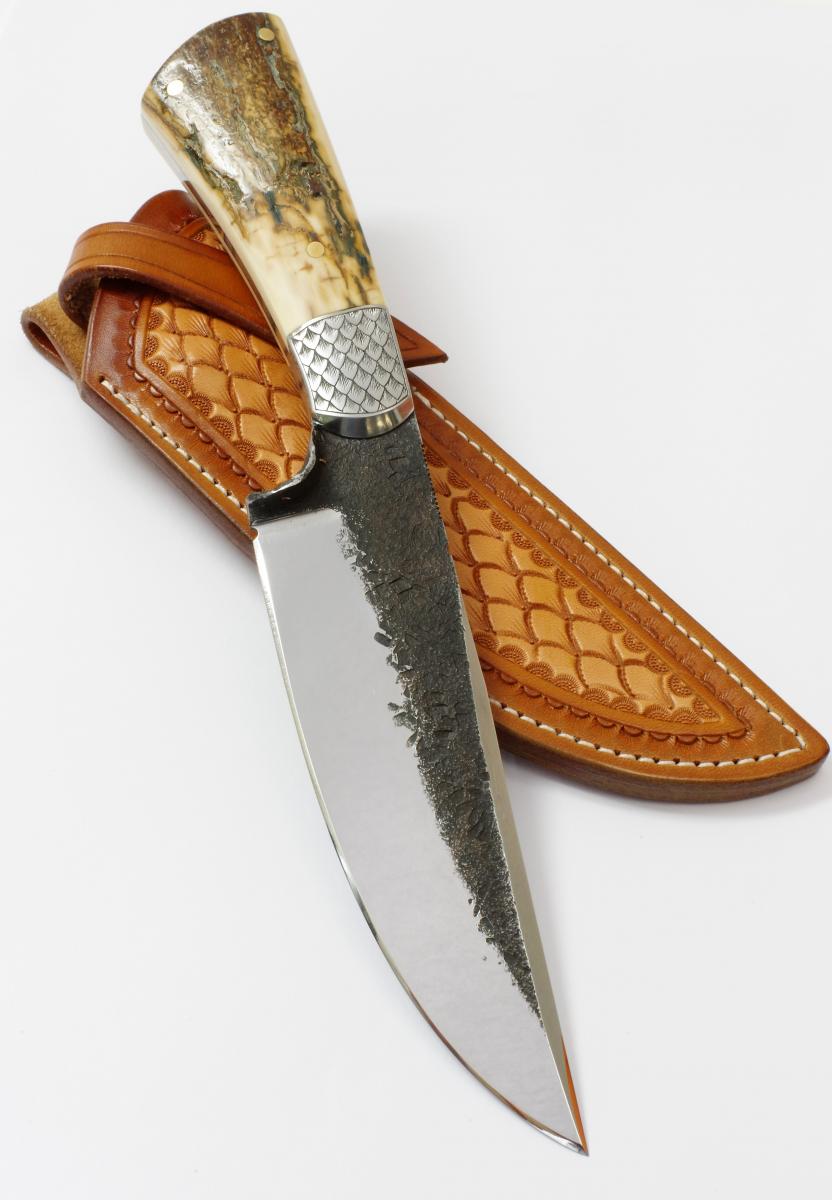 Pieter Annandale calls this knife the Front Roller. Blade and bolster are made of Damascus by
Ettore Gianferrari. The handle is made of warthog and must be scrimshawed. 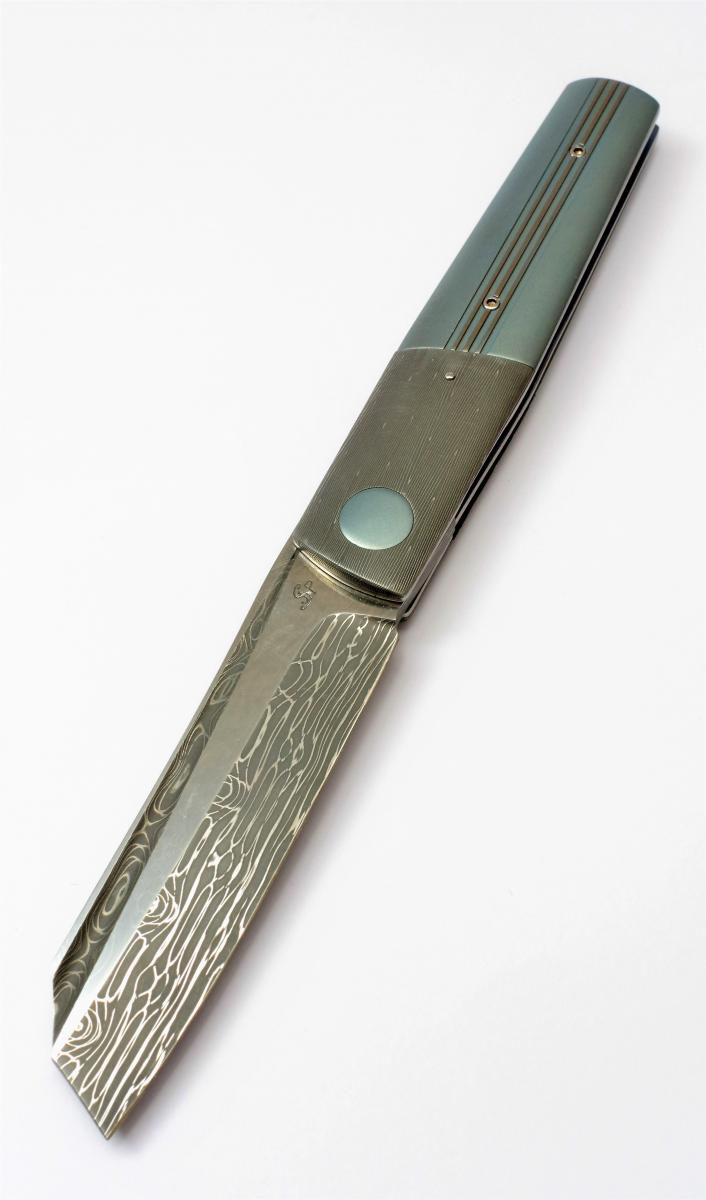 The ‘Mushin’, a liner-lock folding knife by Jean-Pierre Sucheras.
The blade is made of Damascus by Devin Thomas. The handle is
ice blue titanium.

The ‘Bad guy’ by Franck Souville. The blade is RWL, the handle is made of vintage micarta.
The engraving is by Elisabeth Da Justa. 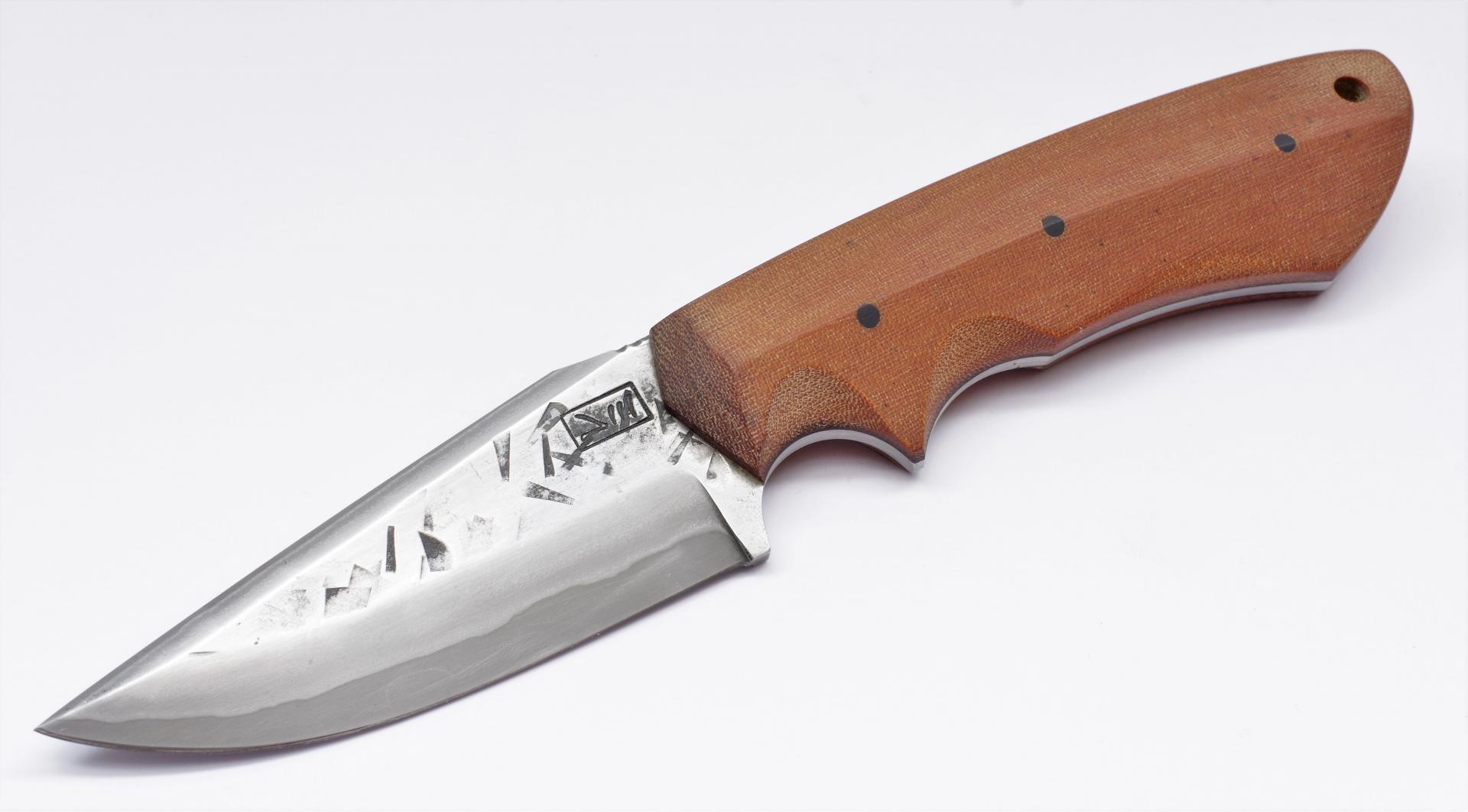 The Keela-B by Remy B. The blade is O2 San Mai, the handle is vintage micarta with patina.
The knife comes with a Kydex sheath. 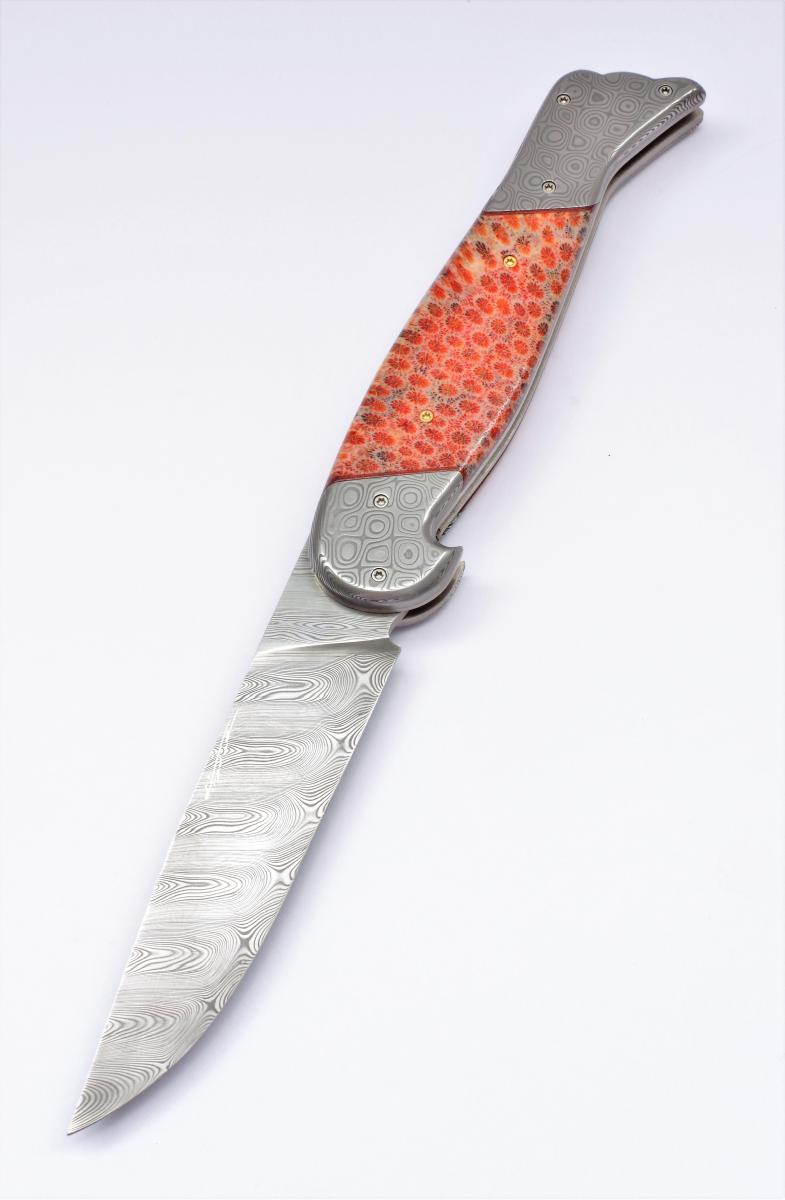 The Red Falcon, a liner-lock folding knife by Daniel Schweig.The
blade is Damasteel, the handle is made of fossil coral.The opened
length is 21 cm. 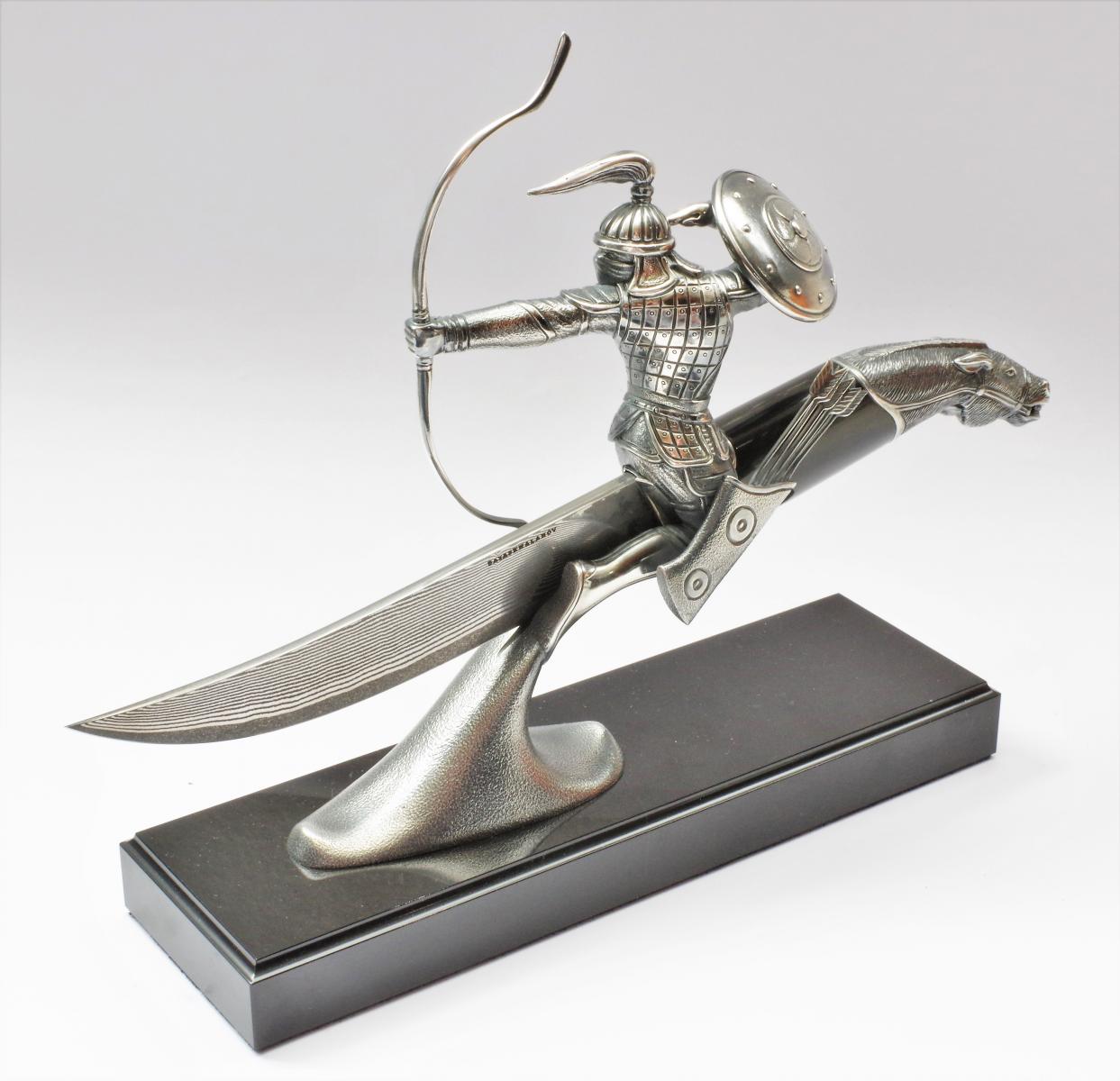 Zhigzhit Bayaskhalanov from St. Petersburg makes jewellery and art knives. This Mongolian horseman
is an excellent example of the wonderful creativity in his work. 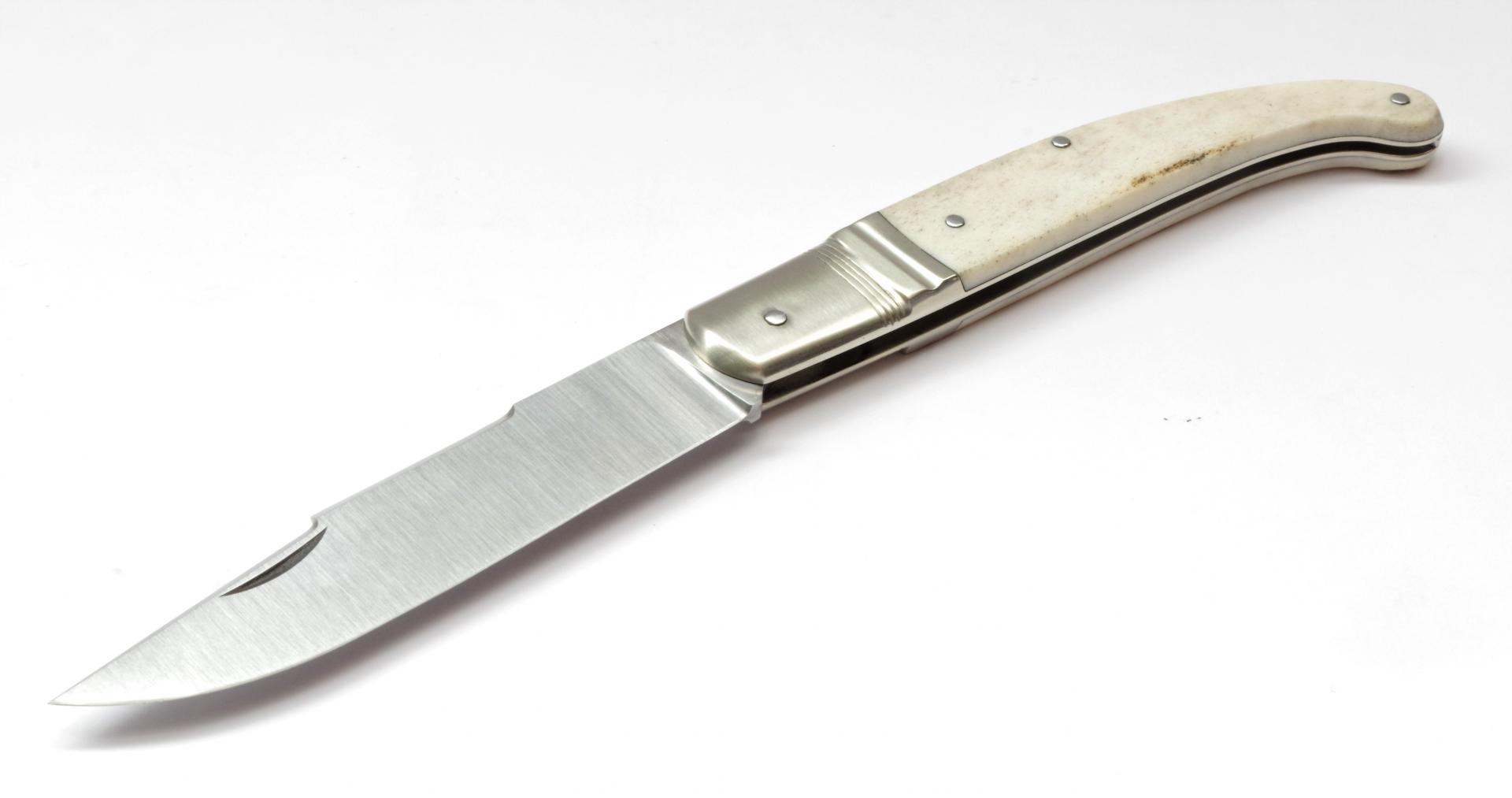 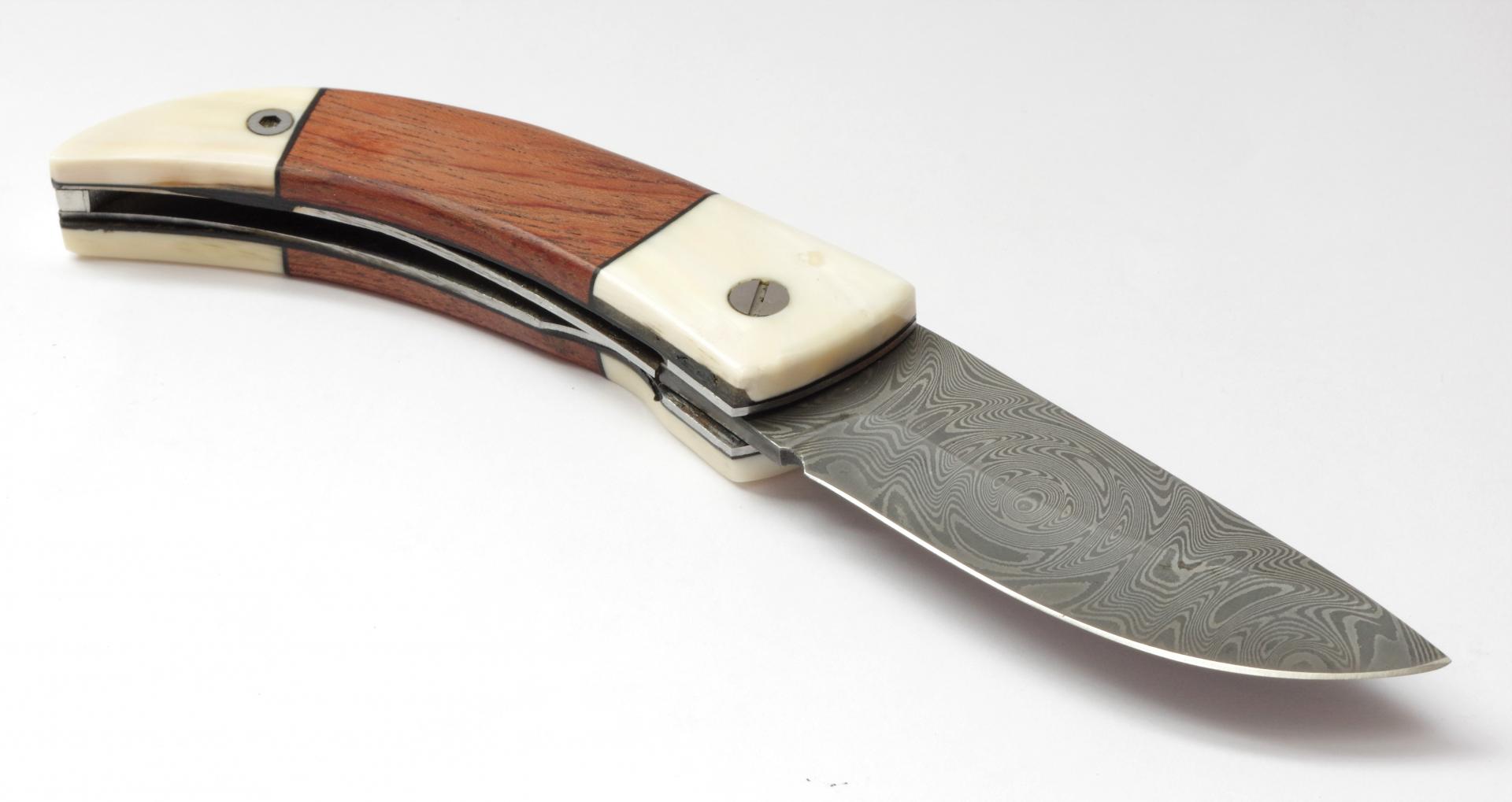 Alexandre Musso made this liner lock folding knife with a blade of Damascus. The handle materials
are warthog and rosewood. 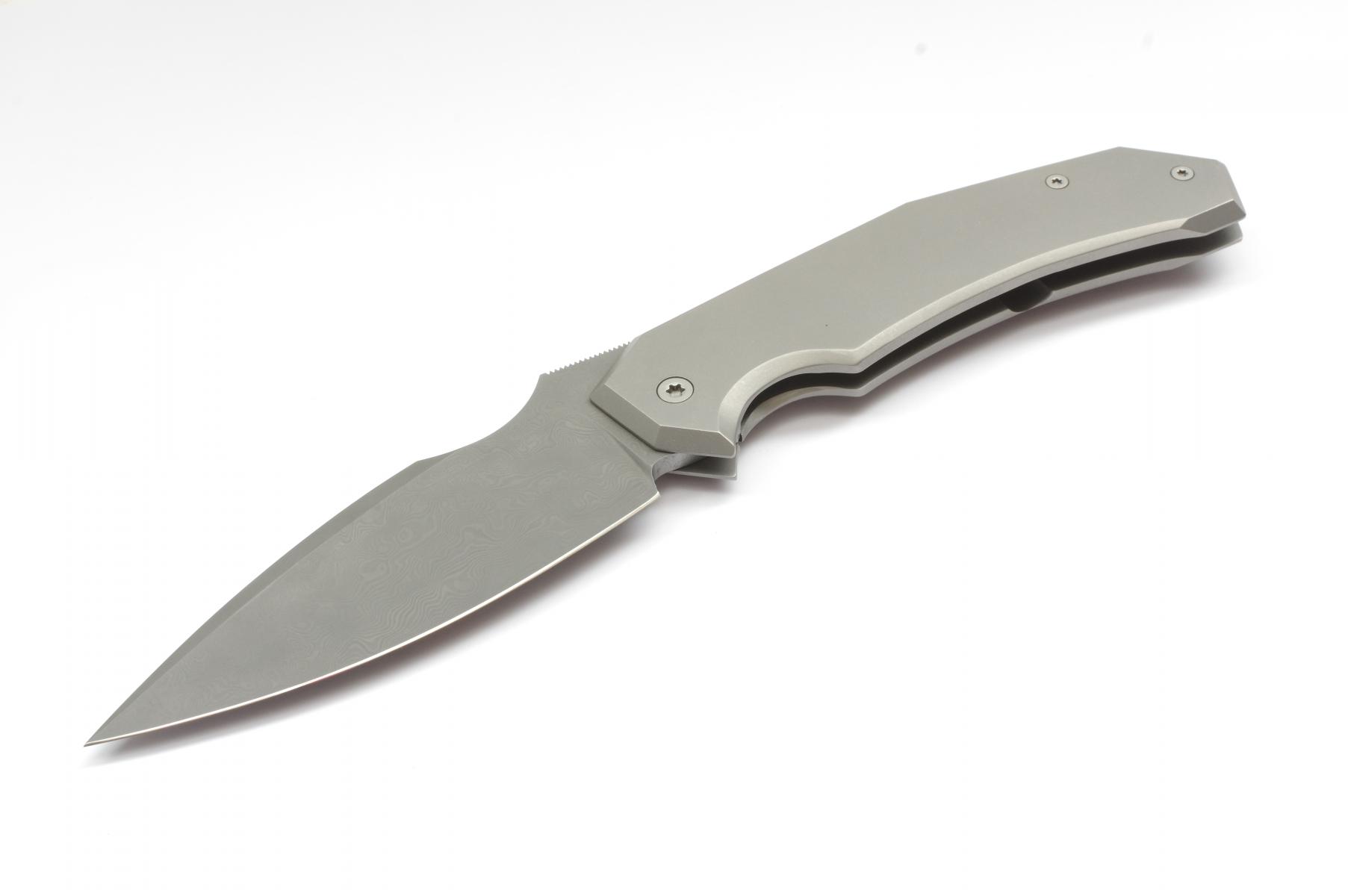 Thomas Gony (Grind Tactical Knives) made this Speartac framelock knife. The blade is Zladinox, the handle
is made of titanium with a Zladinox pocket clip. When opened, the knife is 20.8 cm long.

‘L’Aurillac’ by Romain Alvarez. The folding knife has a blade of RWL34, and the handle is made of
warthog and 24Cr13 steel. The length of the opened knife is 200 mm. 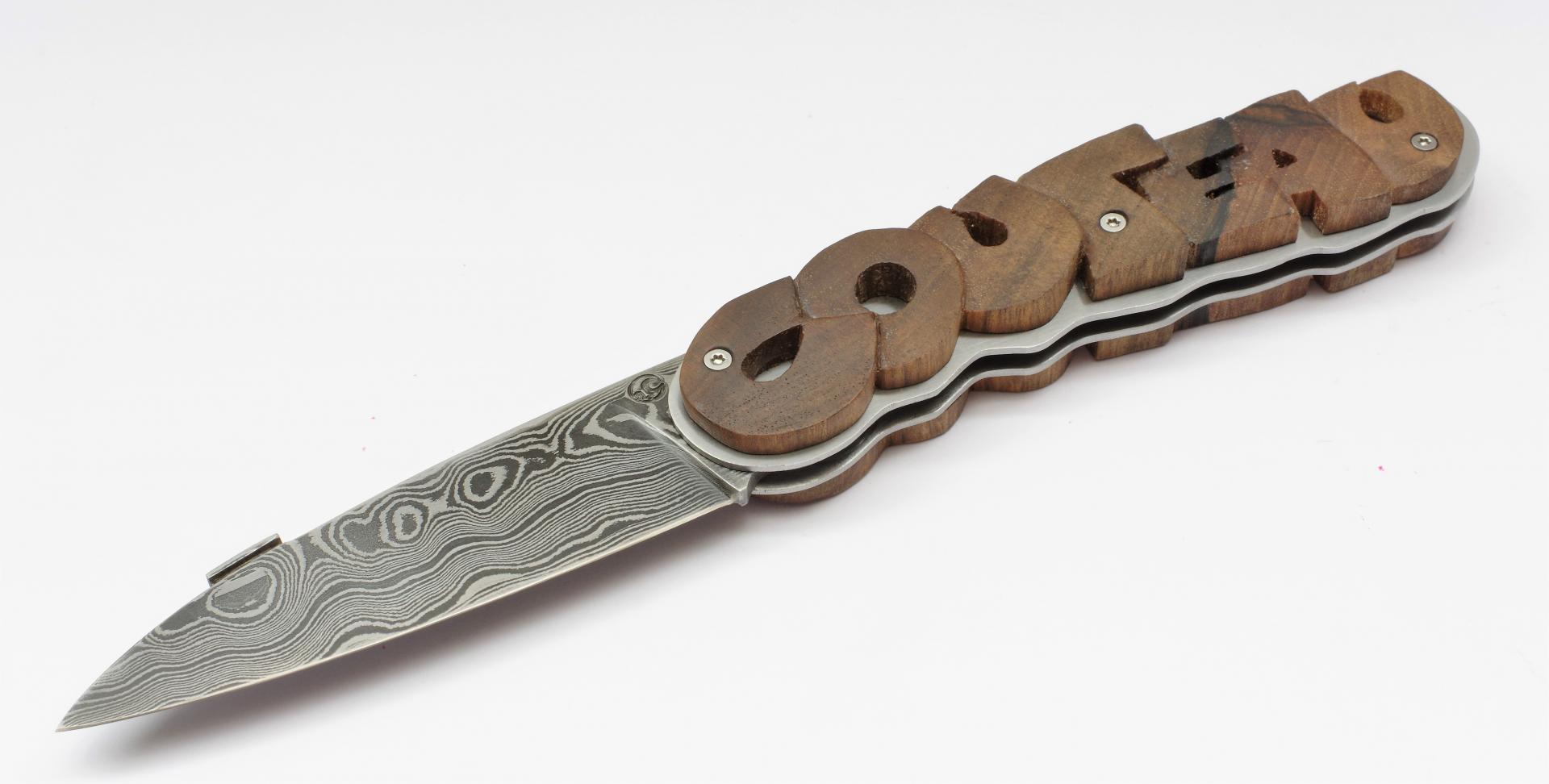 Louis Blanchet Kapnist likes to make knives with a slight wink.
This one is called ‘Le Couteau’ (The Knife) – who could have guessed? The blade is homemade 90MCV8
and 15N20 Damascus, the handle is sculpted walnut. This knife won the public price at the Coutellia. 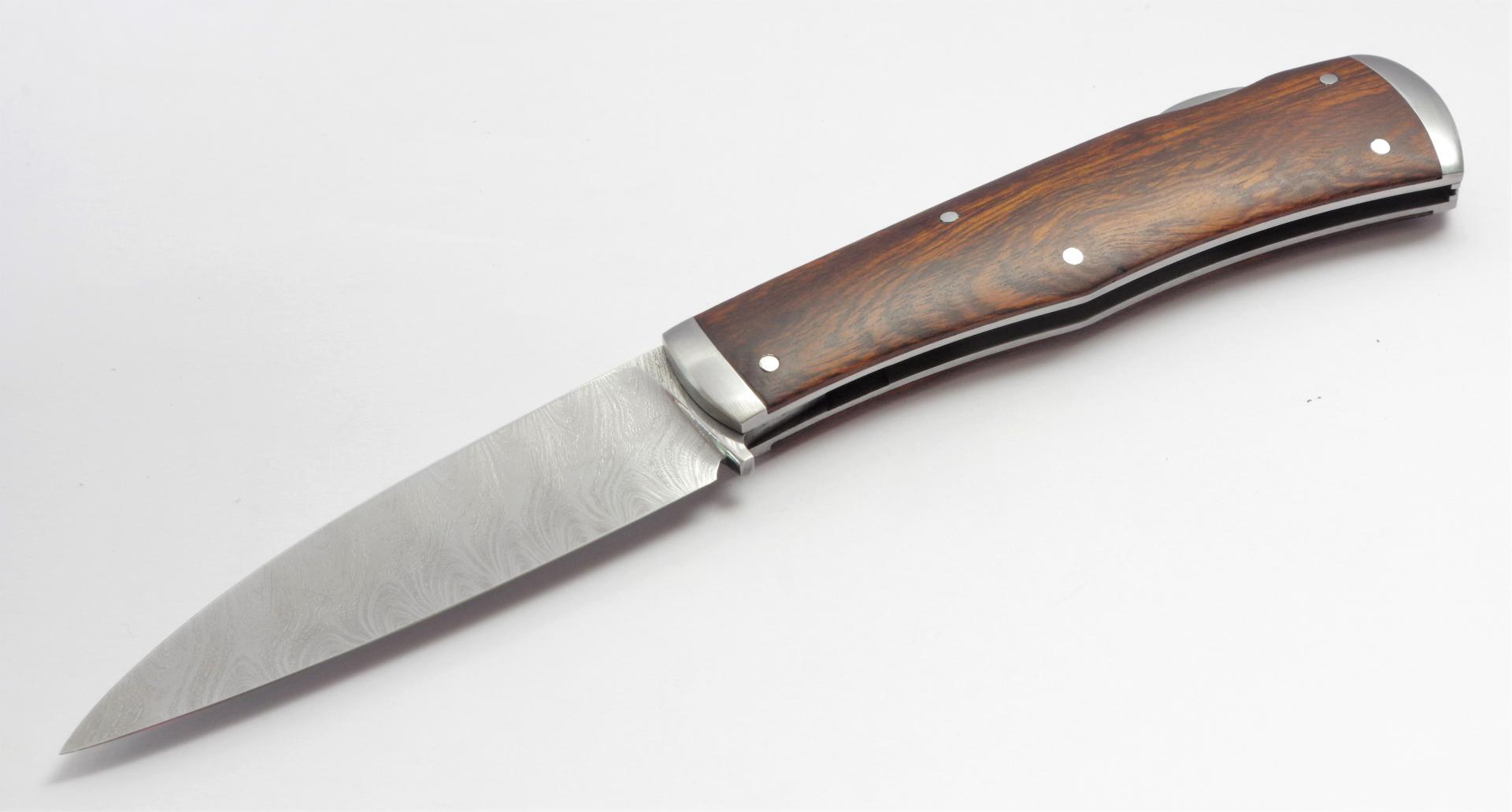 Jean-Baptiste Lévêque made this elegant lock back folding knife, the ‘Centofante like’. The blade is
made of XC75, C130 and 15N20 Damascus. The handle is from iron wood. 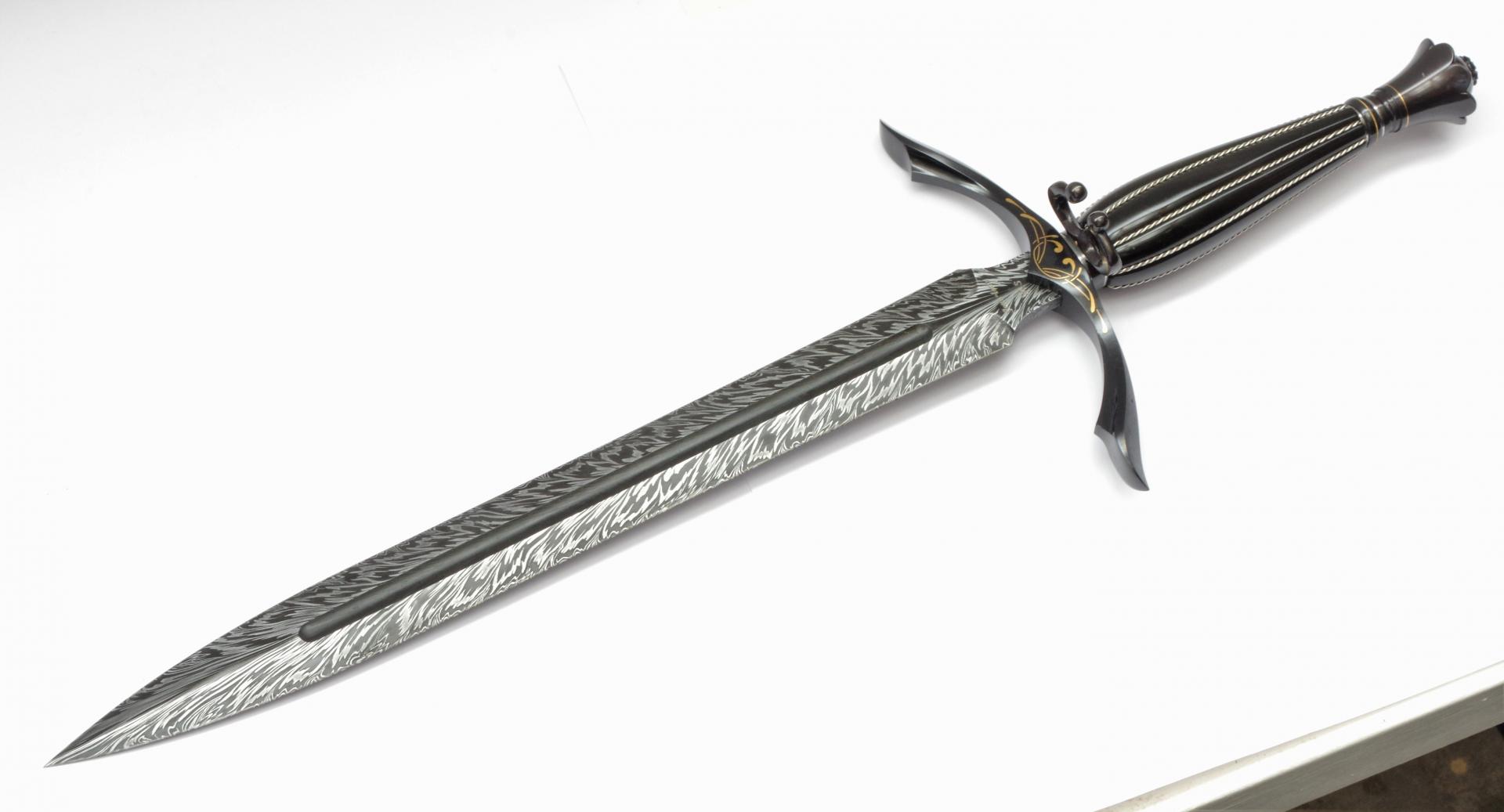 The ‘Power Flower’ by Jean-Louis Regel has a blade of feather Damascus and a handle of water buffalo horn.
The knife measures 48 cm. 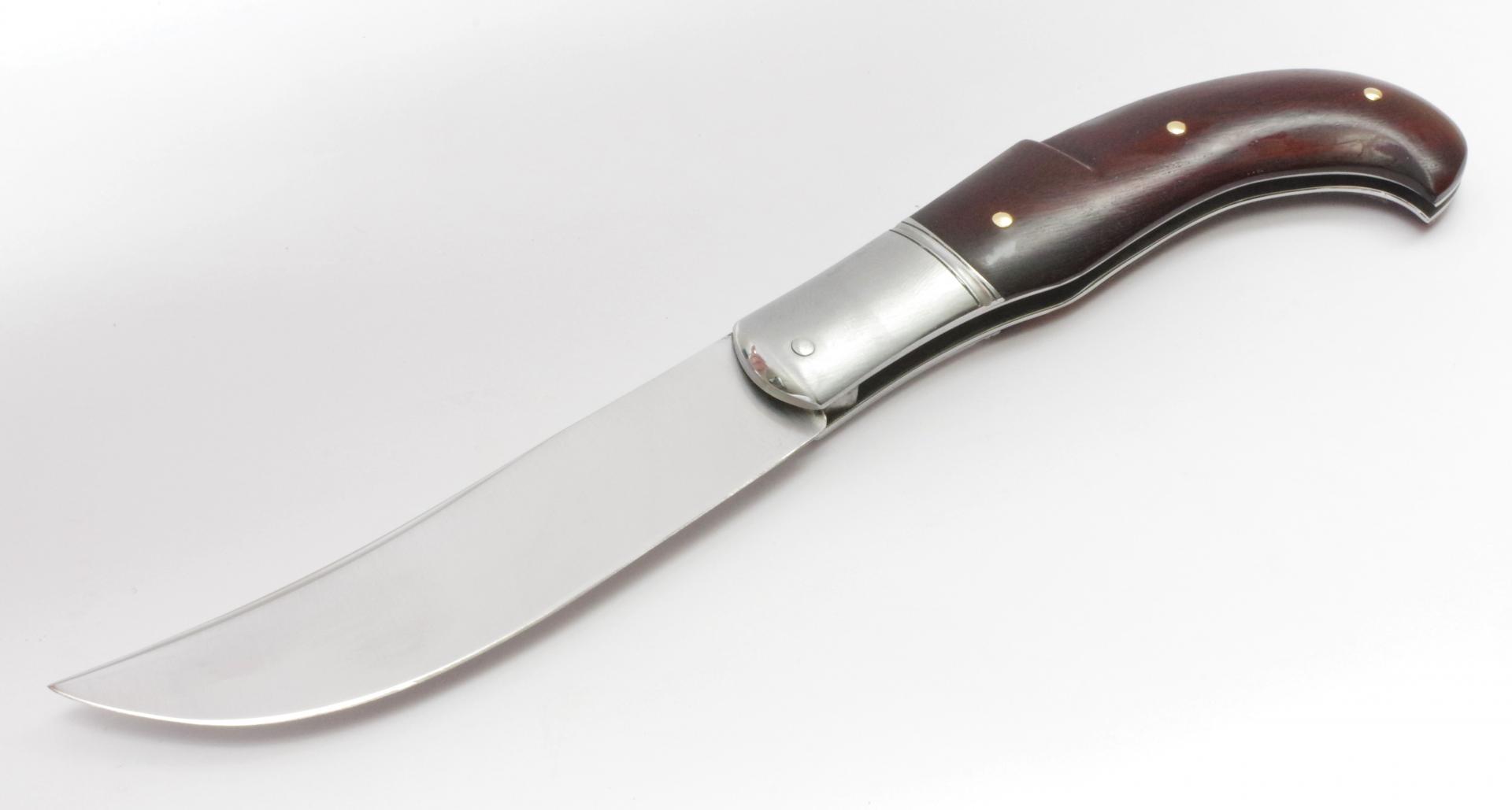 This knife by Guillaume Antoniucci is called ‘Le trois-fernale’. The blade is made of D2 steel, the handle
is made from Agarwood. 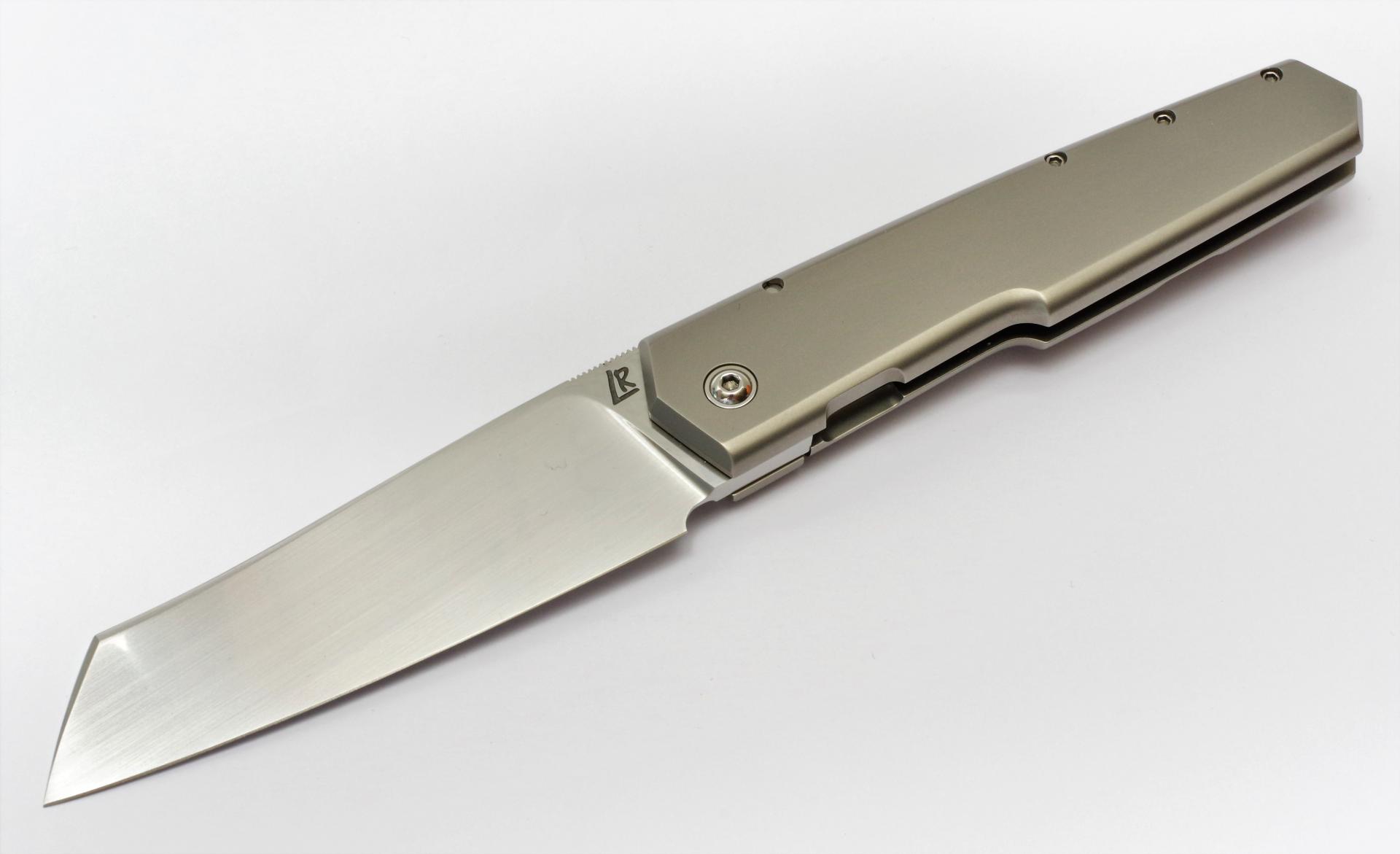 The ‘Sorkiffe’ by Rémi Lavialle. The 85 mm blade is of RWL34, the handle is titanium.

Nicolas Muros Le Rouzic works under the name ‘Norse Artefakt’. This model is called the Druzil.
The friction folder is made of  2 steel with a patina, and has carbon fibre handle scales with a copper spacer. 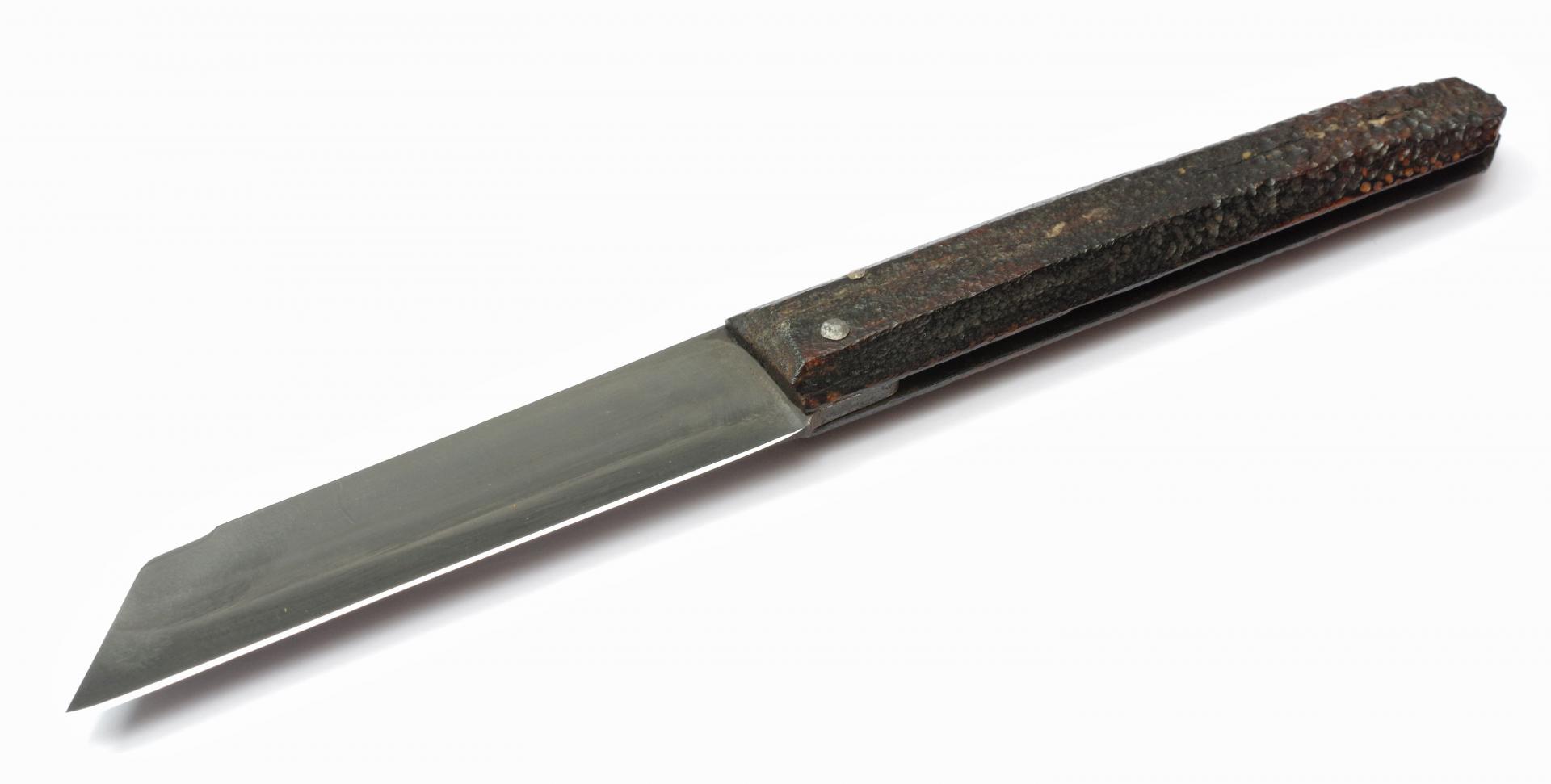 Benjamin Mittay made this Nékroz. The blade is selectively hardened XC80 (dnh 7). The handle is made
of Sambar stag, which was sculpted and coloured to give the impression of rusted steel.
Our sponsors
Advertisements
Dit is een geprinte versie van de publicatie op