Fortunately, we can also add the Coutellia in Thiers to the ever-growing list of knife shows that could be held again after two years of Covid. The show, which was held on 28 and 29 May this year, had 250 participants, ranging from knife makers to material suppliers, and attracted no less than 6400 visitors. There were also several changes. 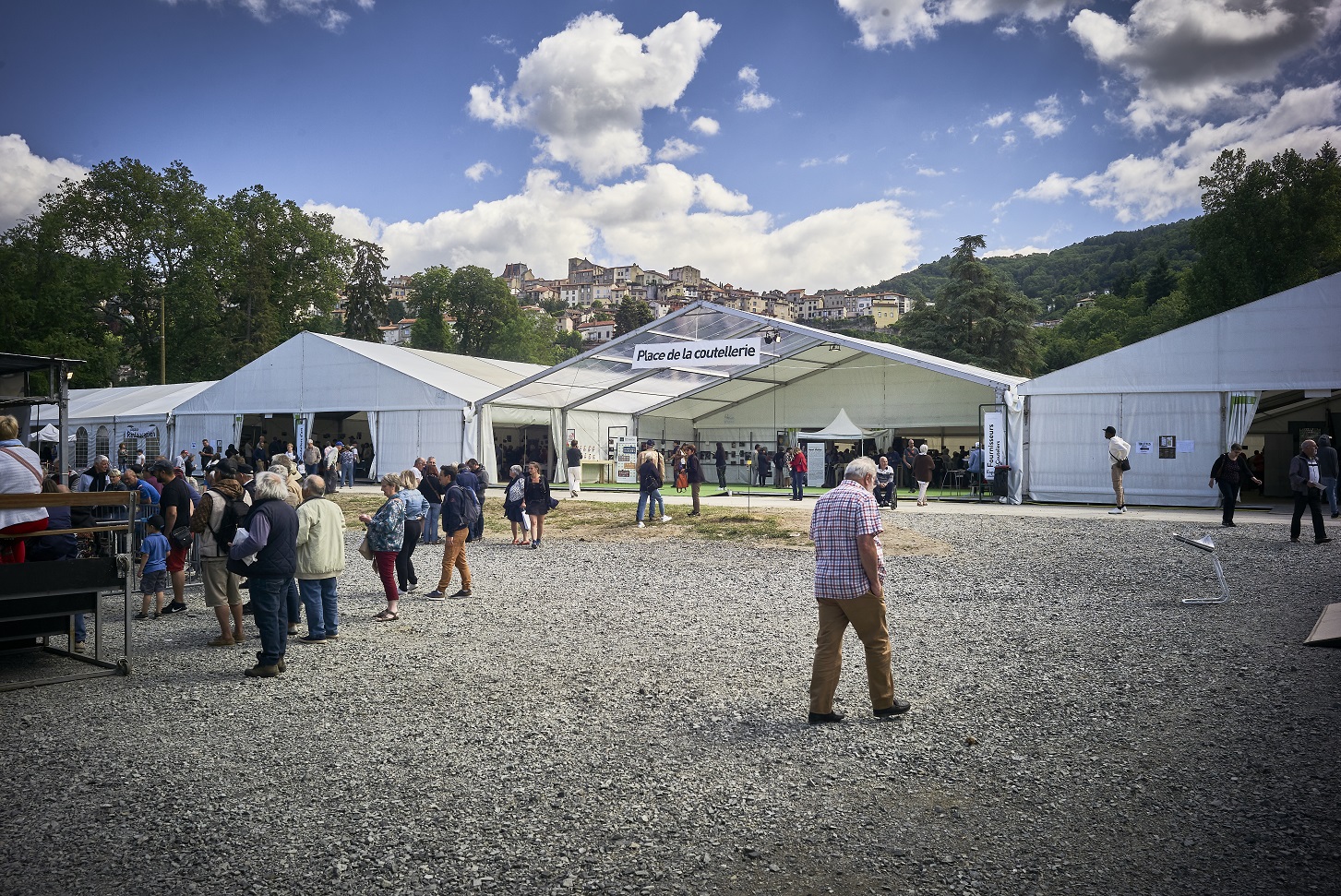 The new arrangement of the Coutellia in Thiers.
Perhaps the most important change was the fact that the Coutelia had moved - not far, a few hundred metres, but it was a farewell to the traditional venue of the salle polyvalente Cognet. It had a number of drawbacks. It leaked, but also caused a division among the exhibitors: the French knife makers were in the hall, the foreign knife makers in tents, and not everyone was happy with that division. The accommodation is now in large tents, in a spacious layout.
Coutellia 2022 had its usual awards (the public prize, jury prize and "Prix Coutellia"). The Prix Coutellia was won by master Jean-Pierre Martin, the jury prize by Jérôme Lamic, and the public prize by Ianis Fortin. Tim Bernard got the “Prix Groupama”,  awarded by assurance company Groupama.
In addition this year saw the first "Damascus World Cup" competition. Six teams of two or three persons were given the same basic materials and then had three hours to make a damask blade. The blades were judged by their creativity, aesthetics, technique, quality and expression. The first prize was won by a team of forgers from Bretagne, from the Hispamébro association. The team consisted of Cédric Lamballais, Gérard Almuzara and Éric Raoult. Apparently, the Damascus World Cup will be an annual side-event.
Coutellia 2023 will be held on 20 and 20 May. 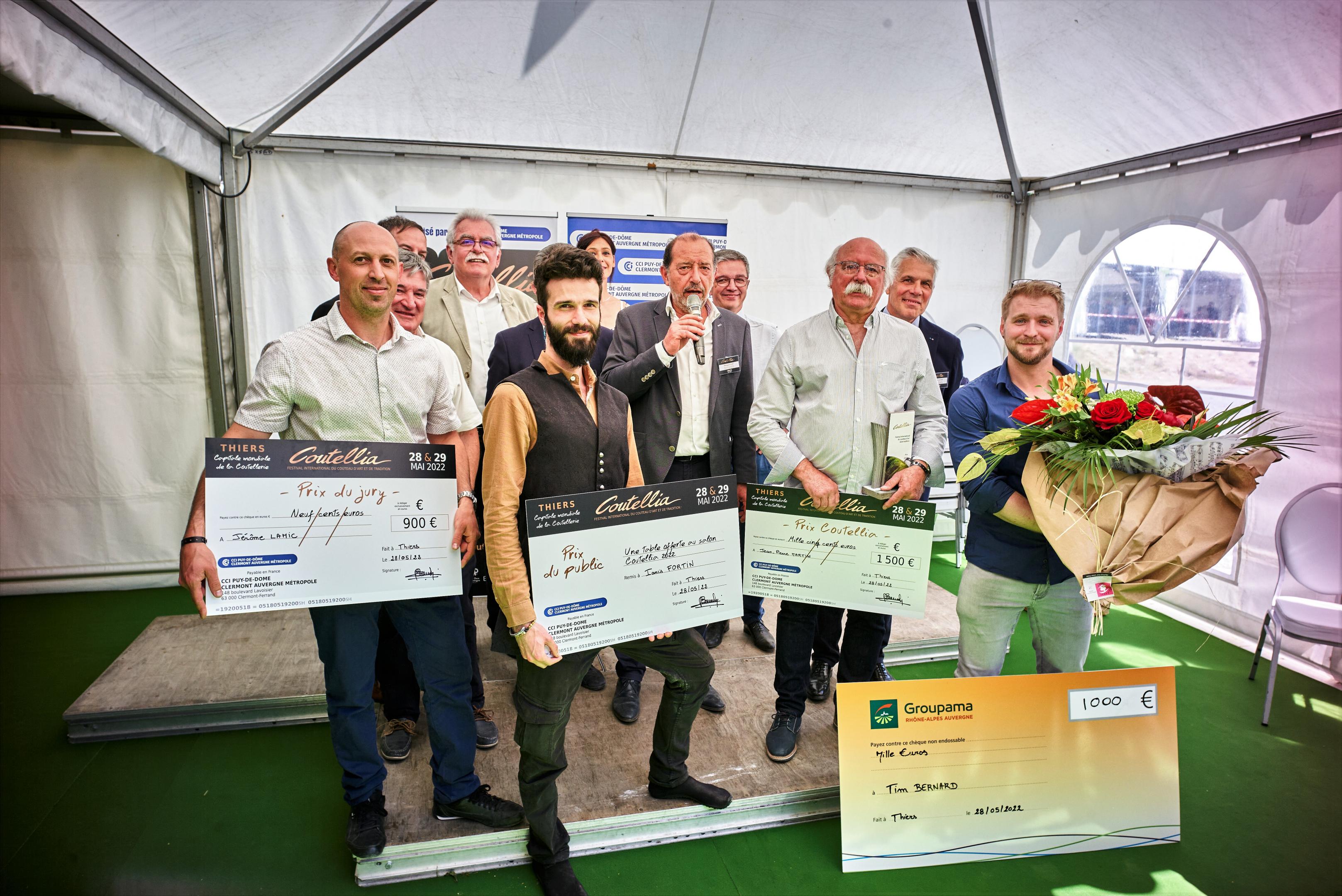 The participants of the Damascus World Cup competition.

The winning blade of the Damascus World Cup competition, forged by a team of forgers from Bretagne,
from the Hispamébro association.

A double liner lock folder by Attilio Morotti. Both blades have a flipper. The handle is carbon fibre with mother
of pearl inlays.

A back lock folder by Christian Penot. Damask blade, Titanium chassis with Mother of Pearl inlays.

The “41” by Frédéric Collin. D2 blade with a stonewash finish and Fatcarbon handle scales.

The “Morlock” by Frédéric Augé. Back lock folder with a 90MCV8 blade and Desert Ironwood handle.

The “Curve” by Jérôme Latreille. The blade is 14C28, the handle stainless and wharthog tooth.

A fixed blade by Pierre-Henri Monnet.

A multibladed knife by Nicolas Couderc, consisting of 17 pieces and 37 elements. The frame is
inlaid with22 carat Gold and Mother of Pearl.

Oyster knife by Paolo Simoës. The blade is 14CN28 and the handle is stabilised Philippine Mango wood.

Pierre Thomas made this knife inspired by Jules Verne’s novel Twenty Thousand Leagues Under the Seas.
The blade is wild carbon Damask, the brass handle is engraved by Mali Irié Cros.