German Knife and Sword Makers
There are books that everybody should buy. This is one of them. At least, for those interested in German blades and edged weapons, and the companies that made them during the last 150 years.
Let’s first set something straight: other than stated on the cover, German Knife and Swordmakers does not describe the period from 1850 until 1945. In fact, it continues its coverage until the year 2000. An embarrassing ‘slip of the pen’, but it makes the book even more valuable as the subtitle is completely accurate: ‘The definitive directory of makers and marks’.
Some figures will give an indication: the book contains a concise history of 1400 companies, identifies and explains 4500 company markings, both names and logos, shows 2400 of those logos, has 250 historical advertisements and dozens of reproductions from ancient catalogues and company ledgers, plus a series of amazing historical pictures. All of this is completed by authoritive texts, and a series of appendices.
Such a book, of course, does not appear just like that. The project began in the 1980s, with the British author Anthony Carter. He was compiling a book on German sword and blade makers, and got help from Henning Ritter from the Hubertus Schneidwarenfabrik in Solingen and his amazing archive.
The huge amount of German makers, predominantly from Solingen, led to the decision to publish this work in several volumes. Volume I (letters A-L) appeared in 2002 and was received with great enthusiasm. Unfortunately, Anthony Carter passed away that same year. Henning Ritter continued the project, based on the information already collected, working together with the British author John Walter. The final result is a revised edition, in one volume with, of course, the name of initiator Carter still prominently on the cover.
A major publication like this is hard to catch in just a few lines. It is an encyclopaedia, a history book (including the darker periods of German history), a tribute to the Solingen industry, and above all a fantastic journey through the recent history of blades. We can only repeat what we said at the beginning of this review: buy this book – you won't regret it.

The passion of straight razors
Didier Bianchi’s interest in straight razors began by accident, literally. He suffered a motorcycle accident when he was 20 years old. Miraculously, he lived through it without any fractures, but he was thoroughly bruised and could barely lift his arms. After a few days of rest, he went to his local barber who not only cut his hear, but decided the young man needed a shave as well. For this he used a straight razor and the experience changed Didier’s life. He became entranced by the delicacy of the process, the necessary skill required, and the pleasing result.
His fascination with straight razors stayed with him. He began to use them, collect them and discover different designs and maintenance practices. It was thus inevitable that Didier would come into contact with Gilles Reynewaeter from the company Thiers-Issard, which is at present, the only French company that still makes industrial straight razors. Theirs-Issard has an annual razor production output of approximately 18,000 pieces.
The book ‘La Passion des Rasoirs droits’ (The passion of straight razors) is a tribute to a unique tool and its use. Shaving with a straight razor, Didier Bianchi explains, needs the utmost concentration because of the extreme sharpness of the blade. In this way, it is almost a meditative practice.
Part of the book focusses on this process of shaving, other chapters deal with the abundance of razor models, and their production at Thiers-Issard. Most of the razors pictured stem from Thiers-Issard, or Reynewaeters personal collection. 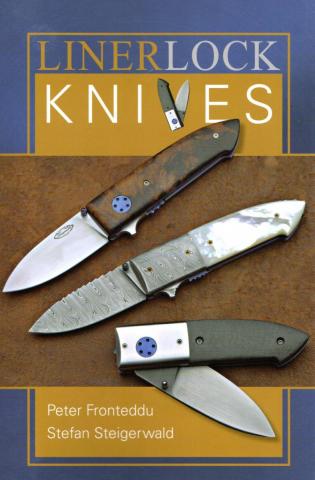 Linerlock Knives
Stefan Steigerwald and Peter Fronteddu have authored several volumes on knives and knifemaking. Most of these have appeared in German through Wieland Verlag, and in English through Schiffer’s workshop series. Their latest volume in this series is titled: Liner Lock Knives, ‘A guide to crafting a top-quality folding knife using a liner lock mechanism’.
The general lay-out is similar to that of the other volumes. It retains the spiral-bound cover, so the book stays open at the desired page, and includes a step-by-step guide with clear texts and excellent pictures. One warning though: as the subtitle on the cover explains, the guide is aimed at ‘intermediate to advanced level knifemakers’. It therefore assumes the reader possesses a certain level of experience.