David Lespect's little village of St Gervais sur Roubion in the heart of the Drome Provençale, France, was the venue for this first show he organised. It was planned for 2020, but as so many other shows it had to be cancelled. Finally it was held on 19 March. 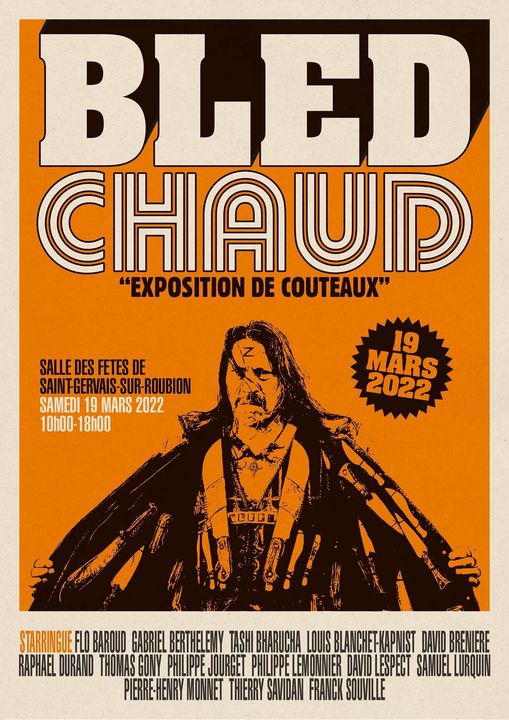 The name Bled Chaud is a wink; it is the phonetic spelling of how a Frenchman would pronounce the American ‘Blade Show’, which was held the same weekend. “Bled” also means "tiny isolated village".
With a deliberately reduced number of knife makers, this small show was above all oriented towards conviviality and a good atmosphere. Thirteen knife makers exhibited that day, some of them rarely seen in Europe and more present on the other side of the Atlantic; which did not fail to attract the interest of many amateurs and collectors.
In addition to the knife makers, other craftsmen were also present at the invitation of the organisation. 8ball kustom leather by Jeremy Guillaume, a talented saddler, presented a whole range of products and cases with impeccable finishes. Some of the fixed blades on the exhibitors' tables also featured his work. Nico Labrocante offered an impressive selection of beads in various materials.  David's “official" tattooist and childhood friend, Sébastien Aventure, was also present, offering to tattoo leather cases and belts.
Given the level of the exhibits, most of the tables were quickly emptied as soon as they opened. During the lunch break, the numerous visitors were able to refresh themselves and eat at the two food trucks present at this occasion. 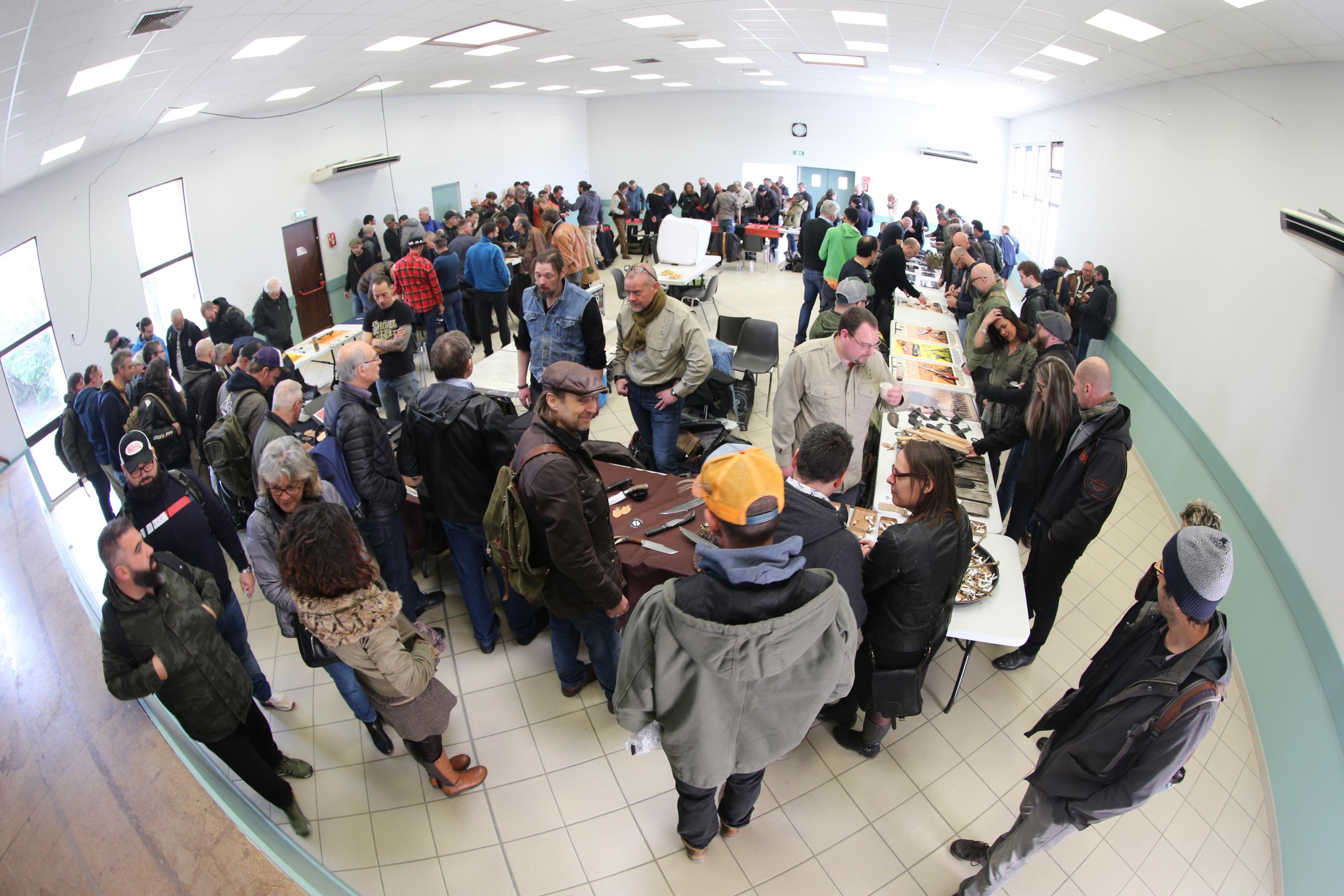 The afternoon was mainly devoted to forging demonstrations by the craftsmen present. Many villagers also came to see the work of one of their neighbours.
During this event, two artisans particularly caught my attention. The first is Gabriel Berthelemy (forge AGAB), a young blacksmith from the Drome region, who showed a very beautiful collection with an already strong style. It was sold out in a few minutes.
The second is Belgian knife maker Samuel Lurquin, who needs no introduction, who exhibited, among other things, the extraordinary reproduction of the sword of Conan's father. On this project, four craftsmen followed one another:
- Samuel Lurquin, for the creation of the Damascus steel ingot and the engravings.
- Gaël Fabre, a specialist in swords, who made the blade.
- Serge Raoux for the production of the mounts (guard/pommel) in cast bronze
- Stéphane Auberthié for the creation of the handle in woven leather
It was, in the opinion of all those present, a very nice event, which, although small in size, was of a rare conviviality. 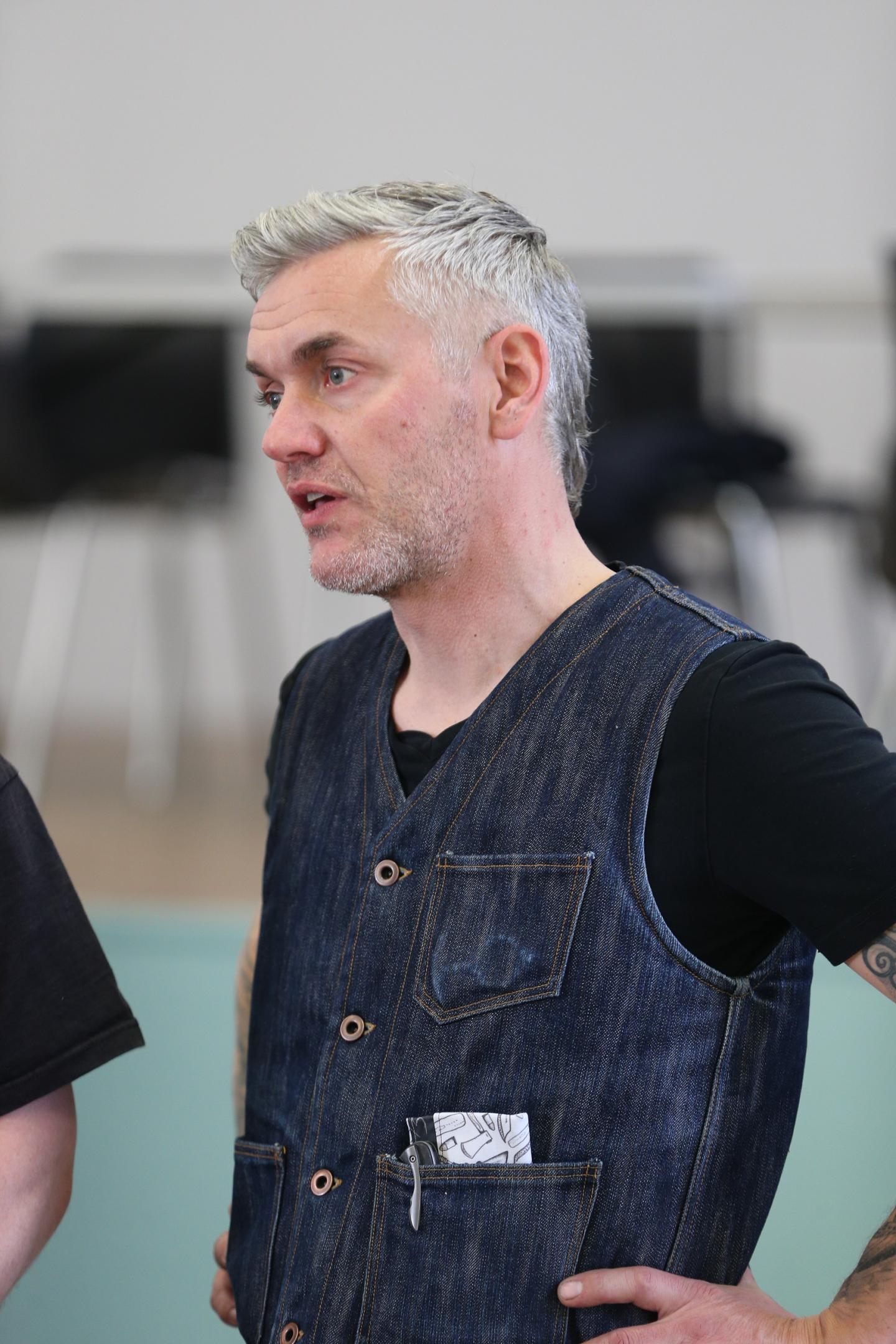 David, how did you come up with the idea of the Bled Chaud?
DL: The initial idea was to find an event that would bring in money for the "amicole", an association that organises operations throughout the year to raise funds for school outings or activities.

How did the people of St Gervais welcome this event?
DL: The people loved the day, I got a lot of positive feedback. I think the good weather also contributed to the success. After two years of restrictions and many cancelled events, people wanted to get together and enjoy some convivial moments.

A Bled Chaud in 2023?
DL: I must admit that before the show I wasn’t sure if there would be a 2023 edition. But given the success and the positive feedback from cutlers and visitors...it seems like a good idea! To be confirmed....

The final word?
DL: I would like to thank my knife making friends who followed me in this project, my wife Aude who supported me a lot in the organisation, my family for the help with the logistics, the visitors, as well as the commune and its employees. 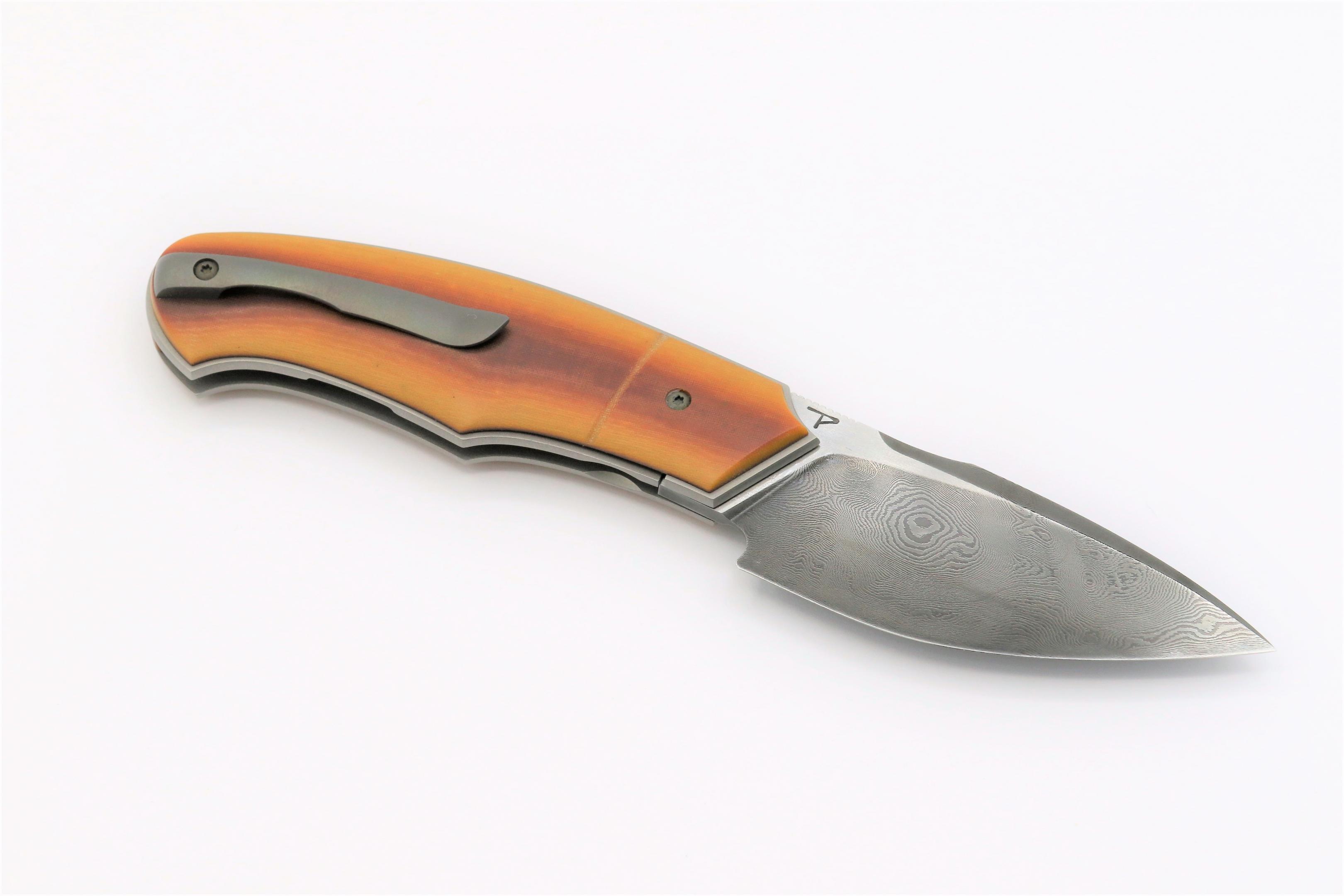 A linerlock folding knife by David Lespect. The blade is Carbon Damask forged by Samuel Lurquin,
the liners and clip are Titanium and the handle scales are Vintage Micarta. 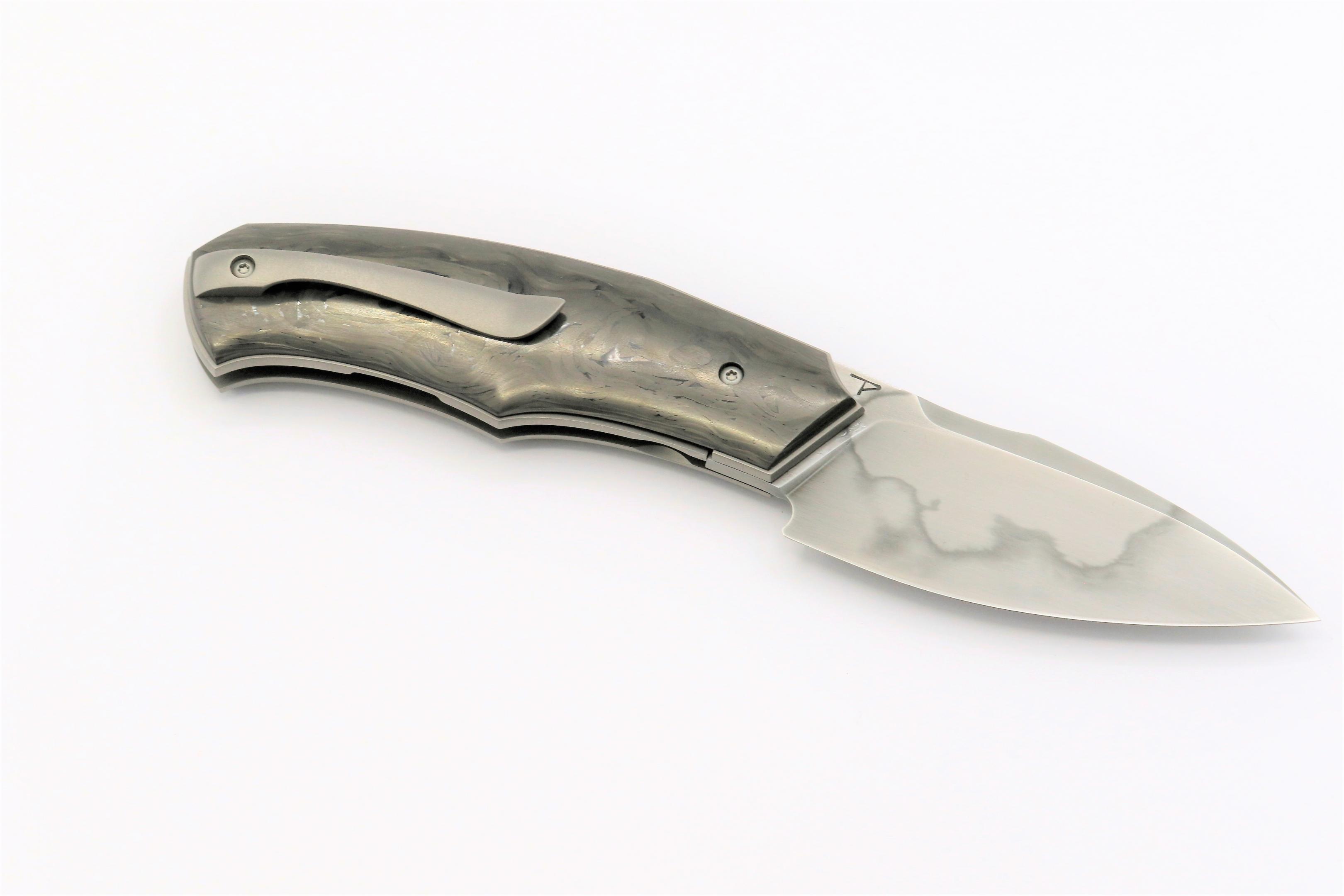 An integral by Samuel Lurquin, with a Carbon Damask blade, handle of heated maple
and pouch by Jeremy Guillaume (8ball kustom leather). 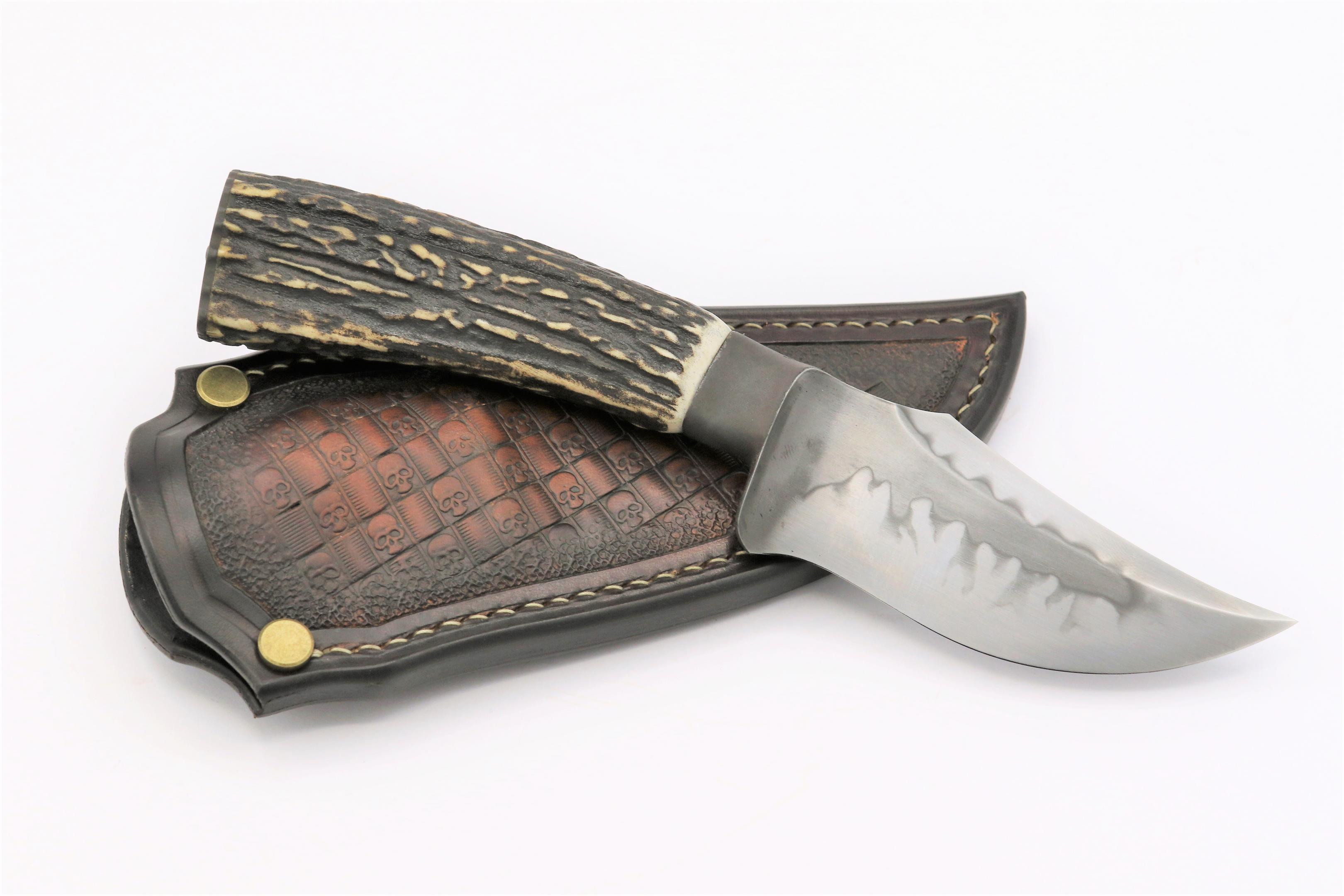 A semi integral fixed blade from Samuel Lurquin with a Deer Antler handle. The pouch is made by Jeremy
Guillaume (8ball kustom leather). 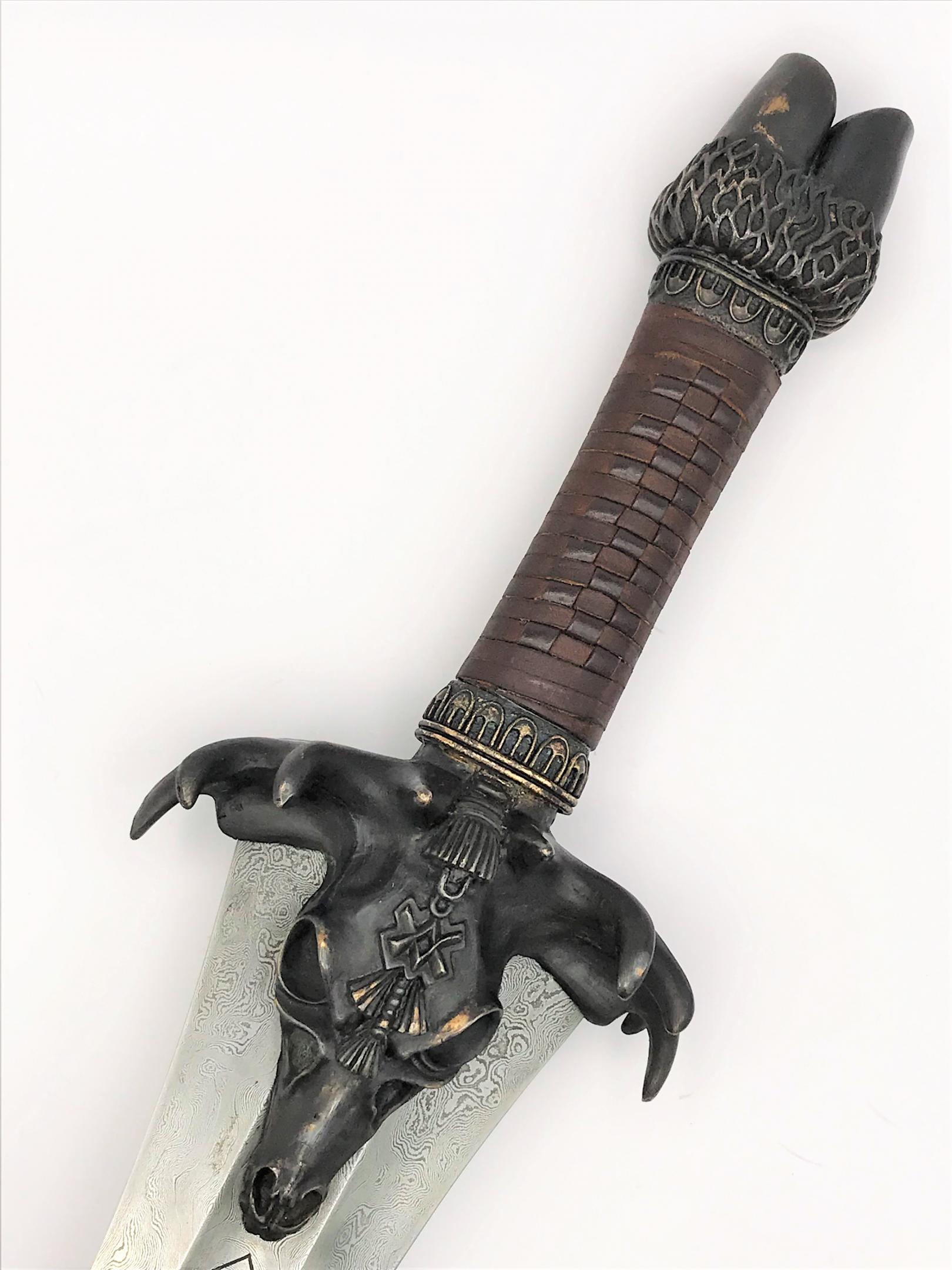 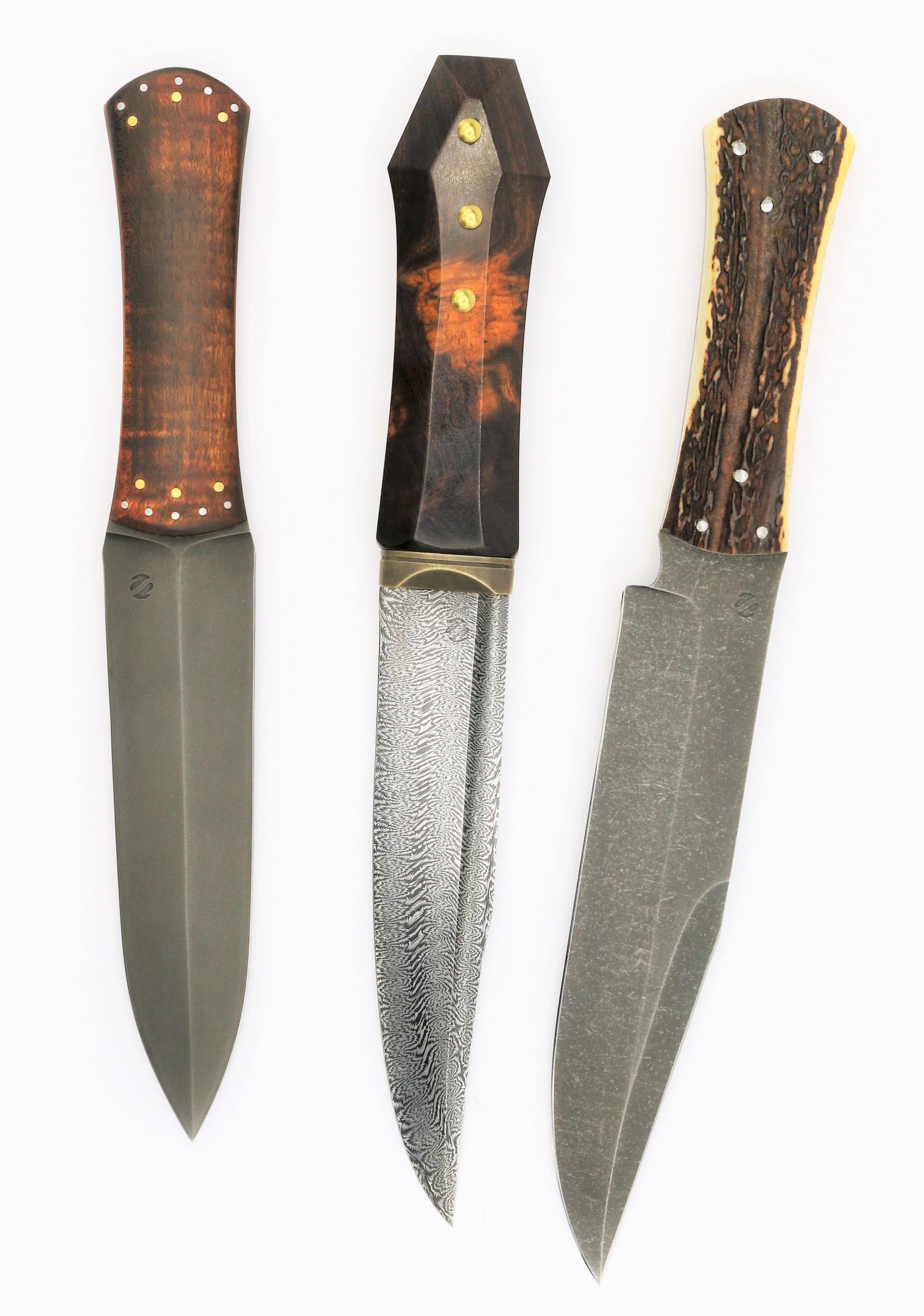 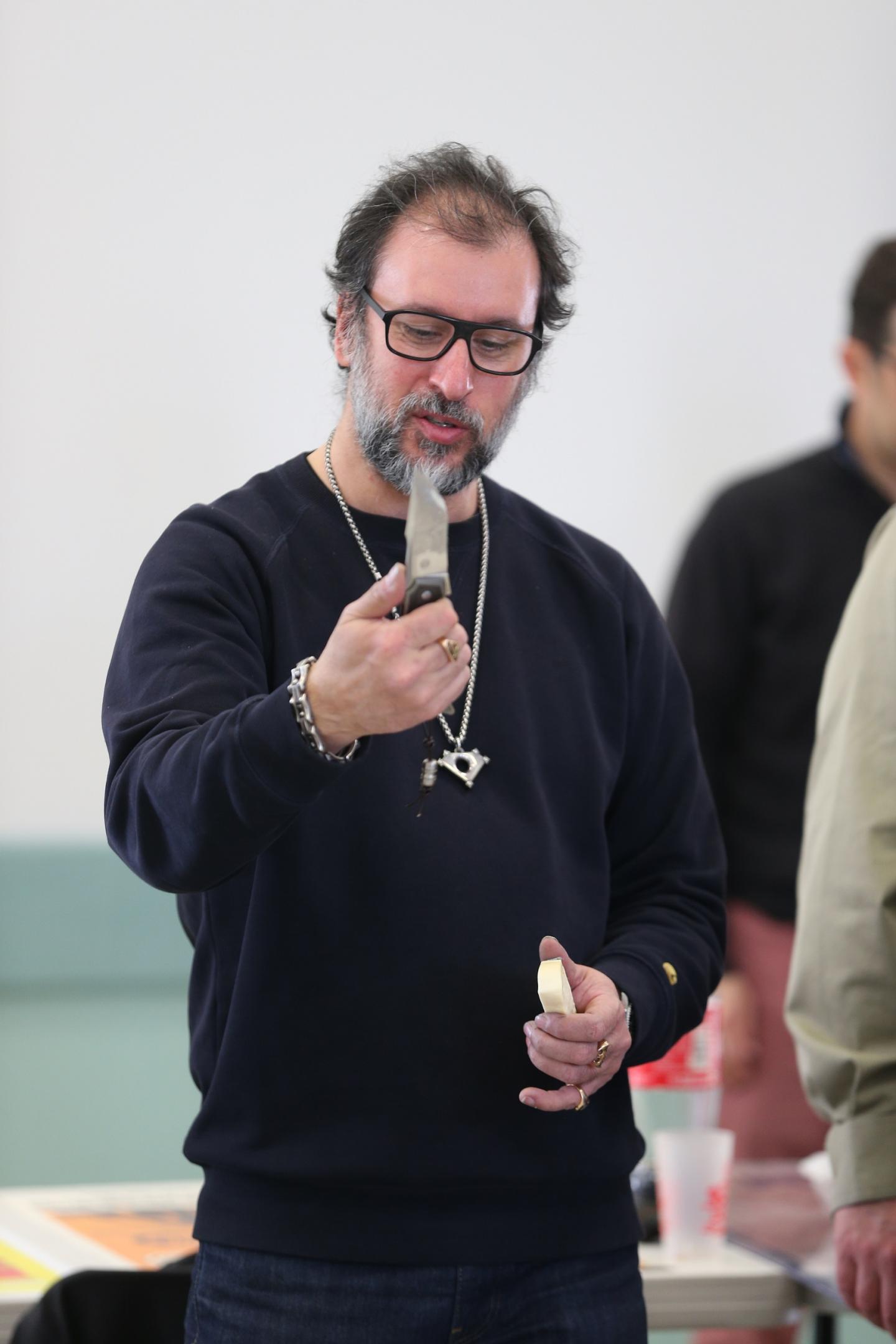 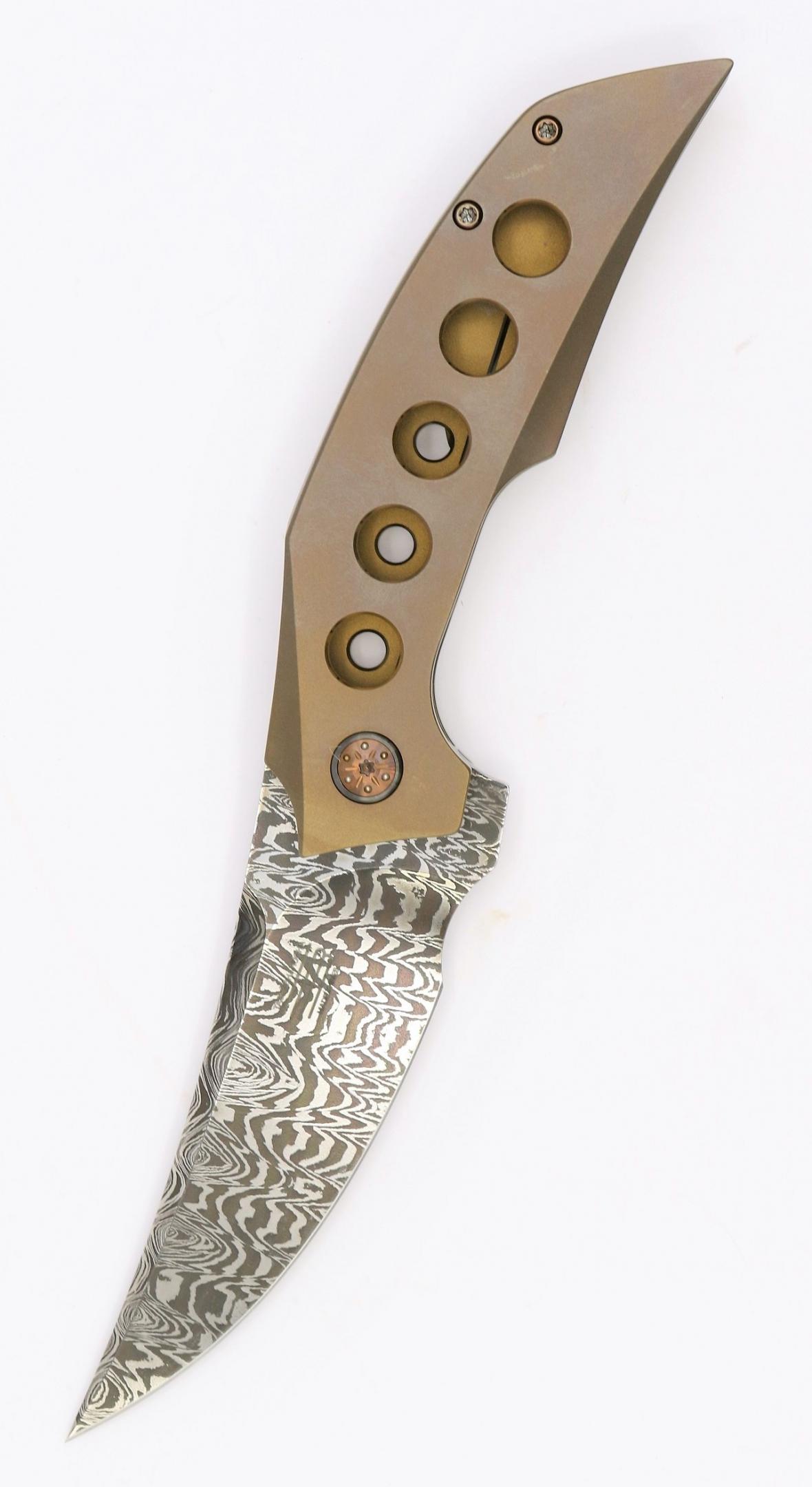 Three of Tashi Bharucha’s folders: the ‘Velocity’ up front and in the centre and the ‘Die Hard’ at the rear. 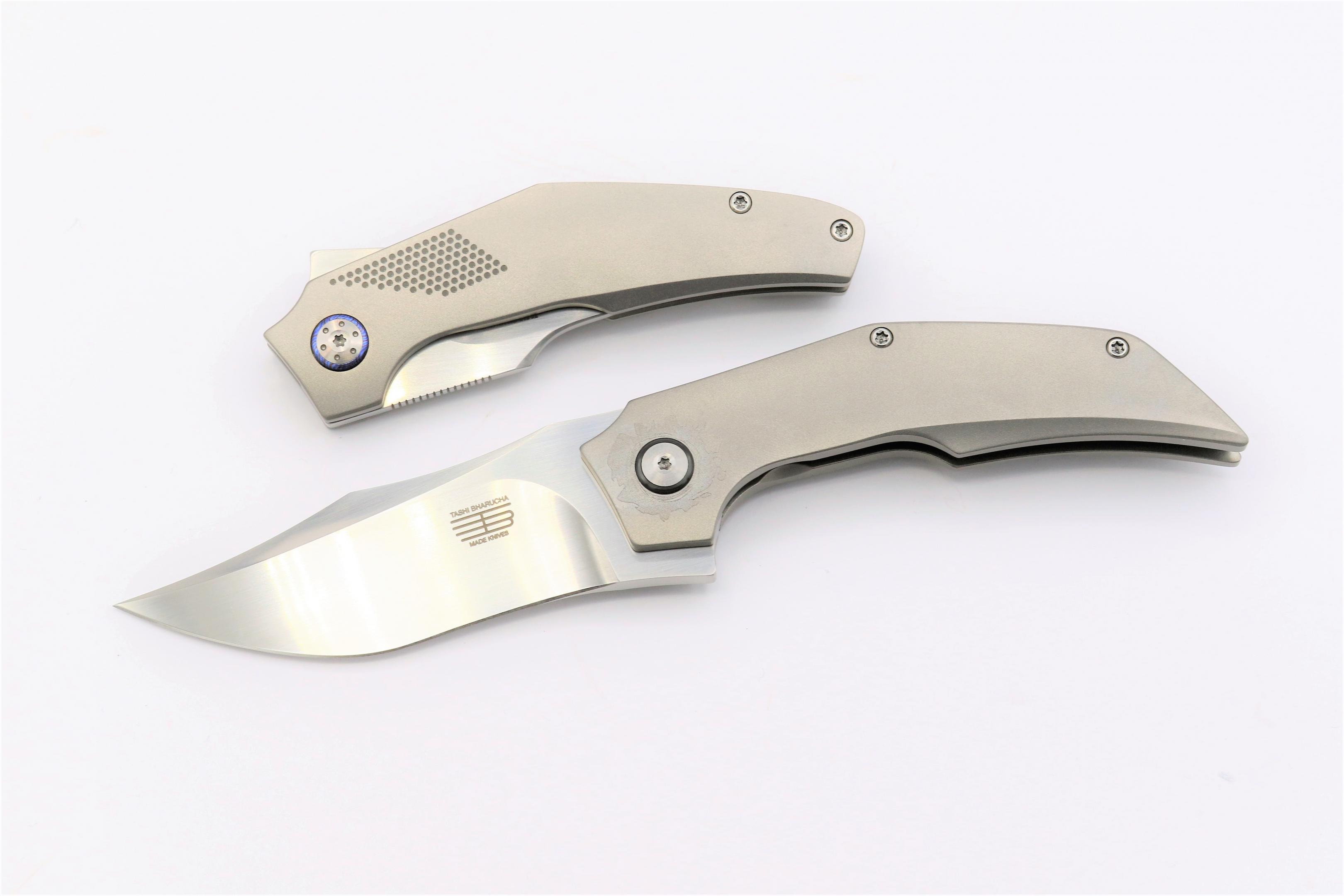 The ‘Die Hard’ (top, folded) and the ‘Velocity’. Both have an RWL34 blade and titanium handle. 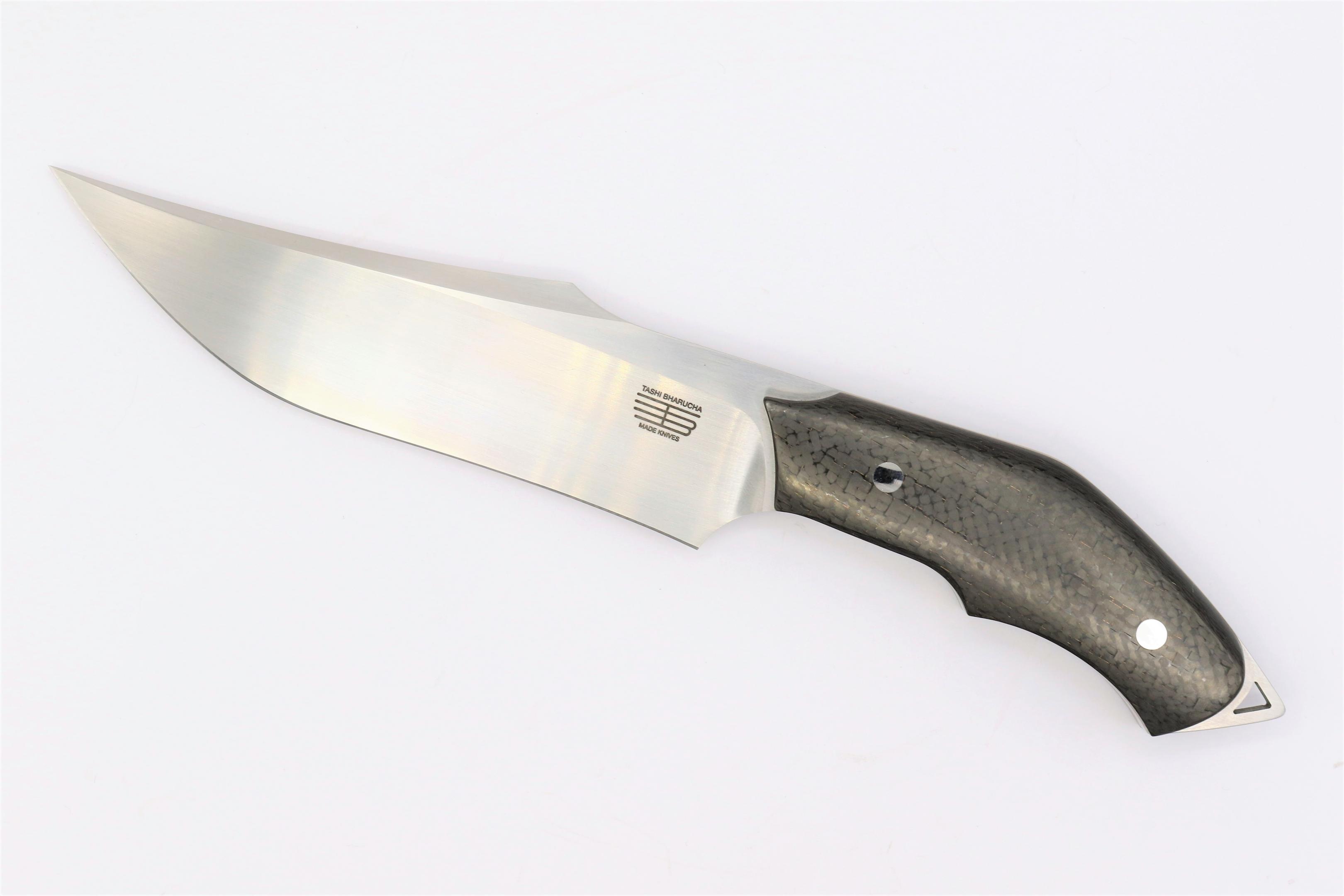 A large fixed blade by Tashi Bharucha, with an RWL34 blade and Carbon Fibre handle scales. 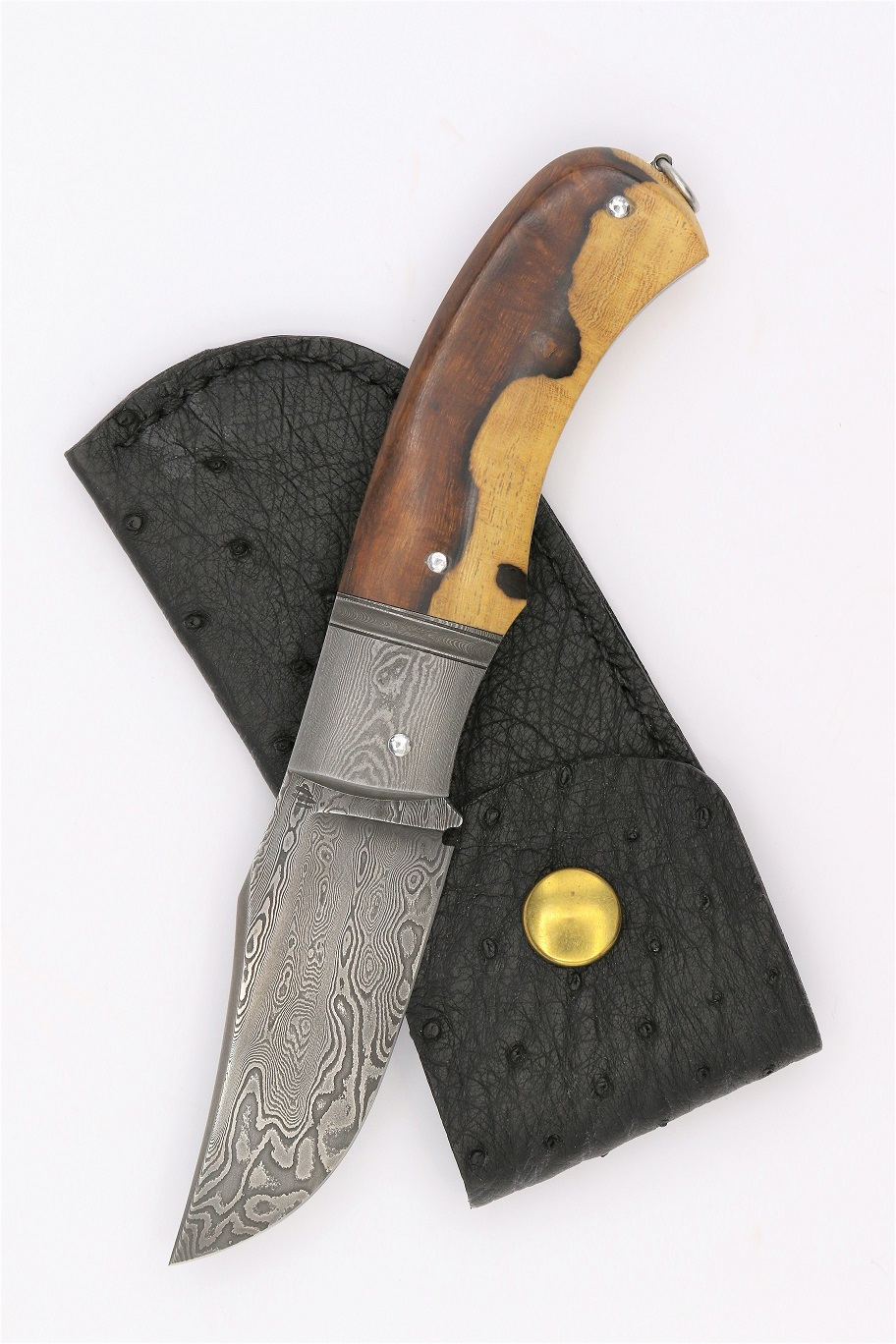 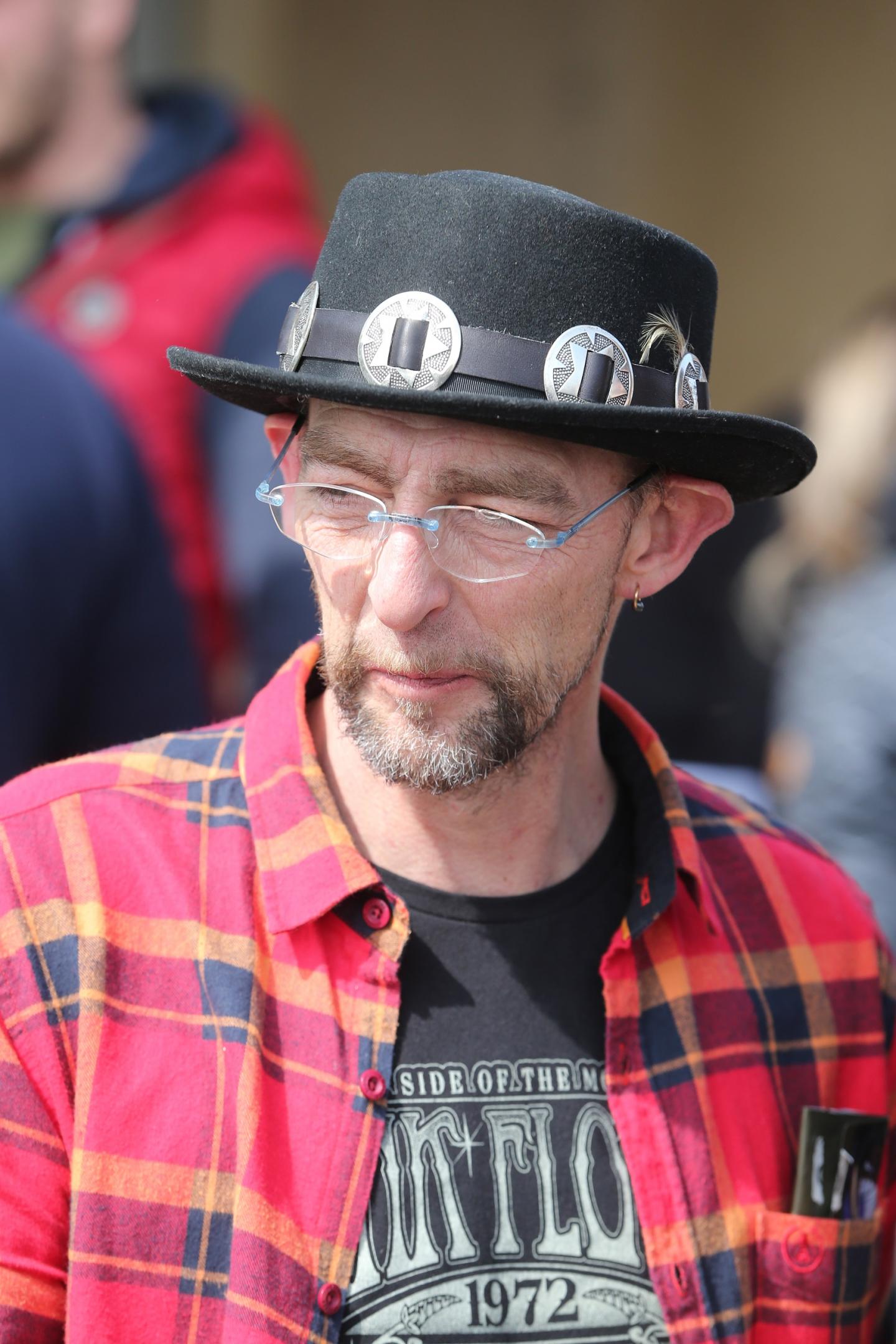 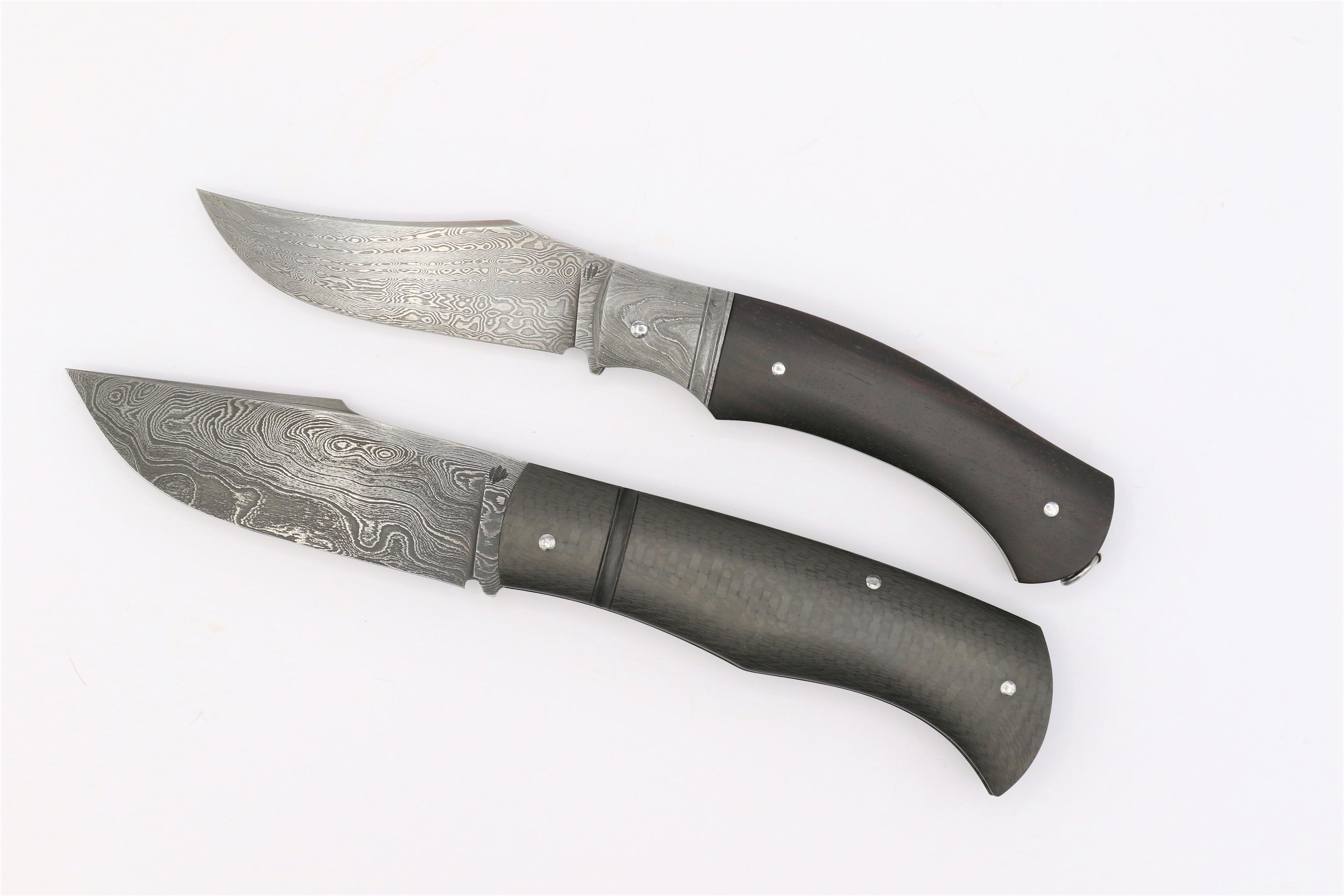 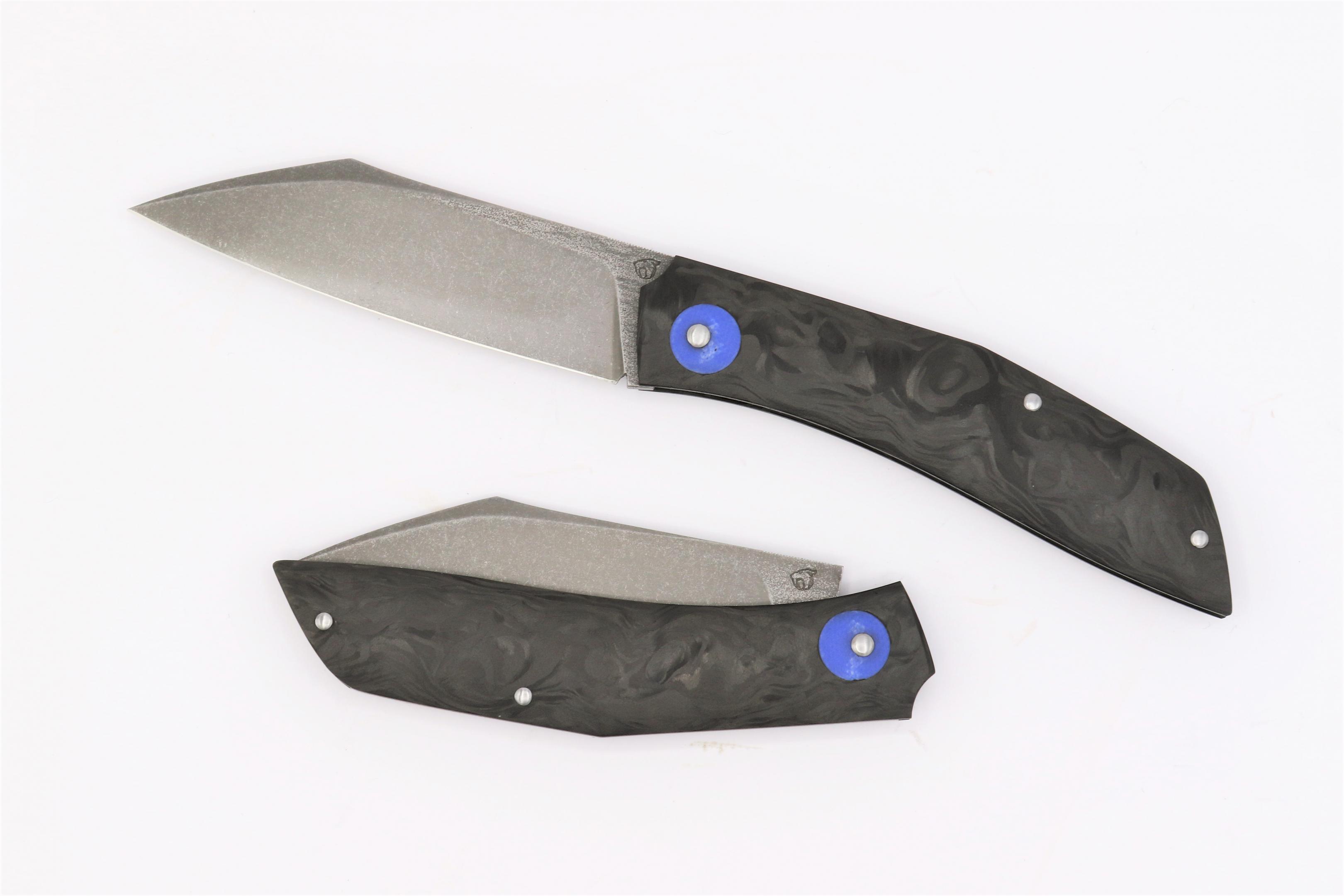 A folding knife by David Brenière, open and closed. The blade is Elmax Inox, the handle scales are
marbled Carbon Fiber with blue G10 inlays. 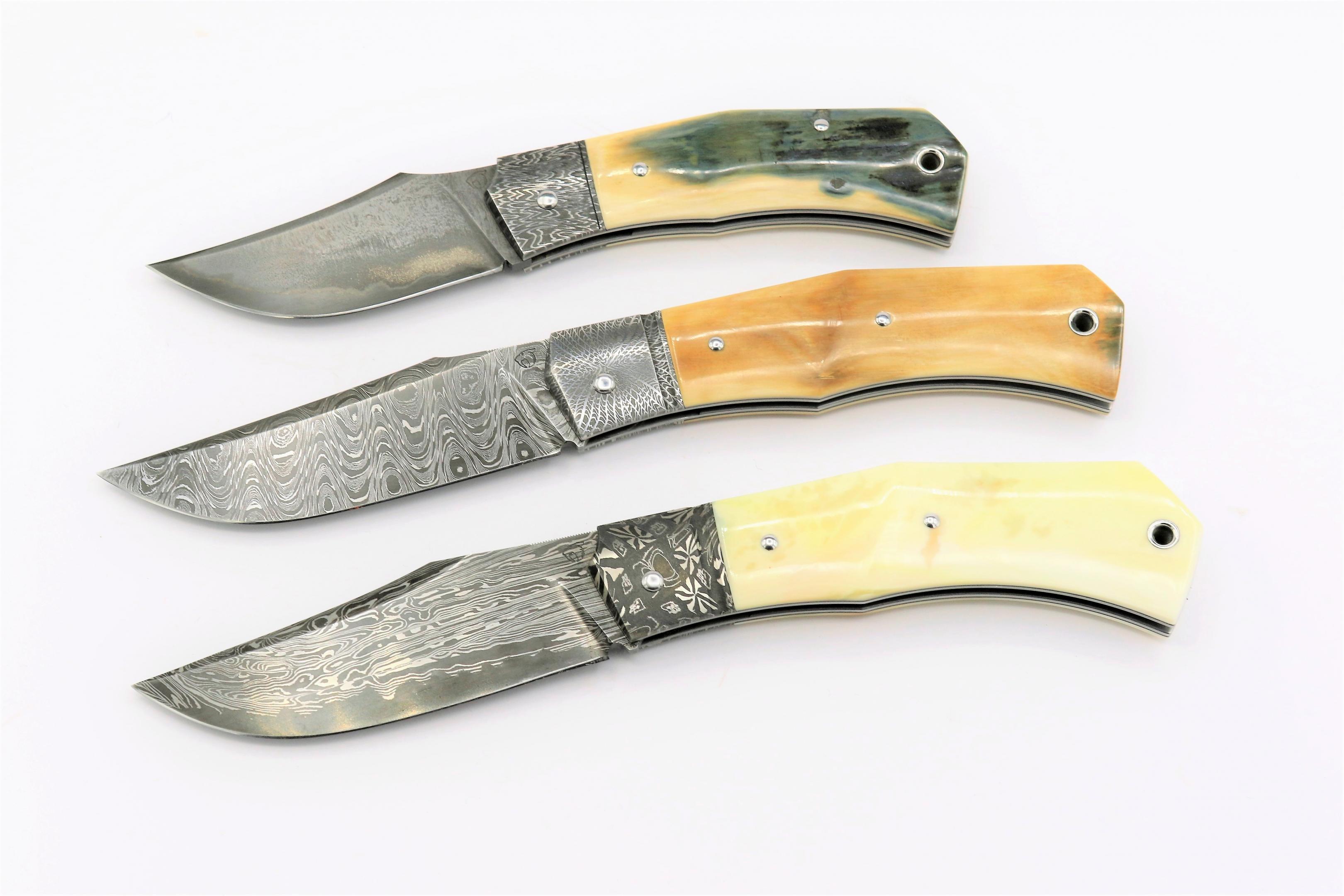 The same three knives as above, folded. 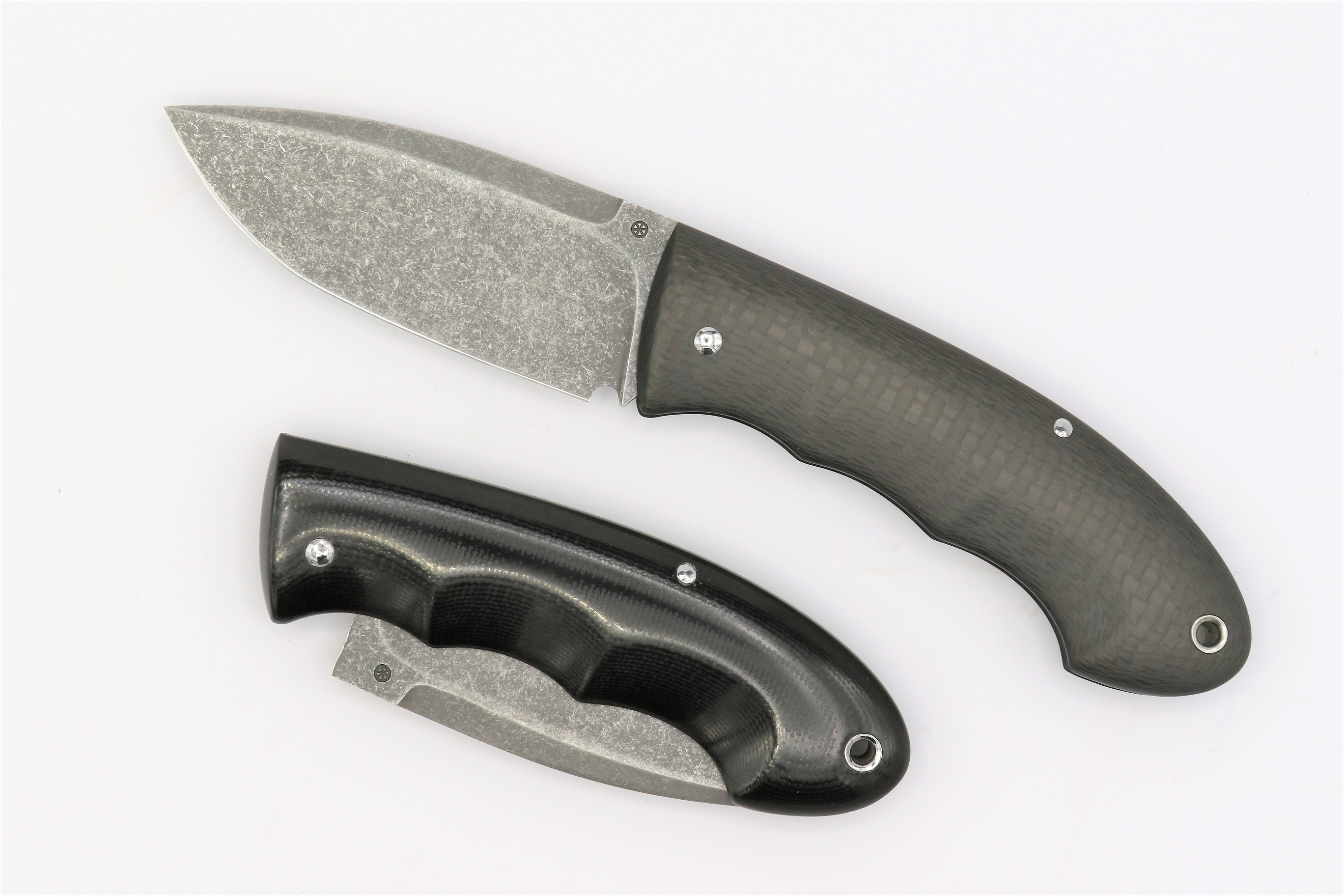 The ‘Upper-cut’, a prototype by Raphael Durand. The blade is 80CrV2 stonewash, the handle scales are
Carbon Fibre (left side) and G10 (right side). 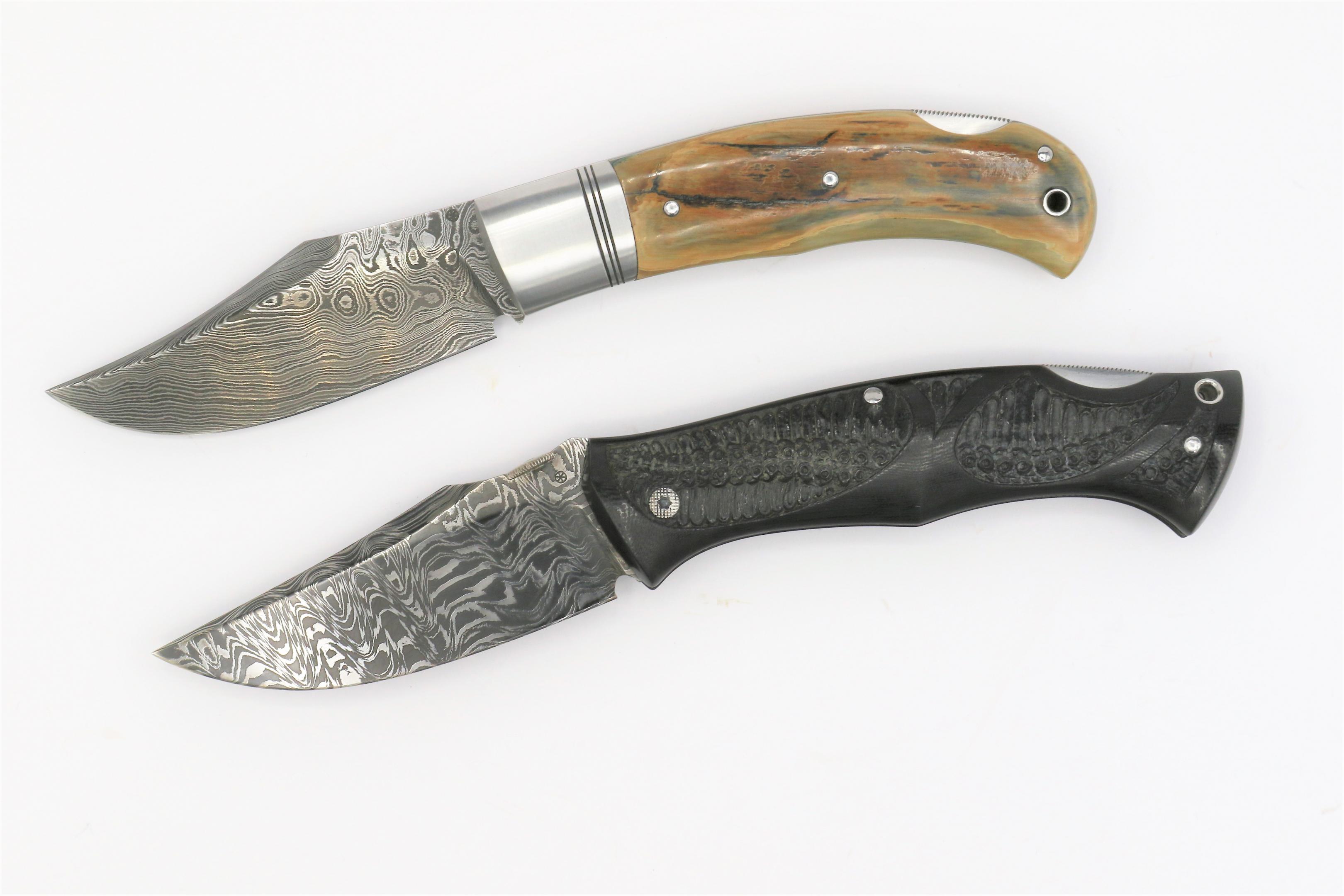 The ‘Cim-Bowie’ (top) and ‘Spartan’, both by Raphael Durand. Both have a blade from Samuel Lurquin Damask.

Two version of the ‘Knuckle’ by Thomas Gony (GT Knives).

A linerlock folder by Gabriel Berthelemy. The blade is RWL34, liners and bolster are Titanium and the
handle scales are walnut. 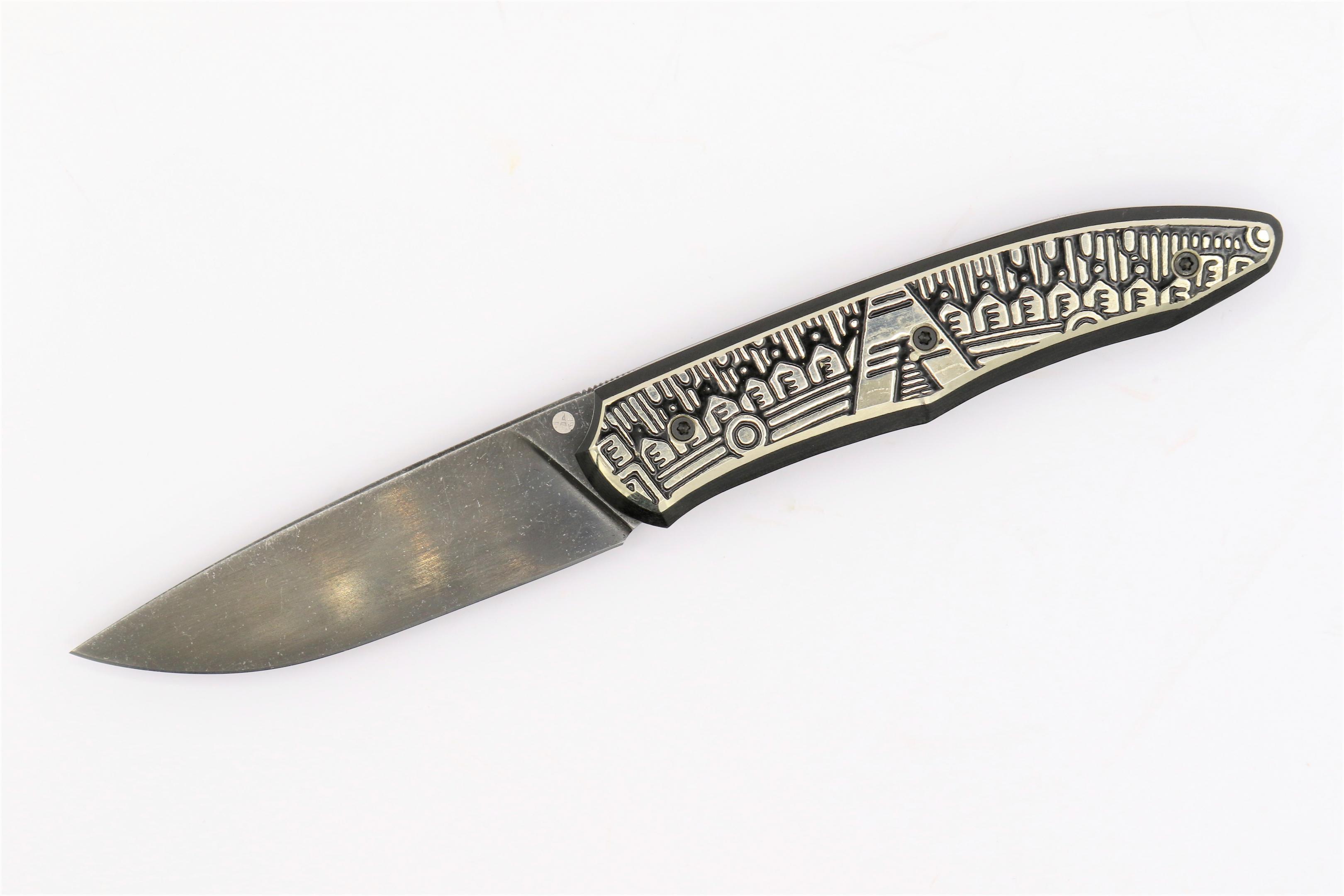 Two fixed blades by Pierre-Henri Monnet, both with 90mcv8/15n20 blades. 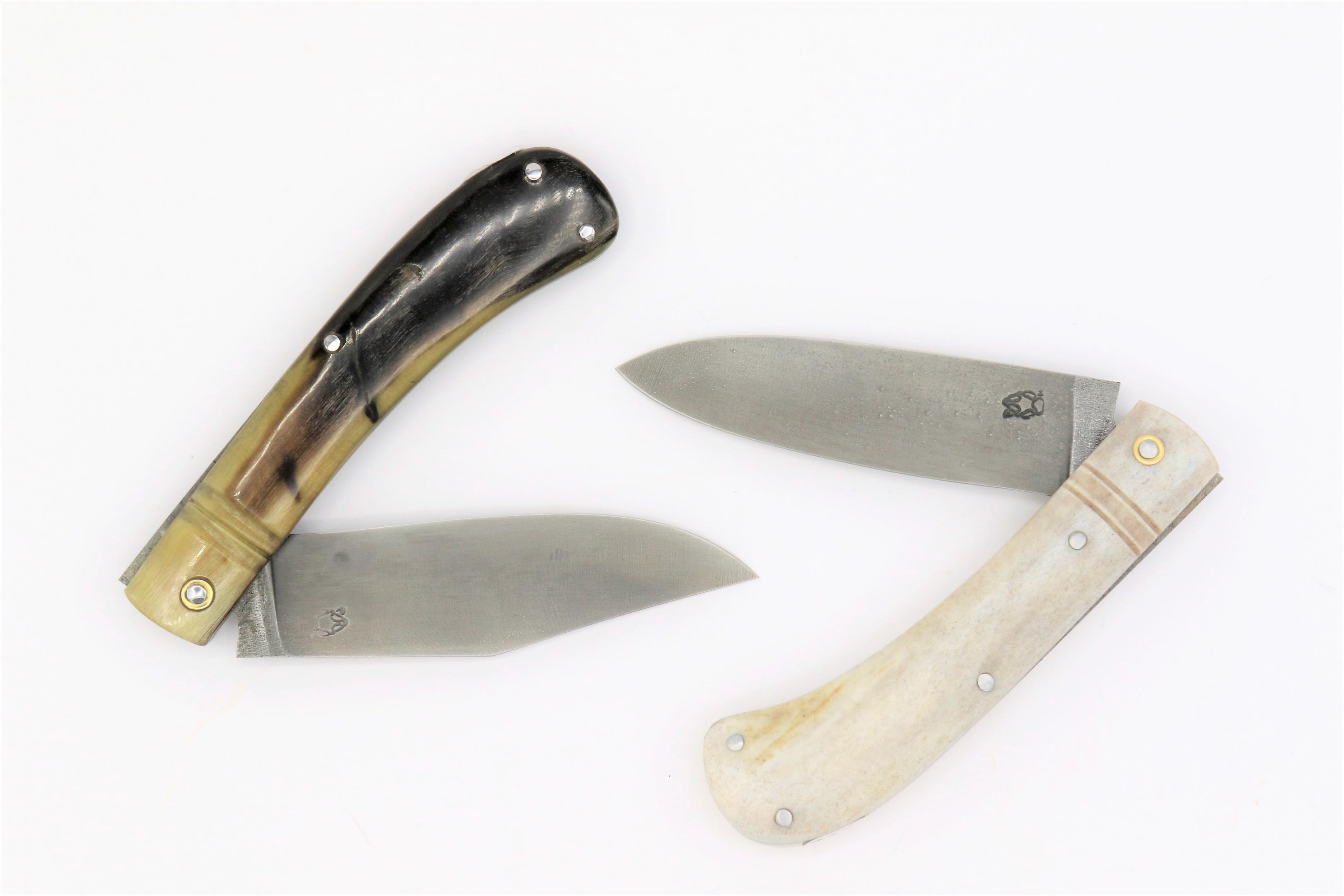 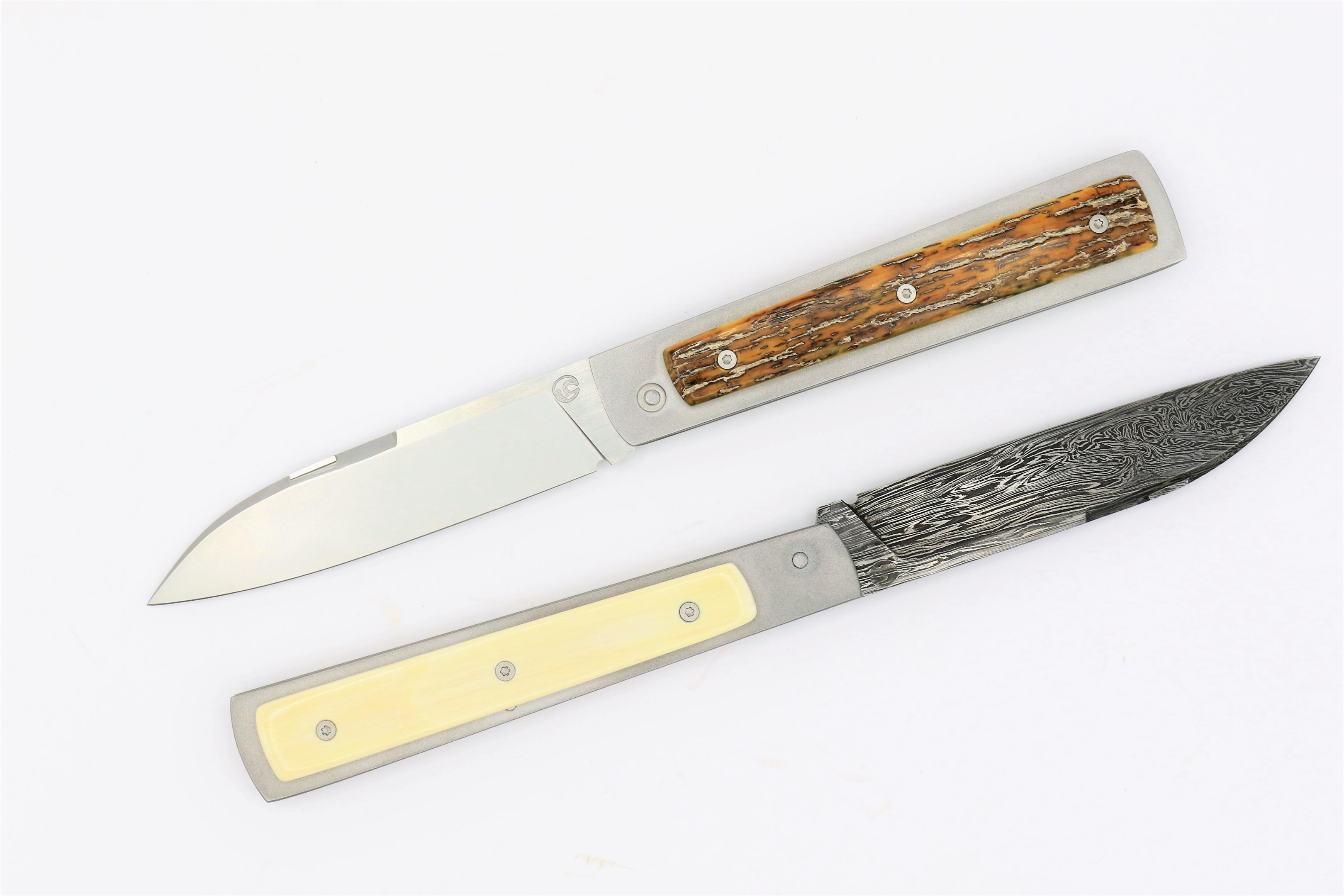 Two folders by Louis Blanchet Kapnist. The upper knife has a RWL34 blade and mammoth handle scales,
the lower one has a Carbon Damask blade and Mammoth pulp handle scales.