The poster gives a hint: “Albacete meetings”. Indeed, there were meetings of the representatives of knife capitals, meetings of blade and cutlery museums, meetings of knife makers, knife enthusiasts, and suppliers of tools and materials. And then there were workshops, demonstrations and exhibitions. In June this year, Albacete was a very busy place.
Text and pictures: Bas Martens 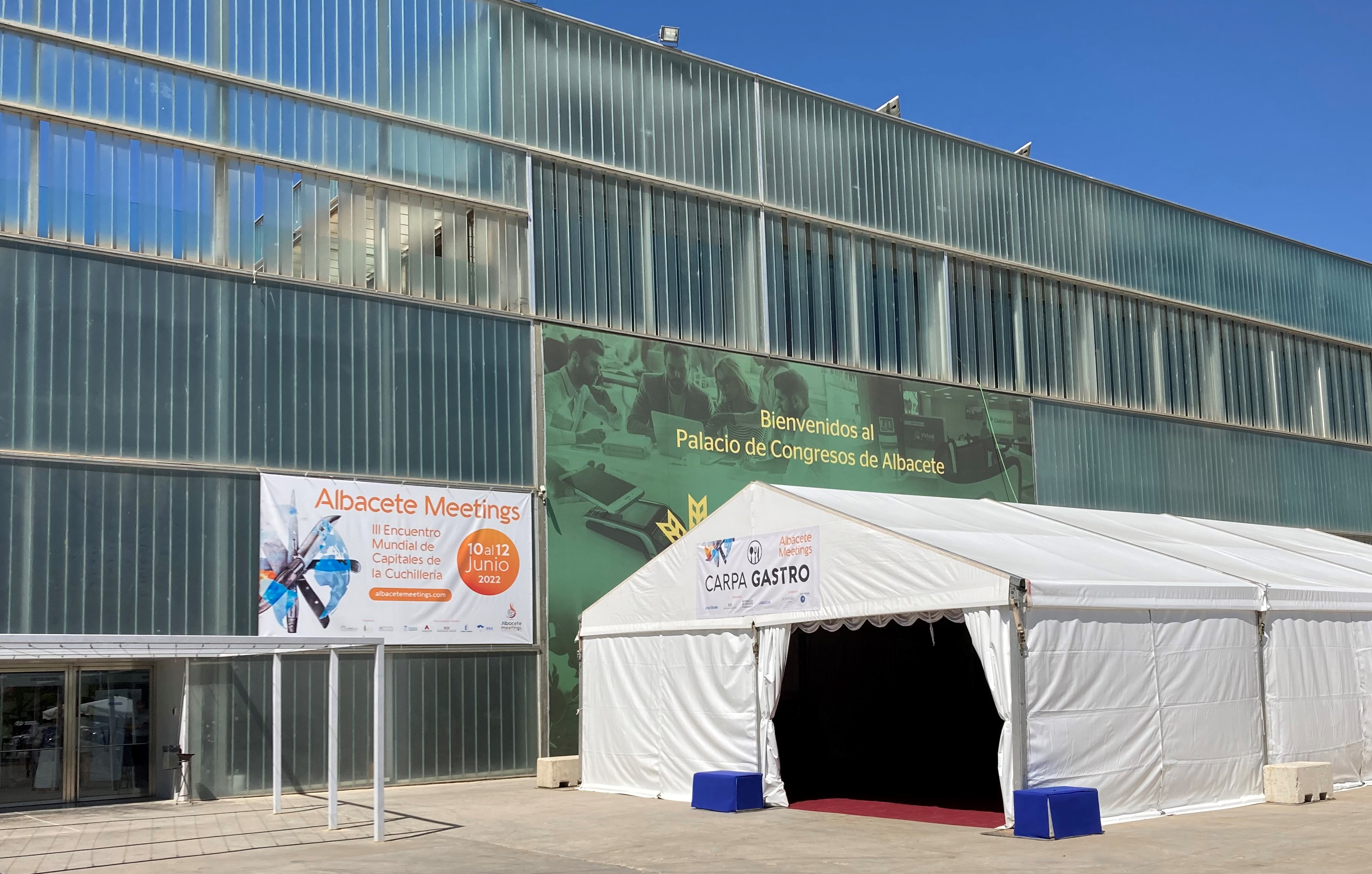 The entrance of the Palacia de Congresos de Albacete, venue of the 12th edition of Ibercut.

In 2018, at the initiative of the Coutellia in France, the “1ère Collection Mondial de Coutellerie” was held in Thiers, where knives from different European "knife capitals" were presented. The idea was that the representatives of the most important centres of the world would meet biannually, to exchange information and above all join forces to support the craft of knife making. This was baptised the World Capitals of Cutlery Meeting.
In 2020, Albacete was to host the meeting, but again Covid threw a spanner in the works. It was not until this year that the pandemic was sufficiently under control, and so the third World Capitals of Cutlery Meeting was held from 10 to 12 June. But not only that: the organising APRECU (Asociación de Cuchilleria y Afines de Albacete - Association of cutlery and related products of Albacete) had also arranged a meeting of international Cutlery Museums, a series of meetings for companies involved in cutlery business, a presentation World Wide Cutlery Collection Exhibition (by now a travelling exhibition with highlights from the different knife capitals), and finally the twelfth edition of Ibercut, the annual knife fair.
It seems a rather full programme, but the different parts were intended for different groups. European Blades Mag. concentrated on Ibercut, with a few side-steps, such as the opening of the World Wide Cutlery Collection Exhibition in the Museo Municipal de la Cuchilleria de Albacete (the Municipal Knife Museum of Albacete). The  museum had added a little extra, consisting of a "Knife maker's Notebook": 28 pages of drawings showing knife types from all over the world. The drawings are part of the exhibition and were handed out as a set to those present at the opening of the exhibition.
We would have liked to see more of Albacete itself, with its wonderful architecture and many knife shops, but on the eve of the first Spanish heatwave, half an hour of walking was more than enough. Hopefully there will be an opportunity for a second visit. 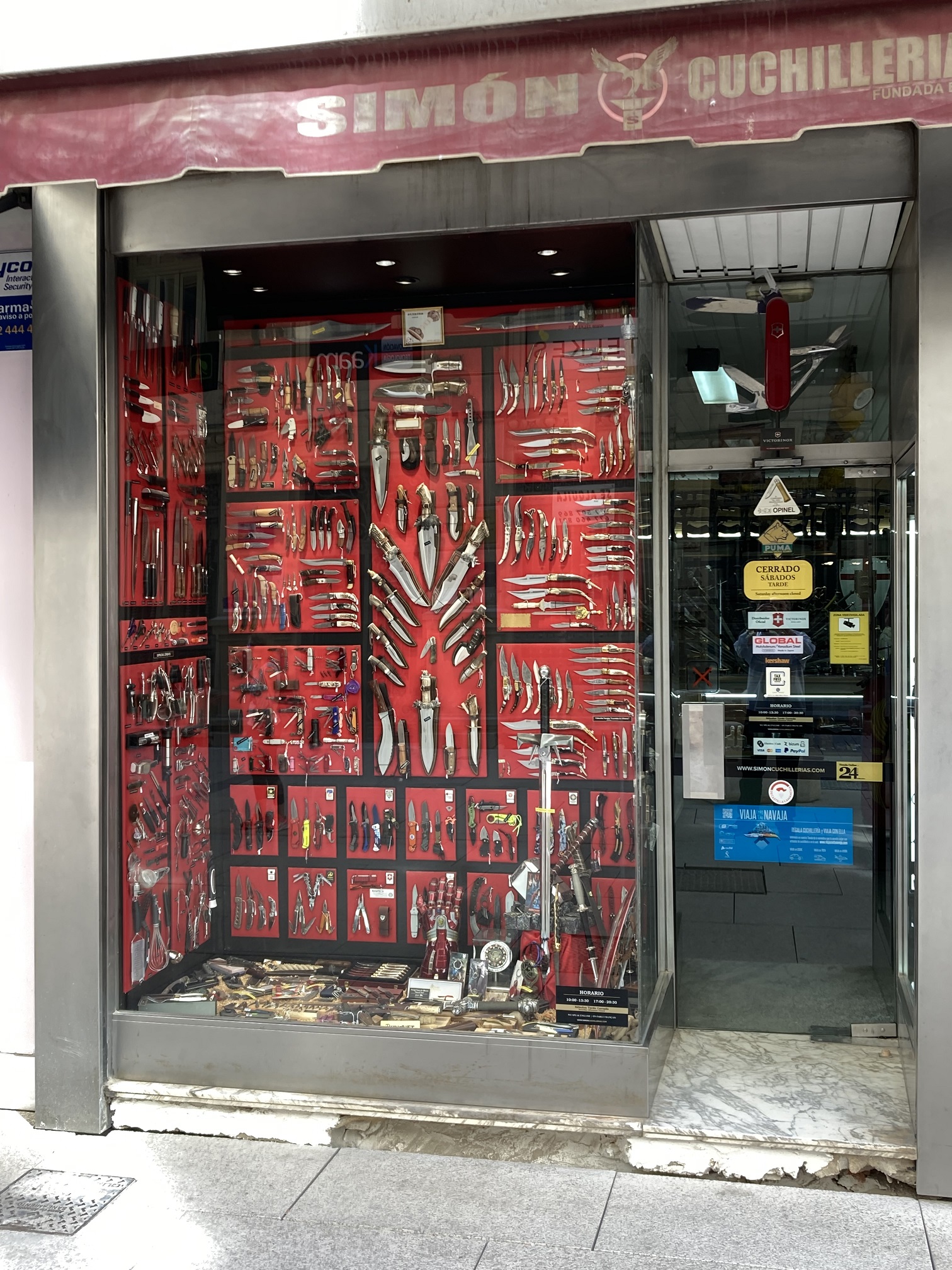 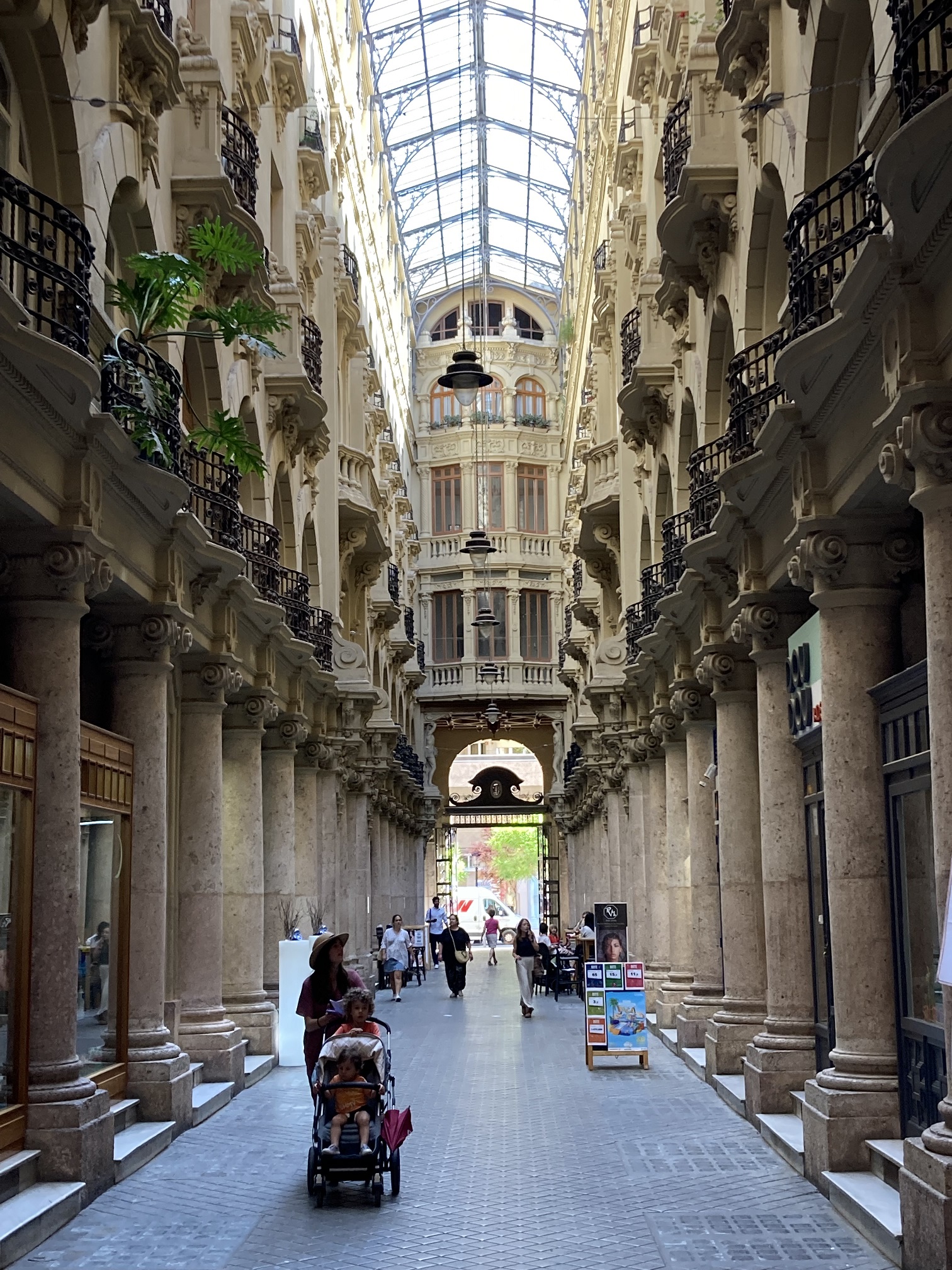 Albacete has some wonderful architecture and a lot of knife shops.
The 12th edition of Ibercut was held in the Palacia de Congresos de Albacete, on the outskirts of the city. The knife show was spread over two floors, with a number of forging demonstrations in the courtyard. In front of the entrance were two "Gastro" tents, for various courses, workshops, and demonstrations, ranging from the correct way to carve a Spanish Jamón, to slow cooking.
Ibercut is not a very big fair - at least not yet. The list of exhibitors included about eighty participants, half of whom were artisans, the other half manufacturers, distributors, suppliers of tools and materials, or organisations such as the Asociación de Fabricantes de Espadas, Armaduras, y Armas Blancas de Toledo (the association of manufacturers of swords, armour and edged weapons of Toledo) and the Guardia Civil. The latter had a very useful display case with different types of prohibited weapons. And there was something that, in our opinion, every knife fair should have: a leaflet called "Travelling with your pocket knife", produced by APRECU, explaining all the rules and regulations about travelling legally in Spain with a knife by car, train or plane. Last but not least, many local and regional authorities were present at the various events in Albacete, all expressing their support for the survival of this unique part of their country's heritage. President Emiliano Garcia-Page Sánchez of the Junta de Comunidades de Castilla-La Mancha not only gave a very sympathetic speech at the Museo de la Cuchilleria (on his birthday, by the way), but also took the time to talk to most of the participants in the Ibercut knife show.
These and the following pages show various aspects of the events in Albacete, with the emphasis, as mentioned, on Ibercut. We do not yet know the date for 2023, but European Blades Mag. will keep you informed. 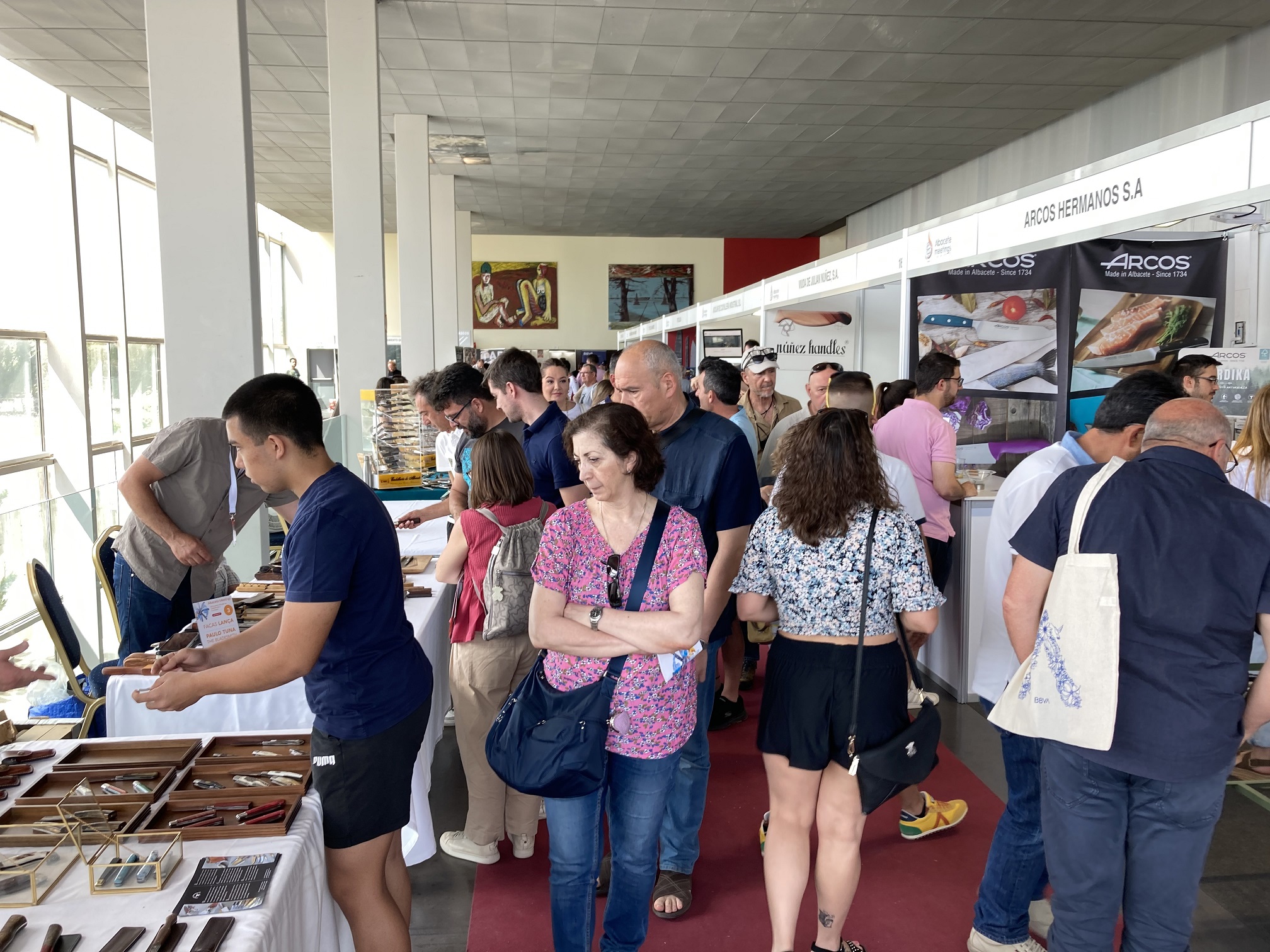 The 12th edition of Ibercut was well visited. 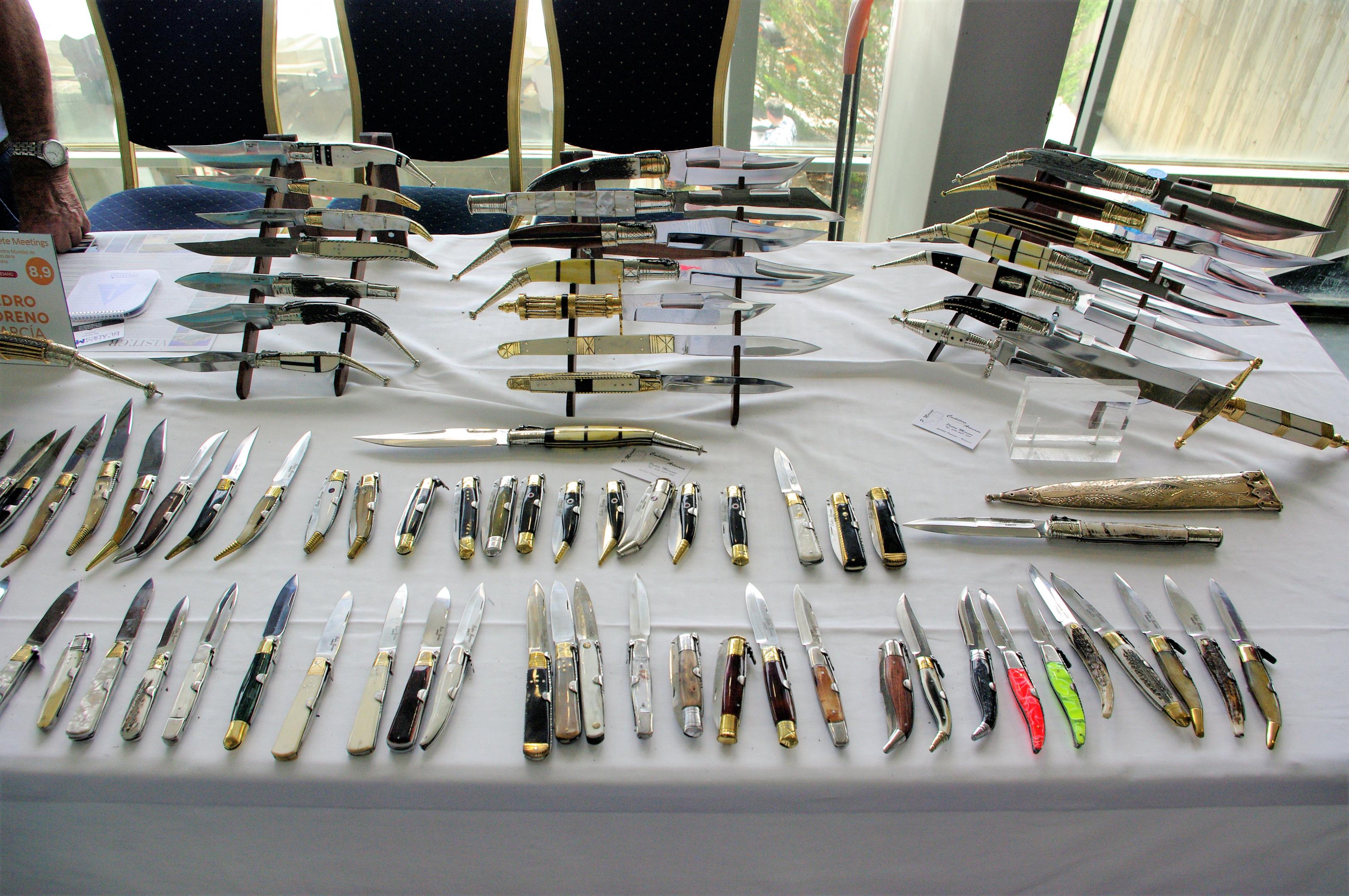 The table of P. Moreno, maker of traditional Spanish knives. 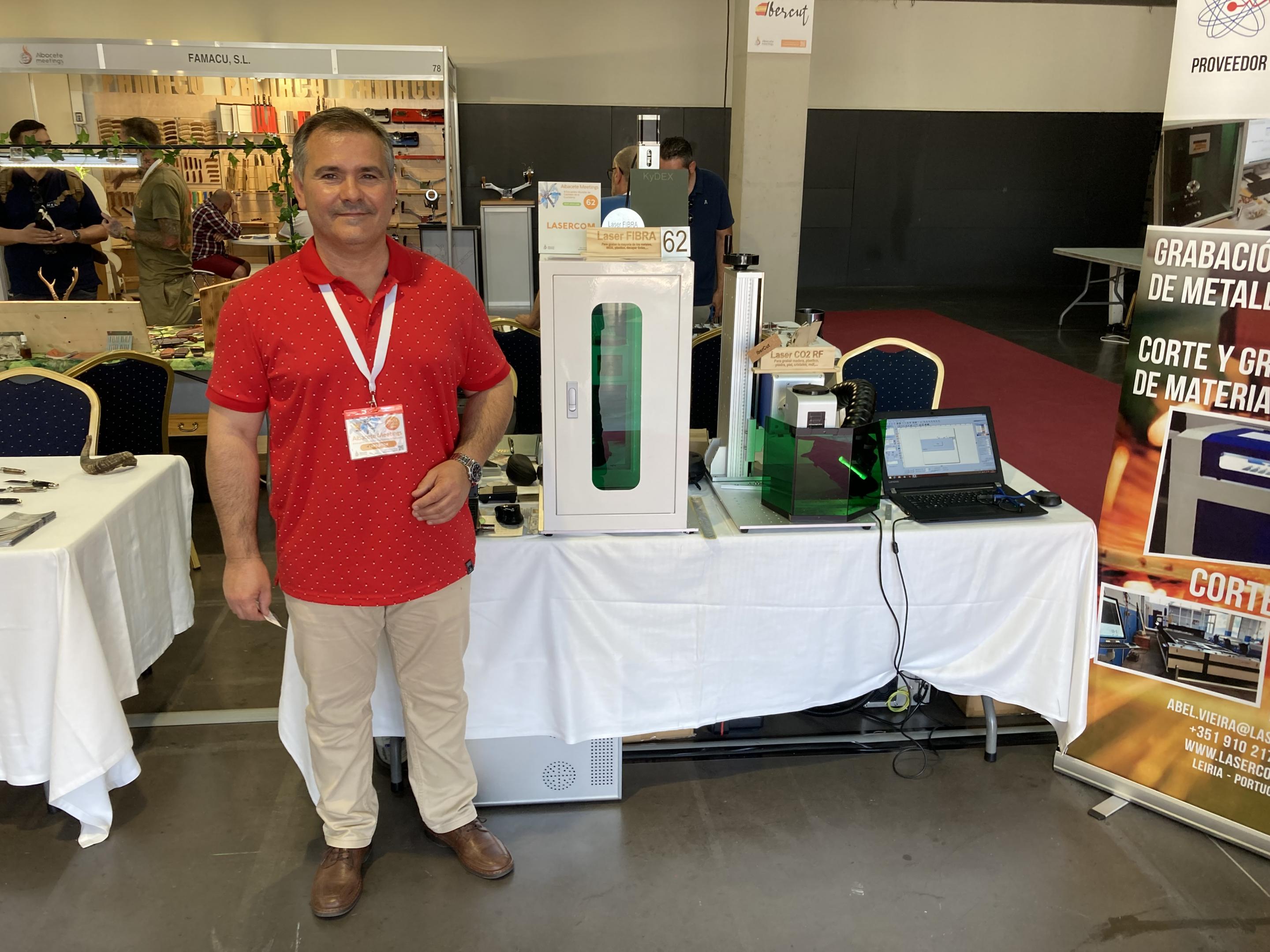 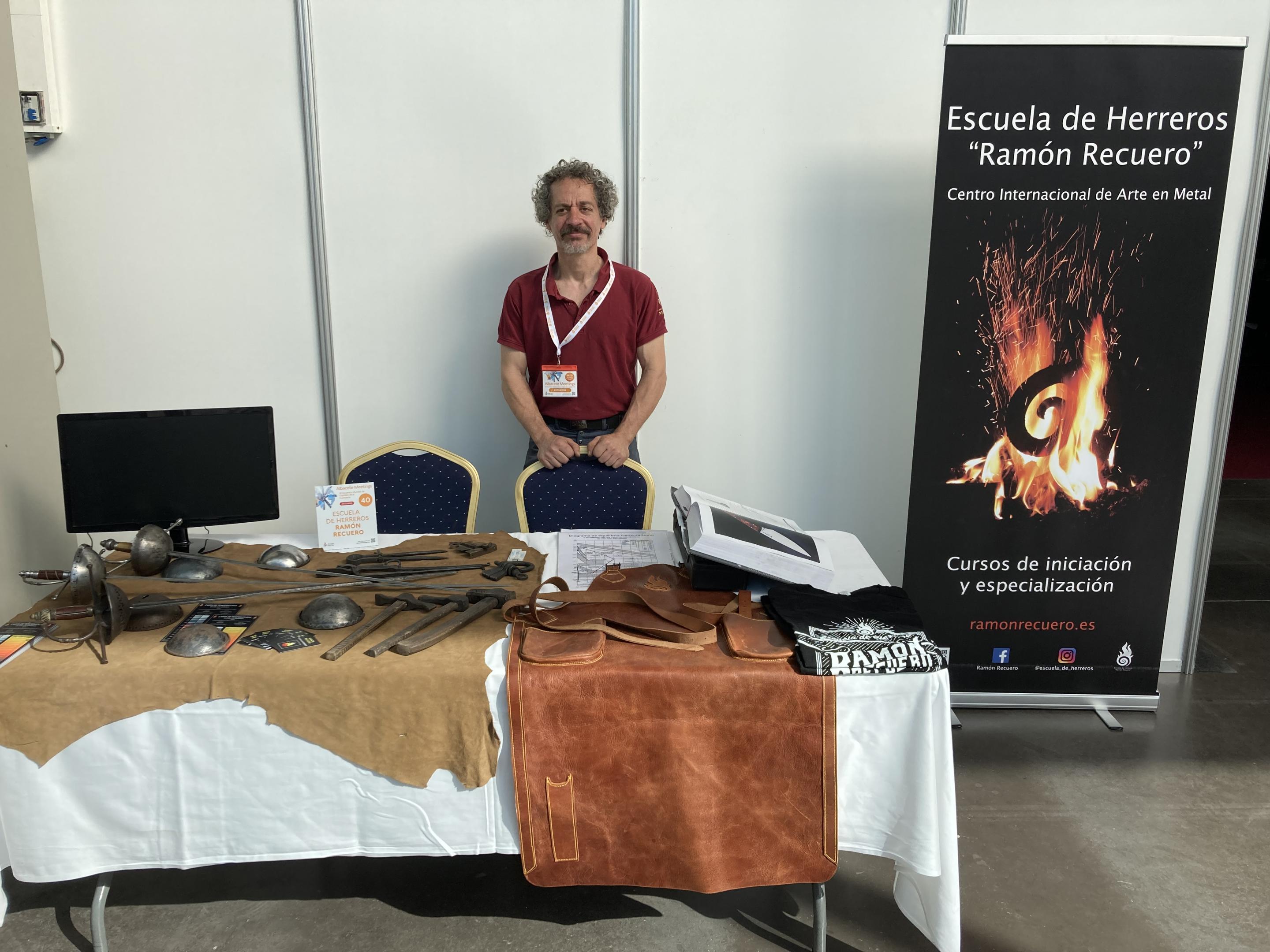 The stand of the International School for Blacksmiths in Toledo.

A hunting knife by Raul Torres Calzas. The 10 cm blade is VG10 steel, the bolsters are Stainless 301
and the handle is Sambar. The sheath is vegetable tanned leather. 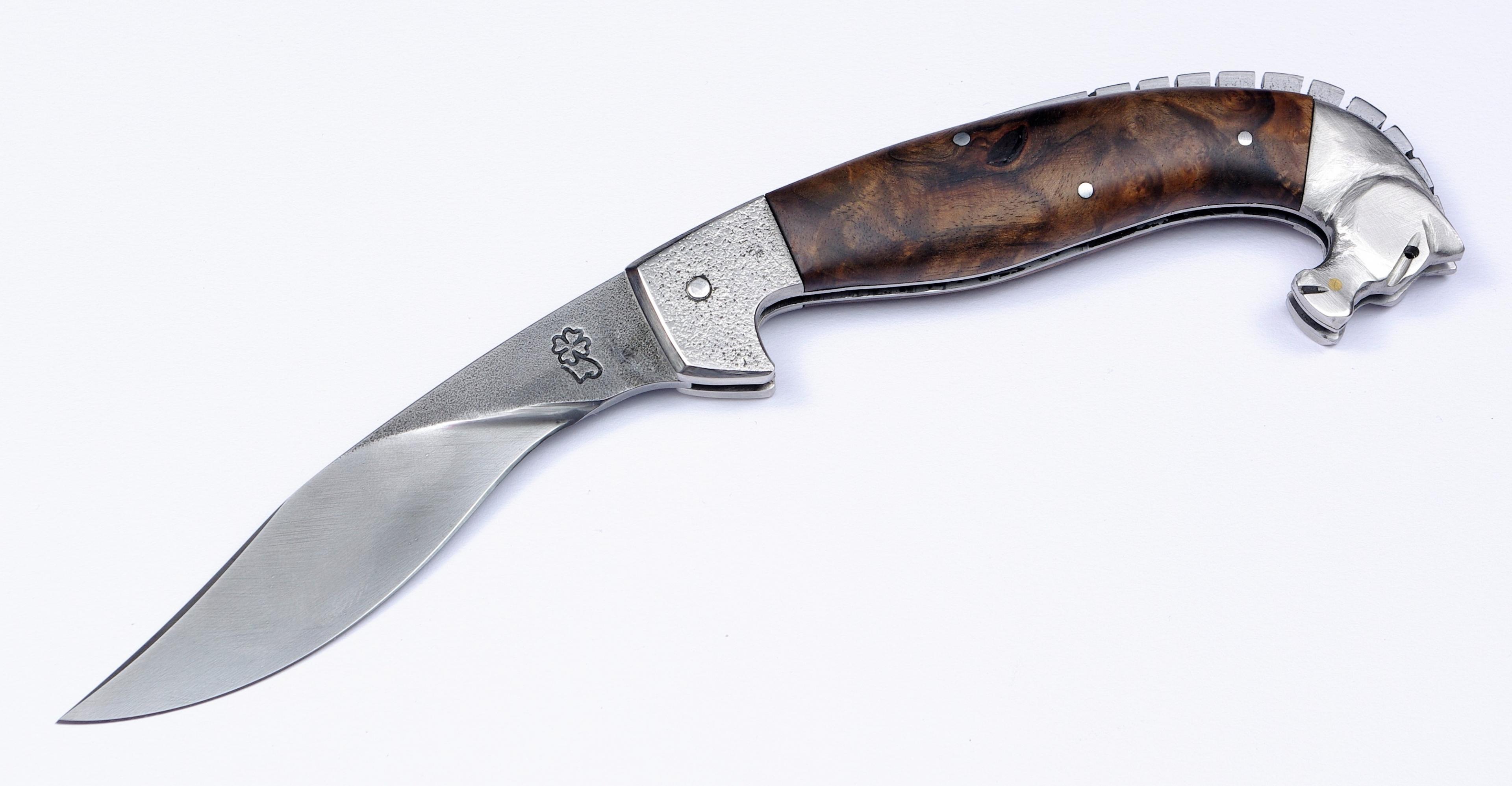 A Falcata folder by Carlos Norte from Portugal (Lombo do Ferreiro). The 10 cm blade is made from K720-O2
steel, the handle is Turkish Walnut. The knife is inspired by the Falcata, a pre-Roman Iberian sword. 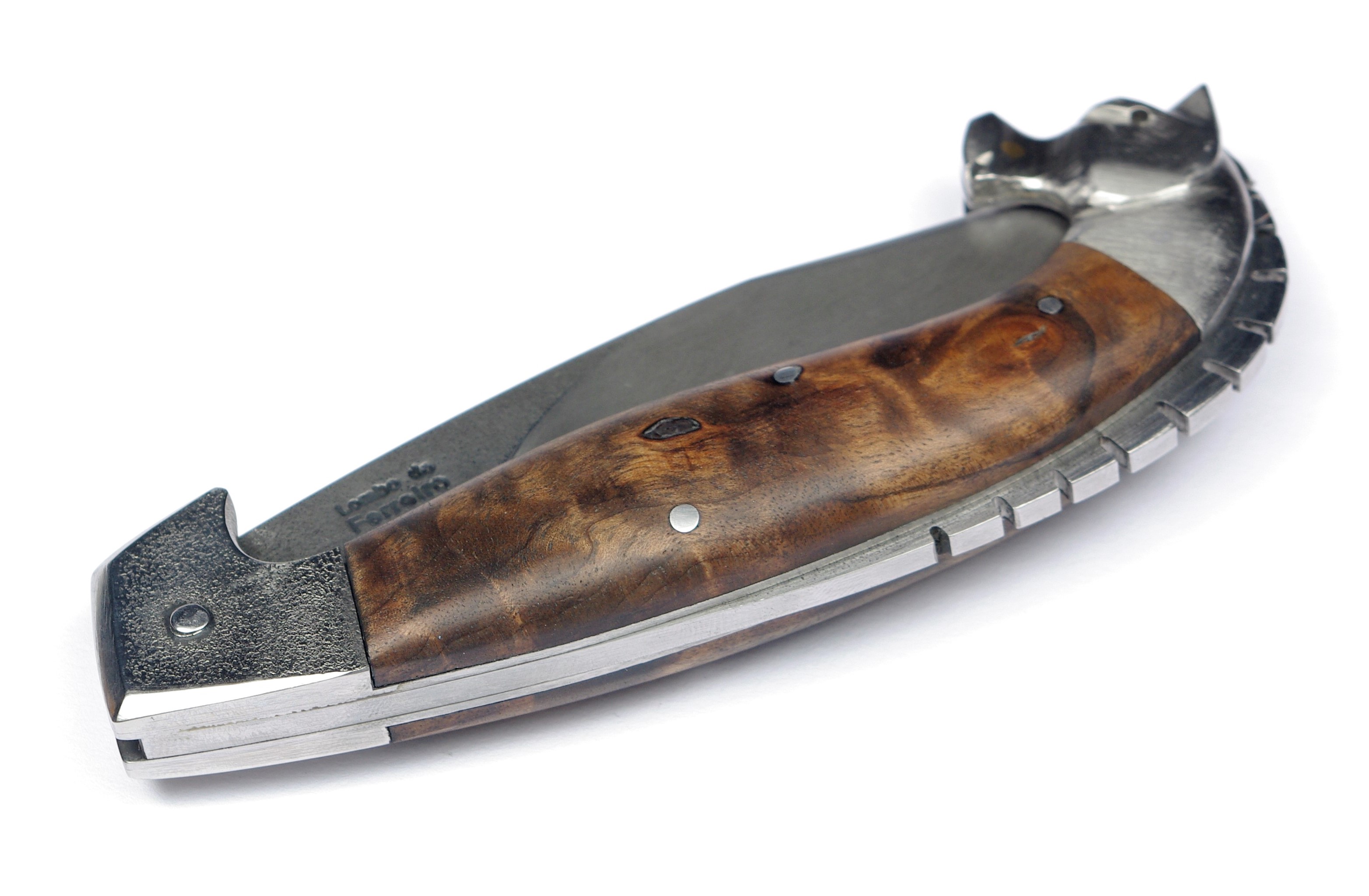 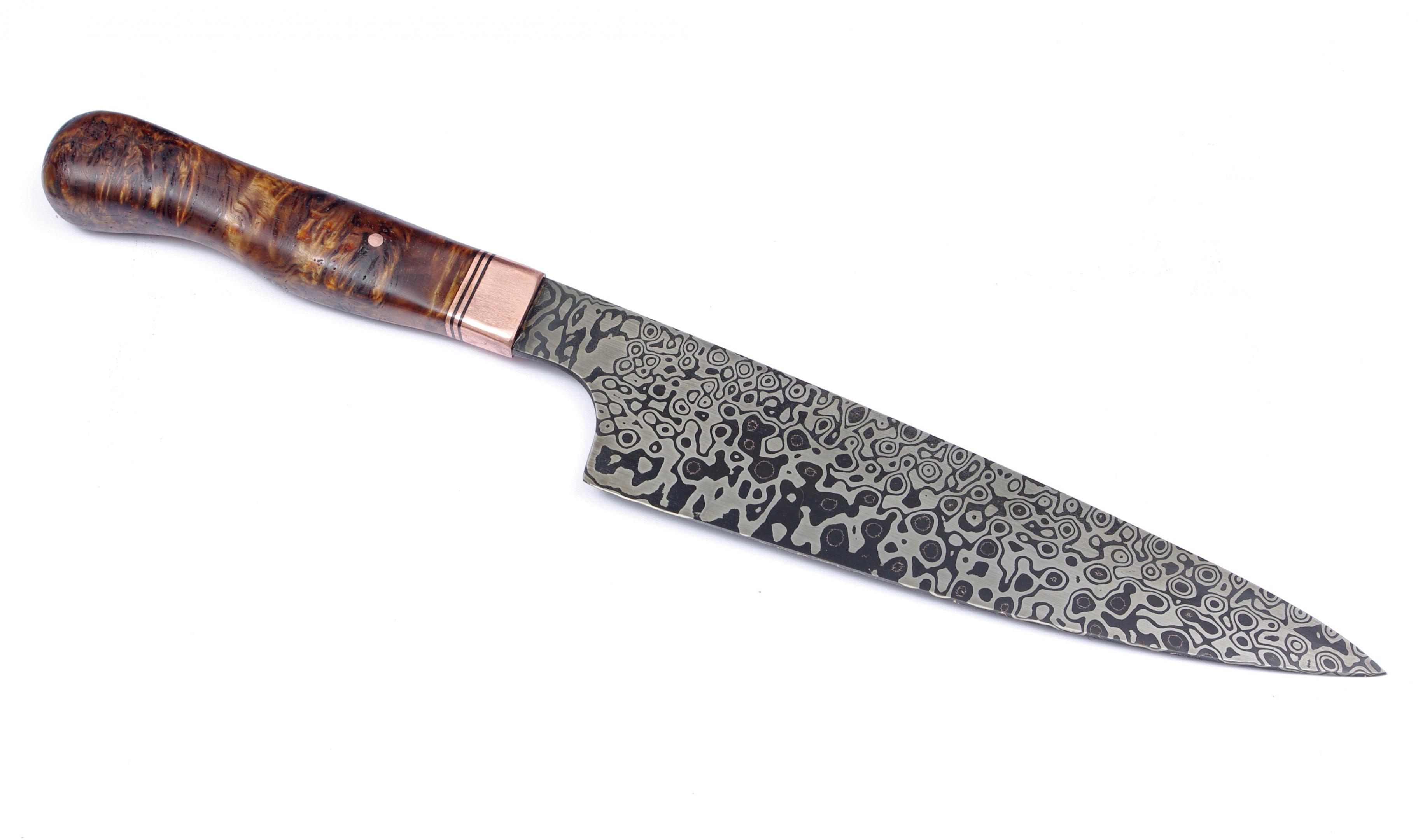 A Navaja by Diego Castillo Cañadas with Ivory handles. 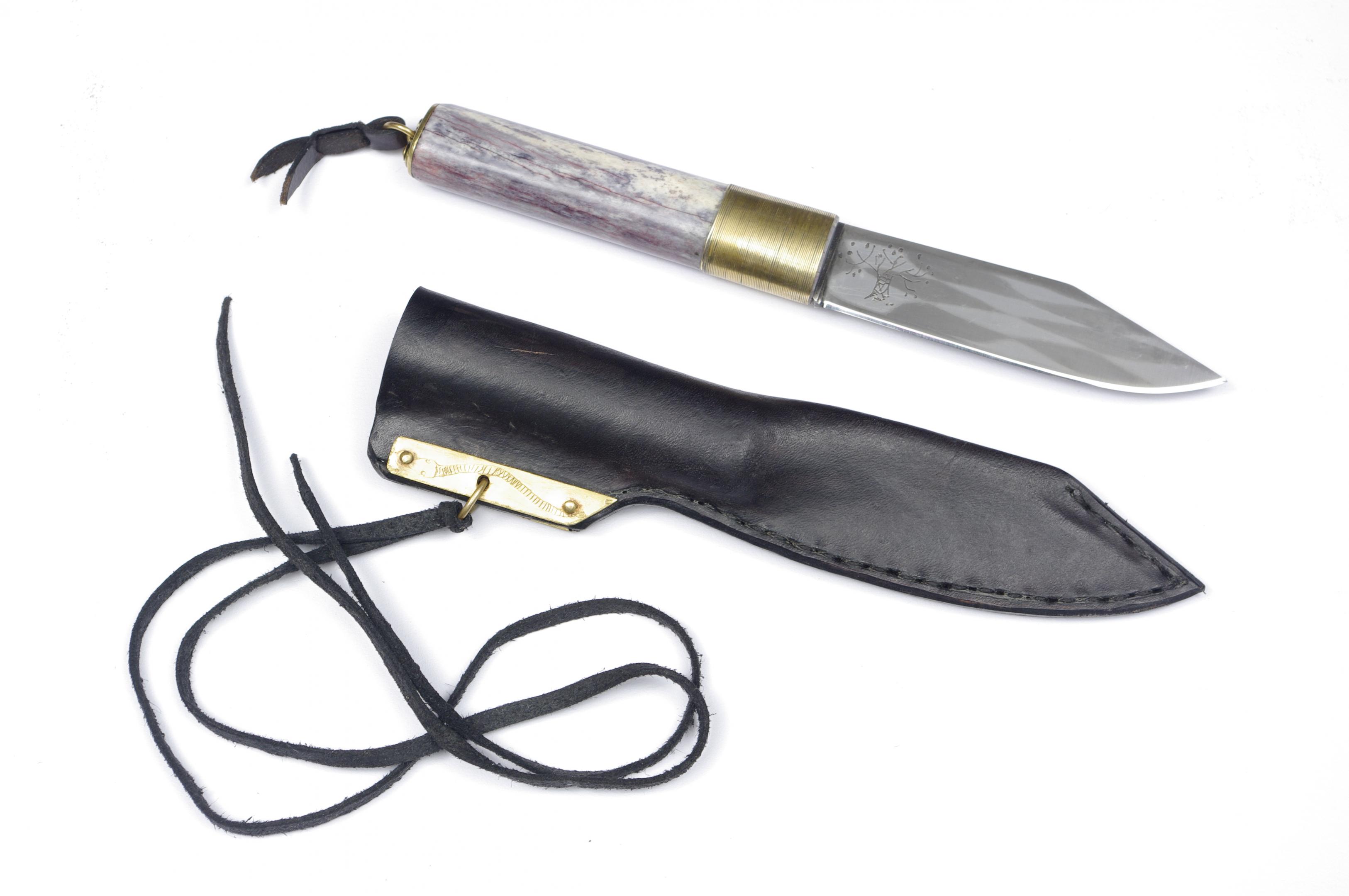 A “Sax de Mujer” by Eduardo Cadelo. The knife has a Damask blade and a brass and deer bone
handle. Overall length is 205 mm. 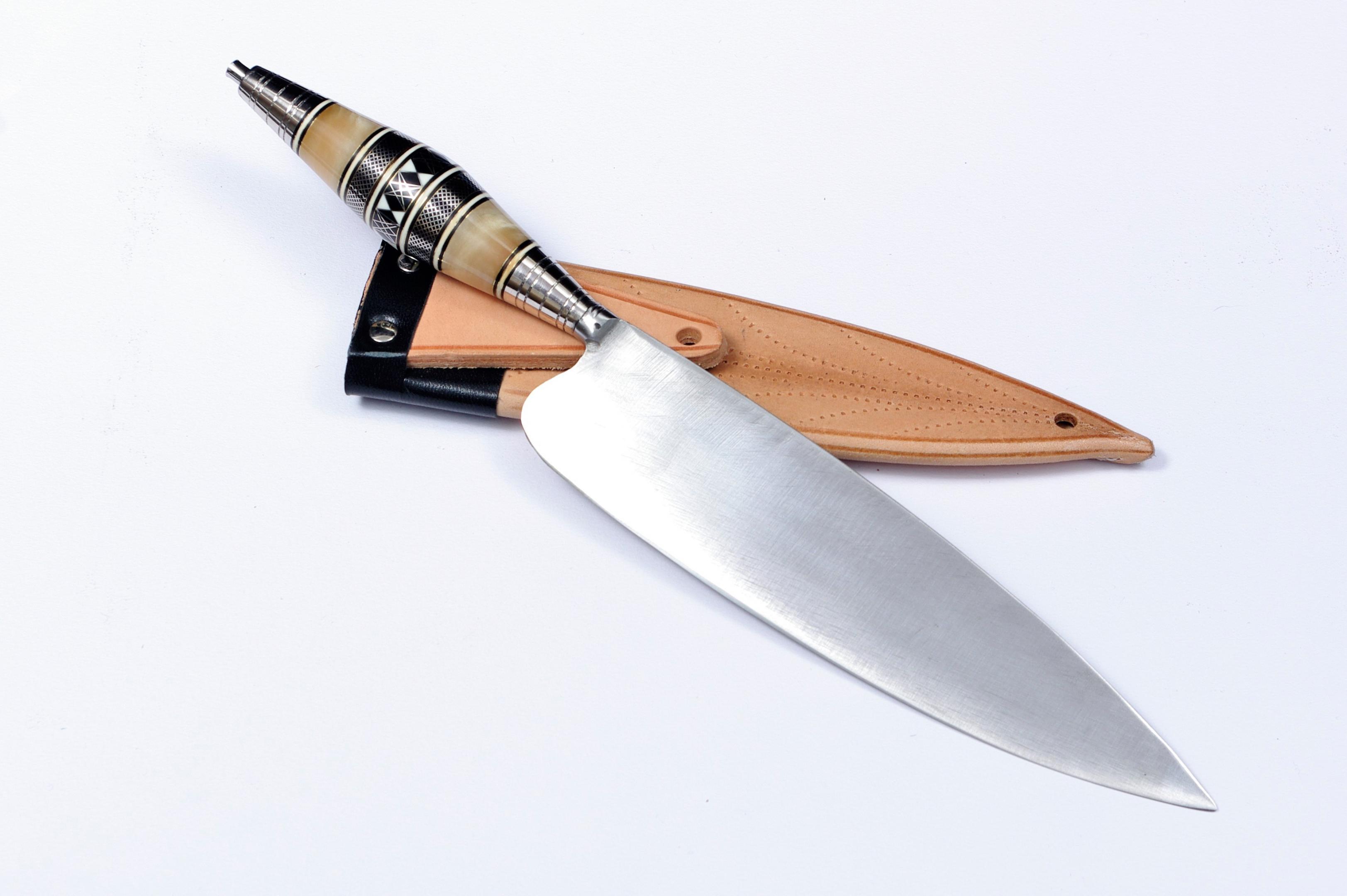 Spain has several distinct regional styles of knives. One of these is from the Canary Islands, which are
made by Daniel Castro Hernandez (El Pete). The 19cm blade is made from F.114 Carbon Steel. The
handle is horn, and intricate inlays of different metals. 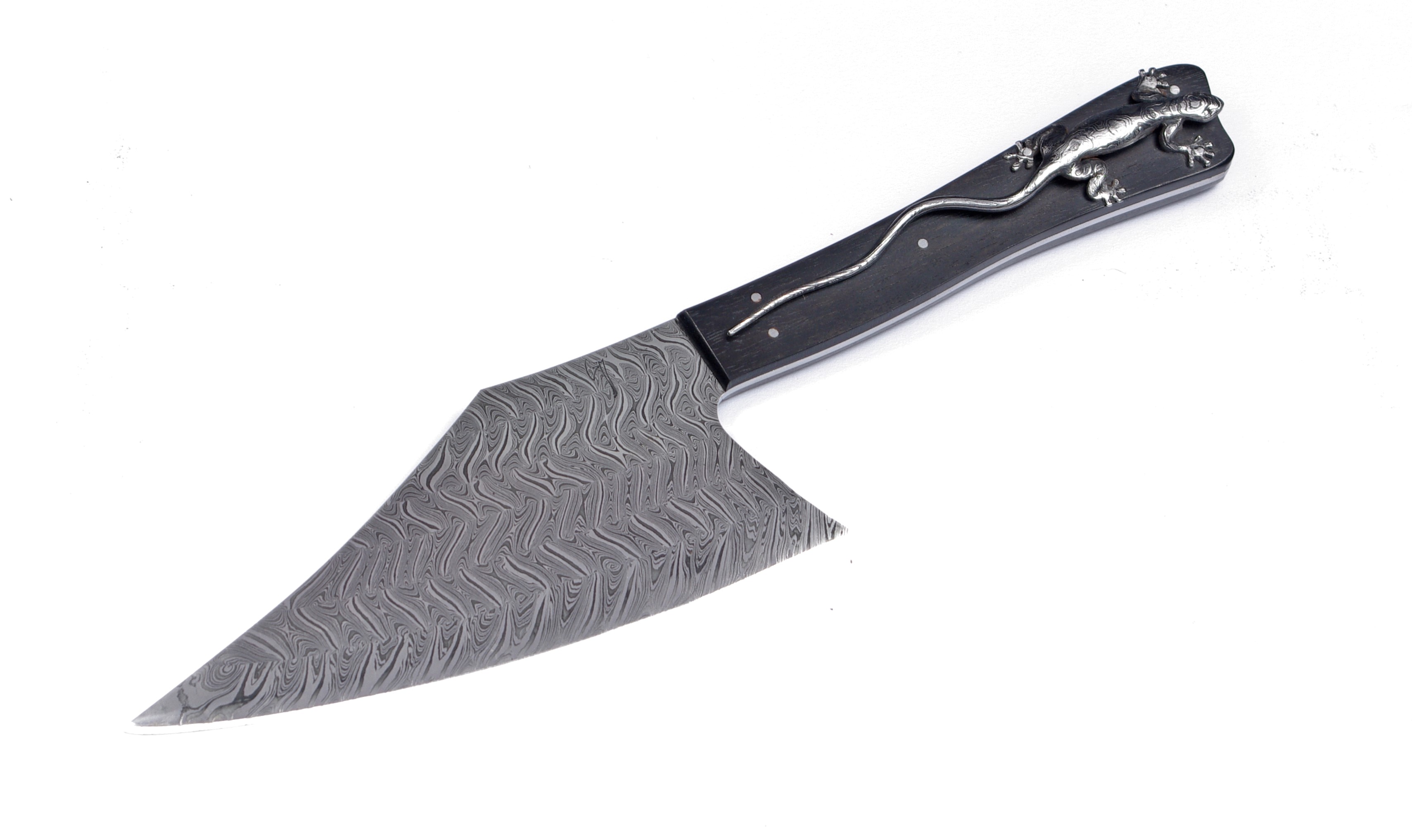 The “Gacha del Gecko” (the Gecko’s hatchet) by Guillermo Mendoza. The blade is multibar torsion Damask,
the handle is Ebony, with a hand-forged and sculpted Gecko. 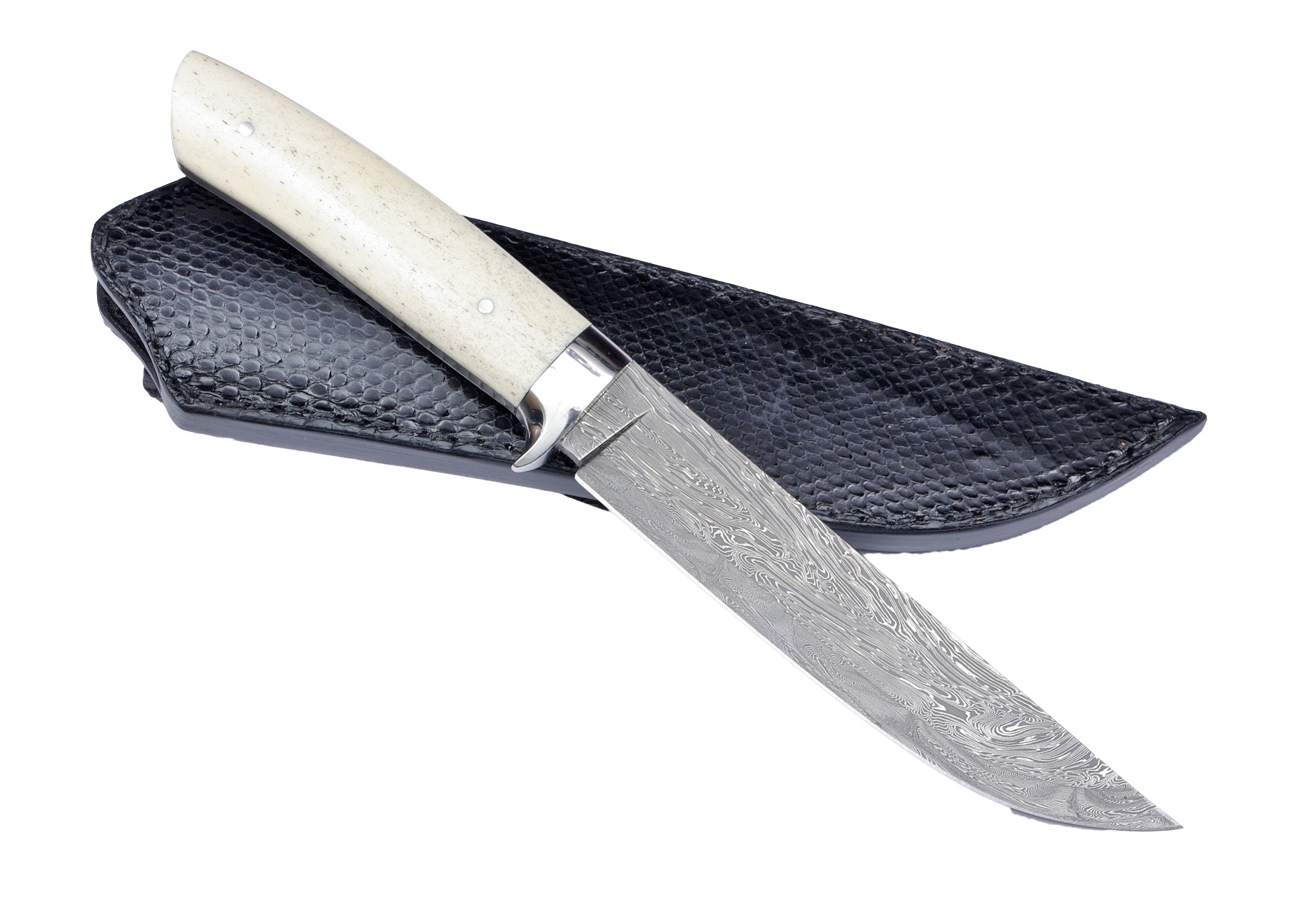 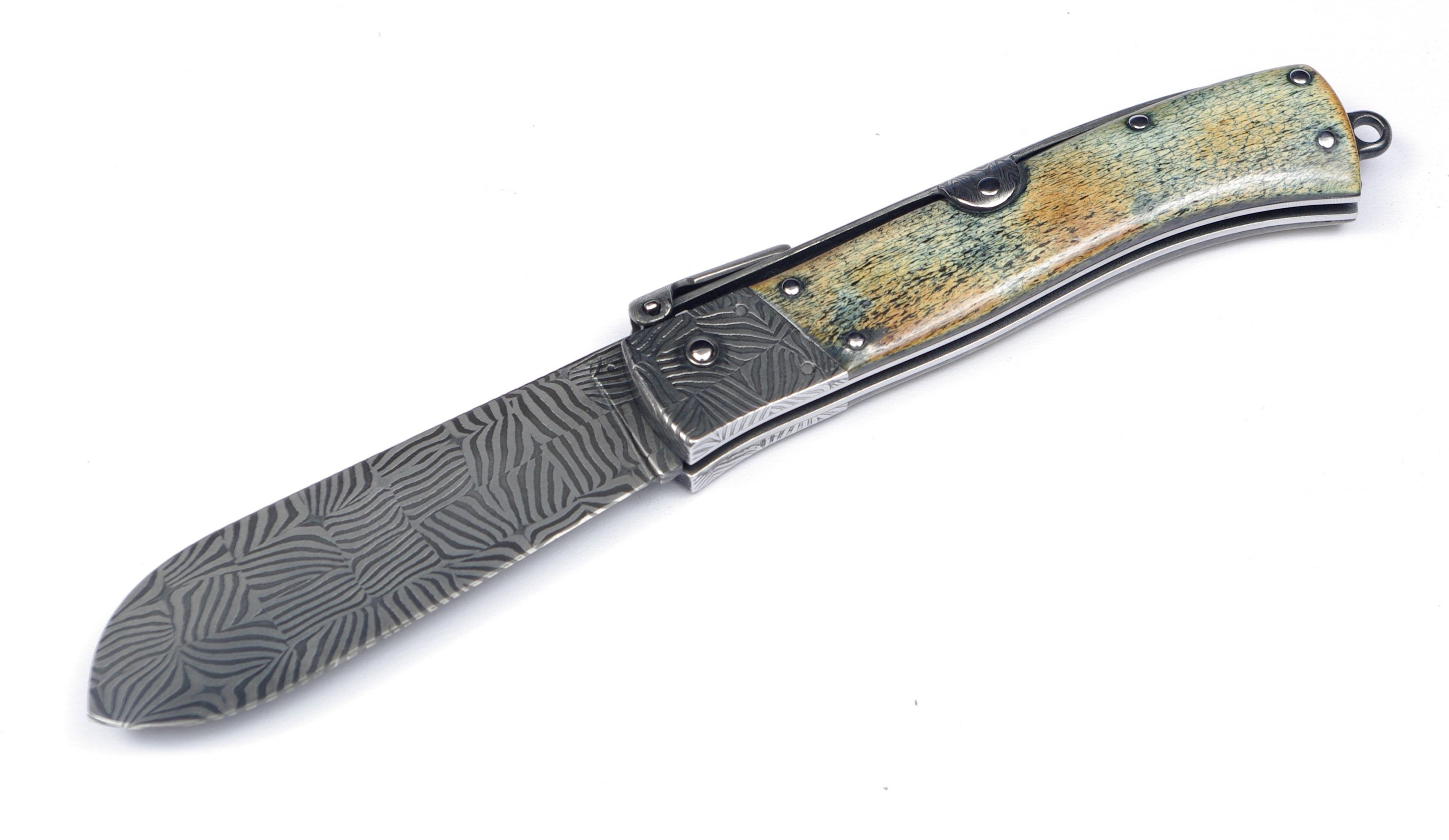 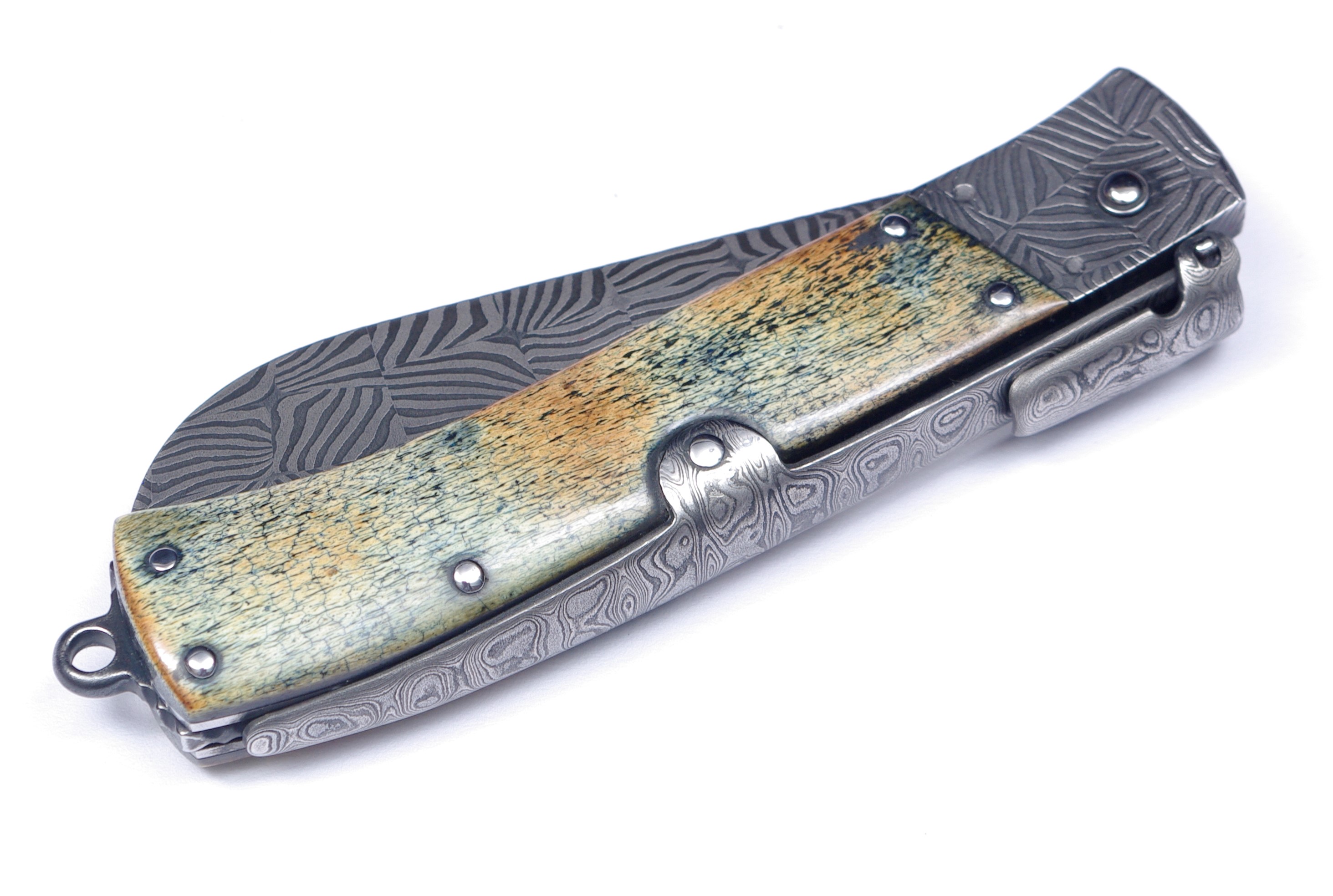 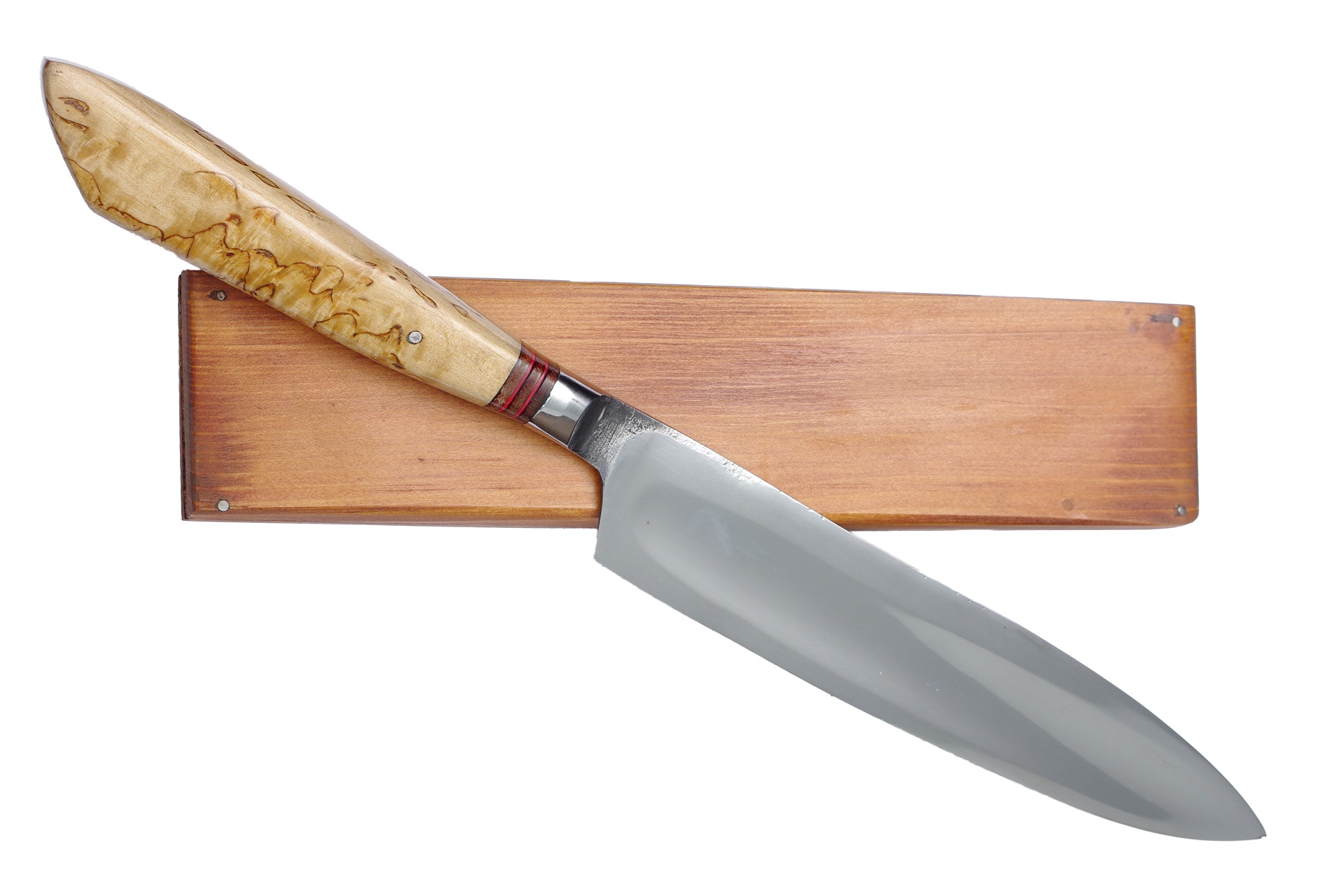 A folding knife by Juan Andrés Barbero García. The blade is MoVa steel, the handle is Buffalo and Nickel Silver. 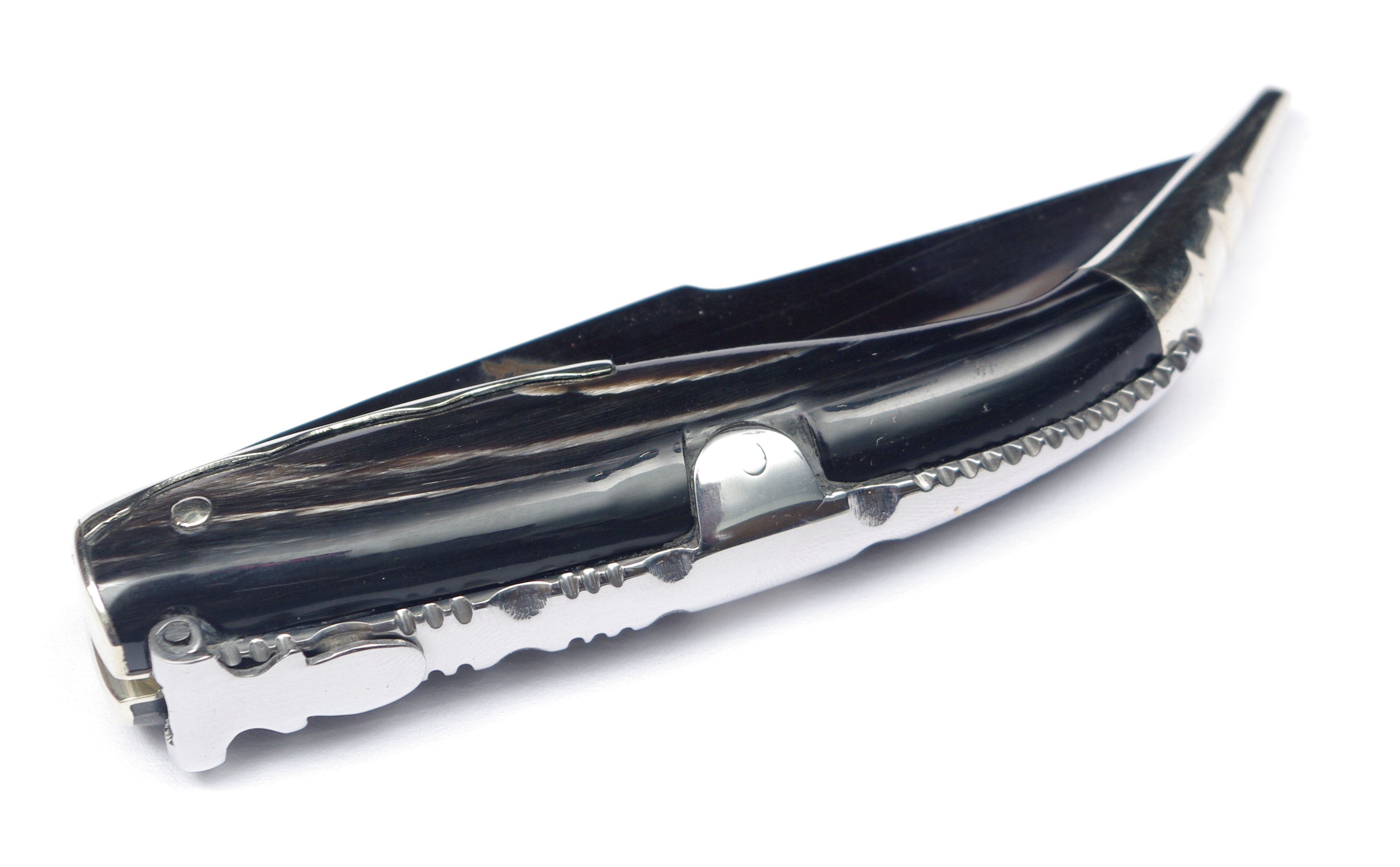 The knife from the cover: a “Navaja Colmillo” (fang knife) by Juan Luis Vergara Gallego (jr.). The blade is
Inox Damask, the handle is Warthog tooth. Overall length is 19 cm. 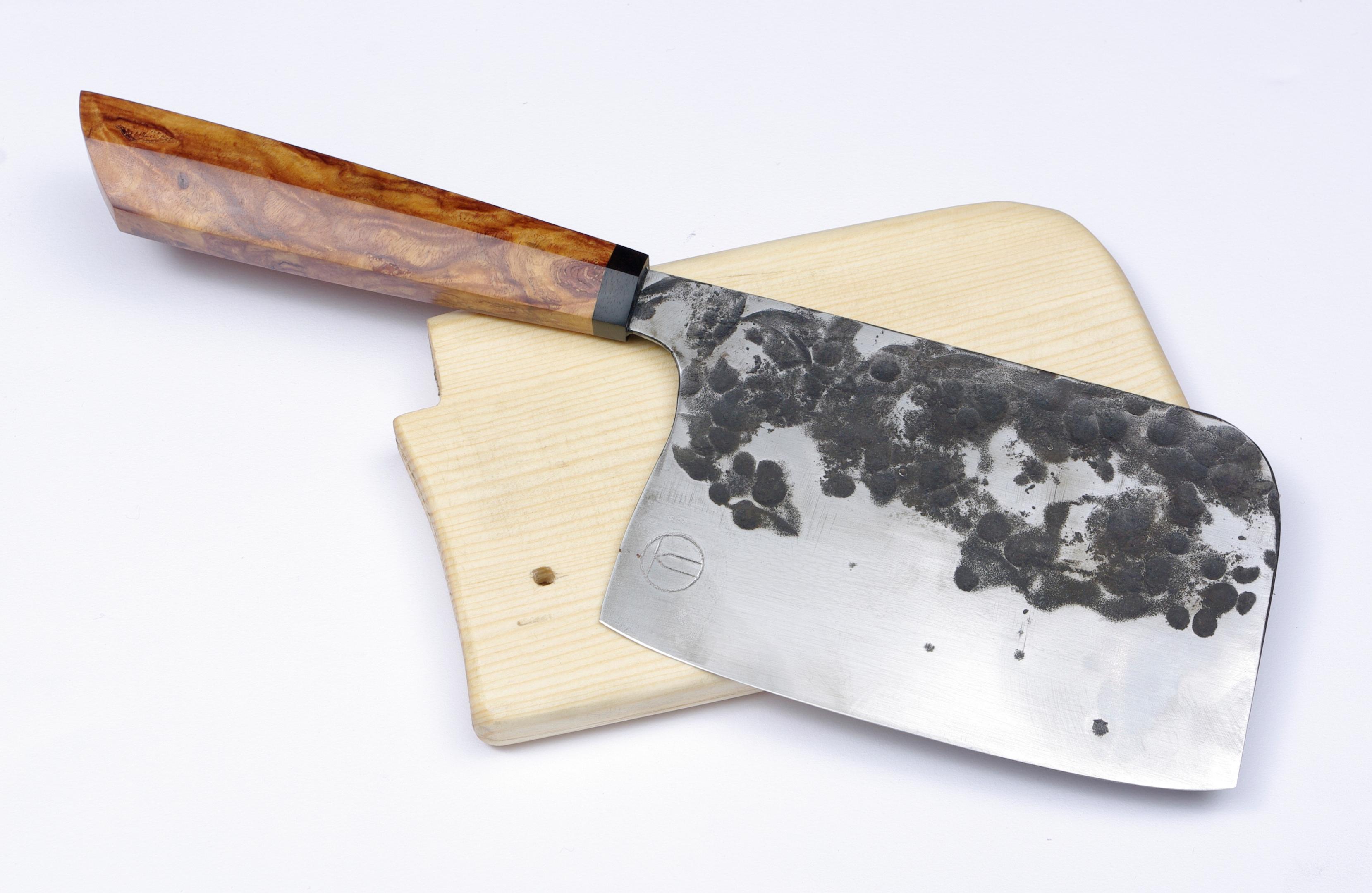 Nicolas Mora Camuñas calls this knife an interpretation of a Chinese Cia Dao (a Chinese cleaver) in
Japanese style. The 16 cm blade is Böhler K720, the handle stabilised Olive wood. 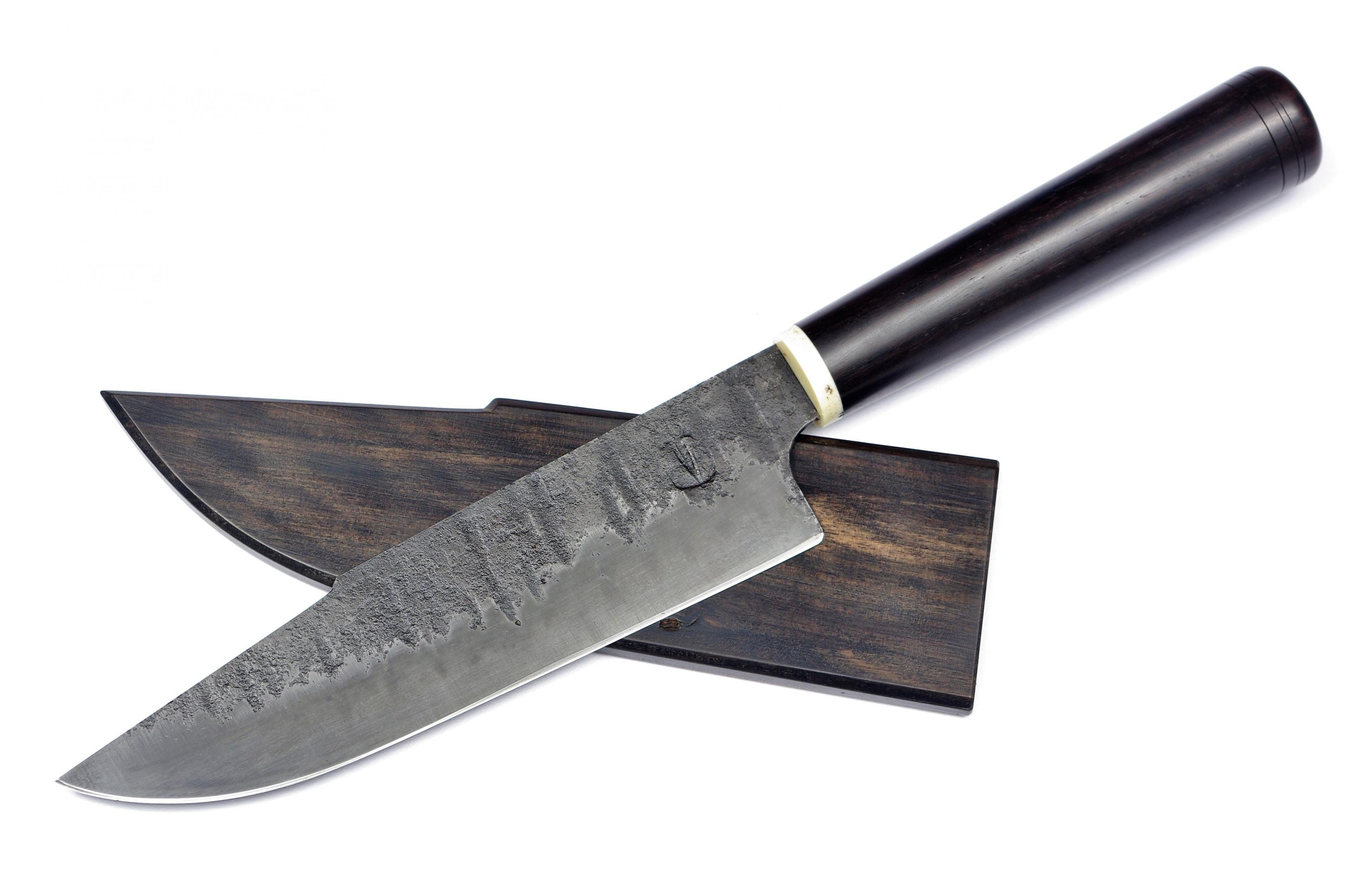 “A Tradicional” by Paulo Tuna (The Bladesmith). The 165 mm blade is K720, the handle and the sheath
are Ebony wood. 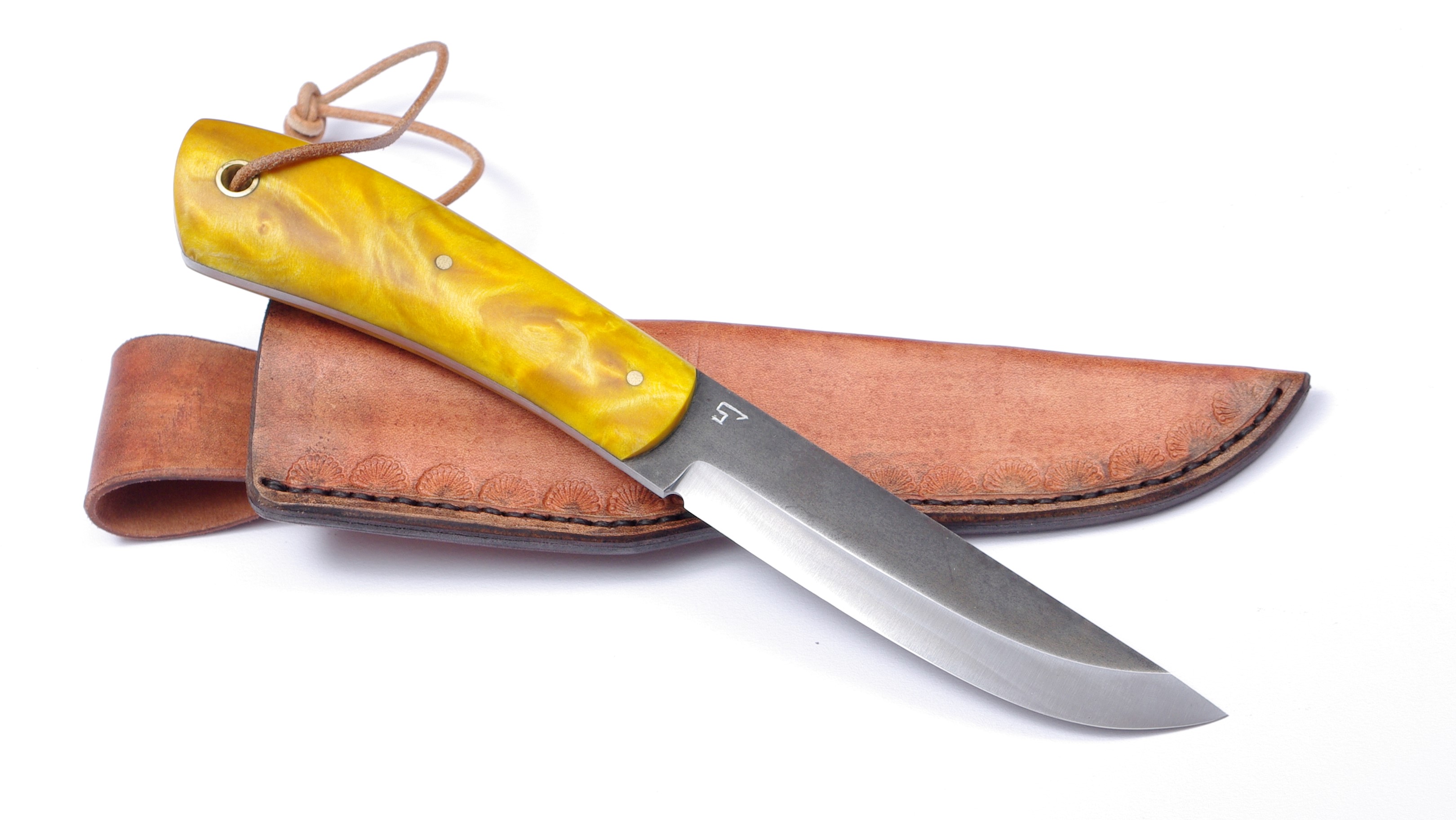 A bushcrafter by Peter Sober (Soberknives). The blade is O1 tool steel, the handle is stabilised Poplar fork.

Italian Master Swordsmith Puirluigi Ponzio is specialised in Japanese blades. This one is a Gyoto with
Fudo Myo engraved on the blade. The blade steel is Ozoshigane, the handle is wood.
Our sponsors
Advertisements
Dit is een geprinte versie van de publicatie op