Patents: A 'Pocket knife in the shape of a revolver'

There are plenty of examples in history of a knife being combined with a pistol or revolver, sometimes even with a knuckle-duster. In 1953, the private ownership of firearms was prohibited in Germany. Such a combination was out of the question. However, Carl Wittgens had thought of something that looked a little like this: a pocket knife in the form of a revolver.

On April 11, 1953, knife manufacturer Carl Wittgens, Dültgentalerstrasse 25 in Solingen Wald, Germany, applied for a so-called  'Gebrauchsmuster' for a 'Taschenmesser in Form eines Revolvers' (Pocket knife in the shape of a revolver). In German and Austrian patent laws, a 'Gebrauchsmuster' is a somewhat simplified patent, with a shorter maximum lifetime, and some limitations - only products can be patented.
According to the description, the idea itself was not new. Knives in the shape of a firearm were already known at the time. However, Wittgen's invention mainly concerned two aspects of the construction: a hook (11) which kept the retracted blade closed and only released it when the 'trigger' was pulled, and a spring (7 and 18) which caused the blade to open automatically after pulling the trigger. According to the description, the older models known at the time still had to be opened completely by hand.
In addition, Wittgens had added a safety device, a bit like the Axis lock discussed elsewhere in this issue: at the front of the frame, there was a transverse pin that could be pushed forwards and backwards by means of two laterally protruding knobs. In the rear position, the pin lay under the arm of the 'trigger', blocking it.
The whole device consisted of two metal side plates, with two spacers, and between them the mechanism with a couple of springs and riveting pins. Simple and cheap. The most striking about the design, at least in contemporary eyes, is its lack of ergonomics. You can imagine such a revolver knife, but wouldn't it be better if the blade opened forward instead of backwards? And how could to hold it to use the knife? On the other hand, 1953 was a very different time. Shortly after the war, people may have been fond of this kind of gadgets. 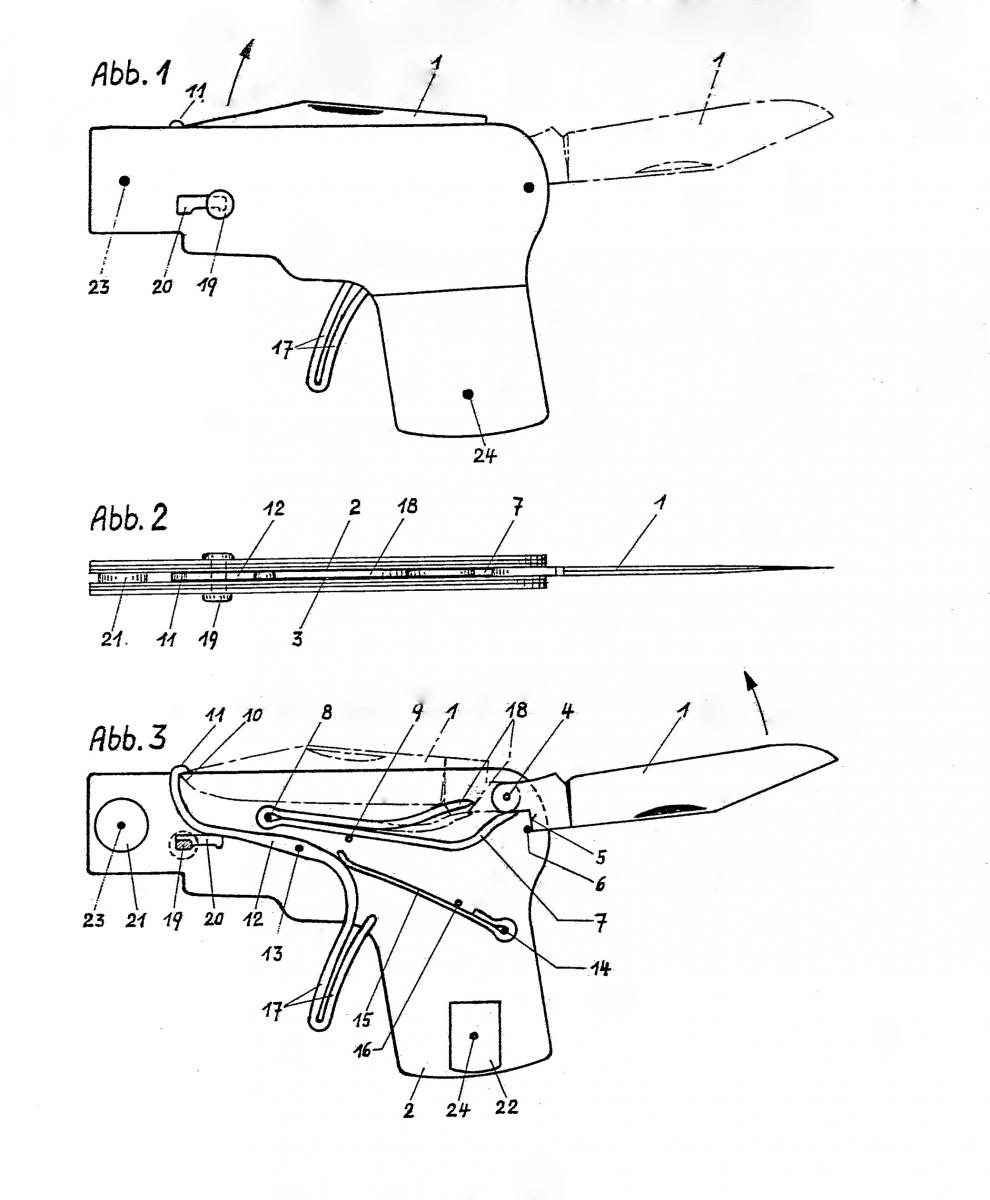